Hey, maybe you have heard about this controversy over a graduation speaker at Michigan law? Or maybe not, because although this is the kind of thing Autostraddle would’ve talked about a few weeks ago, we didn’t because this story is a little complicated. Because of me. See, I go to Michigan Law, and in December, I became the co-chair of the school’s LGBT organization. I’ve been on the front lines of the graduation speaker controversy from the beginning, and this seems to be the most optimal place from which to tell this story. 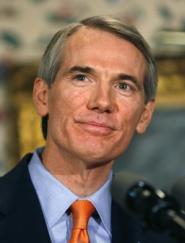 So what happened? Well, three weeks ago, Michigan Law announced that Ohio Sen. Rob Portman would be their graduation speaker. Almost immediately, members of the graduating class began expressing disappointment in the choice because of Sen. Portman’s abysmal record on gay rights. He voted for the Defense of Marriage Act, for a constitutional amendment banning gay marriage, and for a ban on gay adoption in D.C., to name a few votes. His record on many other issues has been consistently conservative. But students focused almost exclusively on his votes against gay equality.

The movement against Sen. Portman grew from there. We held a bunch of meetings and exchanged countless emails. More than 300 students and more than 200 alumni signed letters to the law school dean expressing their opposition. Many more sent the dean personal messages. The efforts were about as effective as these things usually are: the administration listened and apologized for causing a rift in the class, but made it clear that Sen. Portman would remain the graduation speaker.

Our next step was to design a protest that would be visible at graduation. We started taking orders for rainbow tassels and buttons to be worn at the ceremony, and about thirty faculty members and 150 students ordered some rainbow gear. The more controversial option involved a walkout during Sen. Portman’s speech.

Graduation day finally came this past Saturday. Before the ceremony, some students and I handed out pamphlets with rainbow pins on them, explaining the protests. Some people refused them or ripped them up, but for the most part everyone was supportive. For every person that handed it back, there was a student that took a handful of pamphlets, shoved them into their parents’ hands and told them to put on the pins. 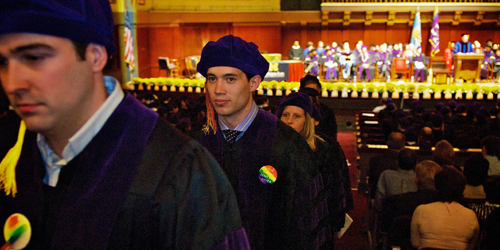 photo by Andrew Potter, Between the Lines

The walkout was scheduled to start when the senator got ready for his speech. We had estimated that maybe 40 students would join in. There was always the fear that in the heat of the moment, people would decide not to rock the boat. Instead, people decided they should join their classmates. In all, over 100 students (1/3 of the class) walked out of their own graduation. Check out this video from PrideSource, which shows the mood in the lobby during the protest:

I have had my qualms with the It Gets Better campaign. Things don’t get better for some people. Not everyone can go to college or move to San Francisco. Not everyone has the option of coming out or of avoiding bigots. Growing up and reaching your 20s does not automatically make life as a queer person any easier.

Still, in the big picture, Dan Savage has a point. That liberal rallying cry — the arc of history bends toward justice — is true in many ways. It can be difficult to see that sometimes, through all the disheartening elections and the hate speech and bullying and suicide and the Tea Party and Fred Phelps. But I think we are making progress.

To my generation, LGBT equality is not a political question anymore; it is an issue of basic human rights. Even people far beyond the boundaries of the queer community are starting to understand our cause. The protests at Michigan Law’s graduation are just a small example of the generational shift we are witnessing right now.

Don’t get me wrong, I realize that Ann Arbor, U of M, and in fact most law schools are uniquely liberal places. Queerness is much more accepted here than in most towns in America. And Michigan students have been protesting conservative speakers for decades, like Henry Kissinger in 1975; the undergrads protested Republican Gov. Rick Snyder as the commencement speaker this year. In other communities, people protest because their schools give honorary degrees to President Obama (and not because it took him so long to overturn Don’t Ask Don’t Tell). Catholic organizations chastise Catholic universities for honoring people who have expressed support of limited access to abortion.

The difference between those protests and the one at Michigan is the message. Students made it clear from the beginning that their objection was not political, even though Sen. Portman has made plenty of other objectionable votes. It was not about liberal vs. conservative. Their objection was deeper. As one of my classmates put it on his blog: “For the next generation of lawyers, this is not even a debatable issue.” It means something that such a large group of people at Michigan cared so much about a symbolic slam against LGBT people. Communities like Ann Arbor are canaries in the coal mine; when we reach a critical mass of people who will not tolerate discrimination based on sexual orientation, maybe the rest of the country isn’t so far behind.

Of course, there will always be places that hold out and resist tolerance at all costs. The fight never ends; we still grapple with racism and sexism on a daily basis, and I suspect we will still be dealing with homophobia for decades to come. The point is, though, that the people who walked out of Michigan Law’s graduation are the people who will be in charge in ten or twenty years. It may be elitist, but the fact is that lawyers are one of the groups that have a lot of power to make laws and set agendas for the country. Winning over the legal profession is a really great step for the gay rights movement. We will have to work a lot harder to fix the small-scale instances of homophobia, the stares when you walk down the street holding your girlfriend’s hand or the raised eyebrow from the hotel clerk booking a one-bed room for the two of you. But fixing the laws of this country and creating an environment where the government does not sponsor discrimination against LGBT people goes a long way toward achieving equality.

A few weeks ago, a friend emailed me to say that no matter what happened at graduation, she already felt like she won, and it sums up my feelings perfectly: “For the first time in my life, I’m in a place where I know that the majority of people support my rights, and that is a new and beautiful feeling.” 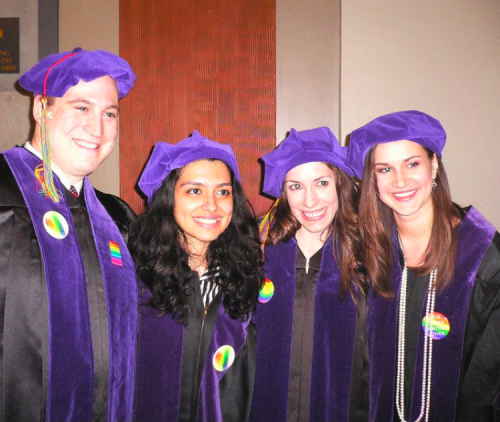