Did you burn through all 13 episodes of Orange is the New Black in the span of two days or less? Have you recently felt listless, tired, and disappointed with the fact that Samira Wiley is not on every television show ever? Do you find that you can no longer have strong emotional reactions to anything but the premise of a women’s prison?

You may be experiencing Lesbian Prison Show Withdrawal Syndrome, and it’s a very serious condition that needs immediate treatment. LPSWS has been sweeping through the queer community like wildfire since everyone and their girlfriend marathon watched Orange is the New Black, and now many are asking if there’s a cure in sight.

Fear not, LPSWS sufferer! Go ahead and download yourself a dosage of the Aussie prison drama Wentworth and see what a healthy and happy future awaits you!

In all seriousness, I stumbled upon the prison series Wentworth after it, unsurprisingly, showed up on my Tumblr dashboard. Well, that looks intriguing, I said, as I clicked through the gifset of attractive ladies making out to find its source. Indeed, it was Wentworth, the prison drama from down under. I downloaded the entire show, and my girlfriend and I watched it obsessively, finishing the first season in three days. The worst thing about the show is that I watched it before I watched Orange is the New Black, so by the time I got to the American version of a show about women in prison, I was bewildered by how happy and non-threatening and seemingly fun the conditions were for Piper and Co. I remember watching the first cafeteria scene and biting a throw pillow, waiting for Yoga Jones to use her fork to stab Piper in the face.

That’s what Wentworth does to you. It makes you feel like the stakes are high, the consequences are real, and prison is not a mostly safe and cool place for white ladies to have their minds expanded. It makes you feel something deep and visceral and intense. Is it gritty and scary? Absolutely, but it’s worth all the emotions it’s going to evoke. Here’s ten reasons why you should watch it right now.

1. Ladies, ladies everywhere. So I heard you like casts dominated by strong women whose narratives were super complex and brilliantly acted? You’re going to love Wentworth. Wentworth is all about the ladies, and it’s putting their stories in the spotlight with diverse backgrounds and complex motives and all kinds of reasons to be hooked. Because of all the media I consume, it’s getting rarer and rarer for me to be instantly drawn into a narrative. Wentworth‘s women had me captivated from the first ten minutes.

2. I have a thing for survivor revenge narratives. It’s the reason I sobbed myself clean and dry when I watched Top of the Lake. It’s the reason why semi-cheesy pulp novels about survivors getting justice with their own hands still rank high on my list of favorite books. Wentworth is one hell of a survivor revenge narrative. Bea is a woman who has lost everything she has ever loved, and her journey to reclaiming herself and seeking vengeance is a goddamned thrill ride. You will cheer her on through every step of the ladder she climbs with bloodied hands. You will feel her highs and her lows with every aching part of you. You will get invested in this character like you’ve never been invested before.

3. Everyone, and I mean everyone, is complex and fully fleshed out and as morally grey as ever. No one’s hands are completely clean on this show. Everyone has complicated histories and even more complicated narratives. There is no sense of justice in a lot of their crimes – even the most seemingly good and sympathetic characters came to prison for reasons that will make your skin crawl. It takes some really great writing and even greater acting to pull this kind of complexity off, and Wentworth’s got it. That kind of murky morality makes for the most beautiful trainwreck you’ve ever seen; damn, is it ever bloody and terrifying, but you can’t look away for a second.

4. Did you think you knew how to cry at a television show? Newflash: You will never cry as hard at a television show as you are about to cry at Wentworth. There is one scene in particular that I will not spoil that absolutely positively ripped me to the core. I mean, I am not a cryer in general, and this dragged out big ugly nasty sobs from my shaking body. For those of you who have seen the show, you’ll understand why the line “your mum loves you to the moon and back” is capable of destroying everything that was ever happy. You will need tissues when you watch this show. You will need therapy when you watch this show. You will need someone you trust to be with you at all times immediately following this show so that you can hide in their bosom whenever you are emotionally overtaken by the memory of this show. I am so serious that it hurts. Also, this show hurts. It hurts everywhere.

5. Franky is hot. Franky is really fucking hot. Don’t write her off as Oz’s version of Shane. She’s aggressive where Shane was submissive, she’s an unpredictable shotcaller who faces off with the prison tyrant, and the way she smiles when she knows she’s got you…shit. Franky is not my type, but my girlfriend has confirmed that she is the most attractive lesbian character she’s ever seen on the small screen. You will also confirm this. 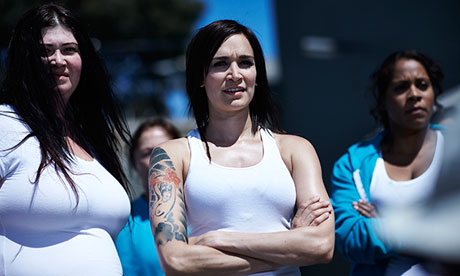 welcome to the gun show, ladies

6. The lesbian ship on this show is hot. It is really fucking hot. I don’t know what they’re calling Franky/Erica beyond Franky/Erica, but it doesn’t really matter because words do not suffice. I will stand by the fact that it is the hottest lesbian television couple on air right now. Why? Because the tension is off the charts in a way I’ve never seen it off the charts before. Because their ulterior motives and power plays make shit so much more complicated and so much more intense. Because their relationship and desires involve BDSM in a way I don’t see on mainstream television all that often, much less with a queer couple, and I’m all about that. Did I mention the tension is off the charts? Because the tension is insane. INSANE. You could power a fucking first world country with the amount of electricity their interactions produce.

7. There are a lot of people on Wentworth that other shows would write off as stereotypes, primarily if their motives are questionable. Not Wentworth. Wentworth wants to give you a true blue villain, and Wentworth gives you Jacs. Jacs has made me straight up terrified of Martha Stewart. Jacs is the hardest fucking villain I’ve seen in a long time, and Wentworth gives her free range to intimidate and dominate and still be a complicated, worthy character.

8. Did I mention the way Franky smiles, specifically at Erica?

9. How about the lesbian ship? Did I mention it was hot as fuck? Let me just reiterate for science. Watch if you dare, but there be spoilers ahead.

10. I want to be 100% clear. There are disturbing things on this show. Wentworth goes places a lot of shows wouldn’t go, and it’s with a kind of full speed ahead gung-ho intensity that’s admirable, to say the least. This is not Orange is the New Black, and it’s not trying to be. For one thing, it came out long before the other show about women’s prisons took the Internet by storm. For another thing entirely, this is not a dramedy that aims for laughs and important moral lessons. There are not many bright spots to inspire with their shine. There’s a lot of darkness, a lot of gritty and ugly shit. There is physical brutality, there is torture, there is rape and abuse and substance abuse and there were times when I had to take a lot of deep breaths to get through. This is not a show to watch when you’re looking to lift your spirits. In my experience, this is a show that makes us examine our own dark potentials, our own fears and boundaries and where those boundaries can be broken. It’s an intense experience, but I still highly recommend it.