Halloween: I actually think it might be the gayest night of the year. After all, it’s one day when we can be literally anyone and anything we want to be, without question or apology. It’s also a great opportunity to dress up our dogs. I’m not sure yet what Milo’s going to be, but when I went to the group chat looking for ideas, they delivered! Some of these costumes are official, some are from Etsy, and some are DIY; I promise, none of them are from Ethan Rayne’s costume shop (if you know, you know). If you go with one of these for your own pup, or you’ve got more ideas, let me know in the comments!

A Construct from Gideon the Ninth 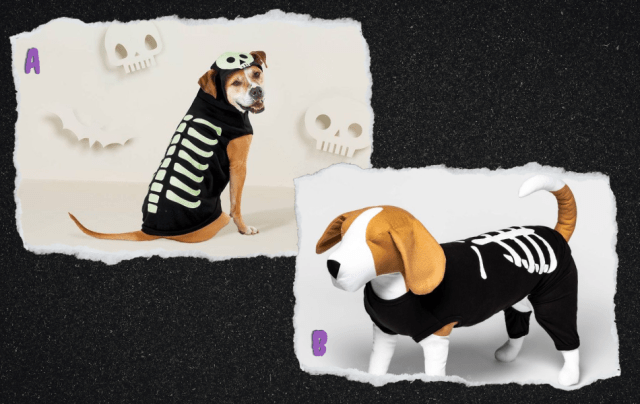 Skeletons have always been spooky (even more so if you’re Joyce Carol Oates), but ever since Tasmyn Muir came on the scene, they’re also very gay! Listen, Gideon may not be be comfortable around feelings, or common sense, but one thing she’s real comfy around? Constructs. *Cooing* Who’s a good construct? That’s right, your pup is! 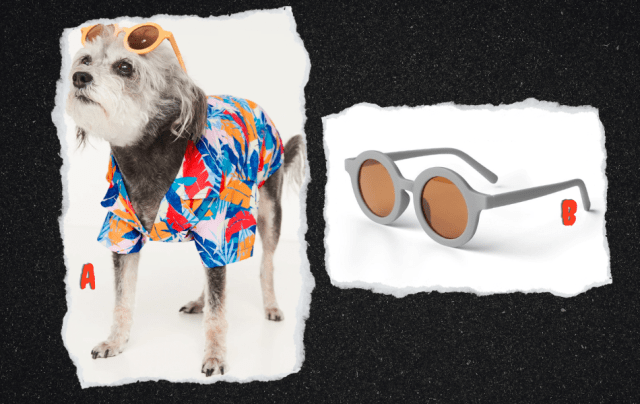 The infamous lesbian cruise! It’s been a cultural touchstone at least since a sexologist named Phoebe Sparkle seduced a cello-playing member of Betty on The L Word. I watched the lesbian cruise episode of Hacks just tonight, and I’ve gotta say, I like the update! While I couldn’t find any dog-sized Chacos, your pup will be ready to party by the pool in this tropical shirt and toddler shades.

A Member of the Coven from The Craft 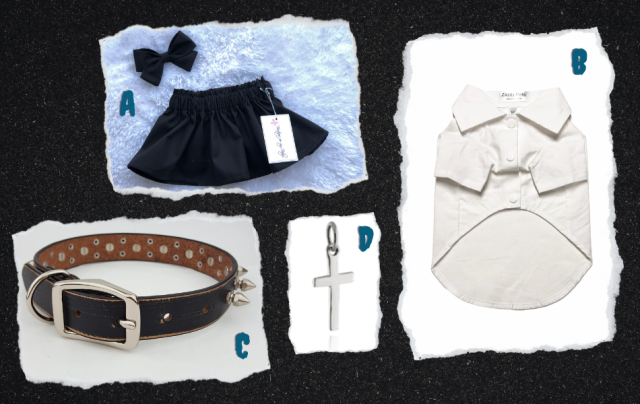 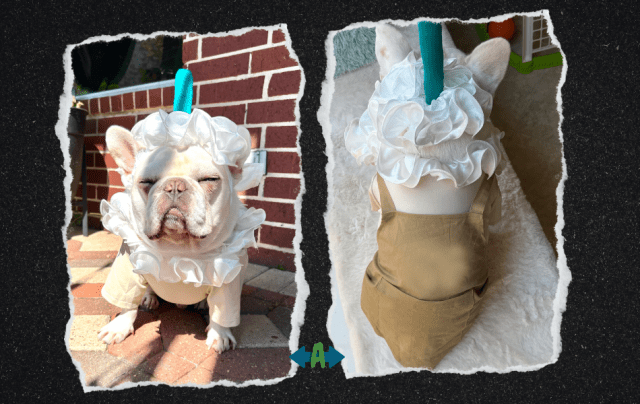 Technically, I do believe this might be a Frappuccino, but I’m going with it anyway. You could also DIY this one with a brown t-shirt and a straw hat made out of felt! I mean a straw hat, not a straw hat. You know what, never mind. We’re sucking down our coffee! We’re on to the next thing already!

An Orange from Our Flag Means Death 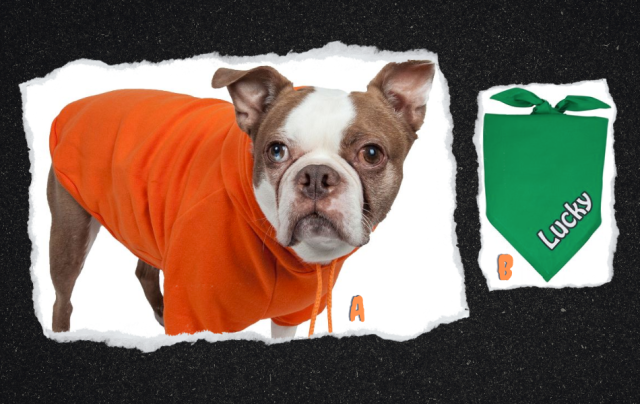 What an unexpected queer gift Our Flag Means Death was this past year. The charm! The earnestness! Vico Ortiz playing Jim! To dress your dog as an orange, I’ve put together a DIY costume in a couple of parts — an orange hoodie (stuffing optional) and a green bandana to suggest the leaf and stem. You could also try turning a pumpkin costume inside out! 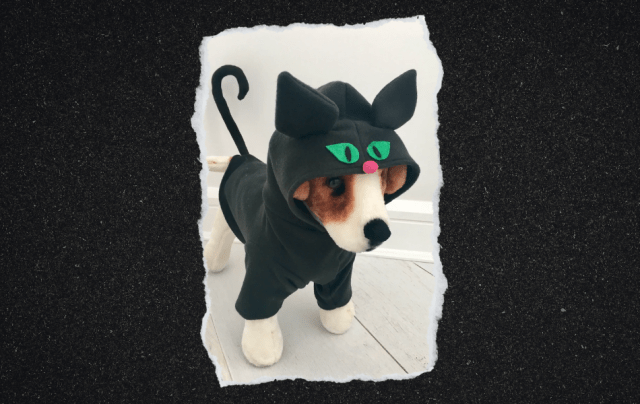 So you fell in love with a cat lesbian. Problem solved! There are no dogs here.

A Baseball from A League of Their Own 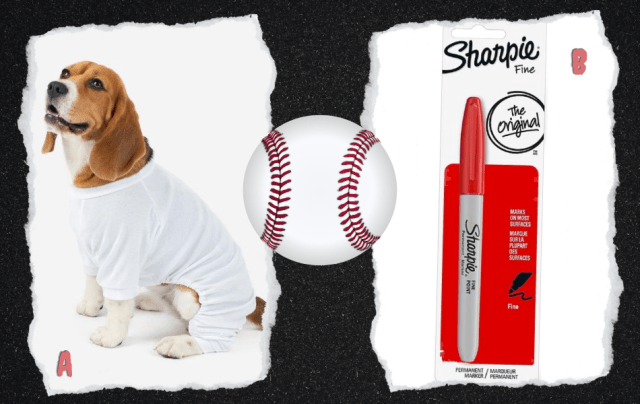 This is another DIY, this time with some white pajamas and a red Sharpie! I also helpfully included the image of a baseball, in case you didn’t know what they look like (because I sure don’t). What I do have memorized is every single heartrending moment in A League of Their Own, which I marathoned in about two and a half days this summer. 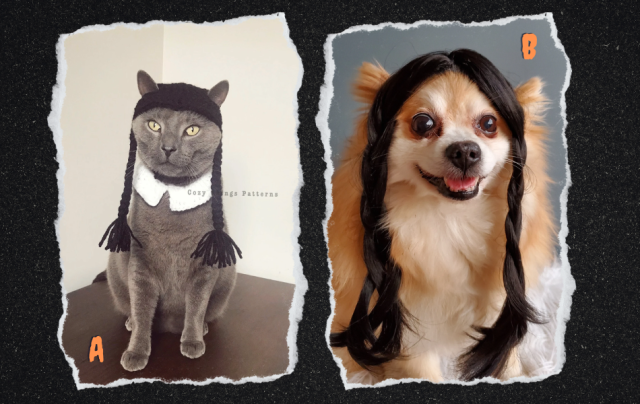 I don’t actually know whether Wednesday Addams will grow up to be gay. But she just seems queer, ya know? This first crocheted wig and collar is for a cat (which, amazing), but I do think it would fit a smaller dog! And what is an Addams if not countercultural? 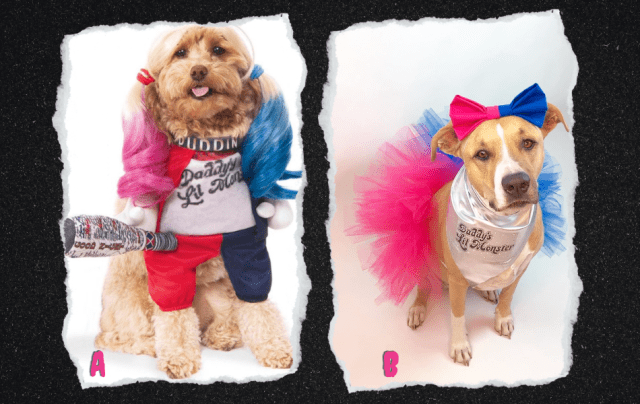 I bet both of these good dogs would really appreciate a perfect breakfast sandwich. 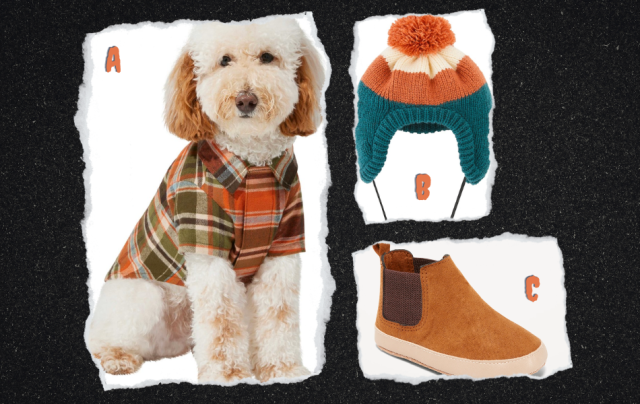 Okay so I really went back and forth here between Apple Picking Lesbian and Fall Foliage Lesbian. Whatever we call it, you absolutely know someone who owns this shirt or these boots. PLEASE NOTE that the Chelsea boots are in fact for infants and you should only keep them on your dog for the pictures! Do not make your poor dog trick-or-treat in them. For sale: baby shoes, only slightly worn.