I want to tell you about something amazing. But first, riddle me this: “What does it feel like to be young, queer and YOU?”

That question was staring at me as I checked out Testimony. I stared back at it for about twenty minutes. I need you to believe me when I say that this project may be close to figuring out the answer. 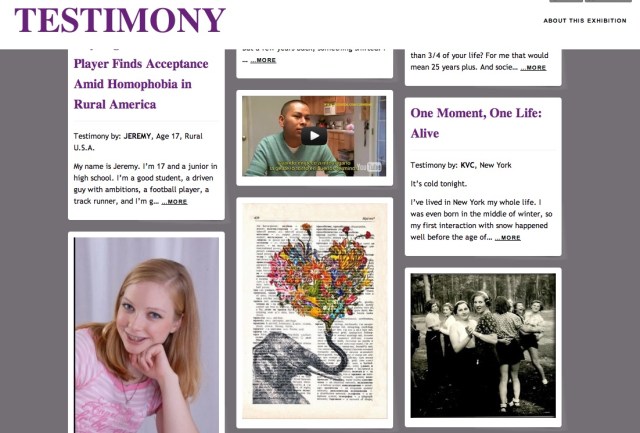 Testimony is described on Tumblr as “a creative space to tell our stories in our voices, to document history, spark dialogue, remember those we’ve lost, educate each other and others, show off our badass selves and create change.” It’s also summarized as an “open, uncensored, ongoing exhibition.” It lives online, but will become a part of the real world in July when it is featured at the Fresh Fruit Festival. And it’s amazing.

The space, which exists as a submission-based blog to exhibit any kind of creative work, is filled with stories. Coming out stories, falling in love stories, motherhood stories, being abandoned stories, surviving anyway stories, transition stories, I love my life now stories, this is really hard stories. It isn’t that any of the pictures, short stories, essays, links, resources, or poems talk about anything in particular that exemplifies being queer. It’s that together they define it. It isn’t about coming out, or falling in love, or any of the everyday things. It’s about the experience:

When I first realized I was gay, I would shack up in my friend Danny’s apartment and talk to him about it. He was one of the people who really liked that, the person who was willing to nod along when I spoke so that I didn’t feel so confused about myself, so that I could say it out loud and make it real. It wasn’t like anything in particular that we talked about — sex, relationships, identity, labels and Eileen Myles — was the focal point of my experience at that moment. It was just the idea that I could figure out who I was if I kept talking about how my day went, or how I was feeling that day about who I was, or when I would tell my mom that I’d figured it out. It was the sum total of twenty years not understanding that turned into minutes, days, and months of comprehending the entire world. It was just the experience. I realized I was gay and it was like suddenly I got that grass was green, that the sky was blue, that Earth was spinning, that love was real, that flowers were everywhere, that the sun was constantly rising and setting. I realized I was gay and suddenly, I existed.

I whisper my new name aloud, tentatively, and my breath comes out a cloud of white.

It’s the most real I’ve ever felt.

I never know exactly how to summarize what it means to be gay because to be honest, it kind of exasperates me. How can anyone talk about being queer in any simple way?  “Testimony” is right because to be honest, if I’d never gone through it I don’t know if I’d believe anyone else when they talked about how it felt to come out or love a woman or buy leather boots. “Testimony” is right because being queer is this sort of surrealist art project happening in real life. Things are unfolding and things are really terrifying and brilliant and wonderful like colors swirling in a painting. Your past and your present constantly meeting on a canvas, and eventually you find yourself there.

And to insinuate that every queer person has “a story” is ridiculous. Being queer is not a one-act play.

Thus, there is Testimony: a large sum of great parts. An epic in a series of vignettes. Quick snapshots of what it means to be queer in one instant, not one life. Because the only way to tell my story is to give you small pieces until you have enough to understand. Because none of us have enough time to put it all down but together we can supplement one another until it seems more like something that actually happened.

My promise to myself this week is that I am going to testify.