It’s Saturday and I’m kicking pebbles on an uneven dusty trail. I touch the gray rock to my left, and peer off the trail down to the right. Browned shrubs and scraggly vines work their way out of the dirt and rock. Southern California is parched; the stream that once carved this path is dry. I’m walking single file with fifty Unlikely Hikers towards the waterfall at the end of the trail. 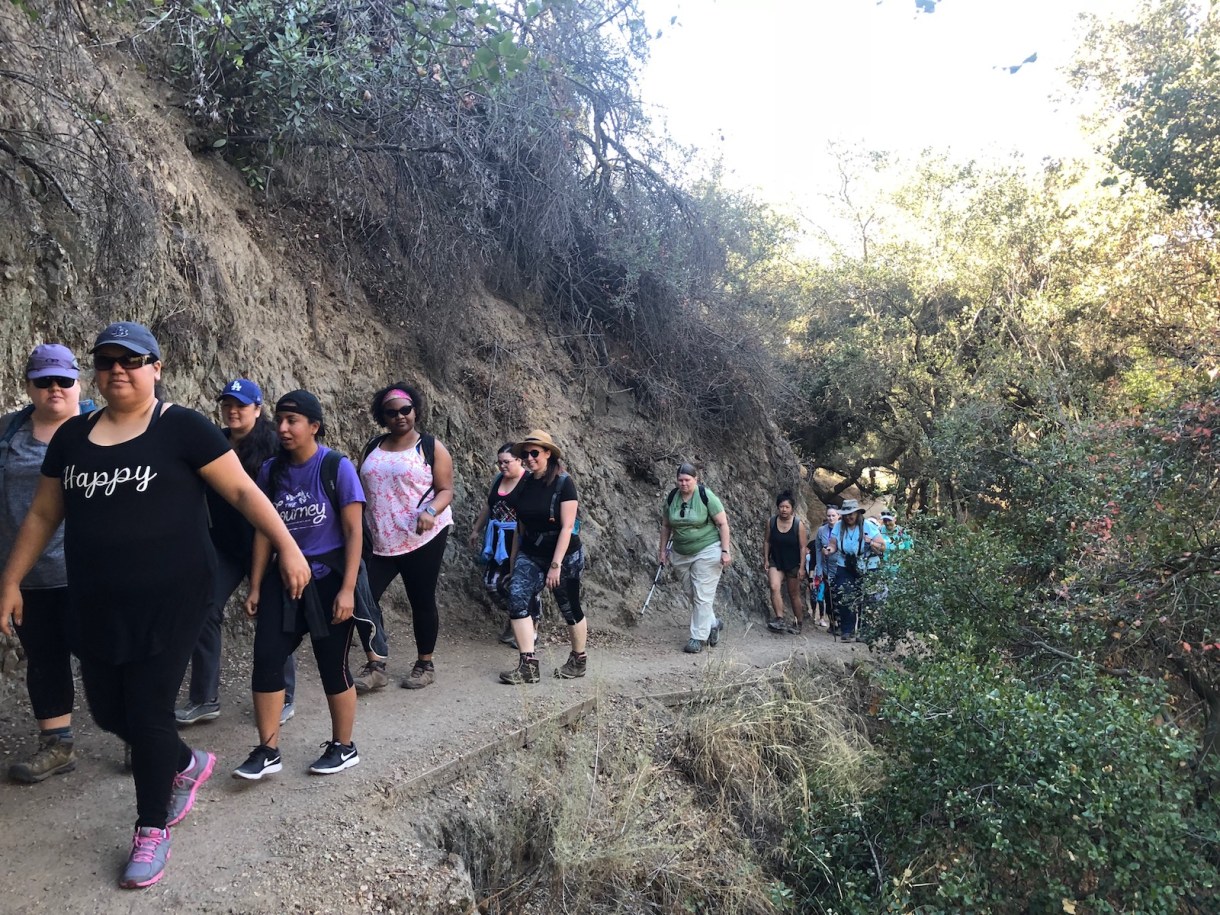 This morning, I followed a GPS point off the Unlikely Hikers website. There was no RSVP required, I just had to show up. The hike would be a mile and a half round-trip and involve free snacks. Two queer friends of color came with me; none of us had ever been on a group hike before. Even though I’ve backpacked, hiked, and biked for years, my interactions with people along the way have taught me to dodge outdoors culture.’

When I bicycled across the US and Canada in 2014, I spent a few days, here and there, riding with bicyclists who I met along the way. I’d often meet them at campgrounds on Adventure Cycling Association routes and we’d follow the same path up and down mountain passes, day after day. It only took riding with a few straight men to realize that I, a queer brown woman, couldn’t really feel like myself while with them. Most of them asked me whether my boyfriend had “allowed” me to go on this bike ride, even before asking whether I had a boyfriend. One, a fifty-something-year-old guy, took his tools to my bike every night, assuming I couldn’t fix it myself, even when he couldn’t either. Another went on a racist rant about indigenous people when we rode across reservation land. Some of these actions were tiny, momentary, while others felt more disturbing. After riding with these guys, I avoided ACA routes. I didn’t want to be on a bike highway with people who would not see me as a human independent of a boyfriend, assume that I was ignorant about bikes, or subject me to their racism. I avoided anything to do with bike culture, or outdoors culture.

This past October, I saw that Jenny Bruso, the founder of Unlikely Hikers, was hosting a group hike outside of LA. Jenny is a fat queer hiker and writer who originally created Unlikely Hikers with the goal of changing her Instagram feed. Representation of outdoor culture has long mirrored the exclusionary attitude of many who play outside, and Jenny’s purpose in creating Unlikely Hikers was to reclaim the term and create a community centered on diversity, inclusion, representation, and body liberation in the outdoors. The mission of the group resonated deeply and Unlikely Hikers grew quickly. The community now has more than 58k followers on Instagram, and Jenny leads group hikes all over the country.

When I looked at the Unlikely Hikers website to learn more details about the group hike, I saw that Jenny set up intentions clearly by writing: “Absolutely no diet or weight loss talk. Be mindful of gender pronouns, group dynamics, microaggressions, cultural appropriation and different physical ability levels.” With this laid out for me, I decided to go on my first group hike ever. 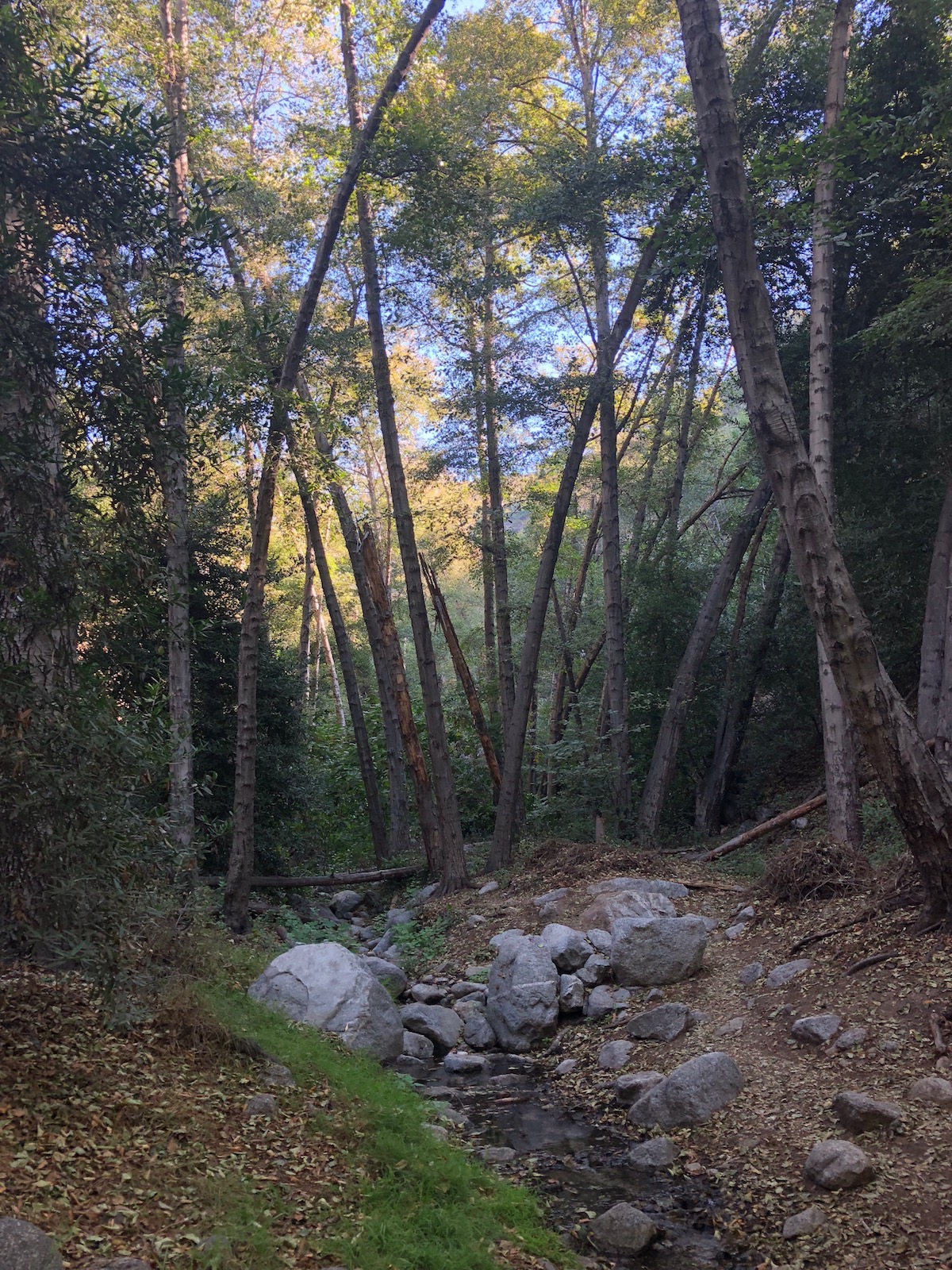 When we arrived, we found a dozen grinning people of various genders, ages, races, and body types. Some people had hiking poles and backpacks, others carried just a water bottle. Jenny, in her neon Unlikely Hikers shirt, welcomed each person with a smile, a handshake, a hug. She encouraged us to introduce ourselves casually while people filtered in.

Within a few minutes, there were over fifty hikers present. Jenny asked us all to sign a waiver and then had us stand in a circle. Shoulder-to-shoulder, we looked at the faces of those who would be our team on this hike. Jenny introduced herself, gave a brief description of Unlikely Hikers and the work she does, and presented the temporary world we would be a part of. “Maybe you’ve never heard this language on a group hike,” she said, “but this isn’t just a regular group hike.”

Here, Jenny invited us to behave differently than we would in the world outside of this. She acknowledged that women, femmes, and people assigned female at birth are often conditioned to relate to each other by saying disparaging things about our bodies. So, instead of doing that, she asked us to “refrain from diet and weight loss talk, notions of good and bad bodies, good and bad foods, or being in shape and out of shape.” When I asked her about this intro, she said, “My intention isn’t to silence or censor anyone because they can do this, literally, any time in their lives. But for this window of time we’re spending together, we’re going to revere what our bodies do for us. I invite everyone to try to be in their bodies as we hike.” 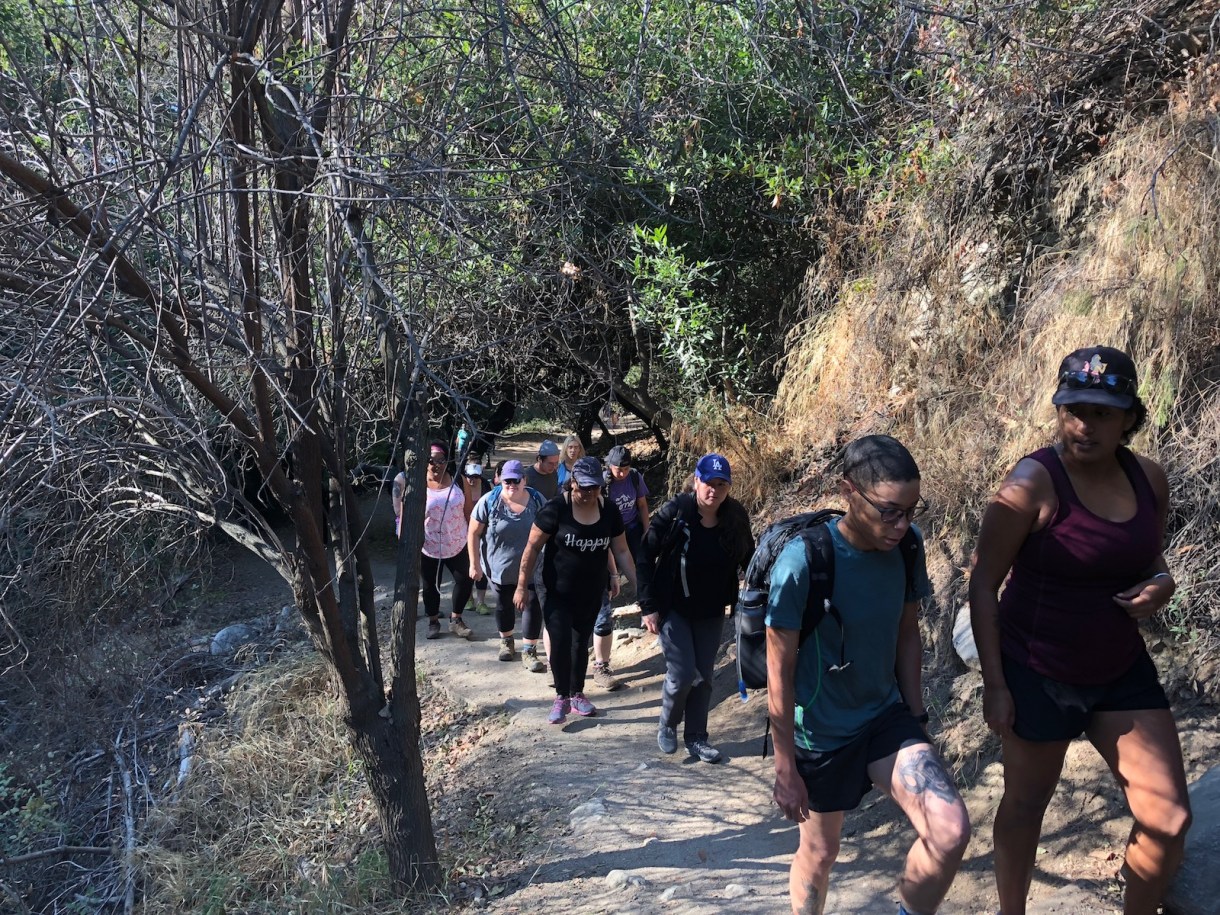 Jenny guided us through introducing ourselves. She acknowledged how courageous it is to show up to exercise with a group of strangers. She reminded us that we don’t know someone’s story just by looking at them and explained why asking pronouns matters. For folks who have never asked before, she acknowledged that it might be initially uncomfortable, but said: “Our individual discomfort doesn’t trump another person’s lived experience.” As we shared names and pronouns, I witnessed each smiling face beam. It seemed like so many of us were amazed to be on a different kind of hike.

Jenny acknowledged that we were on Ancestral land of the Tongva and that in North America, we are always on stolen land. She reminded us not to refer to indigenous ownership of this land in the past tense. “Colonization and displacement of Native peoples isn’t a thing of the past as many of us are taught in school, but something still occurring to this day,” she said. She then asked us all to behave as guests on the land and to acknowledge the privilege of being in these beautiful places: “It isn’t something we’re owed, despite all we hear about ‘public lands.” As people who adventure in the outdoors, we need to actively work against narratives that erase indigenous people’s claim to the land.

These things — setting guidelines for the kinds of conversations we’d be having, acknowledging gender diversity within the group, and honoring the indigenous people on whose land we walked — helped address so many of the concerns that I, as a queer brown femme, have about engaging with outdoors culture. I can’t explain how unreal it felt to be able to let my guard down with a big group of strangers on a hike. By raising these things upfront, Jenny allowed me to be fully present, to relax a little, and to have joyful conversations with new friends.

The hike itself, then, was encouraging and fun. Jenny partnered with a local group, Black Girls Trekkin’. For black women who were local to the area, this became an opportunity to learn about and become involved with Black Girls Trekkin’, whose goal is to “build a community that will show the world that women of color are a strong and present force in the outdoors.” The founders of that group, Tiffany Tharpe and Michelle Race, led the hike with Jenny; they kept track of the pace and called for breaks when the group was drifting apart while Jenny stayed in the back of the group and ensured that everyone was drinking water, eating snacks, and going at a pace that felt good for their bodies. Jenny said that when starting these group hikes, she realized it was vital that no one get left behind. “The fear of being the slowest gives most people anxiety,” she said, “regardless of body type or ability.” 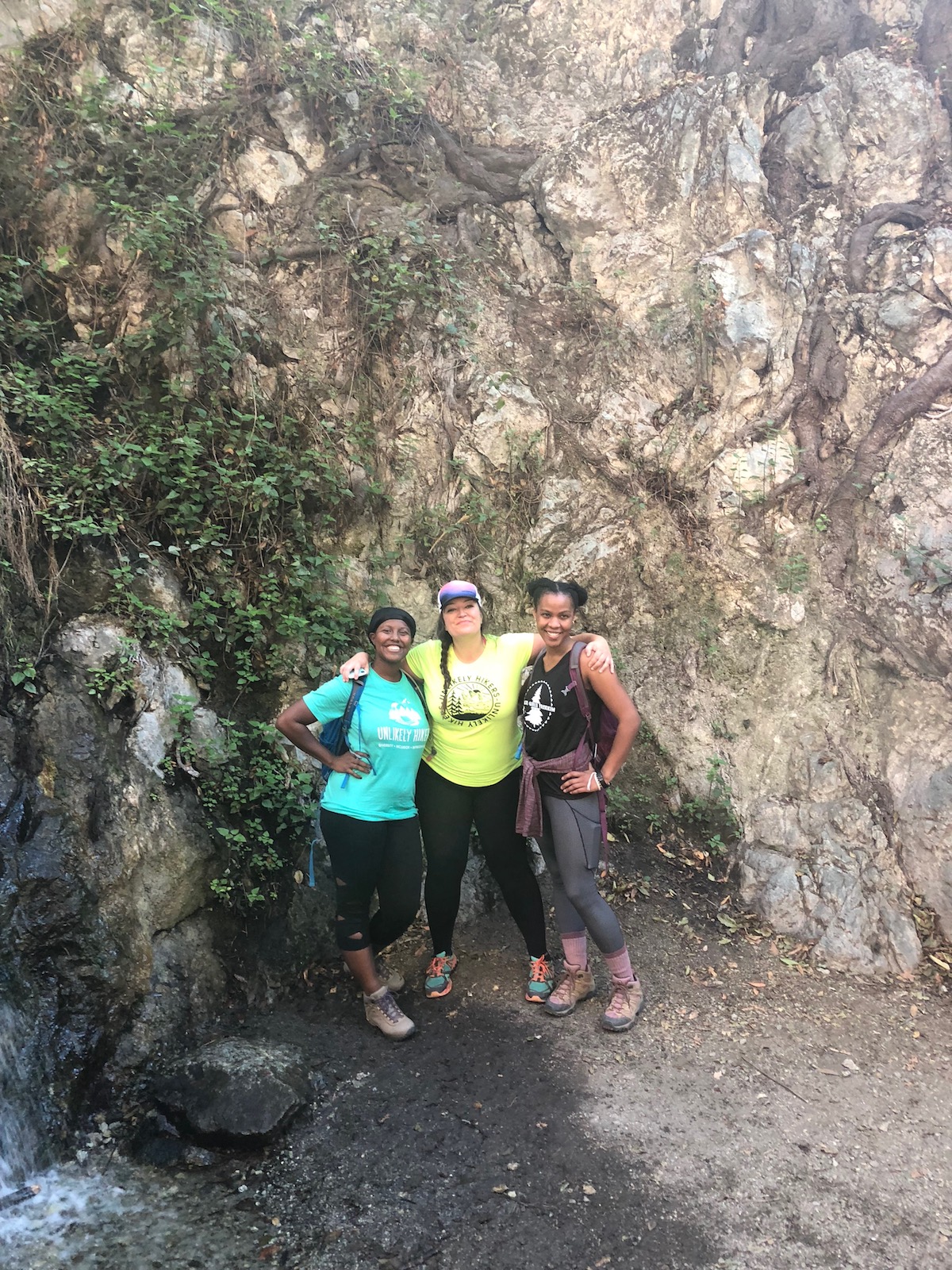 Because my experiences with outdoor culture have been laced with misogyny and racism, it has been rare for me to find outdoors community in which I don’t have to minimize myself. When I asked Jenny about how she learned to create this intentional space within a hike, she told me that at first, she had few examples to go on. “I’d only been on maybe two group hikes ever, with other groups, and didn’t have great experiences,” she said. “My hike pre-talk has evolved a lot from the beginning, mostly out of trial and error.”

Her willingness to try has made all the difference. I couldn’t wipe the smile off my face while getting to know other queer folks of color who backpack and hike. Here, with Unlikely Hikers, I could show up as myself.

While it wasn’t explicitly a queer hike, the principles of what we were there to do — love our bodies and each other, slow down so we can intentionally choose to stay together, encourage each other to voice our own needs and stay positive about whatever our bodies are experiencing, and never see each other as a burden — that’s queer as fuck! It was the first group hike I’d ever been on and, knowing that outdoors culture places blame on women for not being good enough, strong enough, anything enough, it was a revelation. Hiking with Jenny Bruso and Unlikely Hikers helped me see tangible ways in which we can create space for each other, even in the woods. 🌲 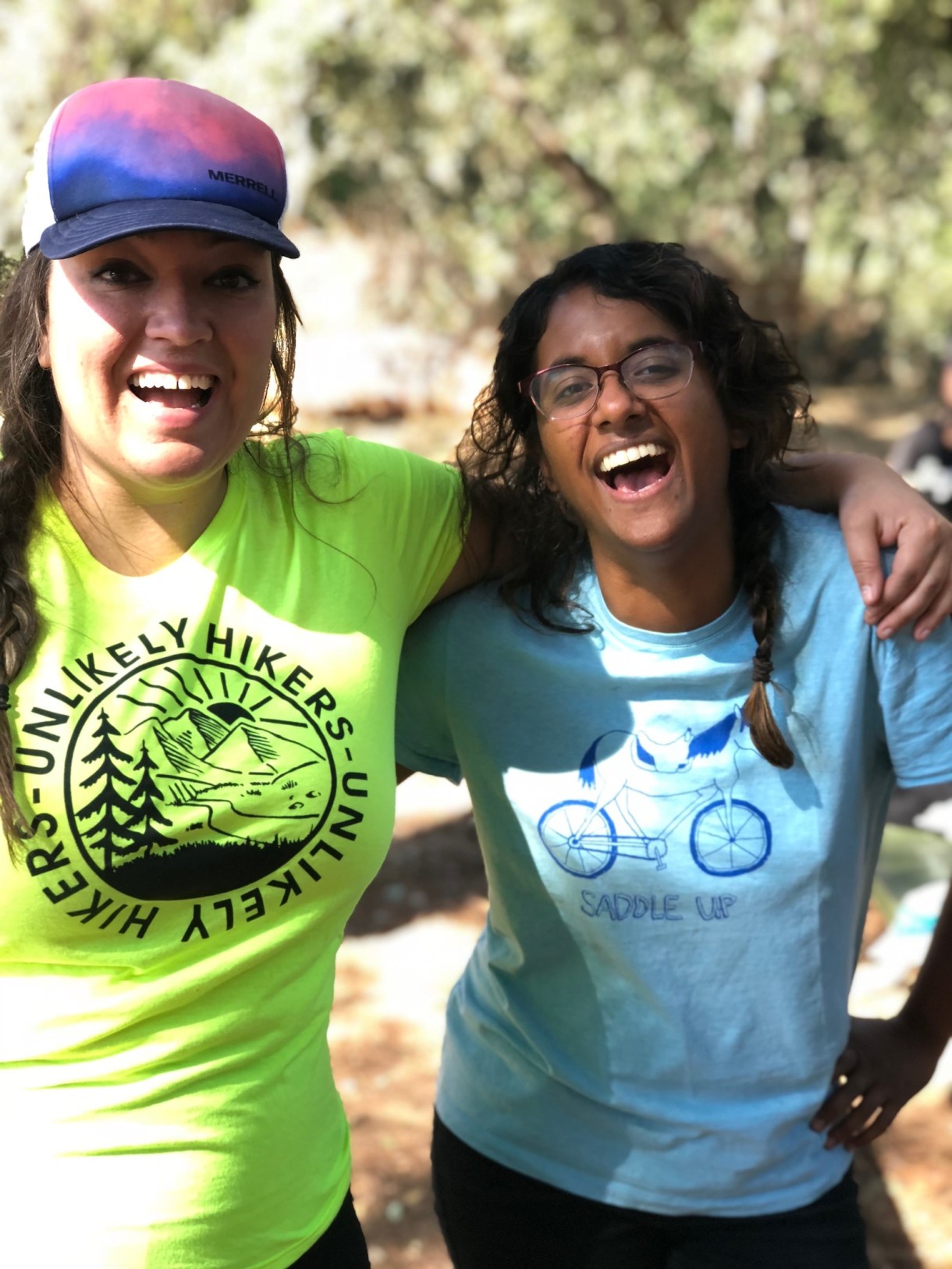