I grew up during the 1990s and early 2000s in the western German countryside, where “gay” was a slur and your classmates better not suspect you to be a lesbian, and the best representation we had was t.A.T.u. singing “All The Things She Said” on MTV. After studying in central Germany and the UK, I moved to Berlin four years ago, where I got immersed in some local queer scenes and also picked up a bit of queer history along the way.

Mostly U.S. history, that is. A lot of the LGBTQ content I consume is from the United States — from watching The L Word and listening to the Dear Prudence podcast to reading Autostraddle. Our annual pride day is even named Christopher Street Day (CSD), after the riots at New York’s Stonewall Inn.

I sometimes wondered about the fact that we collectively refer so much to U.S. history and English language terms like “gender” when talking about queer culture. But I didn’t think about it too much. After all, a lot of pop culture consumed in Germany is an import, be it TV series or music artists. Maybe there simply hadn’t been that many noteworthy cultural contributions by German queers in the past. Some politicians here even like to claim that LGBTQ people are an odd, neglectable minority. Then I came across this tweet with a picture of the Nazis’ book burning in Berlin in 1933, saying: “Periodic reminder that this famous nazi book burning photograph was them burning the Magnus Hirschfeld library, which specialized in transgender research”.

I had no idea. What else had I missed about the queer past of my city?

The Institute for Sexual Science was founded in 1919 by Jewish doctor Magnus Hirschfeld. The Institute offered sex education and counselling, lobbied to legalize consensual sex between men, issued documents for trans people and cross-dressers as protection from the police, and performed gender-confirming surgery. In the 19th century, Hirschfeld had formed the first ever homosexual organization, the Scientific Humanitarian Committee, which was also led by lesbian feminist writer Johanna Elberskirchen.

In 1933, while Hirschfeld was abroad on a speaking tour, the Institute was raided, destroyed and closed by the Nazis. Hirschfeld died in France two years later. The Institute was never rebuilt. Most of its research, archives and library were forever gone. Along with queer lives, the memory of the vibrant queer culture of the Weimar Republic was destroyed. LGBTQ research and activism in Germany was set back at least 50 years. 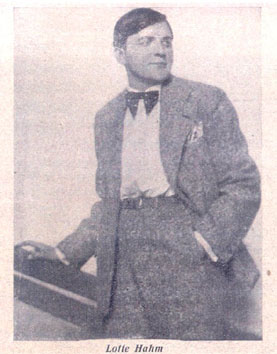 Image of Lotte Hahm, courtesy of A Gender Variance Who’s Who

I have to admit, I moved to Berlin in part because of the city’s abundance of queer and feminist community.

No matter what aspect of LGBTQ activism and culture you are looking for, you you’ll probably find it here. I get to sing in a queer choir and visit regular zine fests and bar nights. But when I started digging, I learned that during the 1920s, there were at least 30 lesbian societies in Berlin alone, with many more in other cities and probably countless of which we have no trace left. Just as an example, the Berlin based lesbian society Violetta founded by feminist activist Lotte Hahm had more than 400 members. There were more bars for lesbian, gay, trans and bi people during the 1920s than there are today. All of that culture was destroyed during World War II, and it didn’t get a chance to recover for decades after the end of the war.

I visited the cramped office and archive of the Magnus-Hirschfeld-Society in central Berlin. Archive co-founder Ralf Dose explained to me that it wasn’t until the seventies and eighties that activists were able to regroup and discover that they were not the first lesbian, gay, trans and queer generation to build a cultural life for themselves in Berlin. They founded organizations such as research centers for sexuality and lesbian archives in order to re-collect and preserve queer knowledge and history. Many times, this happened without any support from the postwar West German government, who instead of rehabilitating and apologizing to them, had continued to persecute gay men after the end of World War II and until 1969. 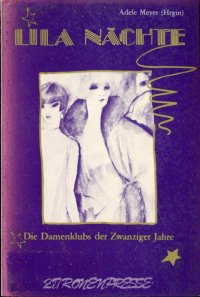 “My dream always starts with: What if… we for example could watch the movies made by the Violetta-ladies today, or what if we owned the private archives of Lotte Hahm?”

Gudrun Schwarz wrote this in 1981 in her introduction to a reprinted edition of Lila Nächte, or Purple Nights. The original copy was a Weimar republic queer ladies’ city guide. The following year, she opened the Lesbian Archive in Berlin with materials that had been collected by activist groups since the early seventies.

I found this book in that very same archive, which today exists in a loft in central Berlin, as a recommendation by historian Katja Koblitz, who works at the archive and library today. Its name has been changed to Spinnboden, referring to the lofts where women historically used to meet on dark winter nights to spin and knit together. Boxes and folders are stacked to the ceiling. The space is vast; still the atmosphere is friendly and cozy.

Koblitz tells me that if she’s asked about a particular lesbian activist during World War II, many times she cannot give an answer. There are no traces left. Nevertheless, the Spinnboden collects all the material they can find on the topic, because this knowledge is fragile and, as history shows, so easily gets lost or purposefully destroyed. I spend the whole day there, reading up on lesbians of the 1920s and 30s, the Violetta Klub and its founder Lotte Hahm, who also co-founded the trans and/or cross-dressing society D’Eon.

“If we want a space that is accessible to all and with information from everyone, we ALL have to start PRESERVING OUR HISTORY”, wrote Schwarz, the original founder of Spinnboden, in her introduction to Purple Nights. There she also stresses: “lesbian history doesn’t just concern the 1920s (and earlier) lesbian history is also our everyday life — or that of ten years ago.” Lesbian, bi and trans history happens all the time.

I think about Gudrun Schwarz’s words and wonder: What if? What if I had known about Hahm and Elberskirchen when I grew up? What if gay lives and cultures hadn’t been destroyed and forced underground for so many decades? Where would we be now? It’s impossible to tell. However, talking to people like Koblitz and Dose, who work hard to rediscover and preserve our knowledge about the queer past, gave me a lot of hope about our communities.🔮
​
Edited by Carmen
​

Join A+
Related:In Another World

Sanna SAM Mustelin is a writer from Germany. They hold an MA in Media and Cultural Studies and live and work in Berlin.

SAM has written 1 article for us.