So, race was a topic this year. I don’t know if you caught that. Much of the conversation drove me crazy, which is to say, I appreciated MTV’s whitesplaining whitesplaining video. But there were some moments of anti-racist creativity that were so sublime, I’d like to take a moment to honor them. These are the top ten moments of radical art or artful activism that I encountered in my own little world this year.

If you can get through this song without breaking down I wish you the very best of luck vis-à-vis the whole humanity thing.

During a temporary teaching gig in Minnesota, I took my literature students on a field trip to see the Walker Art Center exhibition “Radical Presence: Black Performance in Contemporary Art” in Minneapolis. After reading Zadie Smith’s NW, Kiese Laymon’s How to Slowly Kill Yourself and Others in America, Claudia Rankine’s Don’t Let Me Be Lonely, Sapphire’s Precious, and watching Fruitvale Station, we were so exhausted by grief, class began to feel like group therapy. One of the first art pieces that we encountered upon entering the exhibit was the aftermath of a performance in which Pope.L chewed small pieces of the Wall Street Journal (along with ketchup and milk) and then spit them out while seated on an elevated toilet. As if to say: if you can’t beat ‘em, vomit ‘em. 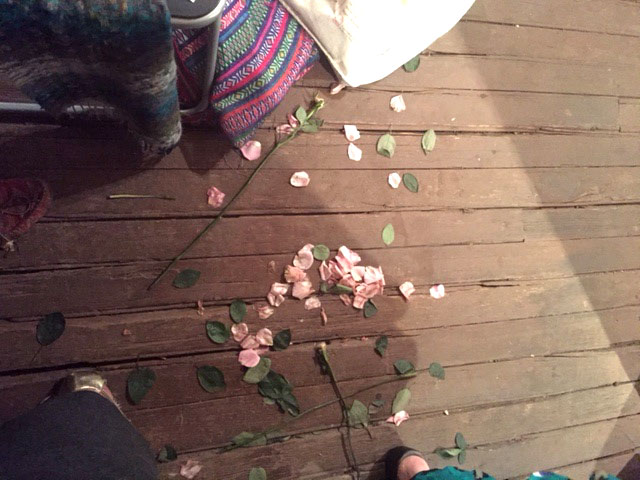 Since we’re on the topic of regurgitation: Recently, I went to a reading by the British-Indian poet Bhanu Kapil. She prepared to speak by physically rejecting colonialism. She chewed (delicately) and then vomited forth an English rose. Earlier this year, I saw her conduct two sessions: “Orality and the Mongrel Cry” and “White Privilege Exorcism.” In the first, she asked for a person of color in the audience to volunteer to receive a treatment that might relax his masseter muscle and help him better release his mongrel cry. For the second, Kapil coached a white female volunteer to loosen the muscles in her face “engaged in instances of disgust” so that she might be less likely to inadvertently sneer upon encountering a person of color. It was like going to a comedy club, except instead of being told by the comedian that you must be a black bastard because you have a white mom (which is what happened the one time I went to The Comedy Store) you are affirmed and encouraged.

While meeting Patrisse Cullors caused me to experience a brief neurological solar eclipse, and listening to Darnell Moore talk about the significance of queer inclusion in this new civil rights movement gave me the chills, and I was prouder than a peach about my friend Matice M. Moore’s kick ass t-shirt design, the presentation that turned me into a weeping mess at this year’s BLM conference in Tucson was by the queer grassroots organizer Raul Alcaraz Ochoa. He’s the kind of activist who crawls under border patrol vehicles to protest the deportation of somebody’s father. When he spoke, he was on his way to and from a political action, so he had to be brief. But in that amount of time, he spoke glowingly about the African American civil rights struggle, and talked about the importance of intersectional activism. How minorities in this country need to keep an eye out for each other, because we’re all up against the same machine.

When you are in an MFA workshop and somebody says something racially screwy, it can take a second to truly wrap your mind around what’s happened. And besides, you’re busy talking about literature — who has time to stop the conversation, pull out the Peggy McIntosh and dismantle white supremacy there and then? So when I first encountered the Mongrel Coalition Against Gringpo, I felt like the blind man in Amelie at that moment when she takes him by the arm and describes what’s happening in the world around him and the sky opens up and he momentarily transcends his physical form (nevermind, for a moment, the savior complex at play, nevermind the fact that Paris was mysteriously devoid of black and brown bodies for the duration of this film). Mongrel Coalition Against Gringpo says all the things that anyone who has ever been an MFA candidate of color could ever want to hear about racism in the literary world but with panache, with hilarity, AND IN ALL CAPS. 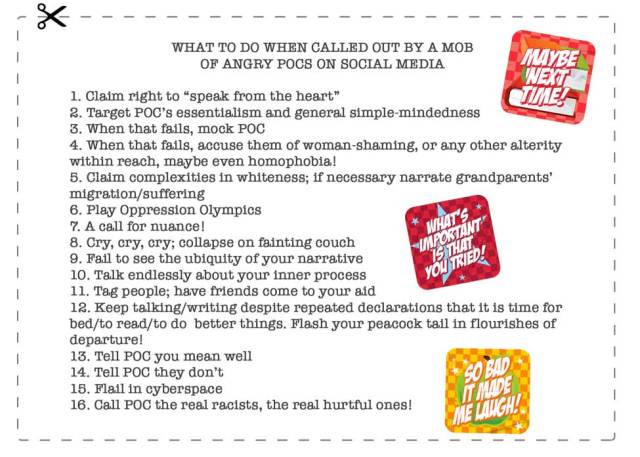 from Mongrel Coalition Against Gringpo

A recent blog entry includes a list of hypothetical book titles you wish filled your library, including:

WHY IS THIS WHITE WOMAN CRYING?: WHITE FEMINISM FRAGILITY AND THE MACHINATIONS OF PRIVILEGE

DON’T SHIT ON MY HEAD & TELL ME IT’S A HAT: THE CHAMBER PISS POT ANTHOLOGY OF TRADITIONAL AMERICAN POETRY

CHE GUEVARA HATES YOU: THE MAN BEHIND YOUR STUPID T-SHIRT

SURVIVING YOUR MFA/PhD: A YOUNG POC’S TALE OF… OH, FUCK IT, JUST QUIT

VOULEZ-VOUS COUCHEZ AVEC YOURSELF: NEOCOLONIAL FRANCOPHILIA DOES NOT MEAN HAITI IS YOUR BLACK BUCK.

I really just said Basquiat’s name to get your attention. If you, like me, were obsessed with the film Basquiat when you were a teenager, you probably have memorized every single scene in which Jeffrey Wright canoodles with, pisses off or otherwise engages Claire Forlani. In reality, Forlani is a composite character, referencing, among others, Basquiat’s on-again-off-again girlfriend, Suzanne Mallouk. At one point, in real life, Mallouk was involved with a young black man named Michael Stewart, who was killed by police officers after he was caught tagging in the New York City subway. Mallouk raised money to help Stewart’s family bring his case to court. She also photographed every wound on Michael Stewart’s dead body for evidence. Basquiat made a painting. Before cell phone videos, there were people in a room with a body taking risks. Read more in Jennifer Clement’s autobiographical novel about Mallouk, Widow Basquiat.

I first saw images of this project when a friend told me about a recent trip home to New Orleans. Lisa Sigal’s project — part-theater, part architectural intervention — imagines a couple conversing about their complex response to the idea of a blighted house burning down. Quotes by playwright Suzan Lori-Parks are written on the walls. Long after the performance, the words of Lori-Parks still mark the homes with evocative language. My very favorite is the one house that boasts this little snippet of dialogue:

White: You thinking of me?
Other: No.
White: How bout now?

When I read the New Yorker profile “Unfollow” about former Westboro Baptist Church devotee, Megan Phelps-Roper, I was undone by David Abitbol’s decision to play nice, which was a major factor in Phelps-Roper’s choice to leave the church. “You know, for an evil something something, you sure do crack me up,” is how their friendship began. My social media fights never end that well.

I first encountered the work of Jen Hofer when she read from a piece that she translated, I think it by Cristina Rivera Garza. Because Hofer is especially unwilling to make the politics of translation invisible, she includes commentary (more than usual) in her work so that no reader comes away from the text assuming that Spanish and English roll neatly from one into the other without explicit choices being made in that sometimes turbulent, sometimes untranslatable between space. She explains, “translation is the echo or annotation of a text whose body or being we cannot perceive in its entirety.” For awhile now, she has been collaborating with John Pluecker. These queer poets, artists and activist interpreters have created a project called Antena, a “language justice and language experimentation collaborative.” The project is a mobile translation operation. They sell and make books, participate in political protests, and create multilingual spaces– acting as interpreters for community events. Hofer explains of the collision of aesthetic practice and social justice work: “Our work as interpreters is also our poetry.”

I love Claudia Rankine for a number of reasons, the least of which being that when me and my girlfriend asked her to sign The Racial Imaginary after a reading, she told us, “You guys are cute.” YEAR MADE. So to see her book held high behind Donald Trump’s face at a rally where anti-racist protesters were being bullied? It was a moment of the most delicious magic. Also, Johari Osayi Idusuyi has been a delight to watch in interviews. 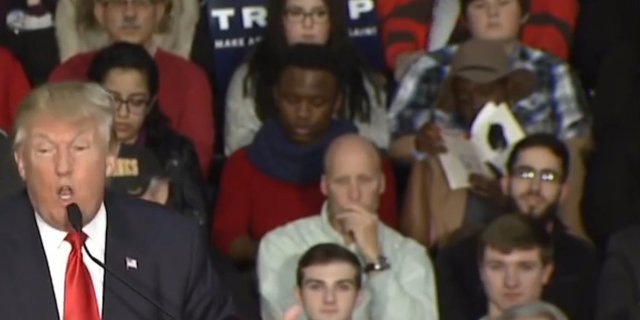