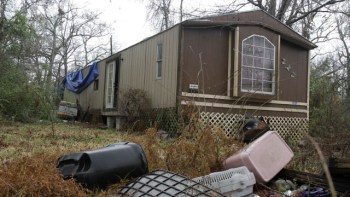 Just one day after we asked where the hell was that Times’ gang-rape follow-up, the paper finally released the “whole new story” executive editor Bill Keller suggested would make up for the notorious victim-blaming piece the paper ran earlier this month. It seems it took the Times nearly three weeks to post a follow up story because its reporters were looking for new information in a story that has been extensively (and less offensively) covered by other news outlets, most notably The Houston Chronicle.

The lengthier article “3-Month Nightmare Emerges In Rape Inquiry” includes several new and somewhat superfluous facts, including a history of the house where the November 28 rape took place, more information on how police learned about the crime, and a description of the girl’s former home.

But the biggest “get” is the first interview with the 11-year-old victim’s father. Reporters Erica Goode and James C. McKinley (who wrote the original story) explain what they’ve been up to:

Court documents and dozens of interviews over several weeks with the girl’s family, her friends and neighbors, as well as those who know the defendants, provide a more complete picture of what occurred as well as a deeper portrait of the victim. What begins to emerge is the nightmarish ordeal of a young girl over two and a half months involving an eclectic group of young men, some with criminal records, who shared a powerful neighborhood bond.

The victim is described as “an outgoing honor roll student, brimming with enthusiasm” who became withdrawn in October. While reports have focused on the November 28 incident, police say she was raped by various men and boys at least six times between September and December.

The girl’s father, who is identified as “Juan,” says he and her mother found out about the assaults in November when she came home early in the morning after sneaking out of the house. They also found several explicit photos on Juan’s cell phone, which the girl had been using.

The Times still suggests that the girl looked older than 11, but the message isn’t as glaring; this time around and it’s not about her clothes or behavior. To refresh your memory, the paper’s March 8 article said:

They said she dressed older than her age, wearing makeup and fashions more appropriate to a woman in her 20s. She would hang out with teenage boys at a playground, some said.

In the new piece, the information on her clothing choices is removed, and the note that she’s “tall for her age” is followed quickly by her father explaining that the 11-year-old is indeed still a child:

As she reached puberty, he said, she had grown tall for her age and had begun to talk about wanting to be a fashion model. Yet she was still a child; her bed was piled high with stuffed animals. “Her mind is a child’s mind,” he said. “That’s what makes me so angry.”

Similarly the description of the community’s reaction has been worded more carefully. The most controversial line of the March 8 article read:

The case has rocked this East Texas community to its core and left many residents in the working-class neighborhood where the attack took place with unanswered questions. Among them is, if the allegations are proved, how could their young men have been drawn into such an act?

The new version is:

The arrests have raised fundamental questions about how a girl might have been repeatedly abused by many men and boys in a tightly knit community without any adult intervening, or even seeming to register that something was amiss, until sexually explicit videos of the victim began circulating in local schools.

The article continues that the town is “torn between condemning the crime and defending the young men,” and explains that some residents don’t think the all of the defendants are guilty. There’s no mention of Cleveland, Texas residents blaming the girl and her mother for the rapes, which sadly does seem to be a recurring theme in the commentary from locals. The original problem wasn’t that the Times chose to report this fact, but that it failed to balance the story with appropriate concern for the girl and make it clear that the reporter understood the girl wasn’t at fault.

The Times did manage to gather an impressive amount of new information about the case, considering that the judge has issued a gag order banning investigators, witnesses, and attorneys from speaking to the media. The reporters don’t explain how they were able to talk to Juan, defendant Xavier King, and several other residents despite the order. In general, the new article is a much more thorough portrait of the impact the disturbing crimes had on the victim and her family. It’s just unfortunate that it took the paper of record two tries to adequately report the story.

This article originally appeared on Jezebel. Republished with permission.