This will be a quick recap; not too much to report. I think probably after the CW DC crossover we’ll just keep Sara updates in the Boobs (On Your) Tube, unless something hella queer happens. That way I can focus all the energy I’m not using to fight racism/the patriarchy/Death Eathers in this post-election world to write my Supergirl recaps.

This episode mostly revolves around Wally starting to remember having speed in Flashpoint, and Alchemy tempting him into getting them again. While everyone is focused on that, Caitlin stresses about what actually having powers means, and while she figures it out, she swipes some power-quelling cuffs. Eventually she’s busted wearing them and confesses about her ice powers to Cisco. 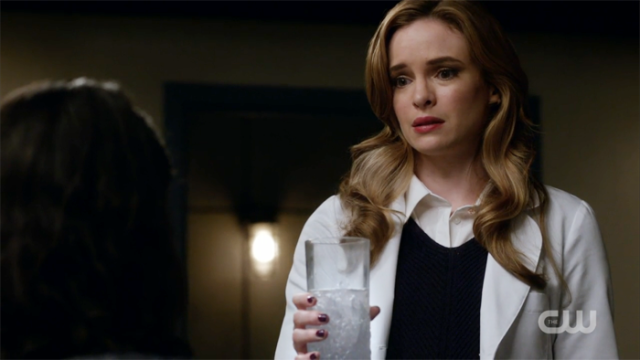 She makes Cisco vibe her so that she knows she won’t become evil, and he does, but he sees a Killer Frost vs Vibe battle and is worried, so he lies to her. However, Cisco is a terrible liar and eventually has to come clean about it. He implores Caitlin to tell the team so they can help, but she says it’s too late to save her. Which I still don’t understand. Barry has powers and he’s not evil. Jesse has powers and she’s not evil. HR is a version of Wells that isn’t evil. Even Magenta wasn’t naturally evil. I don’t know why she thinks that since she has powers and on one earth she was evil she’ll automatically turn evil. She’s discounting her own free will. It breaks my heart.

Side note, Barry complains to Iris about Wally wanting to be a speedster so badly, and Iris tells him to check his privilege because he doesn’t know what it’s like to be a human in a metahuman’s world. 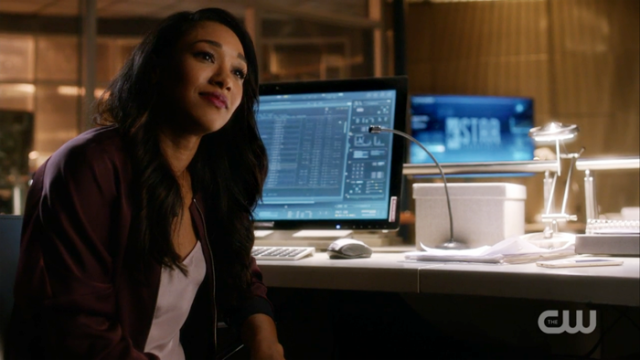 Yes please tell me again how hard your life is.

She herself doesn’t even really have much to offer these days, beyond clever strategy now and then.

That is, until Wally gets possessed by Alchemy and Iris punches him out.

When the team regroups about The Wally Problem, Cisco decides to out Caitlin. So she’s forced to reveal that she has Elsa powers. 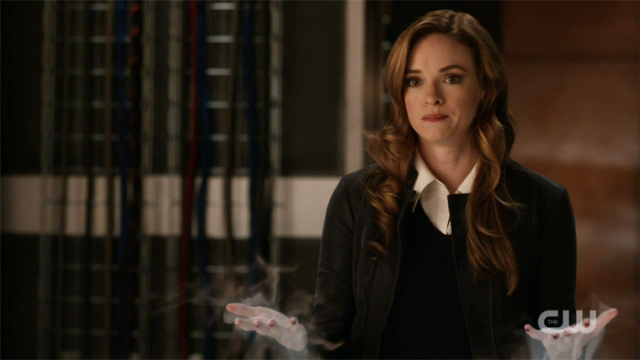 Have I made all the Frozen jokes already?

Caitlin yells at Cisco for outing her and storms off, and Barry follows. She uses more gay code by saying things like she tried to deny her powers and suppress them but it got to the point where she couldn’t ignore them anymore. And then, for reasons I will never understand, Caitlin apologizes to Cisco for getting mad about him taking away her agency and outing her to everyone.

Joe gets the SWAT team in place and they join Team Flash in the fight against Alchemy, using Wally as bait. They go into an abandoned subway, where a cult is worshipping Alchemy and his creepy mask and his Jigsaw-esque voice. A fight breaks out, Flash gets hit with some light beams a bunch of times, then a monster only he can see appears, and Wally turns into a pole? A lot happens very quickly, it’s actually very unclear what envelops Wally and makes him look like a lava tree. But the monster attacking Barry calls itself the god of speed so probably it’s not great.

Arrow 507: Oy with the vigilantes already

Arrow starts with a brand new vigilante stringing up some bad guys and delivering them to Star City’s new task force. Oliver is mad someone’s stealing his thunder, but Felicity says that maybe this new person is doing them a favor. 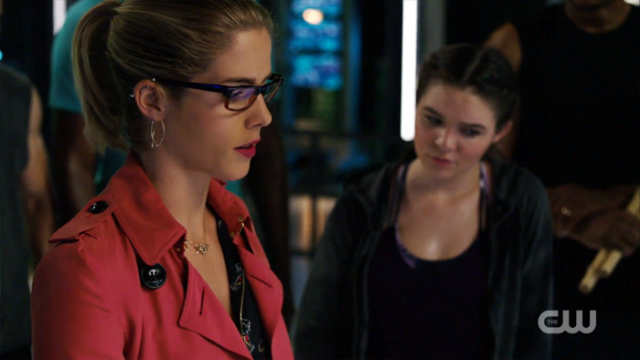 Though the last thing this show needs is more people.

Oliver calls the new player a psycho and Artemis (rightly) asks what gives him the right. I feel like maybe Ollie should have been like, “Hey let’s find this person and have a chat.”

Also I’d like to say that they all started using male pronouns for this new vigilante awfully early. This person is wearing a rigid body suit and a full face mask and using a voice changer. I mean I feel PRETTY sure it’s the new DA guy? But considering this team has seen a good many women kick ass and take names, it’s a little annoying they jump to the dude conclusion so quickly.

Anyway, they foil a bank robbery, come face to face with this vigilante, who originally doesn’t want to fight them but will if they have to, but Oliver makes it clear there ain’t room enough in this town for the both of them. 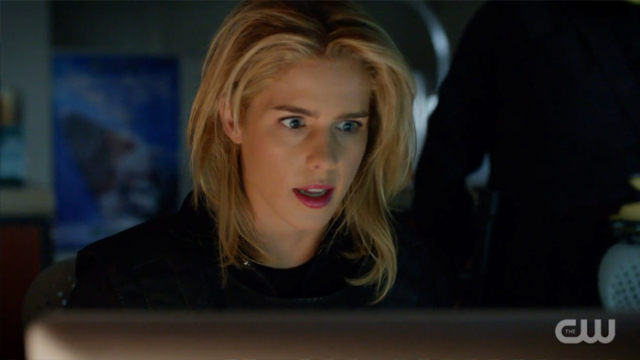 I know this isn’t what we were talking about but Felicity is prettier than Oliver, so.

The OTHER baddie that’s been plaguing us this season, Prometheus, remains a mystery (and also has been unnecessarily gendered) is still afoot, but the end of the last episode lead us to believe maybe it’s actually Quentin Lance. When he finds the throwing star, he finally confesses to Thea that he’s been blacking out, so she tucks him into a rehab. Also they all just run with the idea that he’s being framed/messed with and that he’s not actually Prometheus. 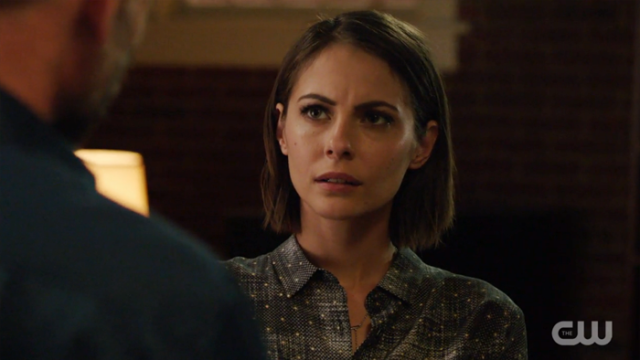 “Sure, whatever you say, drunk man.”

Also, Susan Williams flirts with Mayor Oliver Queen some more, and this time he flirts back. BUT she also plays pool so she might get along with Maggie Sawyer if you know what I mean. 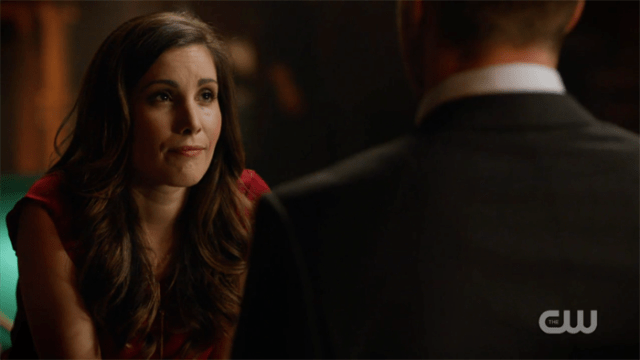 Changing the phrase from “Friend of Dorothy” to “Friend of Maggie” okay? Okay.

I feel pretty sure she’s up to no good. Then again I don’t trust anyone except the core team, and don’t even really like anyone right now besides Felicity and Thea.

And why not Artemis you ask? Because girlfriend is working with Prometheus, whoever they may be. 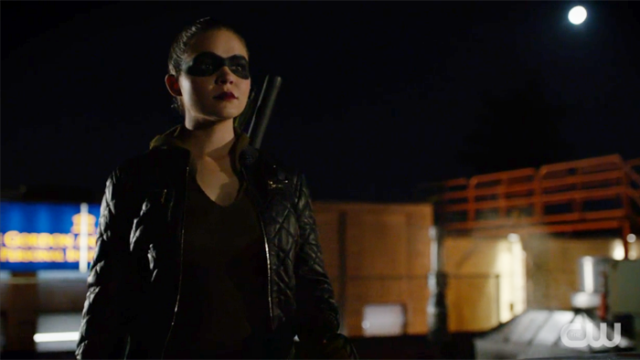 Does she play for the other team?

And last but definitely not least (especially this week) is…

Legends of Tomorrow 206: Cowgirl Up

This week we zip back to the wild wild west (also a Will Smith song that was stuck in my head the entire episode), to Colorado in 1874. 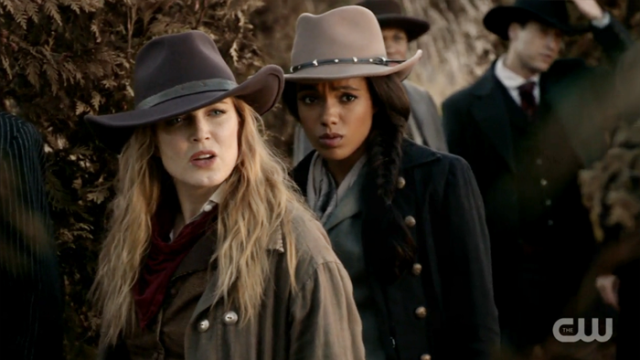 I love the way Vixen looks to Sara.

The Legends are following an aberration lead, and it takes them to their old buddy Jonah Hex, who is about to be hanged. Nate runs in without waiting for orders and ends up getting them in a tussle, but it’s fine because Sara’s a sharpshooter and shoots Hex out of his noose. Hex huffs about being saved by “a filly” and when Amaya sharply informs him that the “filly” he speaks of is their captain, he’s confused. Sara regards him coolly while he wraps his head around the fact that she’s in charge, and says, “Whoever breaks her is in for a ride.” Which is gross in every decade. Rory lets him know she’s also into other fillies, which…was dumb and unnecessary, but Sara lets it slide because it’s better he know he doesn’t have a shot. She waits out their conversation with the patience only a queer woman who has been around men who think they’re tough shit even though she could kick all their asses her whole life could muster. 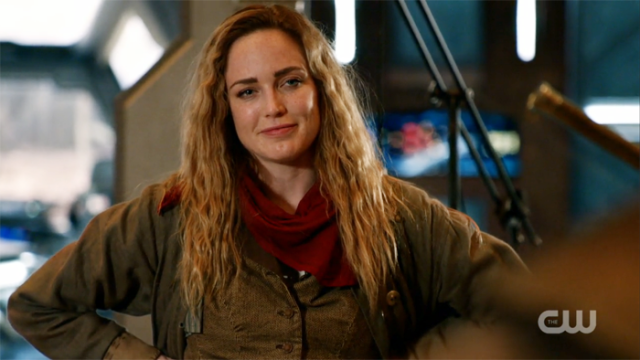 Once they stop discussing her personal life, she gives them all their assignments, sending Mick to the saloon and Amaya to watch over him. Stein’s been getting headaches so he’ll hang back, and the rest of the boys are sent to pretend to be accountants and see what they can learn.

At the saloon, Amaya hates her assignment a lot. 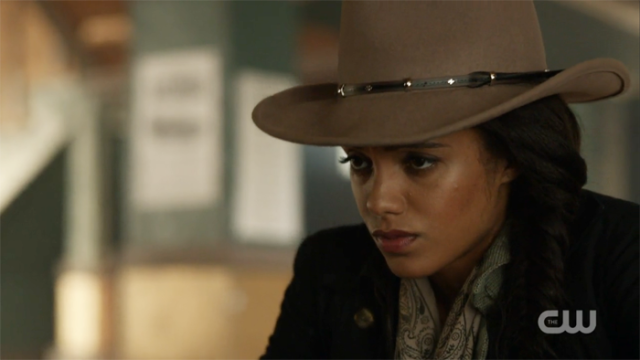 I LOVE HER FACE SO MUCH

Especially because Rory is befriending Turnbull, the man he was supposed to be fighting to lure him outside.

So she takes shots until Hex loses his patience and brings the fight to them.

After the fight, Sara tells Hex to man up and follow her orders, and he says he can’t because he’s on a mission for revenge. He doesn’t think she can possibly understand, but she can, because of the whole #JusticeforLaurel thing. 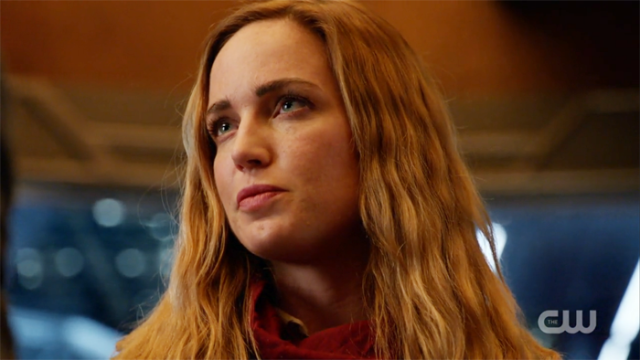 “I mean she literally couldn’t move. And then was stabbed. It was absurd.”

Amaya goes to talk to Mick and says that she saw him lose control during the fight, but he insists it’s just the real him, that he’s an animal. Amaya, knowing plenty about animals, tells him that they’re not vicious by nature, and that he can control it, but he’s not so sure. He doesn’t even really feel like part of the team, he doesn’t feel like they trust him.

But Sara trusts him enough to include him when she gives out more orders. Hex is impressed but she quite literally tells him, “This isn’t my first rodeo.” 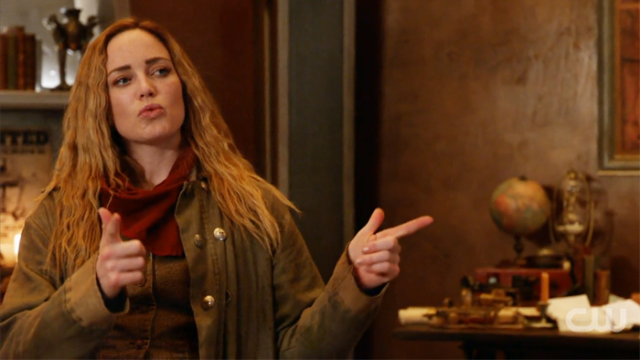 Eventually they foil Trunbull’s plan and stop him from using dwarfstar to start his own country and all’s well that ends well. Hex is impressed and actually gives her a compliment, saying that she is a better captain than most men would be. To which she responds what I imagine she’s been holding in all this time: “Good thing I’m a woman then.” 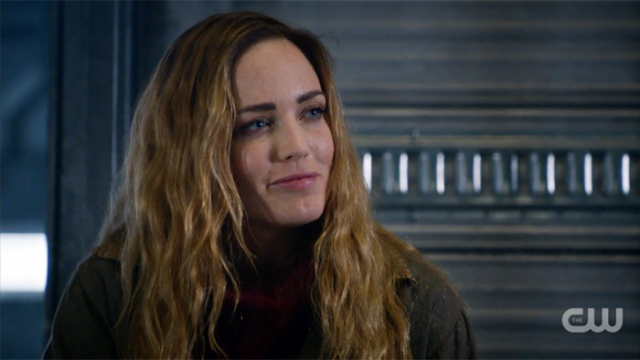 THE FUTURE IS FEMALE

Ray uses the recovered dwarf star to make new suits for him and Nate so maybe they’ll both stop whining now, and Sara comes in to tell them to quit broing out (her words) because their friends in 2016 need their help. 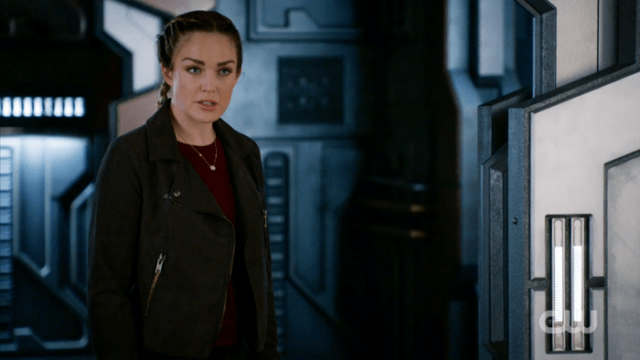 “My gaydar pinged somewhere around National City, 2016, we’ve gotta check it out STAT!”

We still have two weeks to go before the crossover, but I’m VERY excited about it.