Kara tries to explain that she’s desperate; that Nyxly having magic is more than Kara knows how to handle, and if she gets all the totems she’ll be virtually unstoppable.

Lena points out that it’s not just Nyxly’s magic that makes her dangerous, it’s the fact that she’s cunning and cruel. And the way they’re going to beat her isn’t by matching her in her cruelty, but by doing the right thing. 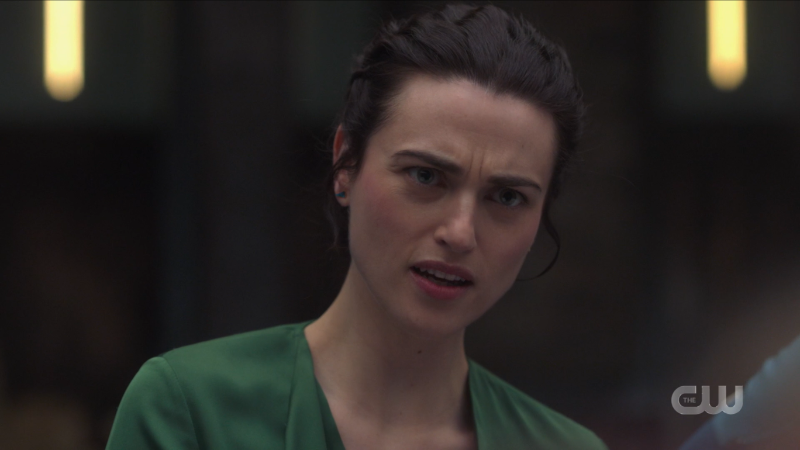 “Am I on MTV’s boiling point? Am I being Punk’d? I know you’re not suggesting the same course of action that painted me as a quasi-villain for an entire season IN FRONT OF MY SALAD.”

Lena explains to Kara that hurting people unintentionally sort of runs in her bloodline and she wants to end the cycle. But she has an idea for how to figure out if what they do IS the right thing. She wants to come out. As a witch. 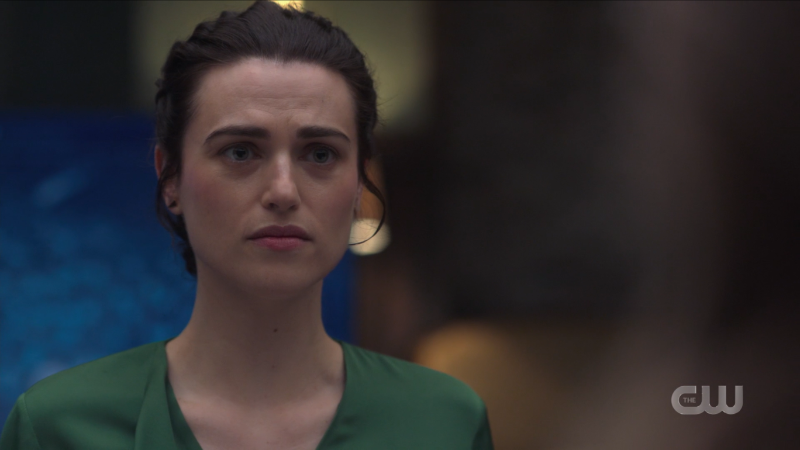 “I’m going to need you by my side in case I experience some hexophobia.”

And she wants to compromise. Instead of removing ALL the humanity from everyone affected by the totem, they’re going to affect MORE people the same amount, the goal still being the same: to overwhelm Nyxly. And they’re going to let CatCo report on it all, because the public should be able to weigh in on whether their choices were the right ones, and help them learn and grow as a team that unofficially represents the community. 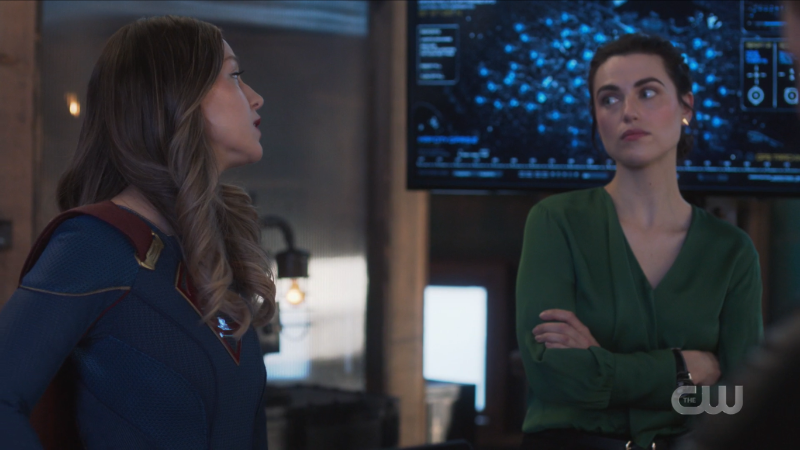 “WHAT COMMUNITY.” “National City in general, calm down.”

Lena goes outside to do her magic this time, and her spell spreads out and works exactly the way she wants it to.

Up in her spaceship, Nyxly is doing an excellent impression of me at the height of the pandemic, lying on the floor and wondering how exactly she’s meant to get anything done when there’s so much suffering in the world and she feels positively burdened by it.

She doesn’t care about being found out anymore, she just has to do something about this feeling, so she leaves the ship.

Meanwhile, Esme’s foster mom is so afraid of the violence brewing outside she decides to shove her brand new, teensy weensy foster child onto the front porch to protect them, despite them having a seemingly functional front door, and also despite Esme’s desperate protests that she doesn’t even know how she breathed fire at that man in the first place.

But in Esme’s time of need, once again a guardian angel shows up to protect her, this time in the form of literally Guardian, and her crime fighting girlfriend Sentinel. 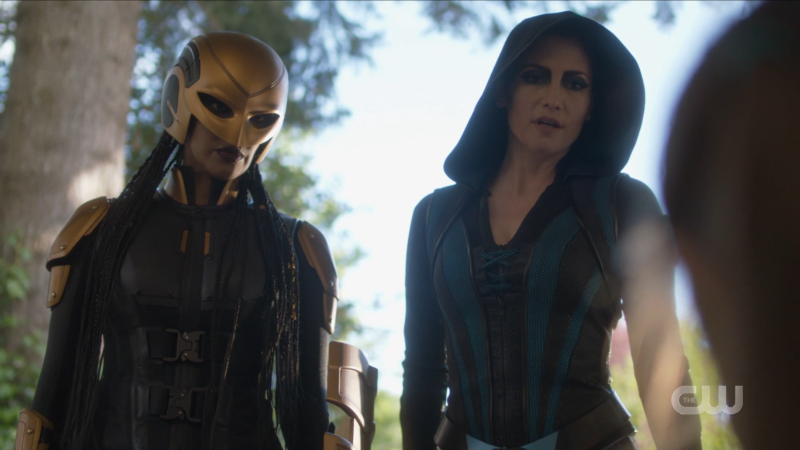 Across town, Supergirl is protecting people by doing the Dolores Abernathy walk directly into a spray of bullets, then artfully catching one in her fingers. 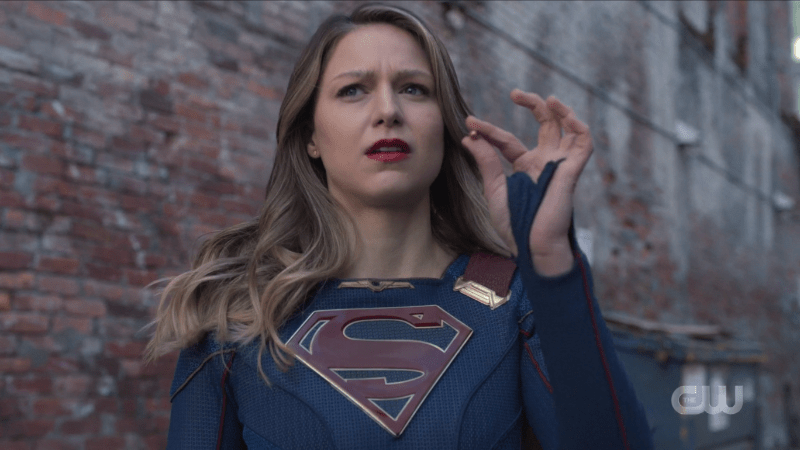 Is it hot in here or is it just Supergirl doing Super things.

The Superfriends get a hit on Nyxly’s ship, so when Nyxly restores the city’s humanity and the totem falls to the ground, Supergirl easily catches it, so pleased her and Lena’s plan worked. 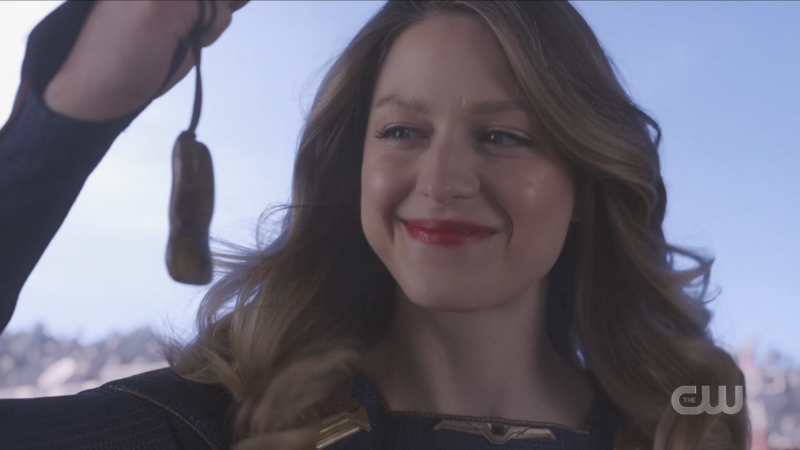 Back at the Tower, Lena has some ideas for how they can track another totem, since all the totems have the same energy, but the problem is, she only has enough energy for one, so they have to choose what’s next. Especially since they don’t plan on activating them, just keeping them from Nyxly, so it’s not like they have to go in order. (Since I believe Nyxly said Hope is the next totem she’s going after.) Nia wants them to go after the Dream Totem because she thinks she’ll be able to lend a hand with her particular set of skills.

Later, Lena is chilling out in the Tower, feeling comfy in her new home away from home. 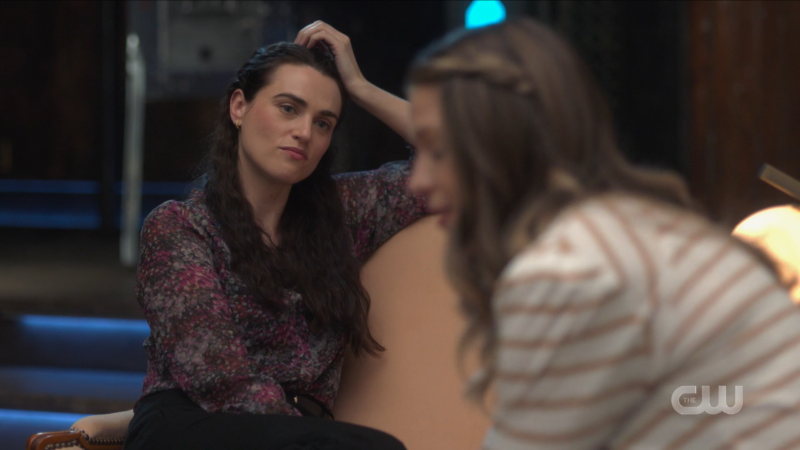 Lena’s commitment to sneakers and tucking her legs under her after YEARS in heels professionally crossed is giving me life.

Kara brings her some food, just like they used to do, and Kara is grateful CatCo reported on their decisions today so they can debate their choices out in the open. Lena thanks Kara for pushing her out of her comfort zone, and Kara thanks her for compromising but setting clear boundaries.

They share potstickers and it’s so very cute and comfortable. It’s amazing how relaxed they both are now that there are no secrets between them. 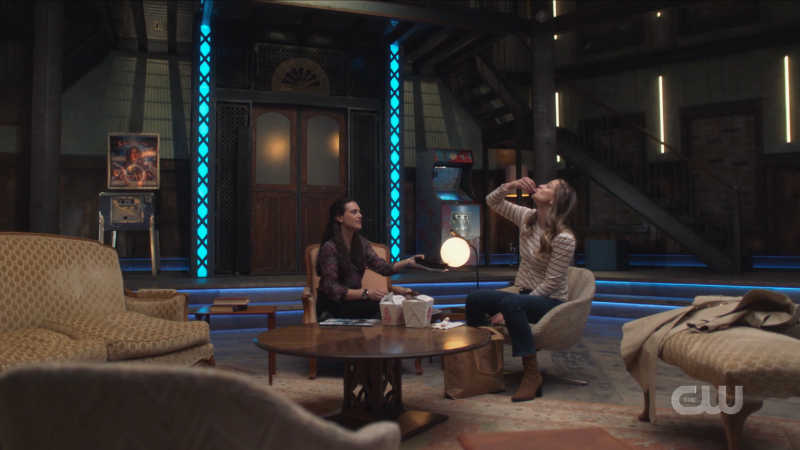 After getting out of her Guardian garb, Kelly goes to check on Esme as she waits for social services to pick her up, but this time she brings Alex. She introduces Alex to Esme as her girlfriend and Esme shyly says, “Hello, Miss Danvers” and it’s very cute. Kelly pulls Alex aside and explains that her foster parents are essentially sending her back, and Alex is furious, especially after the stunt they pulled. 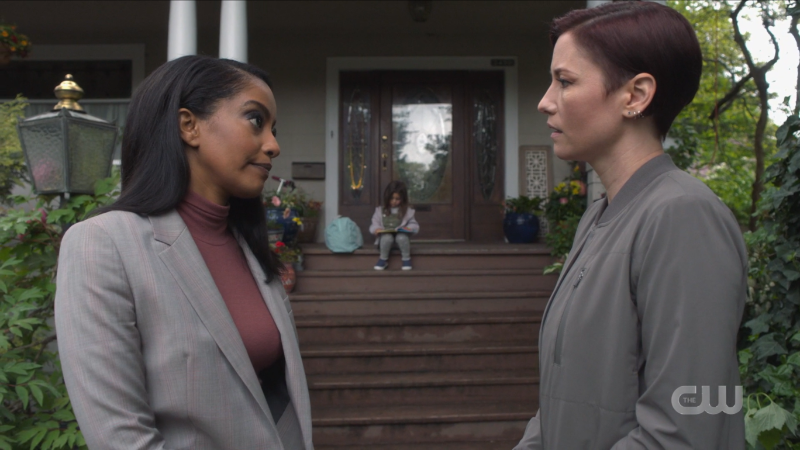 THIS is the gay agenda.

Esme just shrugs about it though. She’s already been moved around so much in her young life, she’s pretty sure she’ll never have a real home. Alex and Kelly look at Kelly’s bracelet, look at Esme, look at each other. They have an ENTIRE conversation without saying a single word. And considering Alex broke up with Maggie because she wanted to have kids someday and Maggie didn’t, and Kelly being drawn to all these children and wanting to be able to help them, PLUS the two of them being uniquely capable to accept and help little Esme with her alien powers, this decision feels inevitable. They never do say it out loud, but it seems clear when Alex holds out her hand and says, “C’mere kiddo,” and her and Kelly each take one of Esme’s hands. 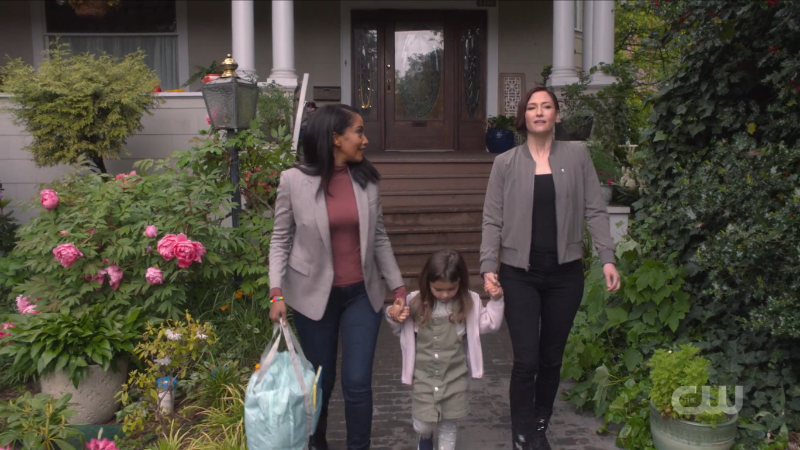 When I say this is #goals I am speaking quite literally.

And Nyxly is back on her totem-hunting bullshit, but I don’t even care right now because this is some beautiful Kelly and Alex relationship development and is so much better than when Alex was going to find a baby on the internet. A too-smart-for-her-own good alien child with a big attitude and a bigger heart? Absolutely this is the perfect child for Alex and Kelly. And if we had more than six episodes left, I might be concerned about how this would affect their integration into the rest of the team, but instead I’m just excited for how well this will set up their (hopefully) inevitable happy ever after as lesbian supermoms.

Valerie has written 374 articles for us.