Go Vegan! with Sarah Kramer, a vegan cooking iPhone and iPad app from Arsenal Pulp Press, will make everything you cook more delicious.

Go Vegan! includes 50 vegan recipes from vegan cookbook author Sarah Kramer, with an additional 10 that haven’t been previously published. It has a good variety of recipes, including typical vegan cookbook options, such as lentil burgers, cilantro ginger tempeh, and kale salads, and items I hadn’t seen before, such as Nanaimo bars, cashew creme fraiche, and soy-free gluten-free breakfast sausage. It’s also really easy to find which recipes are soy-free or gluten free. In addition to recipes for meals, there are guides to things like egg replacers, making fake Parmesan, and milk alternatives. 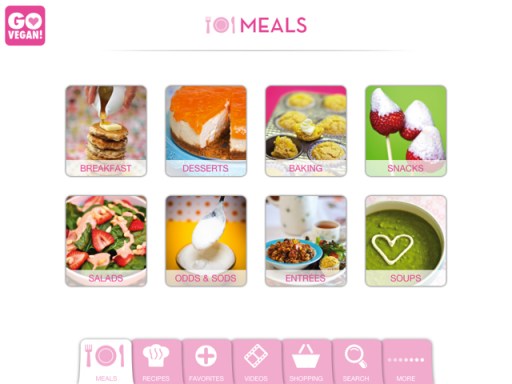 I also feel way more likely to use an app like this for everyday cooking over one like Epicurious, which has infinite options, most of which are definitely not vegan, and many of which are not lactose-intolerant-soy-allergic-friendly. While Go Vegan! is $6.99 in the app store, and Epicurious is free, you get a much easier-to-access vegan cookbook of quality with Go Vegan.

Things I loved about it:

+ Most, though not all, of the recipes have video or audio, and all have pictures. While an app is already a step up from a cookbook, in that it’s less awkward to whip out in the grocery store when you’re trying to remember how many tomatoes you need, the added multimedia element is excellent. There are also additional videos with general cooking tips.
+ Everything to do with the actual recipes, which all look really delicious.
+ Everything to do with Sarah Kramer, whom I have a bit of a crush on.
+ The minimalist, uncluttered design.

Things I did not love about it:

+ The shopping list itself doesn’t have a smart way of combining ingredient amounts from various recipes to tell you the total amounts you will need to purchase. You can sort by ingredient (such as oil) or by location in the store (such as tinned goods or baking, nuts, and spices) but you still have to add to figure out how much of everything you will need. (If you want to double the size of a recipe, you will also have to do this in your head — adding it twice to the shopping list is not an option.)
+ There is no way to zoom in on the text on the recipe screen. It’s black (or pink) on white and there’s enough contrast, but it seems silly that that standard zoom gestures do not work.

Visit Go Vegan! in the App Store. Don’t have an iDevice? We have vegan pumpkin pie for you anyway!

by Go Vegan! with Sarah Kramer

I’m thankful for pumpkins, for sugar, and for this pie. Don’t worry that it won’t look ready when you first take it out of the oven — it sets as it cools. 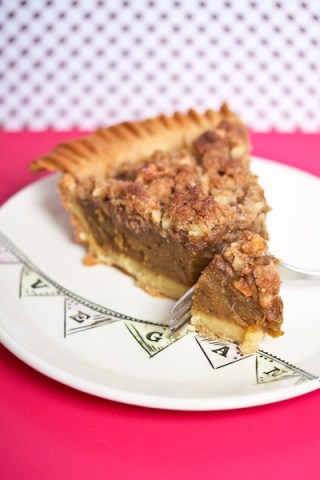