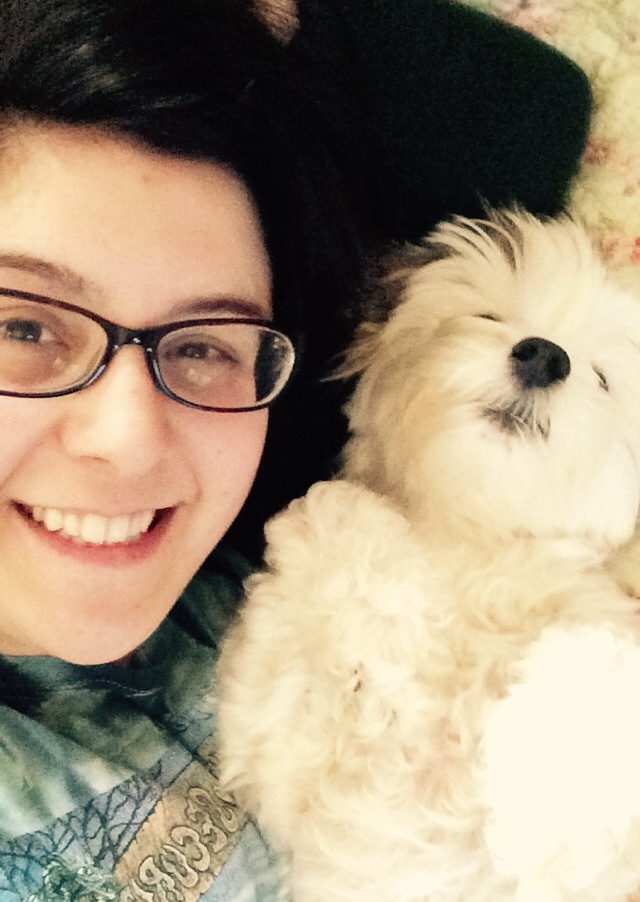 “Lizzy came to me when her previous owners decided they couldn’t take care of her anymore. I had always wanted a dog and she ended up being perfect for me. She is super chill, the perfect couch potato companion. The best thing about Lizzy is that she sings. It’s definitely more of a howl, but it’s really cute and it never gets old. She likes cuddling for hours on end (preferably wedged between me and the couch), watching the squirrels in our backyard, and walking in the park. When she first came to us, she was very shy and timid, but now she is hella sassy and I don’t think it’s possible for me to love her more than I already do.” 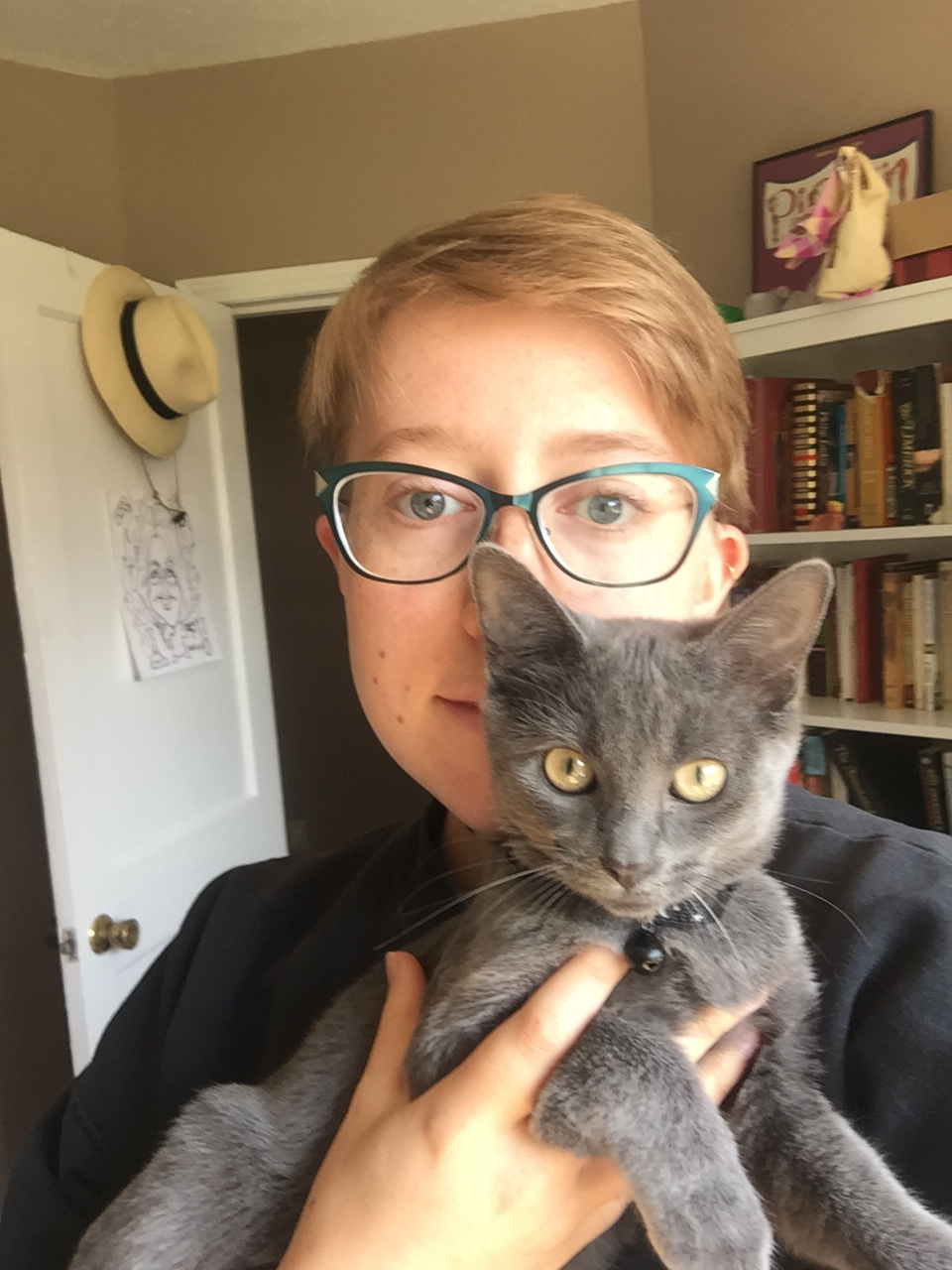 “Agatha was a last-minute decision before my move to Tuscaloosa in late July; a hometown friend had adopted her and then turned out to be allergic, and as a lifelong lover of other people’s cats I swooped in and took her South with me.

Yes, I like Agatha Christie.  No, I have not seen the Doctor Who episode.

Agatha’s favorite activities include biting my toes when I’m trying to get writing done, and playing fetch with a pipe cleaner.  She does not have her own Instagram, but she’s pretty much taken over mine (@truthinjest42, if you want to see pictures of her hanging out in the pantry, etc.).  If I tried to tell you how much she’s improved my life in the last two months, you would laugh at me for being maudlin.  So I’ll just say that she is the World’s Best Kitty and I love her with a ridiculous and undying love, even when she attacks my hands while I’m typing, like she is right this minute.” 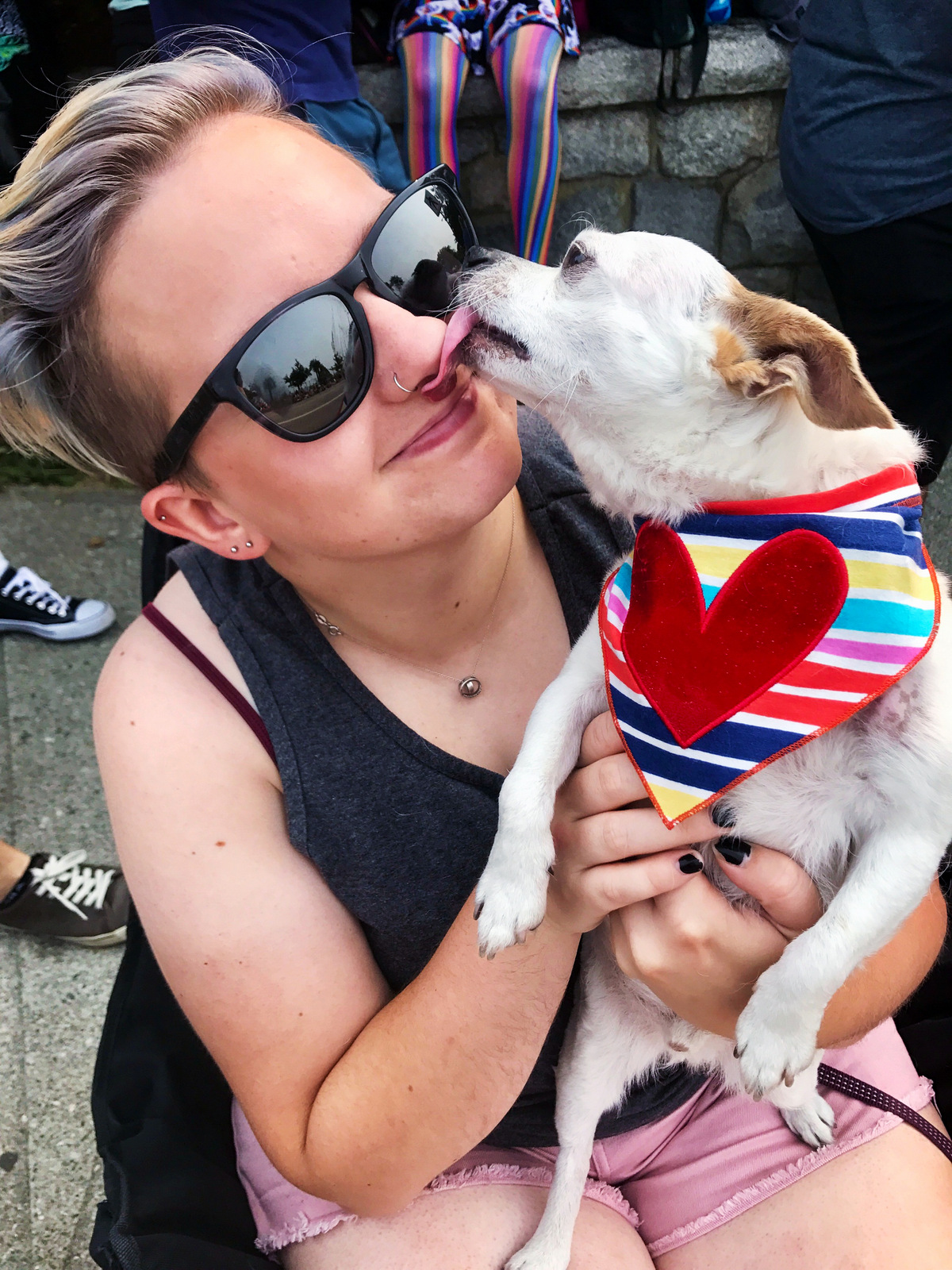 “Benny is a rescue mutt from the streets of San Bernardino who came to Vancouver, BC in 2012 through a local rescue organization. We were instant best friends and he’s been my main dude every since (but shhh don’t tell my fiancée. She gets a little jealous). Benny spreads nothing but joy and white dog fur to everyone he meets. He gives me purpose on the days I don’t feel I have one. You can check him out on Instagram at #dailybenny.” 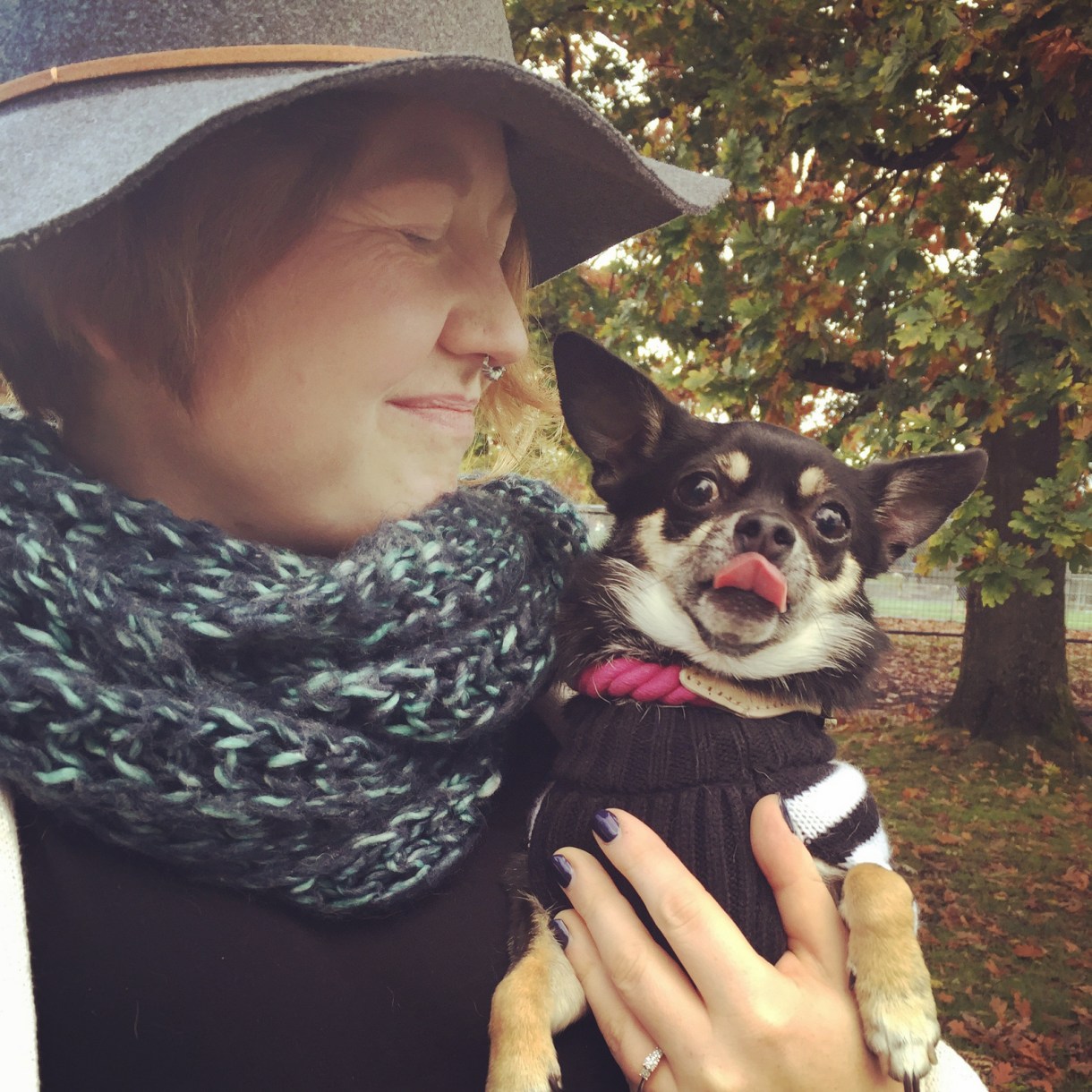 “One hot summer day in July, Ruby came on an airplane all the way from Ontario and we fell in love instantly.  She gave me a reason to wake up each day after I came out of an abusive relationship. Through the past 5 years, we’ve found new love and accomplished great things. Her favourite toy is a squeaky blue hedgehog that my fiancée bought her at the beginning of our relationship.” 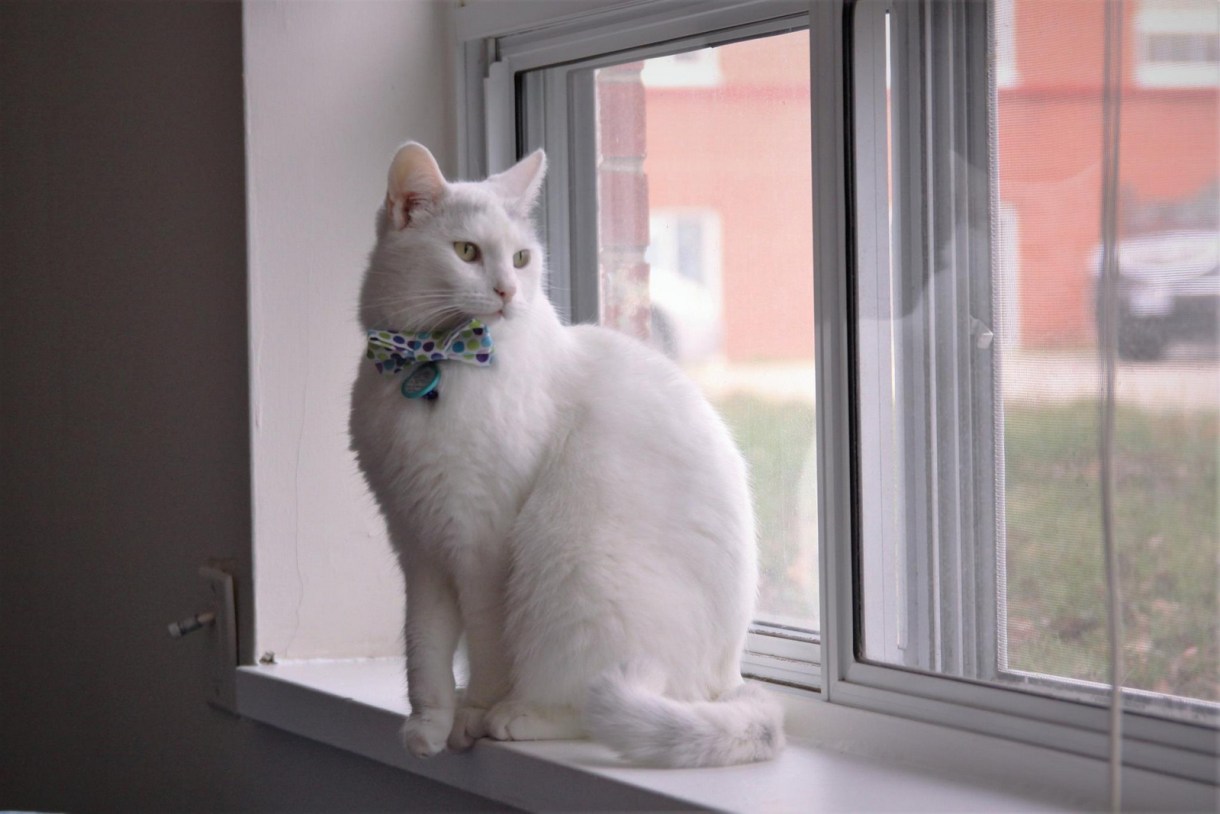 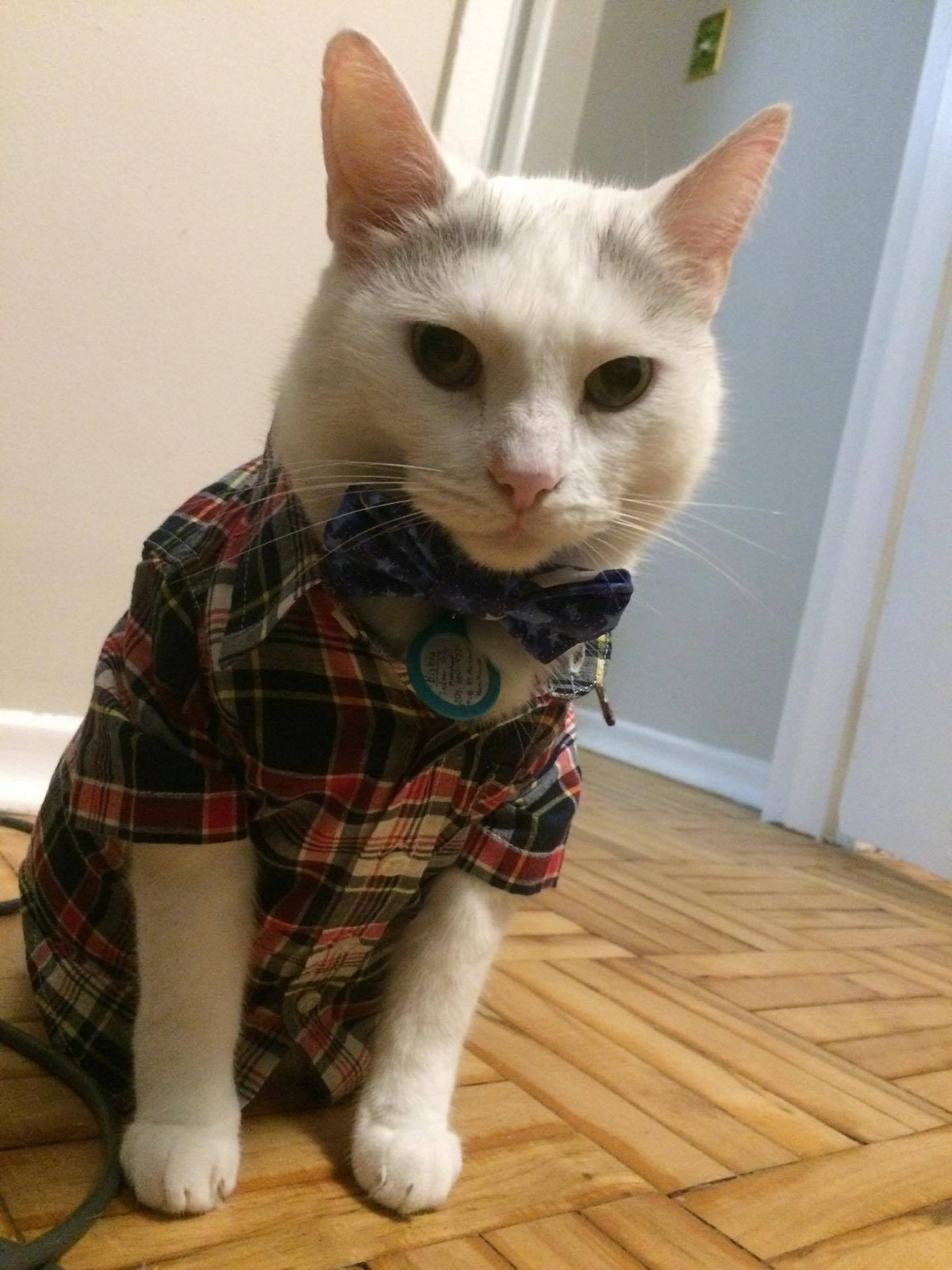 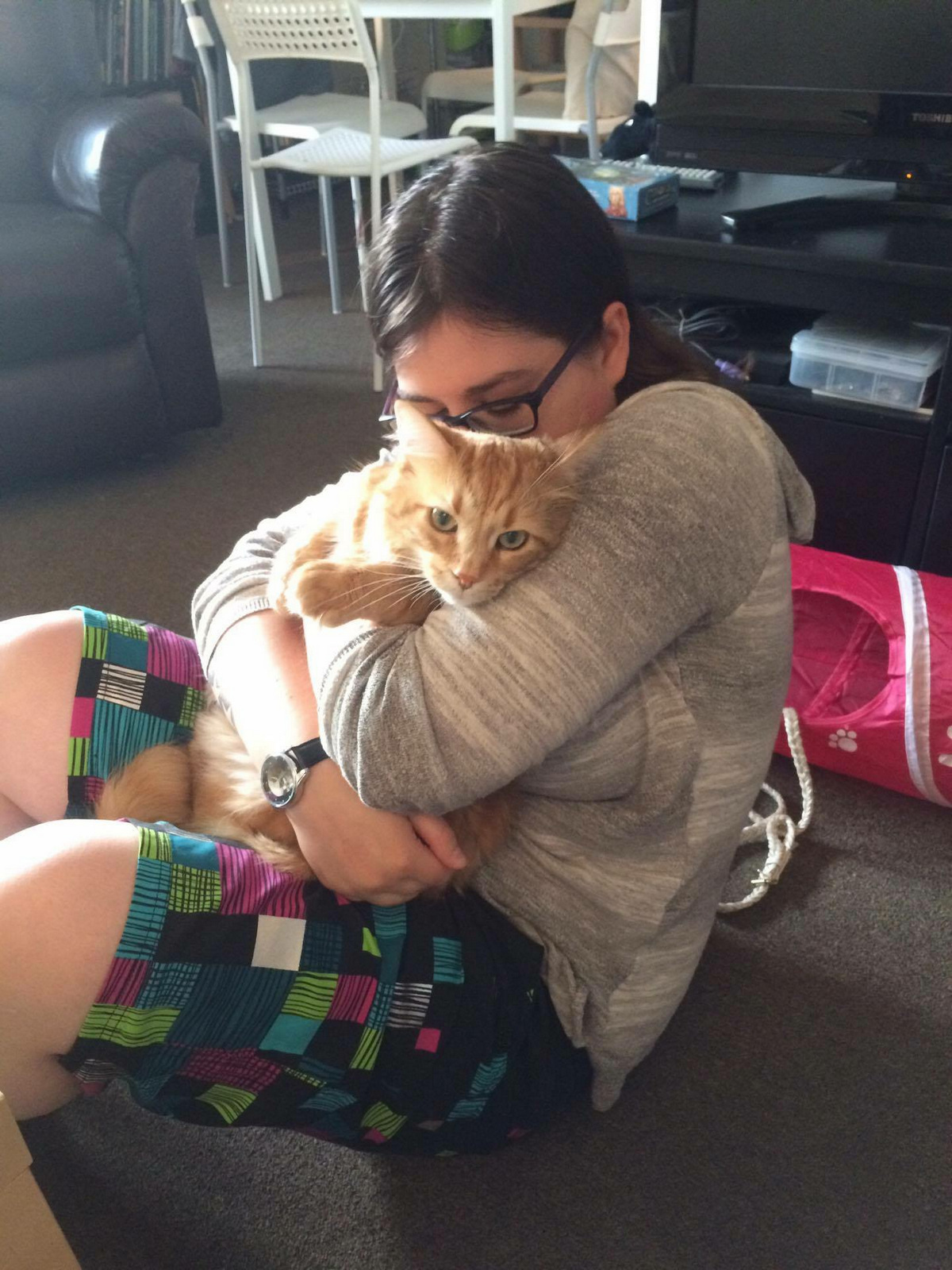 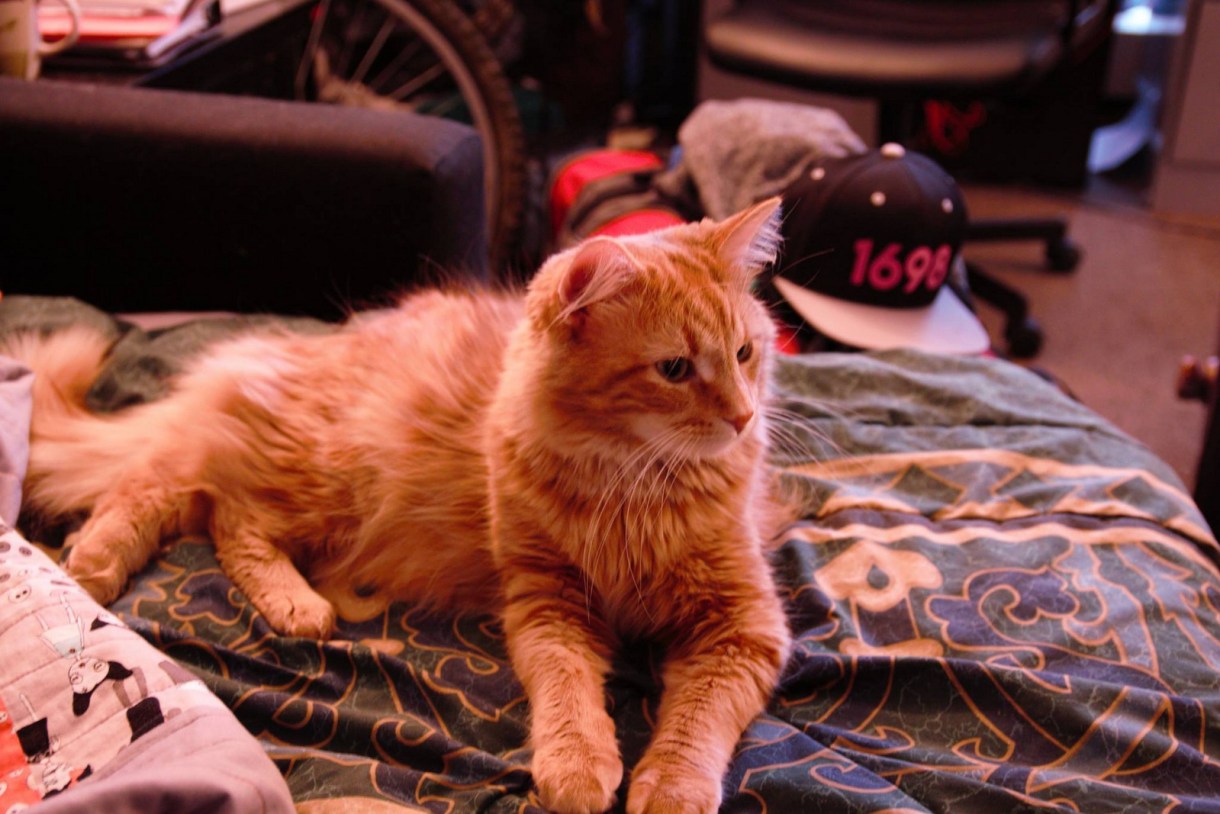 “Bishka was found wandering the streets of my office admin’s neighbourhood and was put up for adoption after my admin’s husband developed a bad allergic reaction to the cat. I was in Lithuania when my admin sent an office email advertising the cat, so in a classic move, I Replied All in a frantic email, saying that I’d take the cat if someone could look after her for one month until I was back in the country. I got her on November 7, 2016 and I don’t know how I would’ve survived the stress of the US election if I didn’t have this sweet and sassy girl to keep me company. 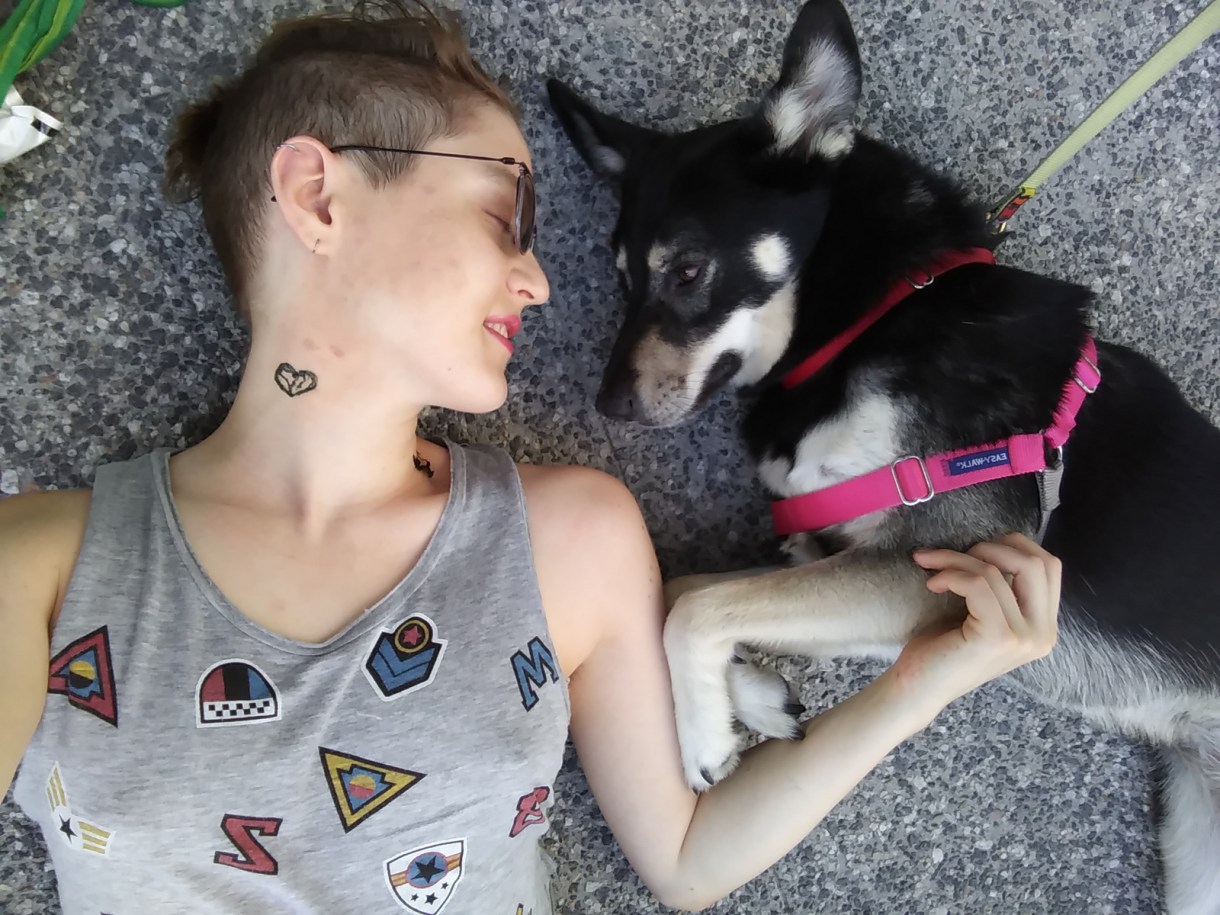 “I’m a pansexual genderqueer graduate student who can’t afford dog friendly housing. I was walking back from my favorite plant shop with my new spider plant, my first new pet in a long time. I saw this fabulous dog tied to a gate lying on her side and wagging her tail. Approaching slowly, I quickly found she wanted to exchange kisses for pets. After a while, someone who worked next door said his boss wanted him to call animal control. I told him I’d wait with her until her family came back. Athena and I laid on the cool stone, relaxing. Her mother and boy came back, which is how I know Athena’s name. I gave them a quick heads up about the averted animal control call, and the boy thanked me solemnly. So no, Athena and I don’t live together, but for a little while on a Sundayafternoon, I was her human.” 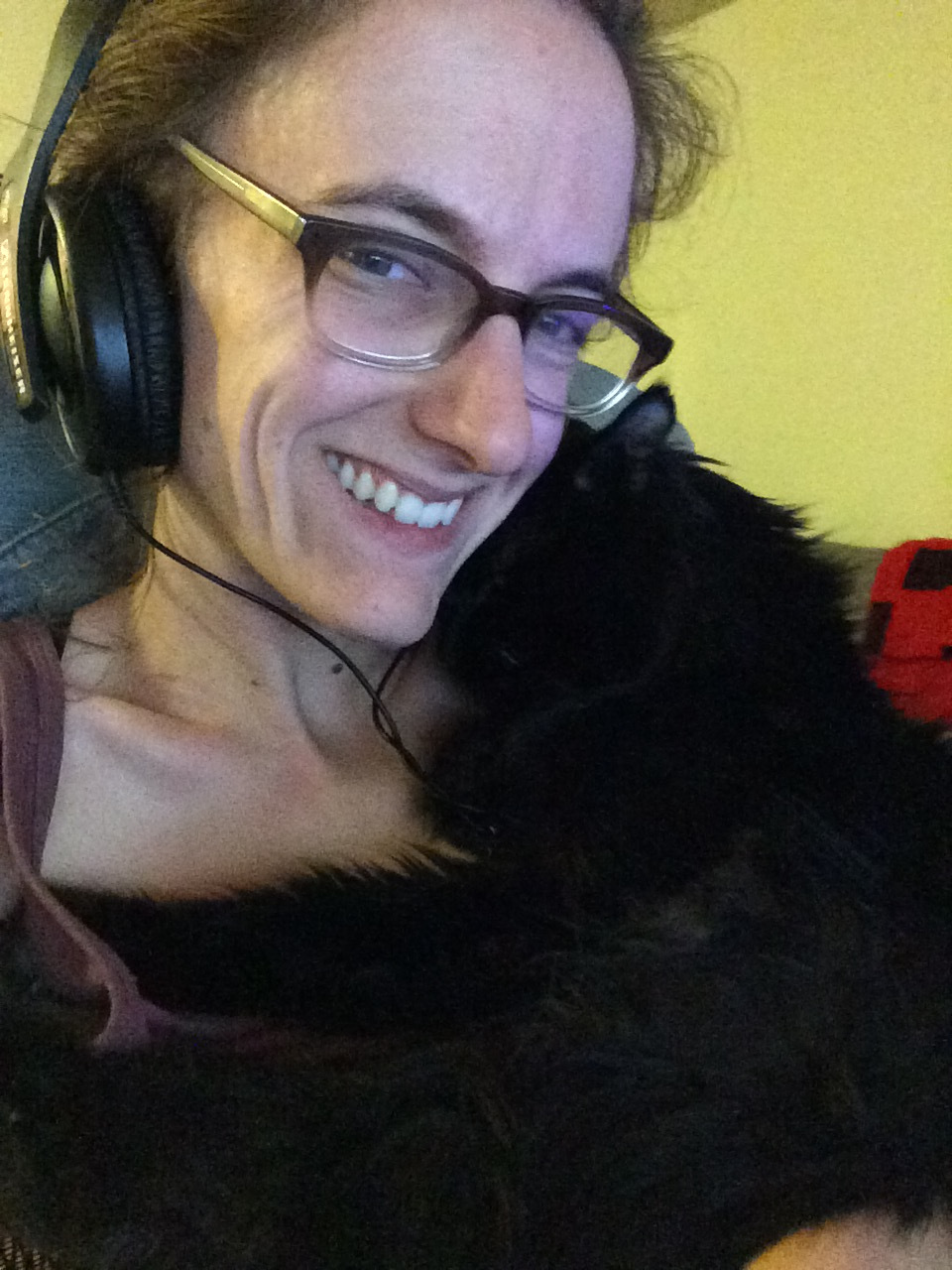 “I adopted Bri (short for “Umbreon”) four years ago and she’s the cuddliest and chillest old lady cat. Our favorite activity to do together is 3D modeling or playing Overwatch while she sleeps in my lap, occasionally waking up to loudly beg for treats and/or swat at Overwatch character Bastion’s pet bird Ganymede.”

Eli and Bruno / My House 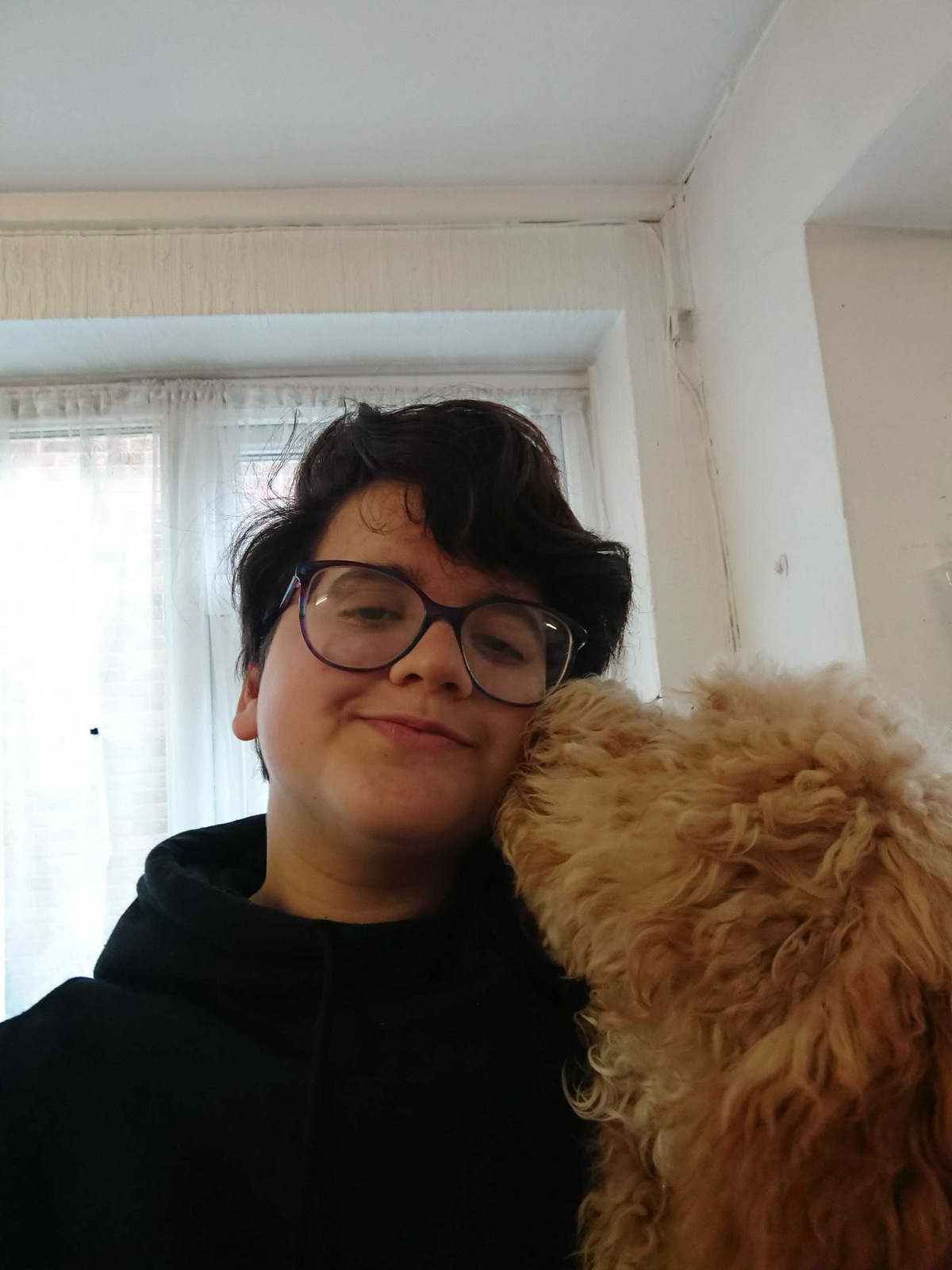 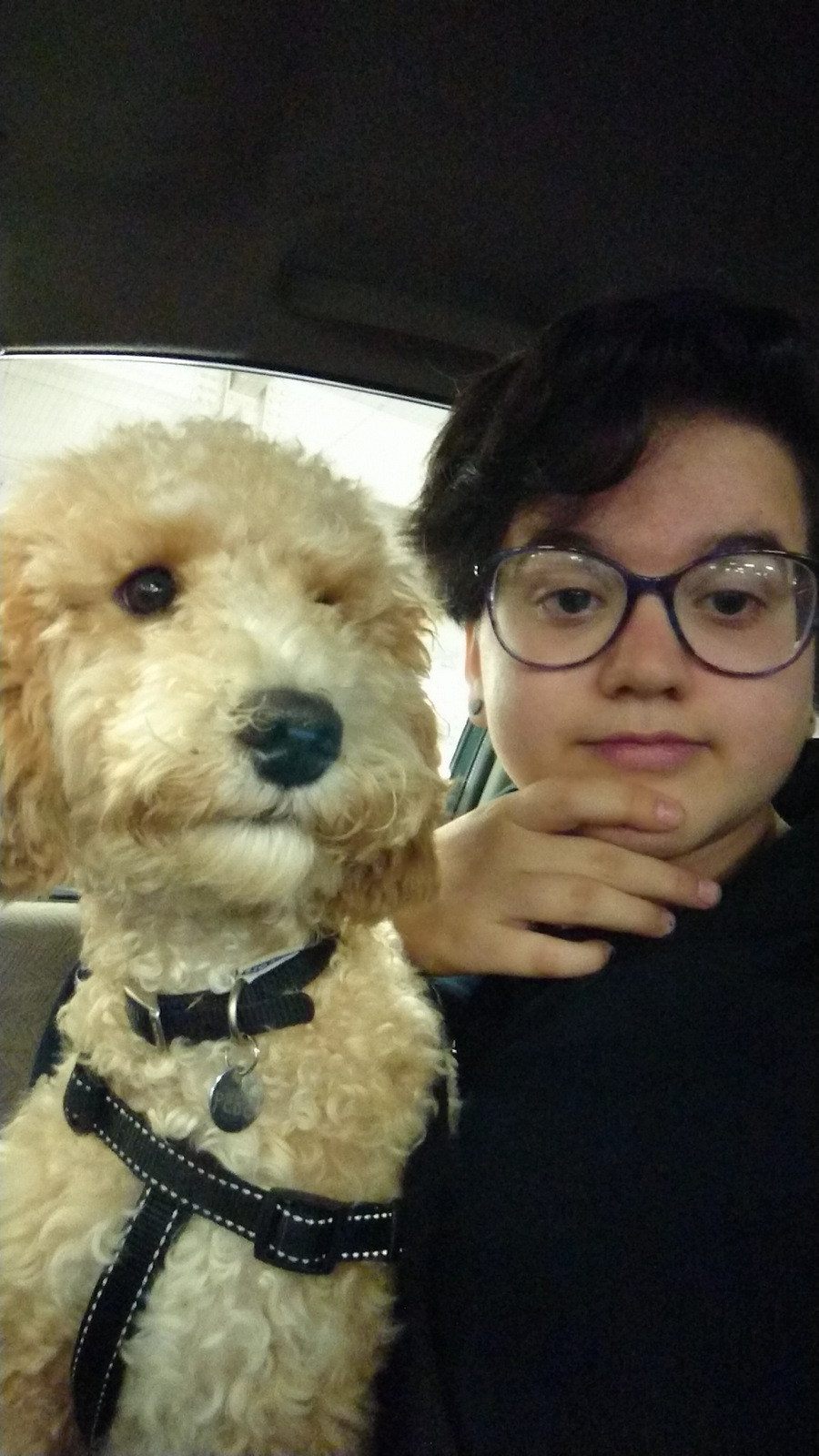 “Last year I had a breakdown, dropped out of college and didn’t leave the house for weeks on end. Until we got Bruno! He’s going to be a hearing dog when he’s older, so there’s a lot of training we have to do which got me busy again. He’s always so excited to see me when I come in the room (even if it’s only been ten minutes) which does wonders for my self esteem. I’ve also accidentally trained him to sit on my lap as soon as I sit on the floor. Now I’m going back to college and have plans for the future. He’s also leaving in a few months which I prefer not to think about.” 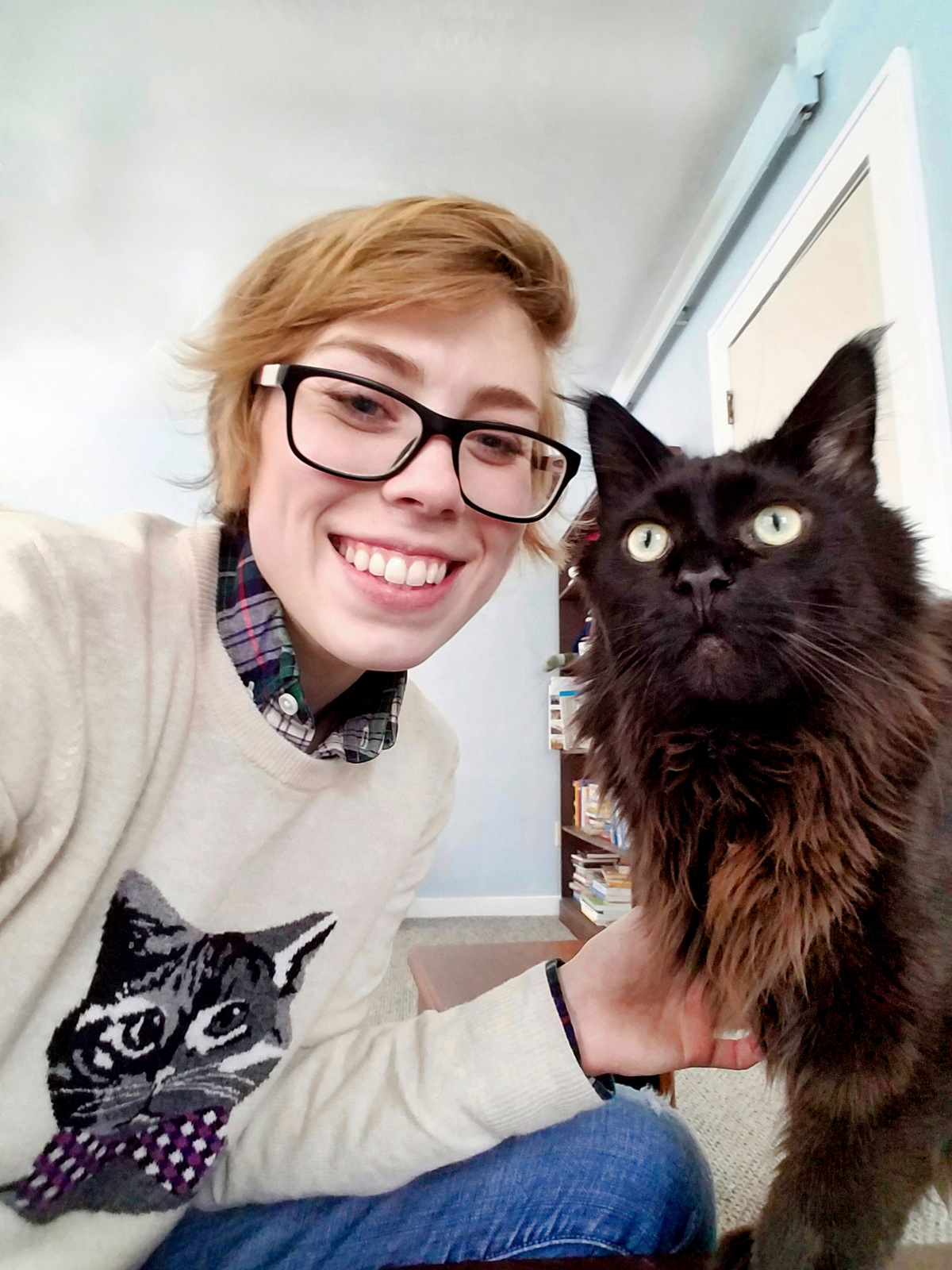 “Boris was raised as a show cat for the first year and a half of his life (before my girlfriend and I adopted him), but he doesn’t let his past career as a supermodel go to his head at all. He maintains a wide variety of interests and hobbies, including, but not limited to: devouring cans of Fancy Feast with an urgency unrivaled by lions attacking prey in the wild, sitting atop his carpet tree and gazing knowingly at the world below, staring through the window at birds and/or squirrels while flicking his tail wildly and making very menacing hunting noises, chewing on plastic bags, giving hugs by wrapping his paws all the way around my neck, purring enthusiastically one centimeter away from my face in the early hours of the morning, running in frantic circles across the carpet at unexpected moments, chasing feathers and/or red dots and/or his own tail, and meowing in a way that sounds uncannily like “hello.” Things he does not enjoy include: vacuum cleaners, walking on a leash, wearing hats, waiting until the second alarm goes off to be served breakfast, and being denied a third can of dinner at night.” 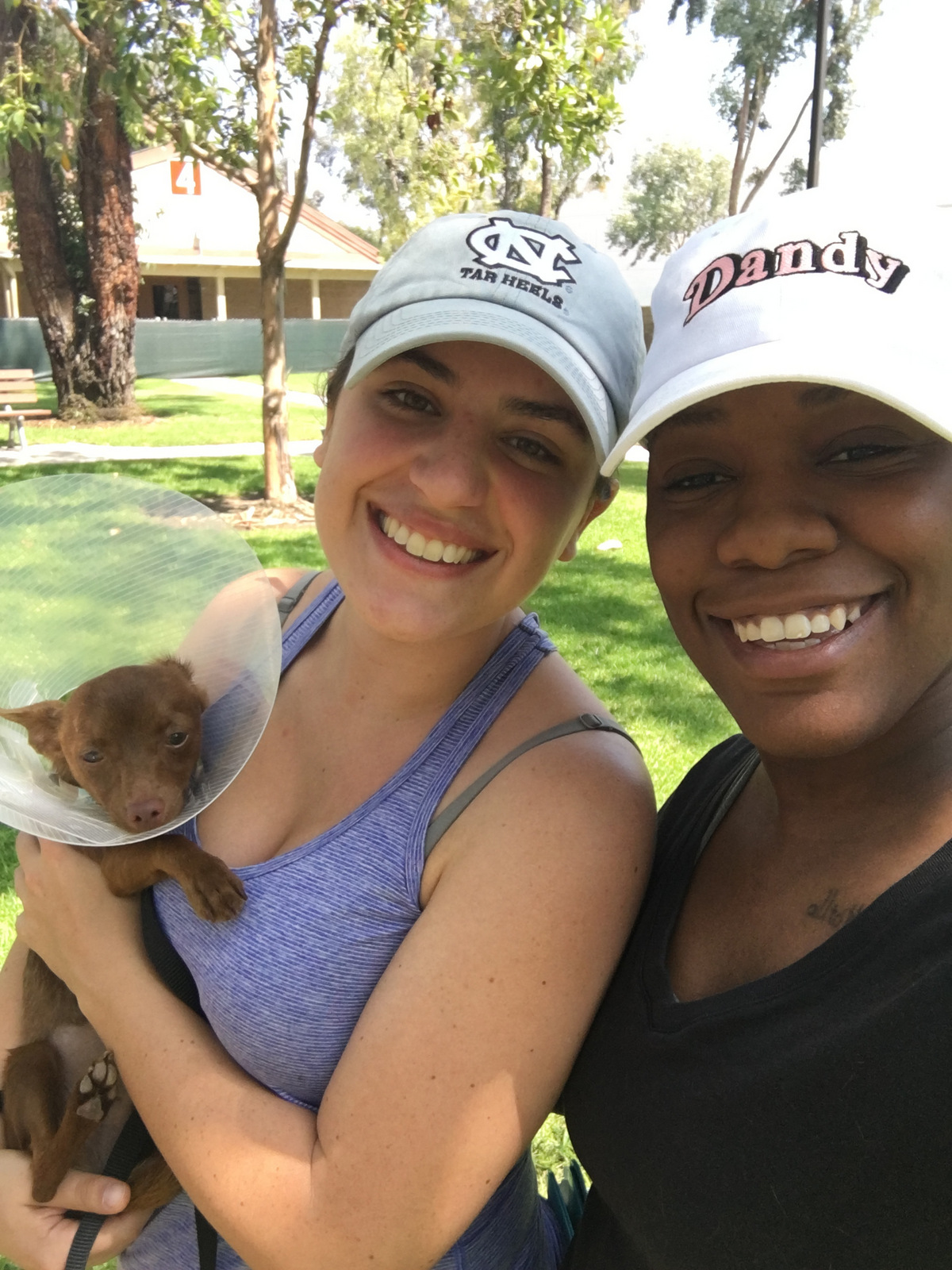 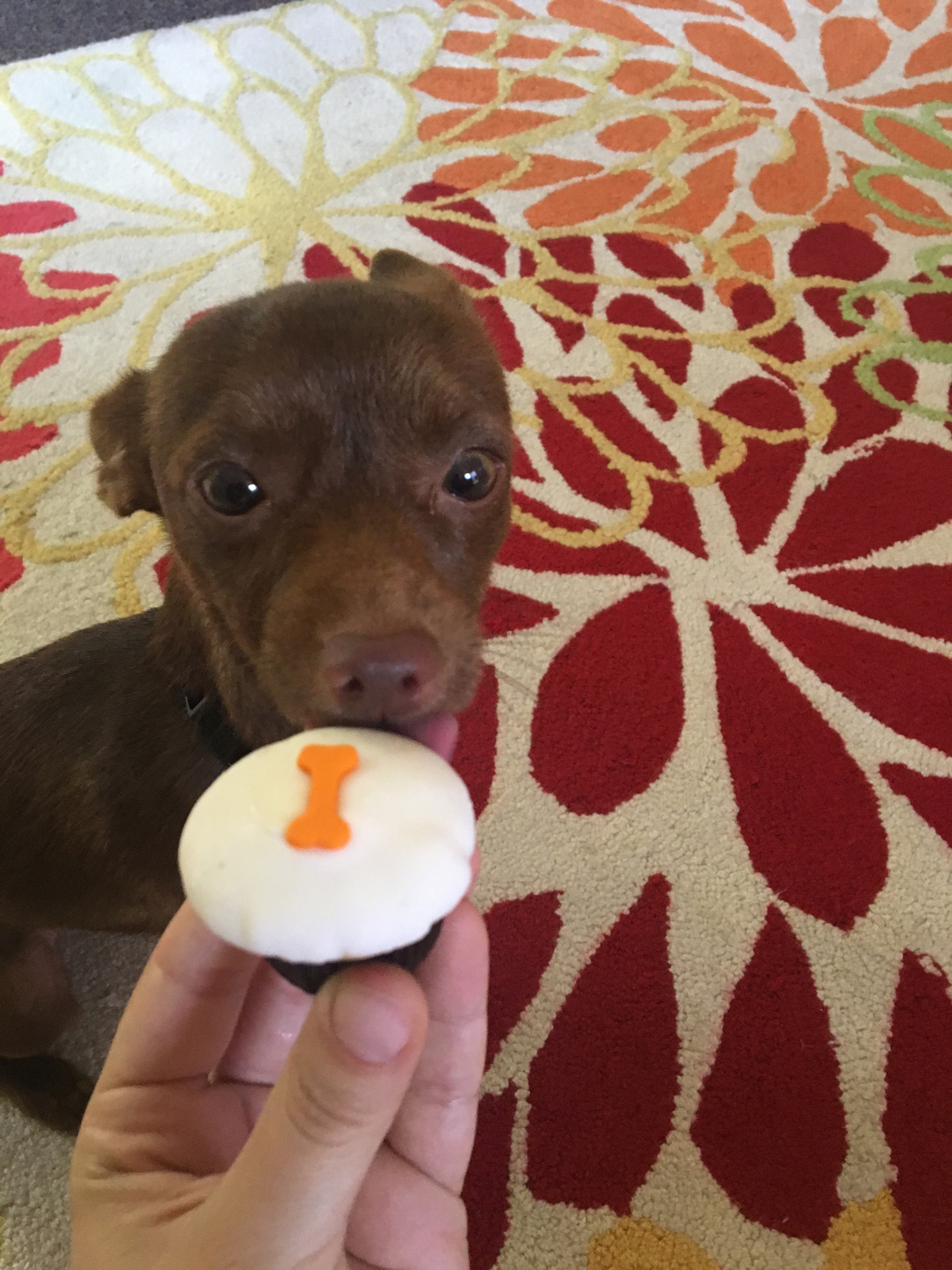 “My partner Adrian and I adopted our sweet pup Choco from a shelter in Irvine, CA on National Dog Day. The day started with Adrian trying to buy me a house plant to cheer me up and escalated into a trip to an animal shelter and then escalated into me looking into Choco’s eyes and falling in love and taking him home. All the other dogs were barking and jumping, but little 6 pound Choco was cowering in a corner with his tail between his legs and this pathetic cone on his head. I reached my hand into the cage and he walked up and leaned his sweet little head into my palm. That was it for me. The best thing about Choco is that he’s a quiet little cuddle bug. He’ll hop onto your lap and find the warmest crevice and drift off. The most unexpectedly excited person to hear about Choco was my grandma, who called me out of the blue and said “I HAVE A GREAT GRANDSON!” She said she has to call her friend Nancy to tell her she’s now outnumbering her in grand-“children.” We love Choco and we hope he loves having two moms!”