Oh, the token queer friend trope, one of the more recent and annoying patterns in mainstream queer representation. The idea is a show or movie wants to be inclusive, but still palatable, so only one person gets to be queer. Because, as we all know, queer people love exclusively hanging out with big groups of straight people.

While this trope is overused, poorly done, and, again, very annoying, it’s not without some truth. When queer people are first coming out their friends are usually straight! Or at least also closeted. In fact, it’s always confused me that while she was still closeted and self-hating Dana Fairbanks was palling around with a group of lesbians.

The problem is these mainstream shows rarely confront what this experience is like for the queer person. They rarely portray how hard it is to be that token friend.

Ruth Caudeli’s Second Star on the Right would be worthy of recommendation for this alone, for unpacking this trope and honestly presenting the difficulties of lacking community. What’s even better is the film goes beyond this mere representational milestone. It’s beautiful, it’s laugh-out-loud hilarious, it has two whole musical numbers, three whole Britney Spears references, and is just bursting with queer creativity! 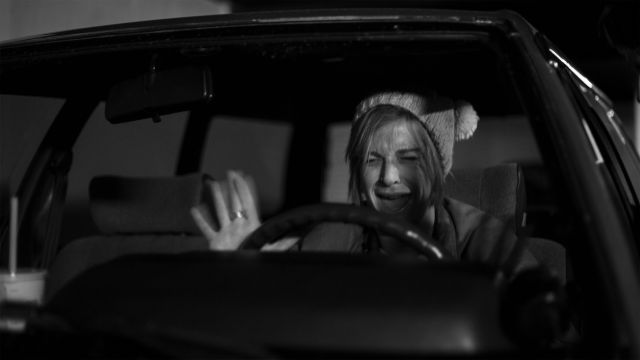 Emilia is our heroine, a bisexual experimental theatre actress struggling to make ends meet. She has three best friends, straight women at different stages of straight womanhood (bride-to-be, mother, divorceé) and a girlfriend, Mariana, who she refuses to call her girlfriend.

We’ve come a long way with bisexual acceptance in queer circles. The idea of a contemporary Dana Fairbanks telling her friend she has to choose feels very unlikely. (Is this my second Dana reference in a single review? Yes and I make no apologies.) But the classic talking points of bierasure are still thriving among the straights. Hetero women love to talk about bisexuality like it’s a puzzling scientific concept. Two genders?? More than two genders??? I don’t understand!

Emilia’s friends are no different. They constantly misidentify her as a lesbian and she has to get increasingly aggressive in her rebuttals. It’s unclear whether her distancing of Mariana comes from her own self-hatred or her knowledge that Mariana wouldn’t fit into her old life with these women. Either way, it’s not sustainable for a relationship.

And it’s a shame because Mariana is a fucking dream. She’s hot, she’s a photographer, she’s usually wearing a sports jersey and nothing else around the house, she’s very supportive, she’s hot. Watching Emilia screw things up again and again is as painful as it is realistic.

Also realistic? The fantastic sex scenes. They’re long and detailed and motivated by where the characters are emotionally and actual hands are used. Whether shooting these scenes or the friends hanging out, Caudeli’s camera floats around, casually capturing the reality of the moment in stunning black and white photography. The movie is like mumblecore if mumblecore had good writing.

But the very best moments are when the film breaks its stylistic patterns, when it shifts into color, or characters break into song, or we watch an extended montage of bachelorette party cell phone footage. The constant experimentation may be too much for some, it may at times feel unmotivated, but personally I was enthralled by the willingness to take creative risks while telling such a grounded story.

It’s exhilarating to watch a movie this bold in its craft that has as much messy bisexual representation as an episode of Are You the One.