It’s time to make yourself aware of the stage adaptation of  Newsies because it’s running from now until October 16 at the Paper Mill Playhouse in Millburn, New Jersey and because it will rock the fuck out. 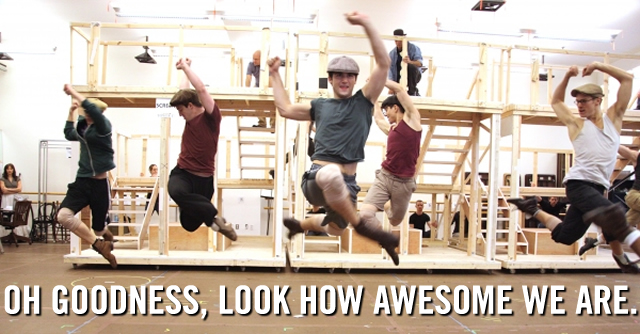 The film version of Newsies had a sad showing at the box office when it opened in 1992, but it gained a large cult following because it’s kind of spectacular despite it’s weirdness.

In the movie (which itself is based on an actual 1899 newsboy strike), Christian Bale stars as street-savvy Jack “Cowboy” Kelly, the informal leader of the newspaper-toting boys and the cutest lesbian you’ve ever seen. (Sidenote, Christian Bale singing is exactly what you’d think.) When the price of newspapers goes up a tenth of a cent, the boys go on strike. Hijinks and singing ensue, etc. It’s like Oliver! meets Pajama Game with the tiniest hint of Les Mis but also High School Musical.

Adapted largely by the original creative team, the new production includes both the songs from the movie and some new songs to flesh out the show a little more. The team also added an entirely new female character, which is good because, you know, there was like, one girl in the whole movie (Ann-Margret, though, for what that’s worth).

+Jeremy Jordan is not only starring in Newsies, but he’s also in rehearsals for the new Bonnie and Clyde show.

+Also, Andrew Keenan-Bolger, who I adore and who is playing Crutchie, posted a video from the sitzprobe that features a lot of singing as well as a video of a behind-the-scenes tour you’d probably like.

+You guys, the opening song is the eighth most played song in my entire iTunes library. I love this show.