Sara helps us put two and who together when she watches the alien in front of her put glasses on and transform into the one, the only, Gary “Demon Nipple” Green.

Back on the Waverider, Ava is stoically surveying the Legends and Nate can tell she’s bottling up her emotions. 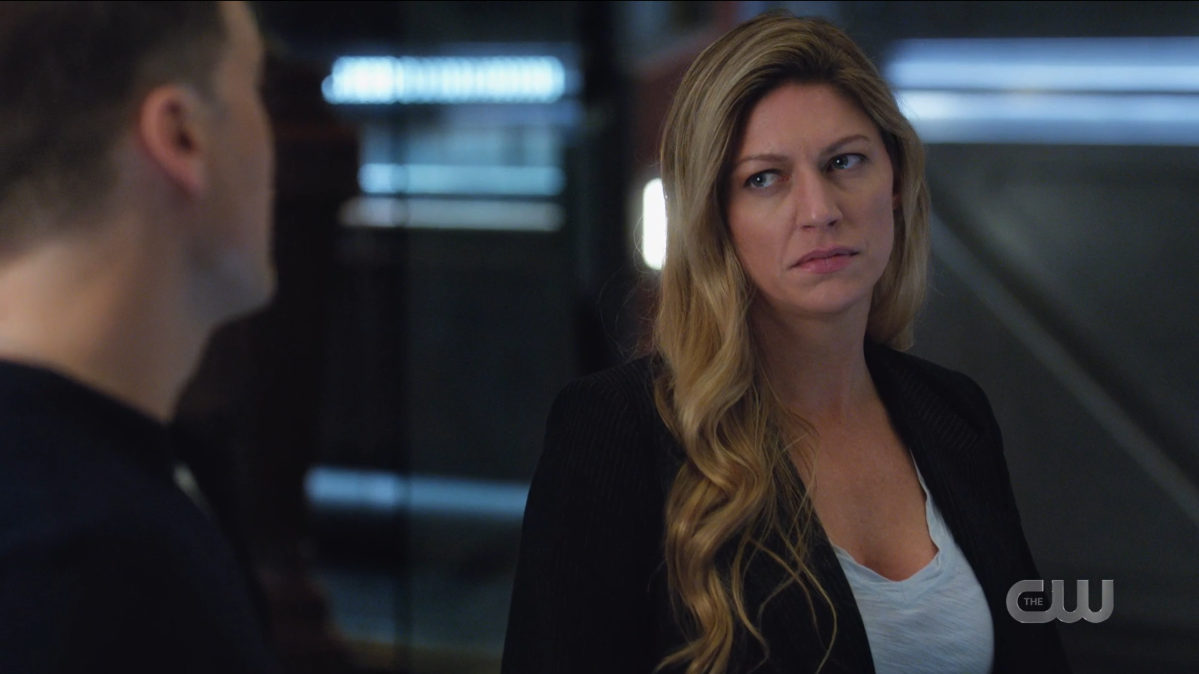 Also me when someone tries to get me to process my feelings before I’m ready. (Spoiler alert: I’m never ready.)

He specifically mentions the proposal, but Ava says there will be plenty of time for feeling her feelings when they get Sara back. Until then, she has to stay focused. 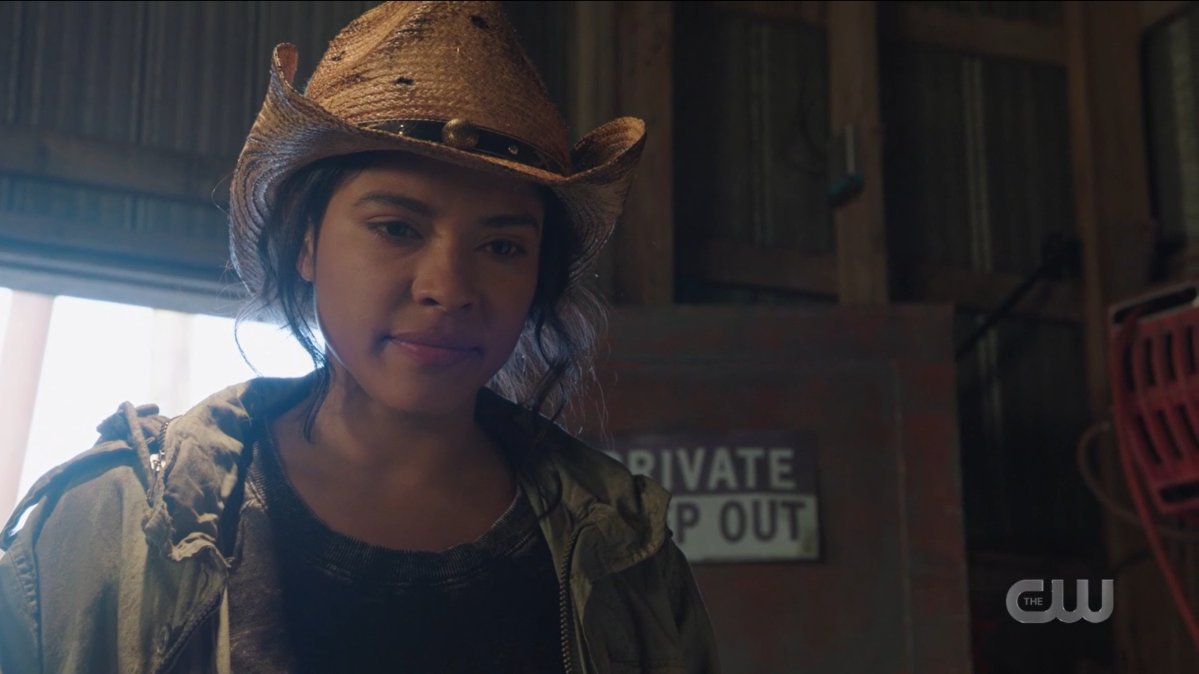 Esperanza straps them to tables and Ava can hear it happening through the comms, and her stress levels rise and more and more Legends go missing, and she blames Nate for making her lose focus by having to justify using the Lena Luthor method of compartmentalizing.

Though her little boxes are threatening to collapse under the weight of this day when Zari, Astra, and Constantine bring her the news that Gary is an alien, complete with proof by way of his spare glasses. 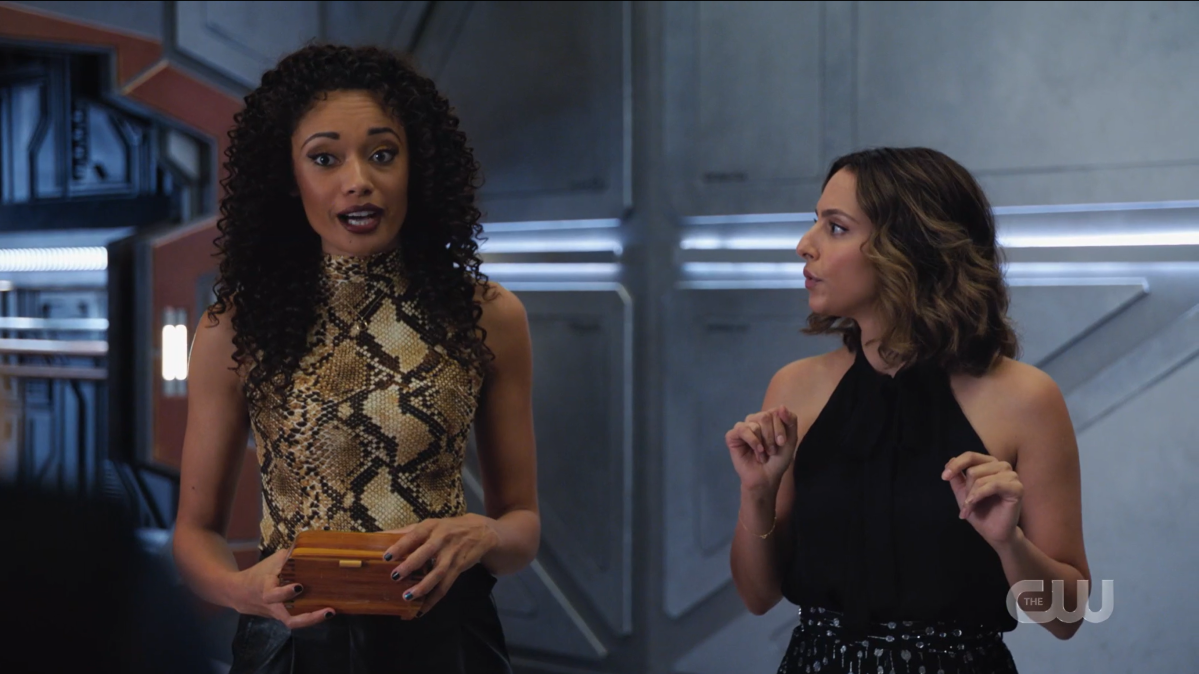 The fact that I’m already shipping these two even though my Zarlie heart is still not fully recovered is proof I am truly slash trash.

And it’s almost too much information for one woman to take.

On the alien ship, Gary admits that he did in fact abduct Sara. He says he was sent to find the “quintessential human” but then fell in love with the Legends. I have to imagine Sara Lance wasn’t his original target though, that he went down to find someone else like John Diggle or something, and just got caught up with the Legends, because I’m not even sure Sara Lance can be considered 100% human anymore considering how many times she’s died and been brought back to life, not to mention the fact that she’s the wielder of the Totem of Death and she’s also the Paragon of Destiny. Even if she IS human, she is certainly nowhere near the most typical, and with her history as an assassin, she also is nowhere near the ideal human either. So either Gary really misunderstood the assignment, or Sara wasn’t his original target. But he did kidnap her today, because his boss told him to, but he also is the reason she was able to get herself out of that pod. Sara frankly doesn’t care all that much about why she’s here, all she knows is that she wants to get back; she knows how Ava worries. 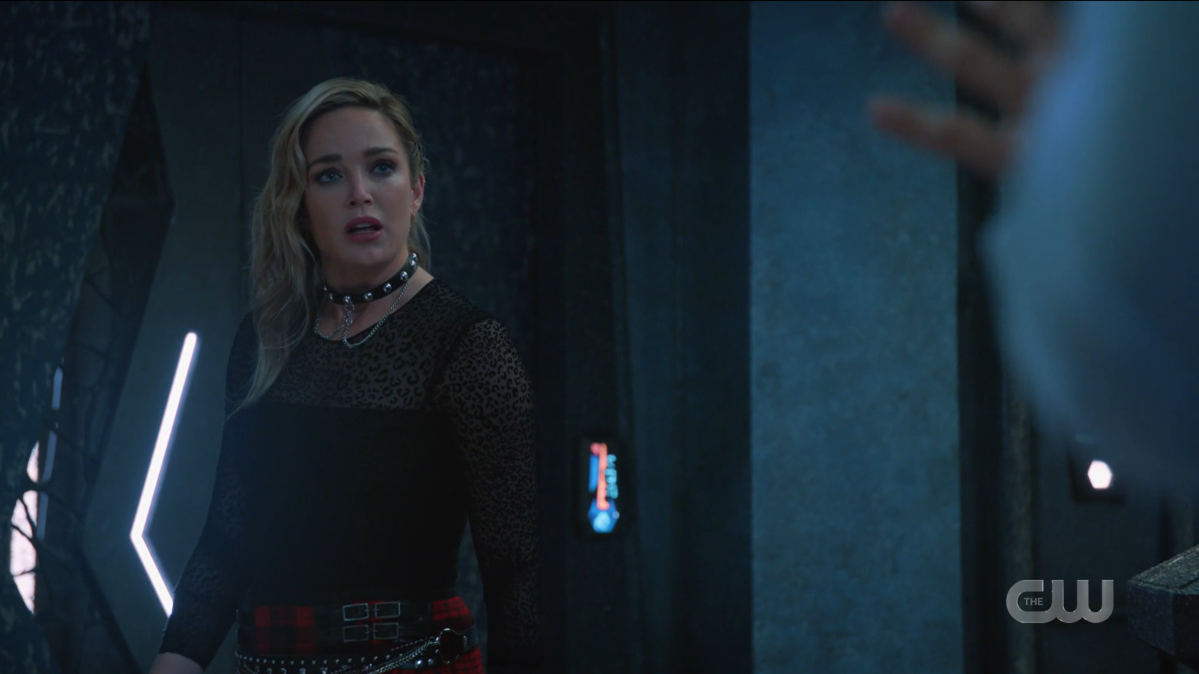 I do appreciate that neither Ava nor Sara really care who these aliens are or what they want as much as they care about getting back to each other.

Gary hadn’t even thought about how this would affect his former idol and boss and is horrified by the thought of causing her pain, and offers his life up to Sara right there on the spot. Sara doesn’t want his life though, she just wants to go home. She asks him to tell her about the ship, and he starts telling the story of Avalance, which honestly is relatable, because I can’t tell you how many times someone at work will say something fairly mundane, and I assume it’s a pop culture reference, and say as much, and am wrong.

Behrad and Mick learn that Esperanza actually goes by Spooner, and she is indeed a wee bit…well, paranoid isn’t quite the right word, but she’s definitely been alone for too long. She finds the comm in Behrad’s ear and digs it out, and as she tunes it to her radio, she hears Ava saying they’re bringing the ship to their location, and Spooner thinks the aliens are returning for her. 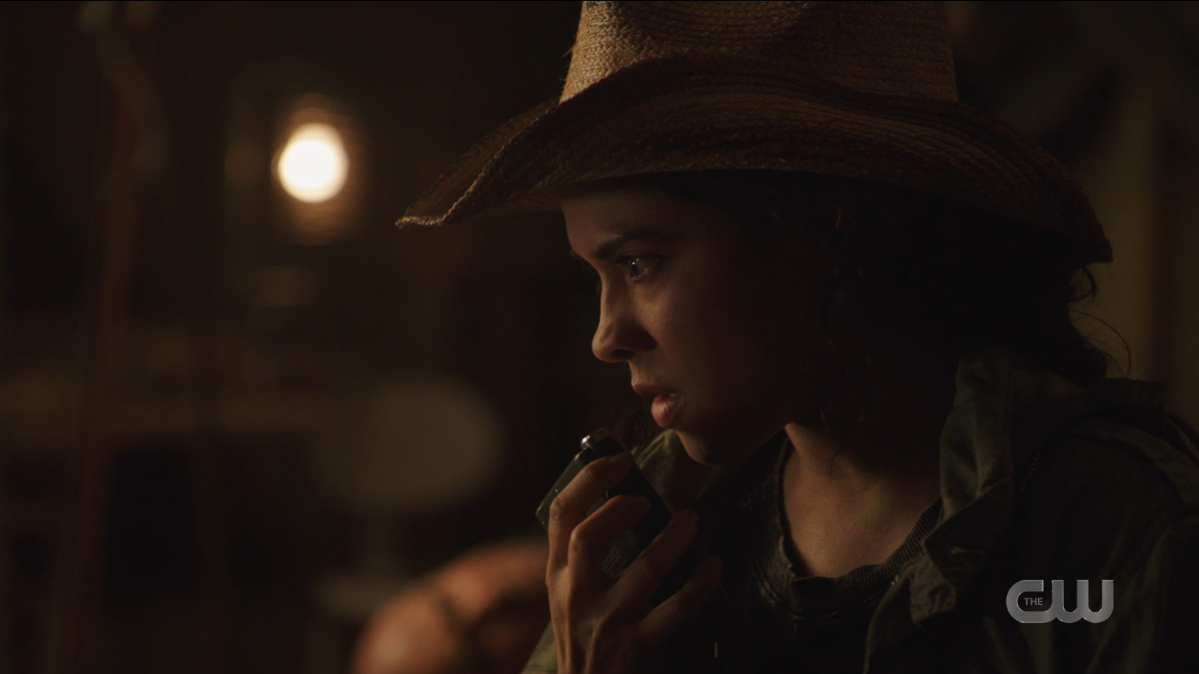 I would watch the movie this shot would be the poster for.

The Waverider starts to land near Spooner’s house but she runs out with a laser gun and tries to beam them down Scottie. Desperate, Ava uses her teleport watch to go down on the ground and stand face to face with Spooner, promising she’s not an alien, and trying to explain the situation. She finally lets out all the feelings she’s been bottling up, and begs this strange woman holding a laser gun to her to help them find the aliens who abducted the woman she loves so she can accept the interrupted proposal. 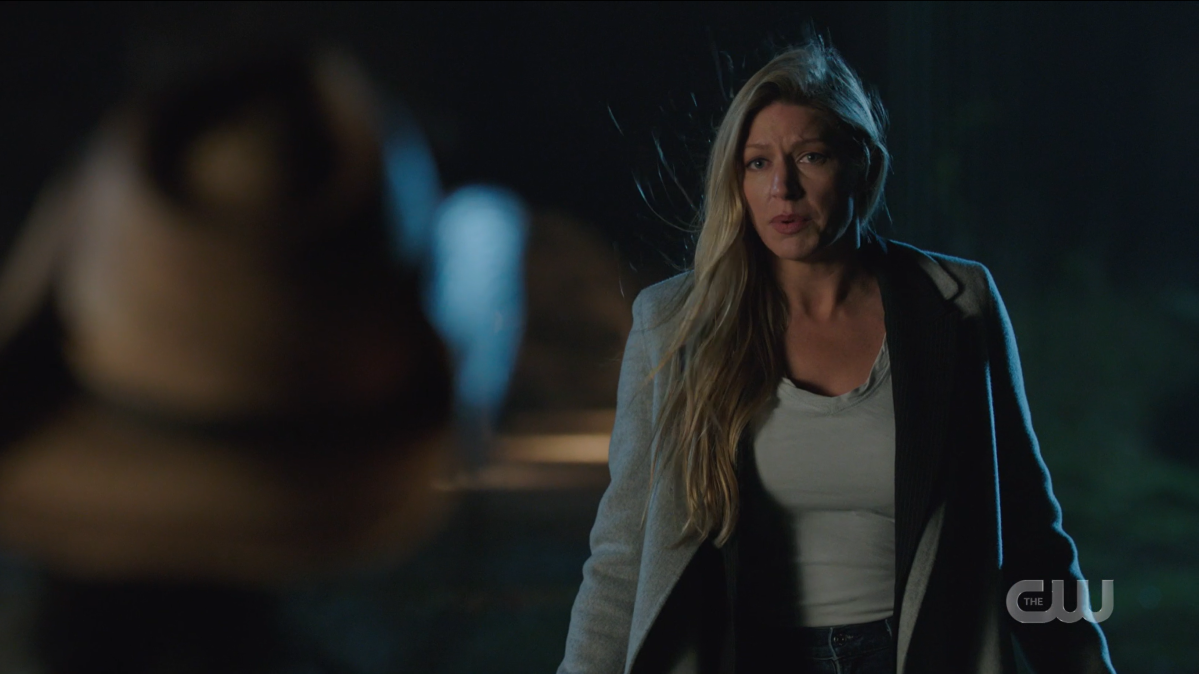 I can’t tell if Spooner thinking Ava was trying to manipulate her with her big gay love story is proof she’s queer too or if I just assume everyone on this show is queer until stated otherwise.

Unfortunately, Spooner wasn’t as moved by this show of emotion and is about to shoot Ava anyway, but Behrad and Mick got out of their restraints just in time and return the favor of tranquility.

On Gary’s alien spacecraft, Sara changes from her punk costume (boo) into a jumpsuit (yay!) and tells Gary the plans to commandeer the ship, open a wormhole, and go home. Step one is to get Kayla the Alien Captain out of their hair, which Sara plans to do with the same distraction technique she used to capture Gary. But Kayla is smarter than everyone else Sara has encountered on this ship so instead of being able to trap her, Sara has to fight her.

Gary tries to open the wormhole while Sara fights, but Sara ends up the one trapped in a pod, and this one wasn’t jailbroken by Gary to let her open it from the inside, so instead she just has to stand there as the cold slowly seeps into her bones.

When Spooner wakes up on what seems an awful lot like an alien spaceship, she’s ready to punch her way out if she has to. It’s actually pretty adorable. Have I mentioned I already love her? 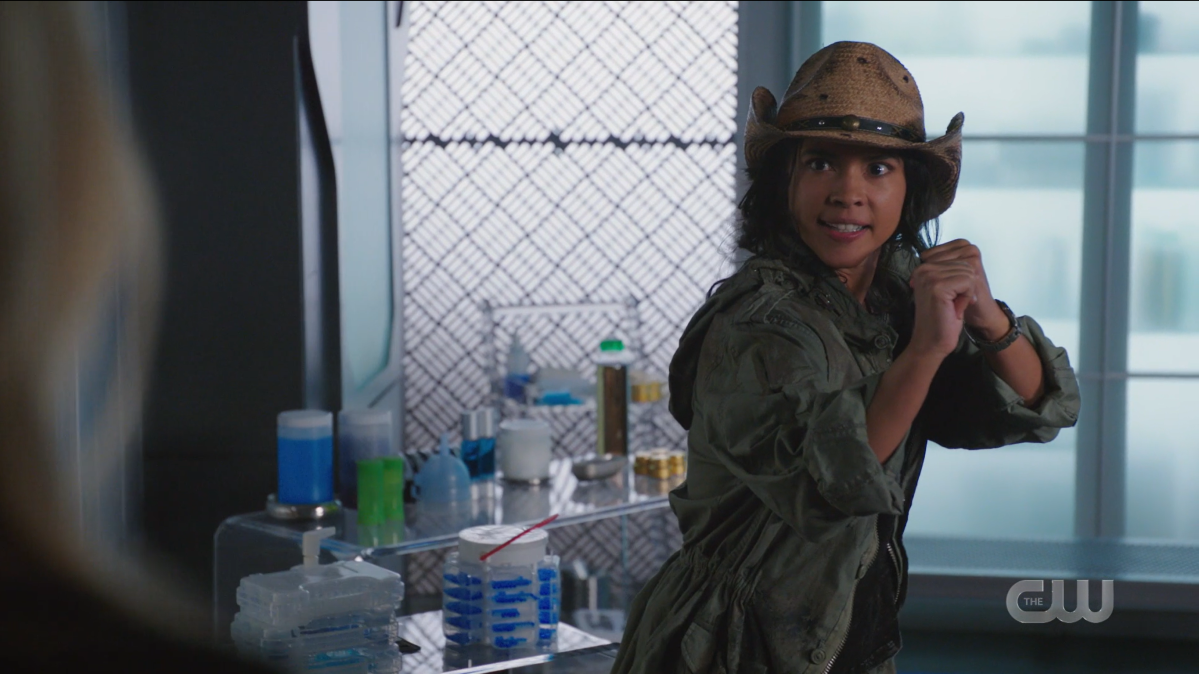 Ava promises to help her take out whatever alien tracker is in her head if Spooner will just use it one last time to help them find Sara. So they give Spooner a green smoothie with a shot of Gary Chrysalis in it, which she downs like a champ, and tosses Ava her tinfoil-lined cowgirl hat.

Constantine does some magic and links Spooner up with Gary, and she can tell that he’s trying to help Sara. 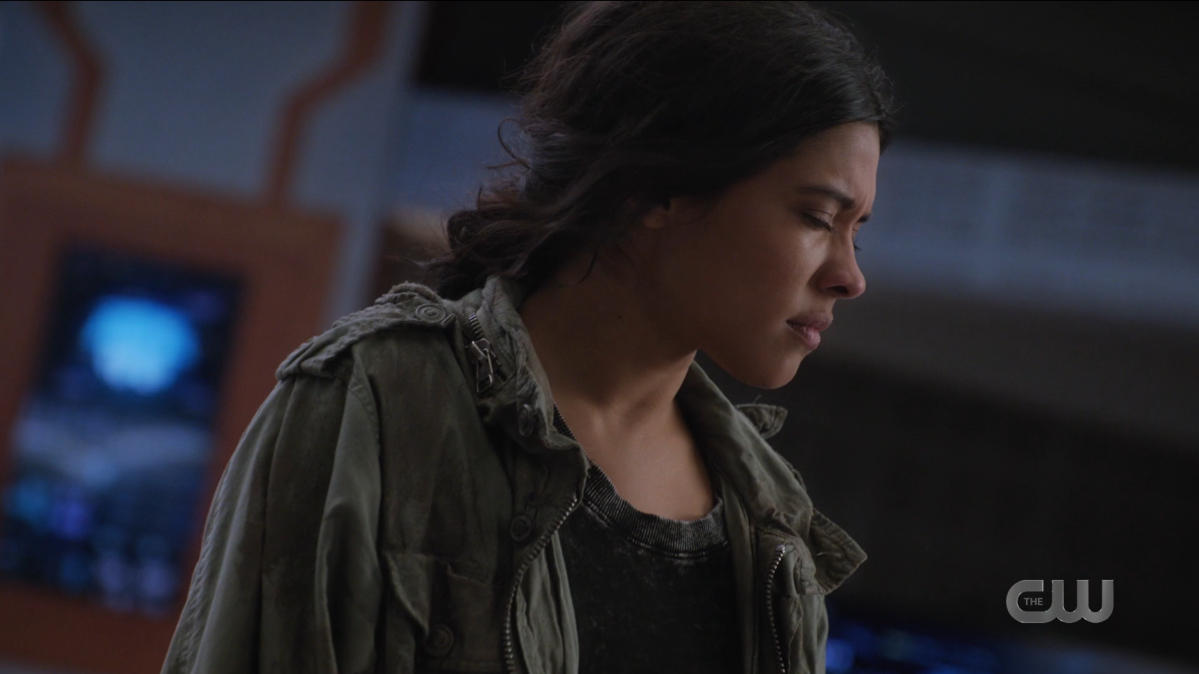 She’s been here for five minutes and she’s already been more useful than Nate was all last season.

Constantine realizes he can’t concentrate on holding this spell and also astral project onto the ship, so Ava decides to do it instead. She steps in the middle of the sigil and finds her consciousness in the cryo-pod with Sara, who is on the brink of consciousness.

Ava calls to Sara and says that she better survive, because as soon as she gets back, she’s going to say yes to Sara’s proposal. She tells Sara she loves her and hopes it’s enough as her mind is returned to her body. 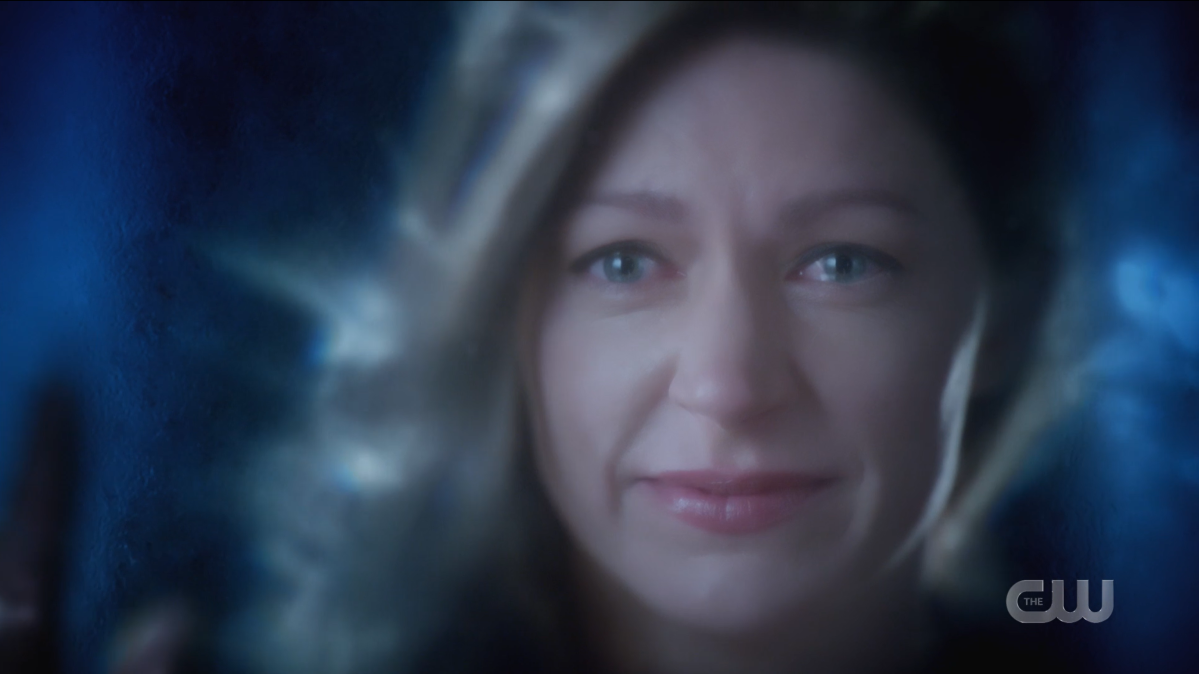 “I know forever don’t exist, but after this life, I’ll find you in the next. So when I say ‘forever’ it’s the goddamn truth. I’ll keep finding you.”

Sara, both inspired by the will to fight for her girl and also reminded of the engagement ring in her pocket, uses the diamond to cut her way out of the pod just in time.

Sara fights Kayla again and this time ends up knocking Kayla and some occupied cryo-pods into the timestream, which surely will be fine, but regardless of what comes of that, for now, Sara survives. 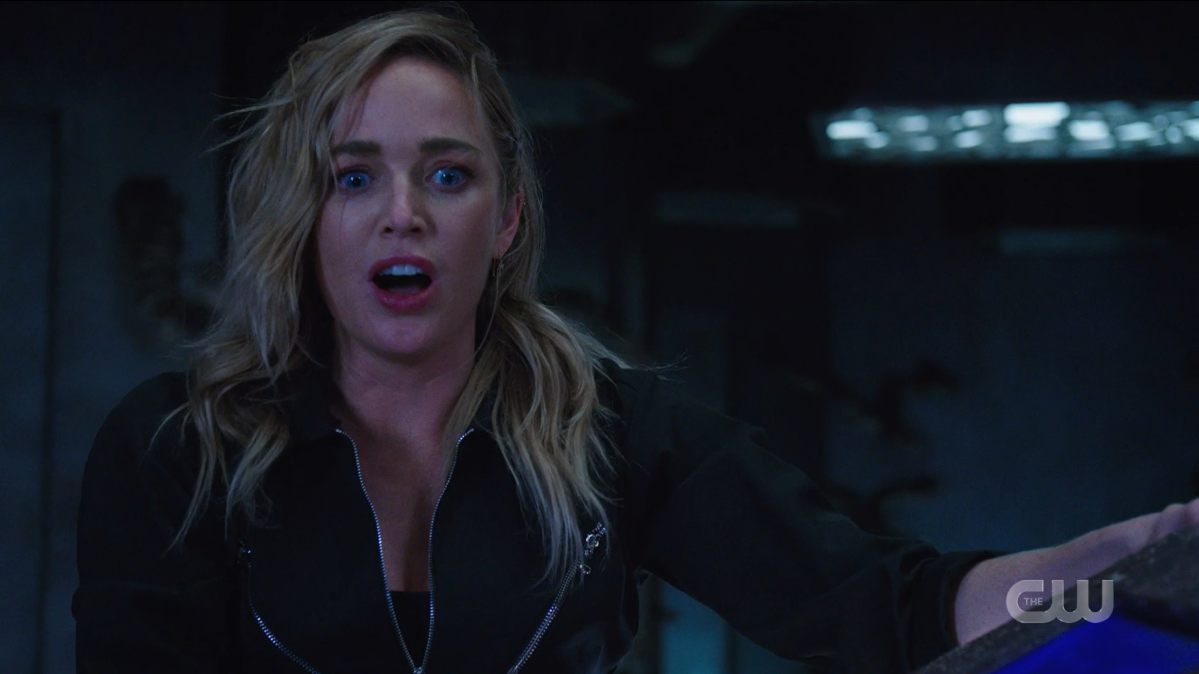 Back at the mansion, Constantine wakes up from a magic hangover nap to see Zari delivering him a recovery smoothie, now with 100% less alien goo. After she leaves, Astra comes in to tease her new roommate about being whipped by Zari. She also wants to thank him for giving her the chance to have a hand at being a regular gal for a while. She doesn’t want to keep getting roped into Legends’ hijinks, not yet. She wants to learn to love the world enough to want to save as much as they do. 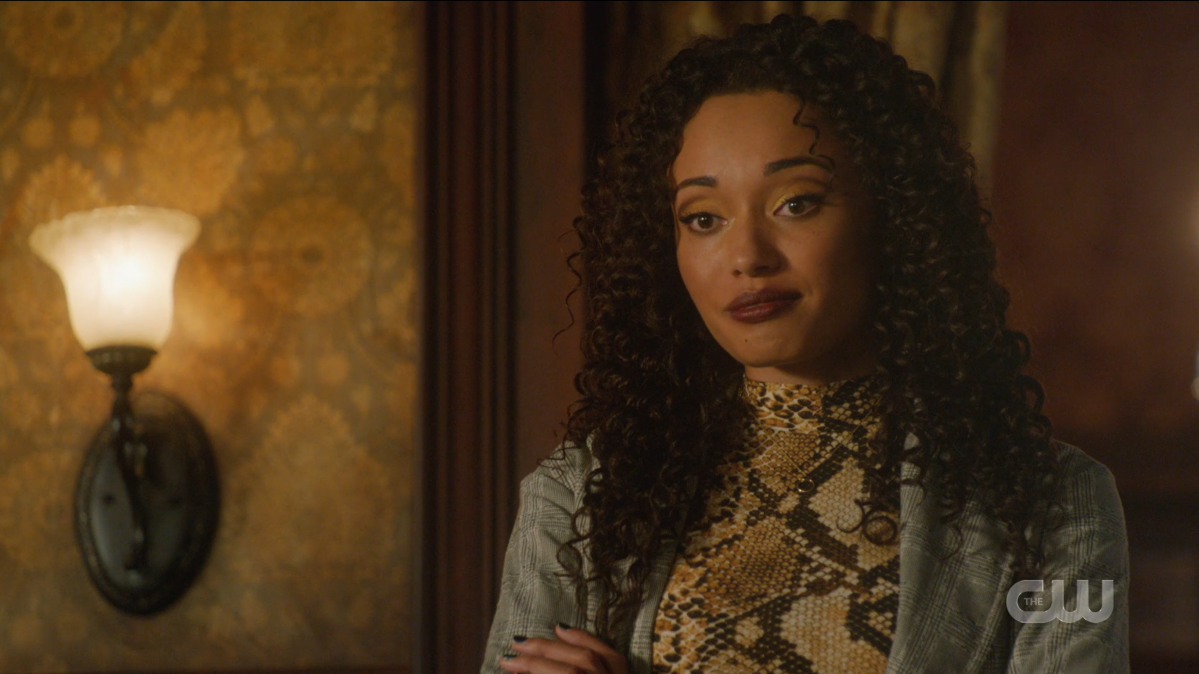 It’s cute how she thinks she doesn’t already care about the Legends to want to save them when she has already yelled at Constantine for not trying hard enough to save Sara.

Up on the ship, Behrad asks Spooner if she wants to stick around, but she just wants to get her chip removed and get back to living her life. However, when Gideon scans her, she doesn’t find any chips. Before anyone can take Gideon up on her (a wee bit too enthusiastic) offer to dissect Spooner’s brain, Spooner hears the aliens entering the timestream. They look outside and see that she’s right, and Ava can’t help but smile. She recognizes this mess because she’s seen it on the floor of her bedroom; this is her girl’s doing. Sara is alive. 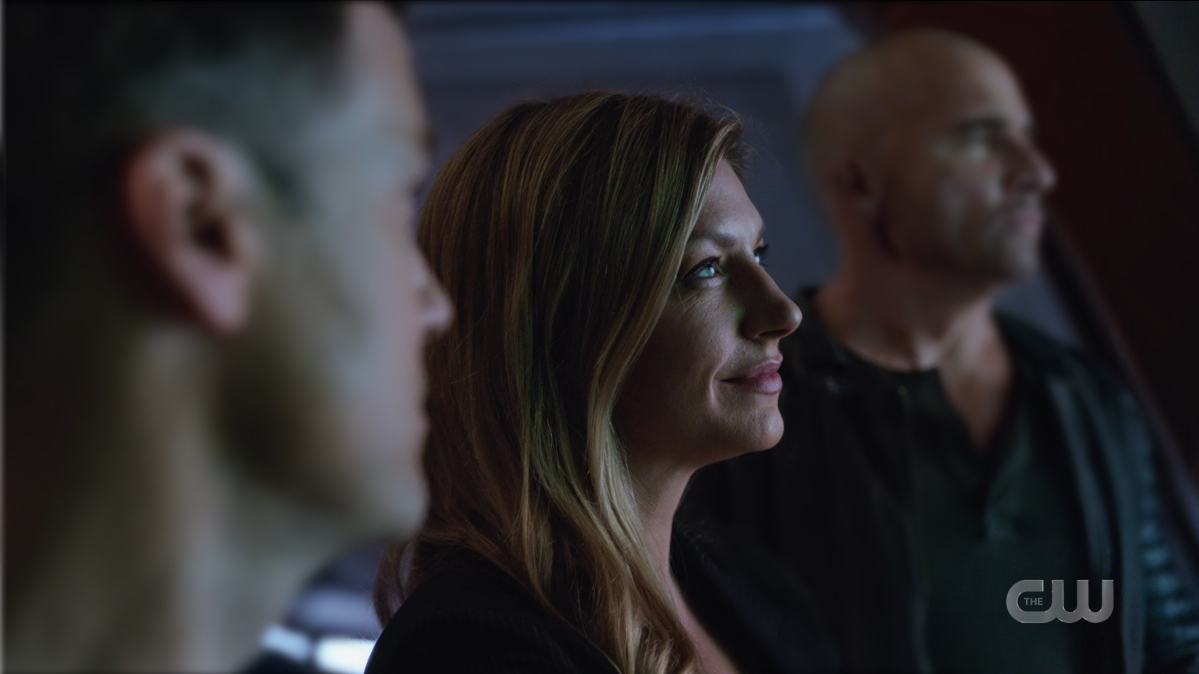 And it’s true, Sara is alive and back to yelling at Gary (who was engaged to Kayla, apparently) about the wormhole. They zip toward it as fast as they can, but it closes before they can get through. So, not unlike Kara in the Phantom Zone, it seems like yet another petite blonde protagonist is stranded in space away from her team.

Next week: Doublemeat Palace. See you then!

Submit to our Community Calendar →
View More Meet-Ups & Events →
We Can Do This!
75% of fundraiser gifts are $50 or less. If everyone who can pitches in, we’ll meet our goal! Can you help?

Indie queer media can’t survive without your help. Will you pitch in and help us write our next chapter? Every dollar counts!