When I moved to Chicago in 2009, I was kind of a mess. I was technically only going there for a month. That’s what I told my very tight-knit housemate group in Portland, OR, who included my girlfriend of two years and two of my close friends — all of whom had been my people in college. We spent all of our time together in the most Portland of ways: being in bad bands together, planting giant raised beds, tending to the compost pile, brewing beer, watching Xena Warrior Princess stoned, getting wasted at the Florida Room, doing weird gigs off of Craigslist. “It’s just a month, so I can plan the next phase of my life,” I told them. 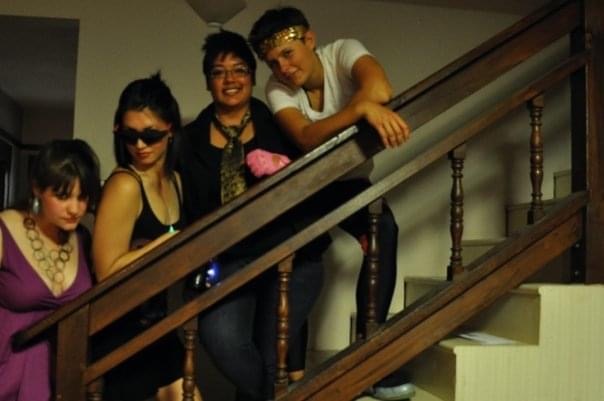 Me, second from the top, with my housemates before we all went out to a party.

My other good friend from college had just moved back to the U.S. from China and we thought it would be smart to apply to creative writing MFA programs together. It felt like an undertaking that required both of our brains. This was our dream — and we both knew how precarious it was to have dreams of becoming real poets and fiction writers, respectively — so we wanted to do it right. But my then-girlfriend was and remains a very intuitive woman, and we cried in the shower together before I left, because she had a feeling, even if I didn’t know yet, that I wasn’t going away for just a month. And she was absolutely right. I felt so free to be whomever I wanted in Chicago, to ride my bike all over town, to make friends for a night, to spend all of my time however I pleased. I did not go back to Portland. 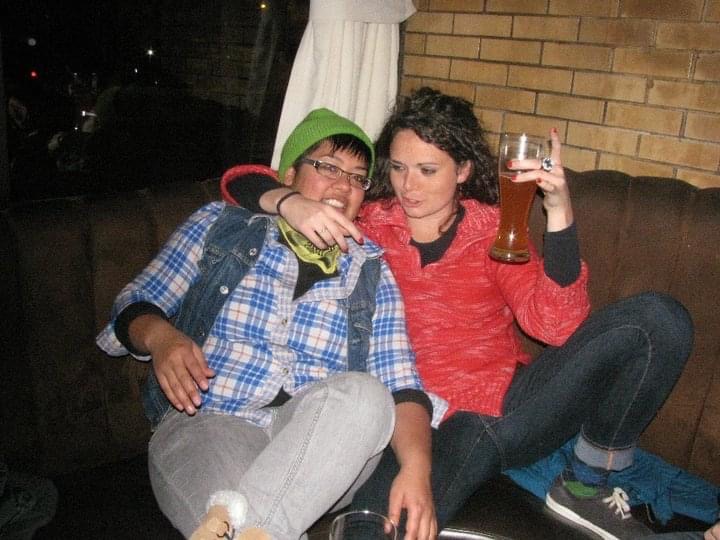 Me and my friend Amy, feeling free to drink beer in the Uptown Lounge all night.

Ultimately, Zigzags was fueled by the nostalgia for all the places I’ve loved and left and missed. There’s a lot of flirting and parties and witty banter, but it’s very much about the necessary and heartbreaking recognition of when it’s time to move on. That’s what I was hoping to capture in this video trailer, below, that was produced  for me by Phoebe Unter. In Chicago, I made another tight-knit family of friends, with whom I did everything in the most Chicago of ways. I didn’t want to lose them when I went to grad school, so I went back for several summers, and this book is a fictionalized account of those summers, all combined into one! In the excerpt, below, my main character and doppelgänger, Aneesha, is living with her old flame and close friend, Whitney — only now Whitney has new boyfriend living with her, so they’re trying to figure out their new dynamic.

If you’re interested, you can buy my book here and join me at my reading with Skylight Books on Thursday, Oct 22 at 6:30pm PST or you can join me at another event — that one will be on Thursday Oct 29th at 6pm PST with Amanda-Faye Jimenez aka lesbian meme-stress @failureprincess and more info will be available here.

The Video Trailer For Zigzags

At home, Whitney was on the couch with her iPad. “There you are,” she said, without looking up.

“What’re you looking at?” I threw my backpack on the floor and settled in next to her.

“I was thinking that I want a new necklace, but it can’t be too girly. What do you think of this one?” She slid her finger across the screen and pulled up a photo of a yellow rhinoceros pendant. “Business casual or play clothes?”

“Well, normally, I would say play clothes, but since it’s detailed in gold and on sale at J.Crew, I’d give you business casual if you were wearing a dress.”

“What about a suit? With a nice blouse? What about a skirt suit?” Whitney sounded desperate, and I laughed. “This is serious,” she warned me. “I need to know.”

Both of our styles were heavily reliant on our causal “play” outfits, with a touch of preppy to convey elegance. The two of us trying to dress for work was always a shot in the dark.

“If you like it, get it. I think you can make it business casual. I mean, we are talking about a rhinoceros necklace. Like you’re in kindergarten. But we’ve worked with bigger challenges.”

Whitney placed the iPad between us so I could see better. “Why is it so hard to find gender appropriate fashions? Why haven’t people figured this out already?”

“I know,” I said. “Everyone’s so concerned about gay marriage, but what I really want is gay shopping opportunities.”

“Like these suits!” Whitney tabbed over to a slideshow. “Tapered legs, textured fabrics. Why can’t they do this for women? Why is Rachel Maddow the only one who gets to have one? I can’t afford a Jil Sander suit!”

I shook my head. “I know what you mean. And then dykes get a bad fashion rep, which is totally unfair because unless you’re that skinny dyke who looks awesome in men’s clothing you have to be creative.”

“And not everyone wants to look like Shane,” Whitney added, and flipped back to her shopping tabs.

Logan popped his head out from the bedroom, and I realized he was home too. “I would just like to add to this conversation that I don’t miss shopping in the women’s section at all. It’s always made better for men. Menswear is classic and women’s is trendy.”

“Screw the patriarchy,” Whitney grumbled. “I’m getting my necklace.”

“Hey. Shut up.” She added the rhino to her cart and continued shopping. “What’d you do today?”

“Well, I saw Tutor Crush at Metropolis this morning. She lives in the neighborhood now.”

I met Tutor Crush, appropriately, at a tutoring center, where we had both gone on Wednesday afternoons to offer free homework help and general entertainment to kids. I was a big hit with a group of third grade girls who enjoyed asking me questions about my boyfriend-free life and offering me advice on hair styling. Tutor Crush joined us for a game of Outburst one afternoon, and she and I became pals after an unexpectedly good 30-second round, in which she and I named every John Grisham book on the list. Whitney was less than enthused by Tutor Crush, which was confusing because she usually supported irrational crushes on girls too straight, too taken, too cool, or too young.

“And Tutor Crush is no longer with her boyfriend.” I wiggled my eyebrow up and down.

Logan popped his head out of the bedroom again. “Are you seriously trying to sleep with someone you used to tutor?” he asked me.

“Logan, can you either sit in here and join the conversation or just leave it alone?” Whitney shot back.
I dug in my backpack for my water bottle. I didn’t know where this was going.

Logan seemed more surprised than offended. “Really? That’s how you’re choosing to talk to me?”
Whitney retreated to her iPad. “Sorry, it’s just annoying and Aneesha can try to sleep with whoever she wants.”

“What?” I turned toward the bedroom. “No, let me be very clear that I know her from when we used to tutor together. She is the same age as me. A fellow tutor. A peer.”

“But you did have a crush on that high school girl,” Whitney muttered. “The one who was smart with a bad attitude.”

Logan made a point to come into the hallway to say, “You two are sick,” and then went away again.

“I did not! She was half Black, half Japanese, and we bonded on mixed and the half Japanese front,” I whisper yelled. “I only said that we had a good time taking her health survey together. Whit, we said we wouldn’t talk about this with other people. Because it sounds pervy, like we mean it. Other people don’t get that it’s a joke.”

“Good, whisper about me in the living room, that’s respectful,” Logan called.

“We’re talking about Aneesha’s underage crushes, not you,” Whitney responded.

I hit her on the shoulder and she stopped. “Okay, okay, so you’re gonna get with Tutor Crush. Finally. This has gone on way too long. Severine’s not going to care?”

Whitney delivered this like an insult, but now that she mentioned it, I wasn’t sure what Severine would think.
I had put Severine out of my head since arriving in Chicago. She was a girl I met in a fiction class that spring, and had fallen halfway in love with. Her voice was a low thrum, her tongue was sure and strong in my ear, and her dark hair looked elegant when it was a mess, which said a lot about the way she functioned. She smoked like an industrial-era oceanliner, and I could always dig up a half-full bottle of vodka in the nest of clothing in the backseat of her car. Unfortunately, Severine also embodied all of the irrational crush qualities, the most pressing being the fact that she seemed to consider herself straight. I was confused by this lack of openness from a girl who had given me a copy of Nabokov’s Pale Fire, but maybe it was her way of warning me about the complex emotional landscape I had entered into.

“She’s not even talking to me,” I told Whitney. “I think she takes my being here as a personal affront, like I came to Chicago in order to fuck with her. I’ve tried all modes of communication and nothing. I assume she wants nothing to do with me.” I was a little heartbroken over the matter, but everyone including me had known it was headed for a rocky decline.

Whitney put her iPad on the coffee table, and we stared at the wall for a moment. “Please don’t look like that, it makes me depressed. It can’t be that serious.”

“Are you gonna?” I whispered and nodded towards her bedroom. “What’s up with that?” He had only been home for a few days, and already I doubted my original notion that Logan had a secret magic I could learn.

“I don’t know.” Whitney rolled her eyes. “Yeah, you’re right.” She paused. “My relationship,” she sang and slapped my thigh as she got up. I watched her familiar jaunty walk around the coffee table, the triangular motion of her hips.

“What?” she asked, her eyes meeting mine.

“What?” she persisted, bending over to look into my face.

“Go talk it out,” I said quietly. “Apparently you do that now.”

Whitney smiled and shook her head. “Not fair.”

I smiled and put my bag on. It was time for me to give them some space. “Probably not.”

“We’re going to Chances Dances this weekend. Come with us,” she said, leaning through the hallway.

“We said we’d go dancing. Summer bears,” she reminded me.

I nodded and shut the door gently behind me.