Juniper Moon Folk Arts, based out of Kentucky, is an etsy shop created by rural lesbians Raina Rue and Vann Gibson — Rue is the artist and Gibson is the shop manager. The shop is representative of “things that I like and things I wanted to see,” says Rue, whose work is largely shrinky dinks of cartoons and illustrations that are made into earrings, pins, and bolo ties. “It’s a very simple style because a simple style translates better to shrinky dinks; if you put a bunch of detail in your work, they just disappear.”

Lots of Rue’s inspiration for Juniper Moon Folk Arts are country markers — soup beans, morels, and possums — combined with Pride pins and sex toys. Possums have become a flag for rural queers, “It feels both very gradual and very sudden. I think it started in weird leftist Facebook meme groups, kind of, and somehow we all had love for this weird, little, scrappy critter, and it just blew up from there. I don’t know where it originated exactly, but it’s probably within six degrees of someone I know [laughs.]” You heard it here, folks, possums are gay. 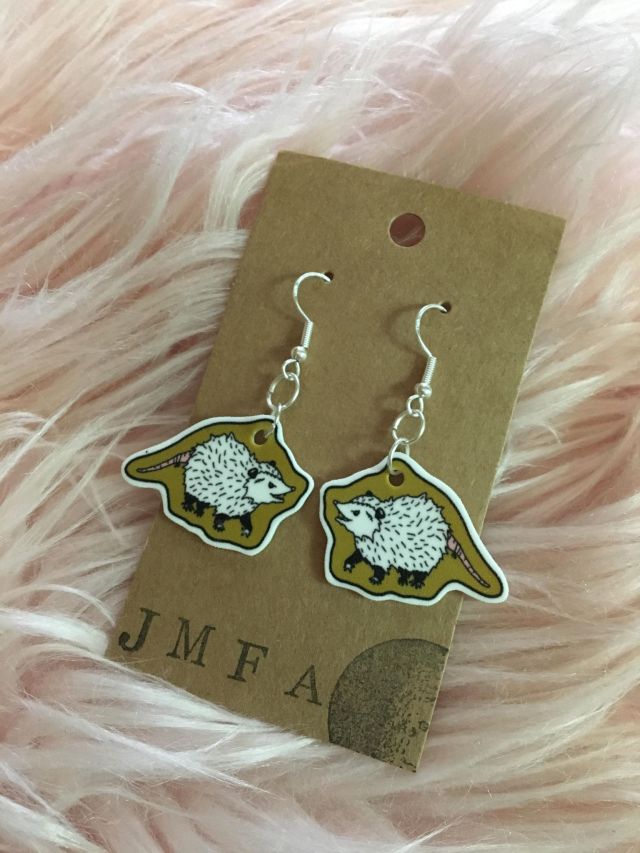 Rue was “super artsy” growing up, but didn’t have a specific area of focus, “I fiddled around with a lot of different things. And I never thought I was gonna have anything with art that I could make a kind-of living from.”

The etsy shop started under a different name selling needle felted items, but the shrinky dinks caught on because of famed drag queen Sasha Velour. Rue made some fan art pins for Velour in 2016, who loved them. “When Sasha Velour gagged and died for the shrinky dink pins, I decided to put my name on a pin because my name is weird and I could never buy anything with my name on it.” For the unfamiliar, a huge part of gas station and museum merchandise is stuff with your name on it, from magnets to necklaces to miniature statues of liberty — I own like 40. “I knew it would be a big deal right away,” Gibson says. “And it’s a big thing now that we’re able to highlight other Appalachian artists and raise funds for organizations like Holler Health Justice and Kentucky Health Justice Network.”

Gibson and Rue have collaborated with Sexy Sex Ed, Chris DeMaria, Travelin’ Appalachian Review, and now Louisville Community Bail Fund. During Pride month, Juniper Moon Folk Art is doing weekly giveaways to raise funds for black-led organizations and bail funds working in antiracism and prison abolition. “I think it’s really baked into our identity now, and we reflect the queer community the way we’d like to see it represented but we want to bring into the fold other perspectives, identities, and voices, and be a hub as much as we can.”

Just a couple days left before we pick a winner for the #CraftyQueers prize pack!! Purchase raffle entries for $2 each via Venmo @junipermoonky or cashapp $CastIronQueer—all proceeds go to Black led organizations, medical and bail funds for protesters, and individuals in need of rest during this revolutionary time. You can also get FREE entries by tagging your artsy fartsy photos with #CraftyQueers and #JMFA4BLM ❤️🧡💛💚💙💜🖤

Rue grew up in a small rural town, didn’t know she was gay when she was young, and came from a religious background. “In the religious family I grew up in, [being gay] wasn’t even an option, so my brain never consciously wandered that way. Now I look back and I’m like ‘that thing I did was gay.’” As someone who wrote a girl a love poem every day of her sophomore year of highschool, and then didn’t get I was queer until 23, I understand this particular experience. ”I didn’t grow up with a lot of queer representation, there were a couple dykes on the outskirts of town, but they got called names and weren’t really accepted. Since I came out, and over the past ten years, I realized there is so little popular representation of people who grew up in Appalachia or the south who are also totally gay and fabulous. Or even gay and not fabulous.” Digging out of your culture can be really complicated when you’re queer, “I can remember thinking or saying hurtful things about queer people when I was younger because of how I’d been taught, and now I want to rail against that with every bone in my body.”

Gibson grew up in Dayton, Ohio, and moved to Kentucky at age 19 to be with Rue. Like a lot of lesbians, their relationship started as a really intense friendship and they’ve been together 8 years, enduring a lot of poverty and homelessness in that time. “For me, living rural and being queer has been how we met some of our best friends,” Gibson says. Their queer community provided them housing when they needed it, transportation, and “we’re probably all going to end up all on a plot of land together feeding each other oatmeal when we don’t have teeth. They’re who watch drag race with, take trips to Louisville with, and plant soup beans and make cornbread with” Rue says. 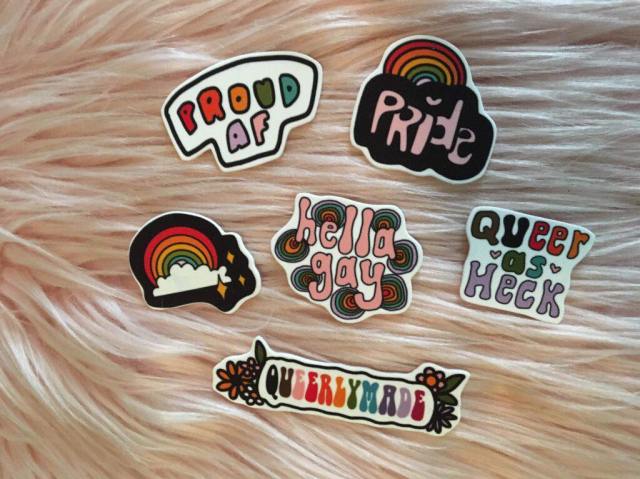 Community helped Gibson feel connected to the area and connected to the land, whereas Rue has always wanted to be a mountain witch. “Our favorite thing about living rural is pissing outside, and fashion shows in the woods, it’s a great point of liberation for me, being outside and feeling my oats out in the woods.” Gibson says don’t discount the gas station food, “There’s something about the deep fried mac and cheese bites, deep fried cauliflower, and coleslaw. I’ve had some of the best chicken strips ever there.” Rue clarifies, “we lived on gas station food for a while when we didn’t have a car.”

Chosen family is a major thing for Rue and Gibson who like their privacy and have a community that’s very spread out. “Our community in my hometown was very much not there. We had two friends in town, and I went to high school there, but a lot of people I knew had kids, I found out I was gay, and I broke apart from people that I had grown up with. Then Vann and I went through terrible bouts of depression and we were broke as hell and super isolated.” Since then, they’ve moved to another rural community where they’re still physically isolated, but their community has gone virtual, “Community over the past few years has been online. We’ve made friends with queer artists and activists and they’ve all been supportive of what I do and I try to be supportive of what they do. Even though were aren’t from the same holler, we’re going to do what we can to support each other.” 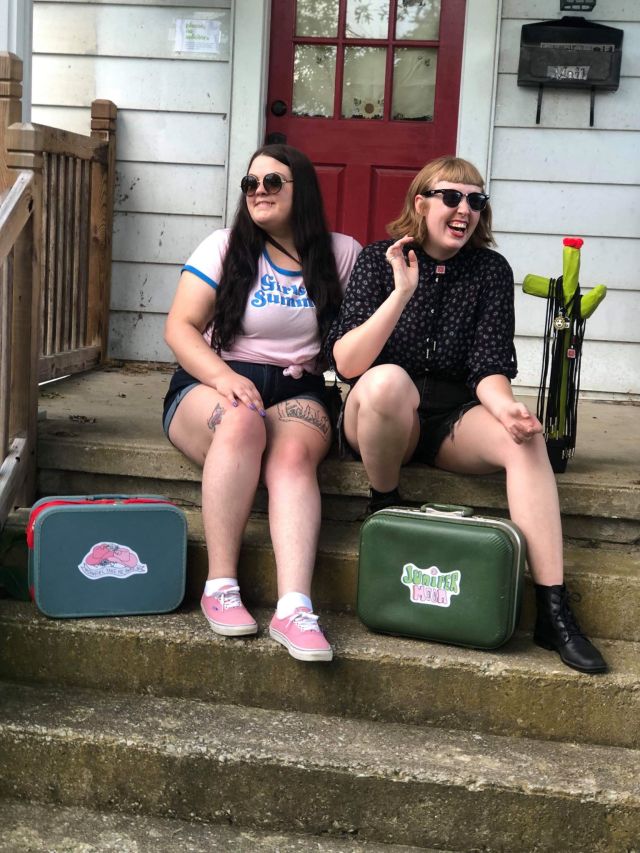 “I didn’t think that was something that could be sustainable, and we have events where we see each other every year and then a bunch of online, and it’s enough. It’s more than I thought it would be, and we’ll all just pass around the same 20 dollars until we die,” laughs Gibson.

Both Gibson and Rue like rural living, and love the family they’ve chosen. “I need to walk out onto my porch and not hear anything but a rooster,” Rue says, “I’m a hermit. And being gay shouldn’t change that.”