Jane Lynch hosted SNL this weekend where she sang a new Glee theme song, seduced Andy Samberg and played Suze Orman’s former “roommate.” The Lynch fit right in with the SNL crew, confident as ever – with her improv skills to fall back on.

As Suze’s former roommate on The Suze Orman Show: 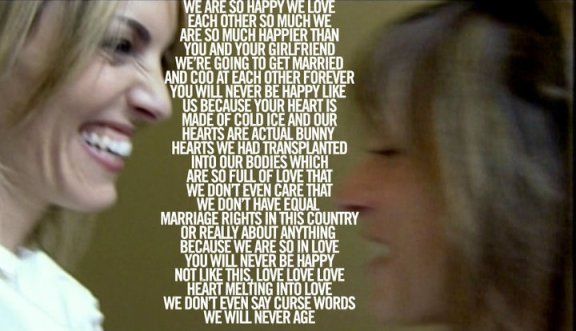 The deets: It was a private Jewish ceremony in Malibu attended by most of the RLW cast minus Mikey. Jill’s mother and father gave her away and Nikki was given away by her mother. The brides wore gowns and dresses by UK designer David Fielden and Winnie Couture, cause they’re fancy like that. Nikki is now a full fledged law firm, taking Jill’s last name: Nikki Weiss-Goldstein. Mazel Tov! (@advocate)

A hot girl with amazing make-up skills transforms herself into Jared Leto. 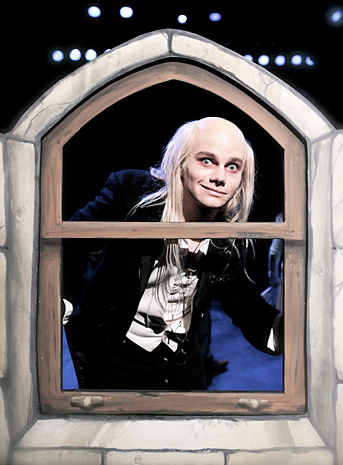 “Riff Raff is the best character, and everyone was amazed at how incredible the makeup was,” says Colfer. “I was mistaken for a blonde woman a couple times. All I kept thinking was, ‘You did this to yourself, Chris.'”

Here’s what we know, casting-wise:

And so it goes. Tammy, Melissa’s former partner and mother of her twins, has blogged again explaining how her financial situation has left her and her children hungry and depressed after the break up earlier this year. Toward the end of the post she comments that chemotherapy changes brain chemistry and people rarely emerge the same after going through it.

“pays all the bills”
not entirely true

today i was shopping for birthday decor
4th next sunday!
little cash for lunch?
nope- not enough funds
no food

someone told me that chemotherapy just messes with a brain chemistry, changes the brain, the person, and makes them just in general different. they might b meaner, or illogical, often imbalanced, or whatever. but they just don’t come out the same. hardly ever, i am told. and they can’t help it. it just is.

and i think about that alot too.