Back in August I received an invitation to the Papal arrival ceremony on the south lawn of the White House. I was the executive director of Integrity USA from 2013 to 2015. I was lucky enough to be invited to the White House last summer to see President Obama sign the executive order banning employment discrimination for gender identity for federal contractors, and it was a great to joy to receive another invitation. I also had the chance to invite five other folks, so I picked five amazing people.

There was Marsha Garber, a devout Roman Catholic mother of a trans man. Since her son’s death she and her husband have done incredible work for the trans community in Massachusetts. Her husband passed last year, and his death was felt throughout the Boston trans wold. I was glad to be able to offer her a ticket and have the chance to get to know her better.

There was Mateo Williamson, a transgender man who manages to both be studying at a Jesuit medical school and be a voice for transgender and gay rights and immigrant rights. He is also a leader in the LGBTQ Roman Catholic organization Dignity USA.

There was the Rev Cameron Partridge, the first Episcopal priest to be ordained post-transition. True story: Cameron was the first other trans person I came out to as trans, lo these many years ago. He has been a great friend and mentor to me ever since. 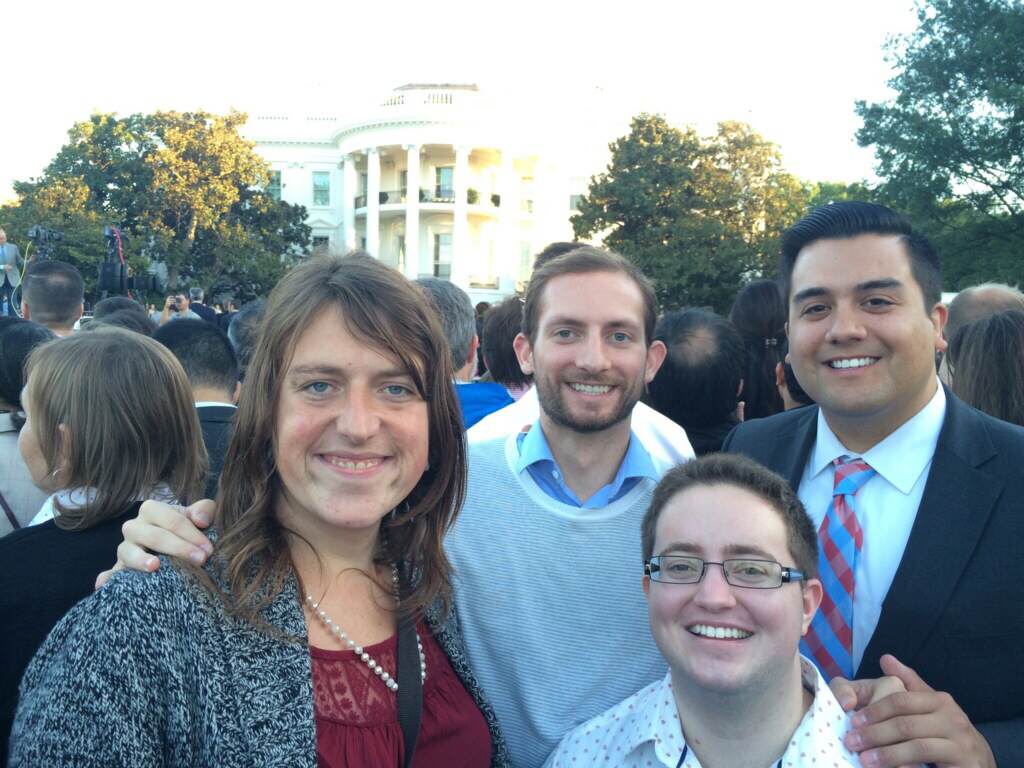 There was the Rev Stephanie Spellers. I first knew Rev Spellers when she was getting a vibrant church community going at the Episcopal Cathedral in downtown Boston. The community was called The Crossing. They meet on Thursday evenings, and to this day I don’t know another religious communtiy with so many trans folks, trans women, trans men, non-brinary folx, and such a great feeling of moral responsibility to the trans community. The Rev Spellers is also the author of the book Radical Welcome: The Other, and the Spirit of Transformation.

It was an adventure. About two weeks ago a man approached Mateo at an event and got him talking about the trip to the White House and this amazing group of devout Christian LGBTA advocates. Turns out that gentleman was a reporter for a pro-life news site. A story went up there, that story was picked up by Breitbart, and Fox News took it from there. Before long a few gay and trans folk among 15,000 guests on the White House lawn was enough to get media talking around the planet.

Last Friday Rush Limbaugh called me a transvestite. A news story on the Fox News website called me a “biological man.” A Roman Catholic lady blogger wrote a piece imagining me shopping at Victoria’s Secret.

Mike Huckabee and Rick Santorum were both mad about us being there. The whole thing was a little surreal.

On the other hand, everyone we had ever met heard the news. My cell phone number found its way out onto the internet and I had a number of people call me and ask me to give Pope Francis messages or ask him for blessings.

I was a chaplain’s assistant in the Army, a sort of two-handed job. On one hand I was the case worker who looked after a unit of 800+ soldiers and was there for them when issues like PTSD or substance abuse or family challenges needed facing. On the other hand, chaplains are noncombatants. Chaplains are absolutely not allowed to touch weapons. My unit’s chaplain was a fierce Southern Baptist minister with an absolute inability to say anything other than exactly what he believed. I was that man’s body guard.

I ferried the chaplain all over southern Iraq to the bases our unit operated out of. He did not believe in homosexuality, said the Bible was against it, didn’t like seeing same sex marriage announcements in the paper.

But Sunday morning I got a call from him. He had seen the news about me and my guests, he said, and if anyone dropped out he was happy to go in their place with me and stand with me at the White House. 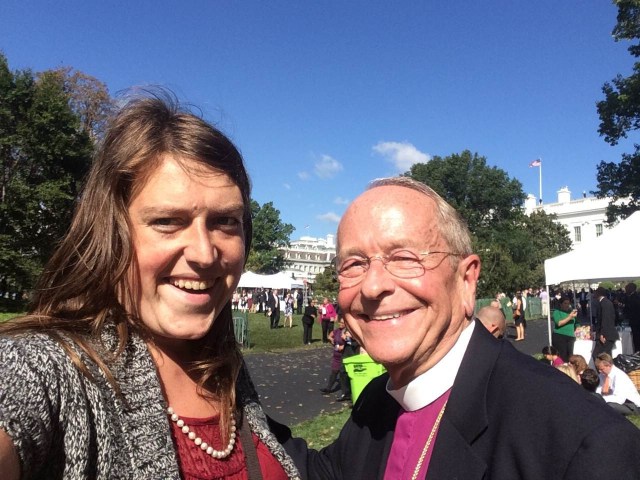 You’ll always be my soldier, he told me.

For the last few weeks I’ve been thinking a lot about what to say about Pope Francis’ visit. I am a trans woman. I am a feminist. I have my own feelings about abortion, but by God it seems to me that the best way to reduce the number of abortions is to keep them legal, to provide comprehensive, thoughtful sex ed, to provide free contraception, and to empower women to consent or not consent and have their choices absolutely minded.

Pope Francis and I disagree on a lot of things. A lot of important things.

But at the same time, it did my heart good when he called the money from the arms trade blood-soaked in front of Congress. It did my heart good to hear Pope Francis speak about inclusion and reconciliation. It does my heart good every time he speaks against the war and in favor of the poor.

The 7,000,000,000 of us live on a very small planet. Each and every one of us is facing trails and challenges. Some face things that Americans with full bellies could barely, barely imagine.

I believe that the great moral work of this century is for the 7,000,000,000 of us to learn to live in just peace with one another. This cannot be the false peace of the strong holding the weak in bondage, but rather true peace, the great peace in which each and every one of us human beings are recognized as a great, single, common family.

There are no easy answers as to how we will get there, but I believe that we must have the courage to hope for it, to continue talking to one another in the faith that we can the ability to love one another and to build a just world that overcomes white supremacy, the patriarchy, the transphobia that kills woman after woman.

We must continue speaking the truth even when it feels like we’re shouting at the wind. We just have to keep working, keep walking, keep the faith that none of this is hopeless and that at the end of the day each other is all we have.