If you’ve spent much time hanging out here on Autostraddle, our very own Brittani Nichols will be a familiar face. As a freelance writer, actor and performer Brittani’s resume includes creating and starring her own TV show (the brilliant Words With Girls), an award-winning feature film, Suicide Kale  (also starring Jasika Nicole, among other cool folks), and regular appearances in the Emmy-award-nominated Transparent. Brittani is also a regular on the stand-up comedy circuit and has just finished writing for the MTV pilot, Yo, This is Racist.

In this Follow Your Arrow interview, Brittani explains how she juggled comedy writing with a regular job until she found her feet, how her identity as a black gender non-conforming lesbian informs her work, and how for her, there’s no such thing as ‘a typical day’. (Her advice for aspiring queer entrepreneurs is also priceless.) 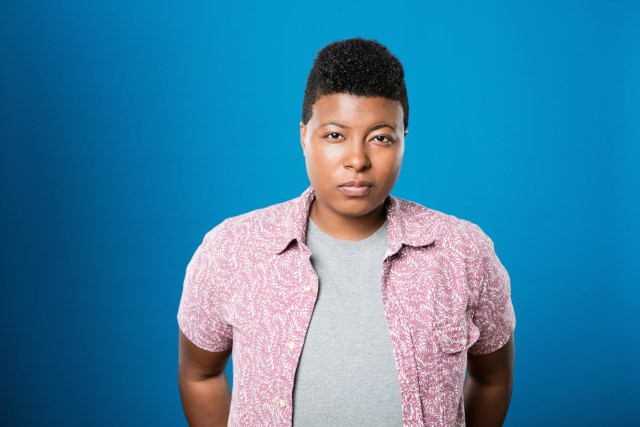 Hi Brittani! Can you describe your business in a paragraph? What’s your mission? Who do you serve?

Nichols and Dimes Ent. is very loosely a production company. It’s just me so I get to solely dictate what the mission is which is just to create content that prioritizes communities that aren’t considered “mainstream” in media which is basically anyone that’s not a straight, able-bodied, cis, white guy. I want to create narratives that let people’s identities inform their points of view instead of dictate the story.

My approach is a combination of precise planning and winging it. I think for the most part, I’m just going for it but in a way that feels strategic and smart. I think it’s weird to even think of myself as a business person because making money rarely factors into my initial plans. I set goals but they’re never finance related. Which is probably why I’m poor. But I’m also creatively fulfilled yet artistically hungry and I think that’s pretty rare. 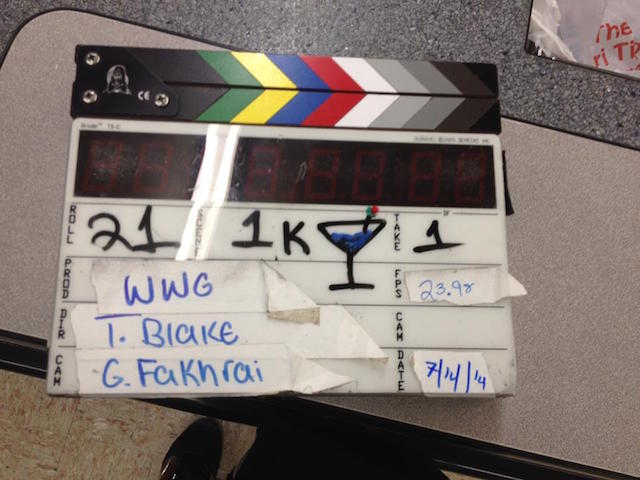 It really depends on the day and what project I have going on. Writing, of course, is a big part of my life but what form that takes changes a lot. It can be a movie, web series, tweets, music, random ramblings, or just a bunch of emails which is definitely my least favorite kind of writing. I always have a to-do list but that’s sort of it as far as a routine goes. I like to feel like my life outside of work is scheduled and regimented and then with work I can do whatever is calling to me at the moment. Unless I have deadlines. Then whatever is due is what has to be calling.

I don’t really like writing in coffee shops so I tend to work in home spaces but just going to work in someone else’s house isn’t always an option so I do it from my apartment mostly. I have a desk that’s usually covered in half-filled notebooks, books, and my room’s most recent acquisitions that I haven’t found a permanent space for yet. When I’m at work but not at home, that usually means I’m at an audition, on set, on stage, or at some sort of event and all of those things vary so much that it’s hard to sum up. I also consider watching TV and movies to be research, so sometimes that’s my bed or a movie theater or a friend’s house. Unless I’m like rewetting Gilmore Girls or something, that’s just for me. 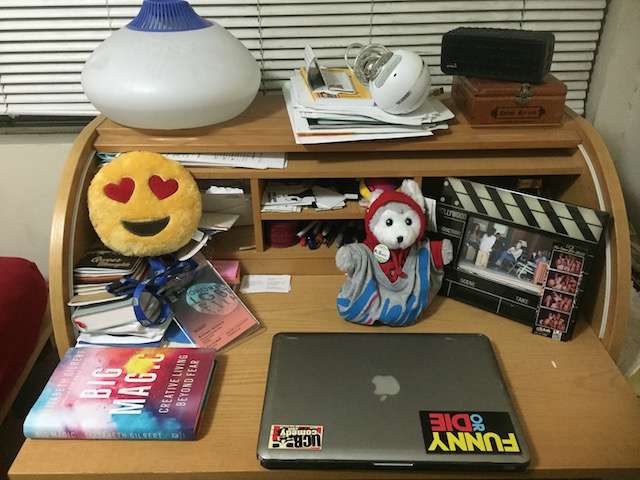 When did you know that this was what you wanted to do? And what were your early goals, your first steps?

I realized it was what I wanted to do in my first year out of college. The thing that really got my wheels turning was when I read a quote from a comedy writer that was staffed on Parks and Rec I think. She said something along the lines of one day she realized that being really nerdy about comedy and loving television was something she could turn into a career, and I had that realization as I read that quote. It had never occurred to me that people do that as their job.

I was living in Fremont, California and biking to work to run a children’s sports camp which, as you can probably imagine, was exhausting. So the first thing I would do when I got home was take a nap but then I would get up and start reading about how to write comedy scripts. I was reading constantly, watching shows, and breaking down storylines, jokes, and patterns. I got really into this show called Happy Endings and started writing a spec for it before the first season was even over. That fall I just picked up and moved and I haven’t had a traditional job since. Pursuing comedy has always been closely tied to pursuing happiness for me and so it didn’t make sense to me that I would come to LA just to do something I hate. I can do that anywhere. This place was for doing things I enjoyed even if it means scraping by for years. 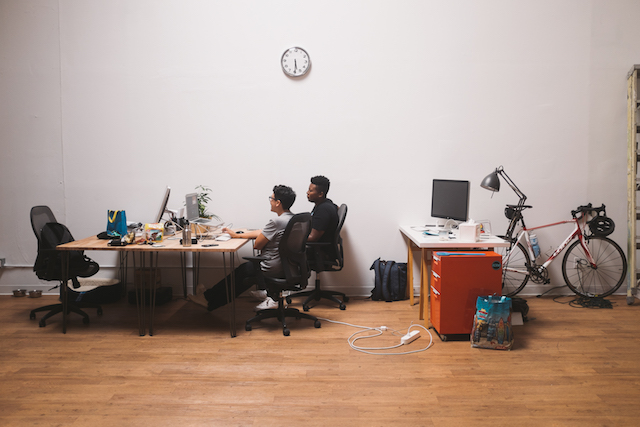 Why do you do this? What makes you spring out of bed in the morning? What’s the best thing about the work you do?

Literally nothing makes me spring out of bed. I guess I used to have these big picture reasons and wanted to make the world a better place, blah blah blah. But I’ve sort of let go of that because life is hard and you should just do what you want to do. Luckily the things that I want seem sort of selfless because of my identity. If I was the aforementioned straight, able-bodied, cis, white guy, my career goals would be boring and unnecessary which is why I think they should all get out of entertainment. 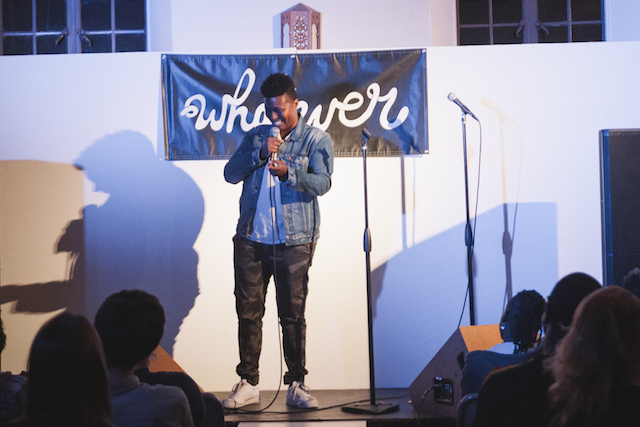 The worst thing is that I am constantly confronted with how unlikely it is for a black gender non-conforming lesbian to make it in this business but I’m actually not that worried about it. The only thing that seems more impossible than someone like me achieving what I want is me specifically not achieving the things I want. Just doesn’t seem like an option. Unless I change my mind and become stay at home momdad which, as far as dreams go, is a close second.

What are the key challenges you face in your work? What are your tactics for overcoming these?

I think life is my biggest challenge. Being a person is very hard. I haven’t figured out how to overcome the human condition.

How do you approach time management?

With great caution and respect.

How about the financial side of things?

My costs mostly just include keeping myself fed, clothed, and sheltered. Harder than it sounds.

Where would you like to see yourself in five, ten years’ time?

I will have amassed more shows, films, and other creative ventures. All of which I am proud of and none of which required me to compromise myself as an artist, friend, or human being. I will have helped other people create things they are also proud of. Also, it’d be nice to have a girlfriend that smiles at me a lot and then when I smile back goes, “what?” all bashful like. 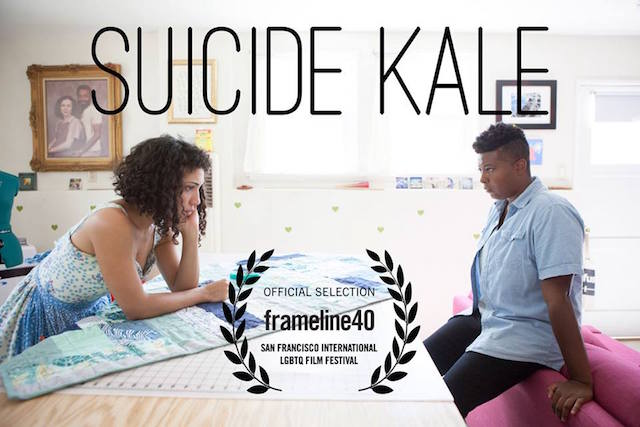 How do you market your business?

What’s the most valuable tool in your kit?

How cute I am.

What websites, blogs, books or people do you rate for business advice or ideas about your work?

I don’t have anything specific but I think everyone should have a book for their heart, a game for their mind, and an activity for their body.

What’s your hot tip for queer women who want to start their own business?

If you’ve somehow missed us all banging on about Brittani’s awesome film Suicide Kale, you should read all about it and watch a trailer right here! You can catch Words With Girls videos on YouTube, or tune into Brand New Podcast (or, if you’ve been waiting your whole life for a radio show that dissects songs from Hamilton, get stuck in to Hamilton the Podcast.) You can also hang out with Brittani on Twitter and Instagram!