WARNING: Spoilers for the entire second season of Dickinson especially and including the finale ahead!

Too often we learn that famous historical figures or well-known stories from the past were straight-washed, their queerness tucked in a locked chest under sheets, in hopes it would be forgotten. But Dickinson works to undo some of what history did in erasing Susan’s name from poem after poem and breathes new life into Emily’s relationship with her sister-in-law. Dickinson puts queerness back in the narrative.

When Season 2 begins, Sue is trying to figure out where she fits in this new life of being Mrs. Austin Dickinson, suddenly a wealthy socialite and doing her best to play the part. Sue meets an editor, Sam Bowles, and gets him to publish Emily, after convincing Emily to let go of some of her poems. At first it seems like Sue just wants Emily to be part of her circles, to come to her parties, to do something lovely for this woman she cares so much about. But then Sue tells Emily that she is overwhelmed with the feelings Emily’s poems give her and wanted to dissipate the beam of her love by spreading her words around. 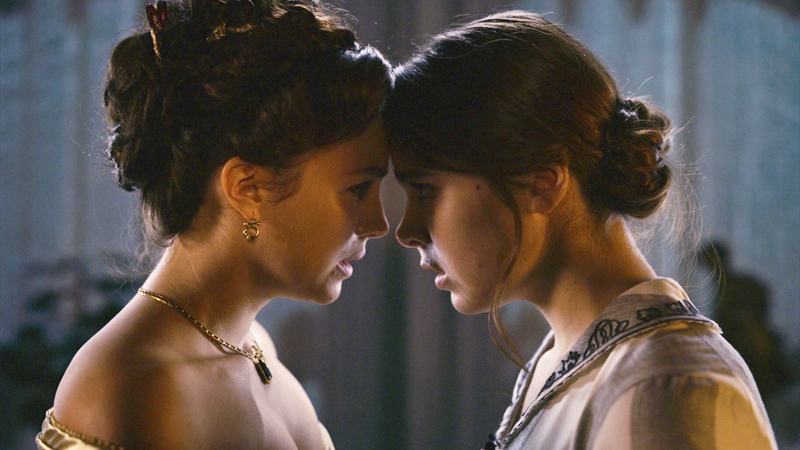 Emily spends most of the rest of the season grappling with whether or not publishing her poems is something she wants. She writes these poems because they come to her, practically unbidden, and she has to write them down or she’ll burst. Emily is always practically vibrating with thoughts and emotions and she has to get them out. She also has feelings for Sue that she can’t express any other way, and she wants Sue to know how deeply and thoroughly loved she is. But what would happen if other people read them? On one hand, she likes the idea of making people feel things. Of making people think and wonder and hope and grieve the way her favorite poets have for her. On the other, fame is a fickle food. What if people didn’t understand or didn’t like her poems?

In fact, the notion consumes her. She spends an entire episode wandering the town like a ghost, being perceived only by her poems and not by her physical self. Felt but not seen. Invisible.

So ultimately she decides not to publish her poems, not because she didn’t want other people to read them as much as she didn’t want the fame that would inevitably come with it, being a female writer from a well-known family in Amherst. And after this whirlwind struggle with the idea of fame, her infatuation with her editor, Emily and Sue’s pattern of orbiting around each other ends in a collision.

In the season finale, Sue goes to see Emily and tries to explain why she tried to push her off on Sam Bowles. She was afraid of the way she felt about Emily, the way Emily and her poems made her feel. She was afraid because she didn’t feel it anywhere else, not at her parties, not with Austin, not with Sam. Just Emily. 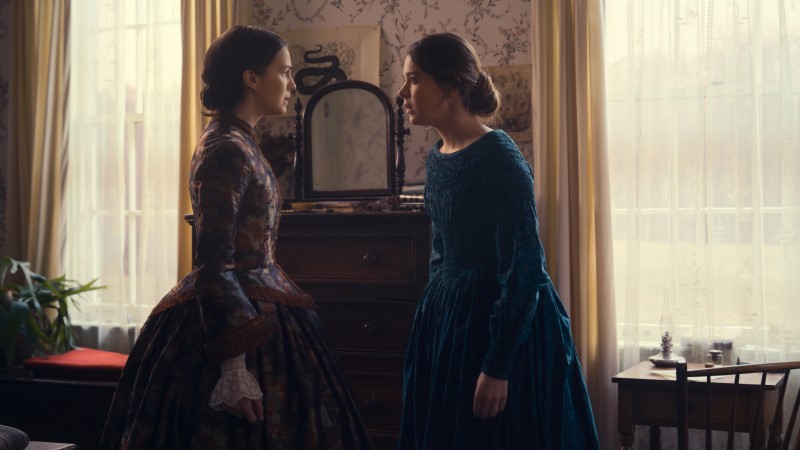 And then Sue comes out and says it. It’s not poetic but it’s crystal clear. “I’m in love with you.”

Emily doesn’t believe it. She’s been hurt by Sue before. But Sue shouts it. Emily pushes back, pushes her, but Sue says it again and again. She’s not backing down, not anymore. And then Sue says the thing that could be a line from one of Emily’s poems, “The only true thing I’ll ever feel is my love for you.”

And finally the passion takes over and they kiss. They kiss and they kiss and they take advantage of the fact that the family is all at church and they take a bath together and feed each other pastries and just live their one blissful day, together. (It was only just now as I was typing out where their family was that I realized that while all this gay sex was going on the church was burning down so now I’m cackling.)

Whoops, I slowed it down #Dickinson pic.twitter.com/mhpbS5urIc

In the afterglow of their time together, Sue says she could die happy, but Emily doesn’t want to see her old friend Death right now. “I feel sorry for the dead today.”

Sue says Emily makes her feel alive and that’s the greatest gift Sue has ever given her. It’s all Emily has ever wanted, it’s why she writes to her so often. The season ends with Sue promising to never let her go again. And that’s the queer joy we can cling to as 2021 trudges on, at least until Season 3 throws more angst at them.

There were other things to love about the season, of course. It was hysterical when it wasn’t toying with my emotions, making Oregon Trail references and omniscient jokes, and the style of modern speech patterns and music set in a period before their time remains charming and fun. Henry having a larger role, the addition of Hattie, Lavinia loosening up, THE SEANCE. The spa episode was a tour de force of amazing actresses, and WHEW when Ella Hunt SANG.

While I’ve always enjoyed the real Emily Dickinson’s poetry, Hailee Steinfeld’s energetic, passionate, brilliant, wild Emily has quickly made her way to the top of my favorite TV characters, and Alena Smith’s Dickinson, my list of favorite shows. Because we deserve to be written back into the narratives we were erased from, so why not with a little extra flair.