Ten years ago the website autostraddle.com came into existence. Ten years ago also happened to be my 18th year of living on planet earth and since I was there when Autostraddle was born, Autostraddle is forever my coming of age story, and a turning point in my life. 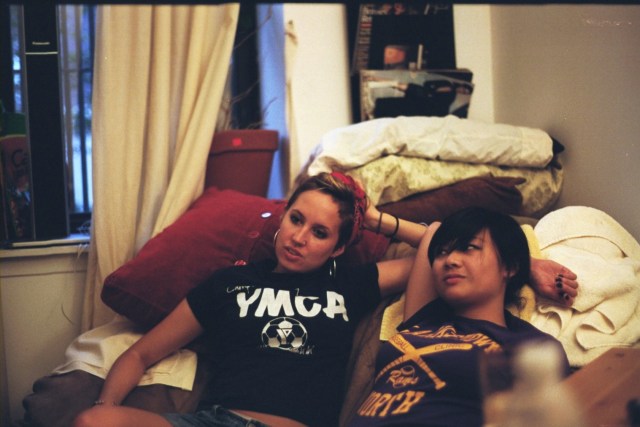 When I was 14 years old, the word “bisexual” fluttered across my brain like a slow butterfly and I thought to myself, oh yeah. And instead of all the lights coming on, they all turned off and everything was dark, and I felt alone in a way I had never felt before. See, before I had realized this about myself, I had been able to convince myself that I wasn’t a lesbian, I liked the boys at my school, I was normal. I clung to that idea while desperately trying to fit in. But suddenly, I had admitted something to myself. I did like girls. And dare I even admit that I might like them more than boys?

Before Google there were these things called books and I was too afraid to read any of the ones I really needed. I was closeted and had no resources. Before Google there was MSN Messenger and AskJeeves and Myspace and LiveJournal and thank goodness for that but I’m still mad that kids these days get to Google the answers to their math homework.

I was in the dark for a few years.

I was helplessly, hopelessly in love with every girl I ever met, and even the ones I never had. I felt helplessly, hopelessly alone. I was out to one friend who accepted me, which was a relief. But I still felt disconnected from everyone else. All around me, kids were calling things gay. School is gay, math is gay, your mom is gay. I knew it wasn’t a good thing. Every day I asked myself, why me? Why do I feel this way? What is wrong with me? I tried dating a guy. I tried to convince myself that I could love him. I pictured us after university, getting married. That’s what I would do, to be normal, if I had to.

Before Autostraddle what it felt like was: I am the only gay person on this earth. I will always be alone. 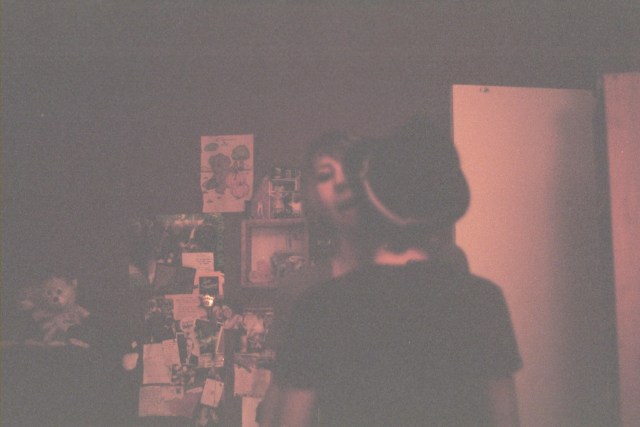 Riese and a;ex in Riese’s old apartment in New York

When I was 16 years old, about a month before my 17th birthday, Tegan and Sara released their album The Con. Tegan and Sara were the first people who made me feel brave enough to be myself. Tegan and Sara gave me permission to be myself and cut my hair off and whisper in a very quiet voice, “I’m gay.” Through the Tegan and Sara forum I spent so much time chatting on, I met one of my very first queer friends from that internet that I would go on to meet in real life.

Before Autostraddle, I was alone, because I didn’t know that you existed. I didn’t know that there was a community of people outside the walls of my high school that loved me for the very thing that I was most ashamed of in my life.

Like many of you who have been here since the beginning, I found Riese through her blog and her L Word recaps. We exchanged some emails, and I still remember the very first one I received. She wrote something like, “do you live in NYC? You could be part of our friend group. We all met on the internet.” And I screamed inside holy fuck why am I 17 and living in Canada.

When Riese launched Autostraddle she put out a call for interns. I applied immediately, and since the only question in the interview was “what kind of chapstick do you use,” and I used Burt’s Bees so aggressively for so many years that I am now allergic to it, I was hired. It was easily one of the most exciting things to happen to me in my life. From there I eventually went to New York to meet the team for the first time, and to meet Riese, to whom I looked up to and basically wanted to be when I was older.

new york is big and small

sometimes i want to ask —

do you remember riese’s apartment on 125th i took the ACE from penn station late at night, every time, there was only one train to new york from montreal and it took all day.

i remember it like i’m looking at a photograph. 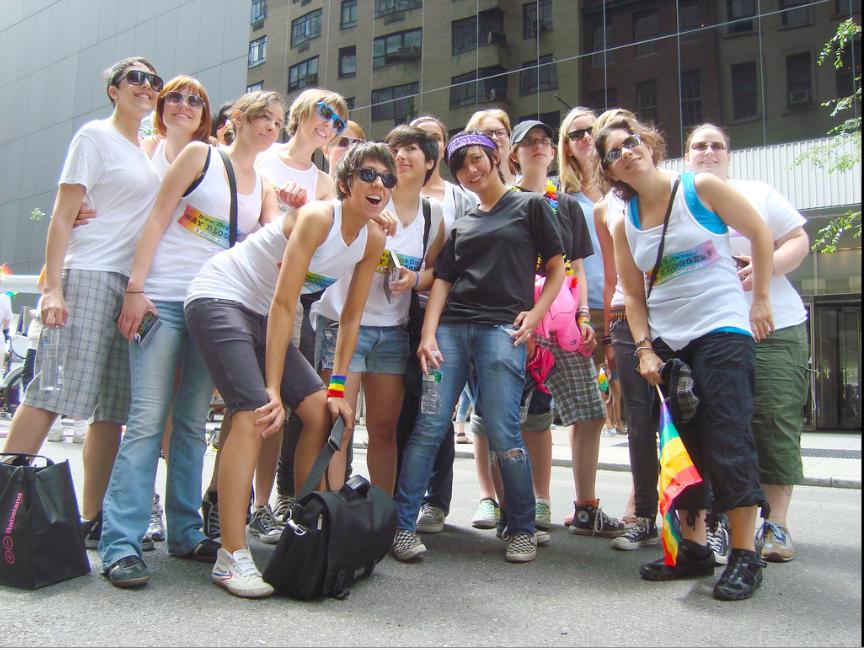 every summer we were there for pride and then sometimes i came on my own to see riese and get stoned and die because i never wanted to go home.

i remember the first pride and i came home so proud i finally told my parents. there is nothing freer than being yourself.

i remember marching in washington and riese’s red sweater.

when i came home from new york i had a light and it was inside my heart and every year i went back and you [you] set it all on fire again.

and everywhere i went i was protected. i was never in the dark. i was alone but i was never really alone because autostraddle was there. in my emails. seriously, we never stopped gchatting.

eventually i had to leave [new york]. we all did. i can’t tell you though, what it really meant to be there, where it all began. you were the first women who loved me back. and i loved you, so, so much. i can’t tell you, though, what it meant to be 18, 19 years old sleeping on an air mattress in riese’s living room or drunk outside mason dixon after i’d snuck inside with a fake id. do you remember that party? i still have the coasters. well, that place is closed now. i didn’t ride the bull. my heart was already exploding. 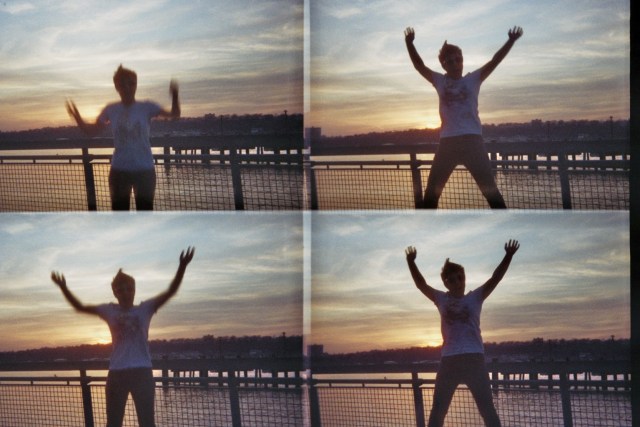 My heart feels so much right now. I remember walking in — no, that’s inaccurate, diving is right — diving in because this couldn’t be something I was scared of. I wouldn’t allow myself to dip my feet in while everyone else got wet.

Look at everybody. Four on the couch, one on the floor. One on a chair. I was the fifth on the steps. One moving around everywhere. I don’t know if this is right but look at everybody. Everybody is so pretty. My eyes, wide, wide, wide, soaking everything in. Dear brain, promise me you’ll never forget this.

I never want to let this go. 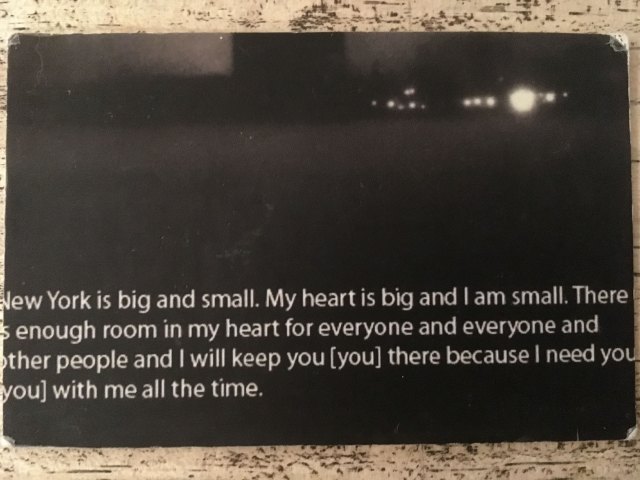 An online friend of Riese’s made this for me. I don’t remember his name but his blog was called Achtung Baby. I still keep it in my wallet.