While 2020 has been a rough year for just about everyone, 2020 has also been a year of many intersex victories and of the overall global advancement of intersex rights.

As an intersex person myself, seeing the victories that have taken place within the intersex community in the past year alone has been encouraging. Growing up, I was pressured into changing my body by doctors who didn’t understand me. Because of the lack of intersex education that existed at the time, I thought that surely they knew more than I did and had my best interests at heart. Unfortunately, I’ve come to learn that this is not the case. When doctors pressured me into taking hormones, they wanted me to fit into their idea of what a “normal girl” looks like. When doctors misdiagnosed me and hid my tests from me because of the stigma surrounding the intersex label, they wanted me to conform to the gender and sex binaries. For the longest time, I accepted that being intersex meant living in the shadows of shame and stigma that doctors imposed on me—but the wins that intersex people have achieved in 2020 is proof that things are getting better and that the next generation of intersex people won’t have to suffer the same way my generation has.

That said, perhaps the two biggest victories for the intersex community in 2020 by far have been the two children’s hospitals who have moved to officially end intersex surgery.

Intersex surgery—also referred to as intersex genital mutilation (IGM), a term that was coined by the Organization Intersex International (OII)—is surgery that is carried out upon the external genitalia of intersex infants and children when their genitals do not unambiguously pass as “male” or “female”. This surgery often includes clitorises that are deemed “too large” by doctors; urethral openings that are thought to be in the “wrong” place; and vaginal openings that doctors consider “too small,” or that are naturally closed. Though these surgeries are commonly referred to by the medical community as “normalizing”, they’re very rarely medically necessary and often create lifelong complications for the individual in question instead.

Over the past few years, more and more intersex people have begun to share their stories about the detrimental effects that intersex surgery has had on their lives. Clitoral reductions or clitoral “repositioning” often leads to scarring, nerve damage, and the complete loss of sexual sensation. Vaginoplasties can create chronic UTIs and require that a parent or doctor perform vaginal dilation until a child is old enough to do so themselves—which many intersex people experience as sexual violence that can lead to PTSD. Gonadectomies, often performed when a child’s internal gonads do not match their external anatomy, are sterilizing and force individuals onto lifelong hormone replacement therapy. And the repositioning of a urethral opening can create ongoing pain, scar tissue, loss of sensation, and the need for multiple follow-up surgeries as the individual ages. “I was born healthy, but my parents were told I needed surgery,” InterACT youth member Anick shared through the #MyIntersexBody campaign. “My first surgery was at four months old and since then I’ve had more than I can remember because of complications.” 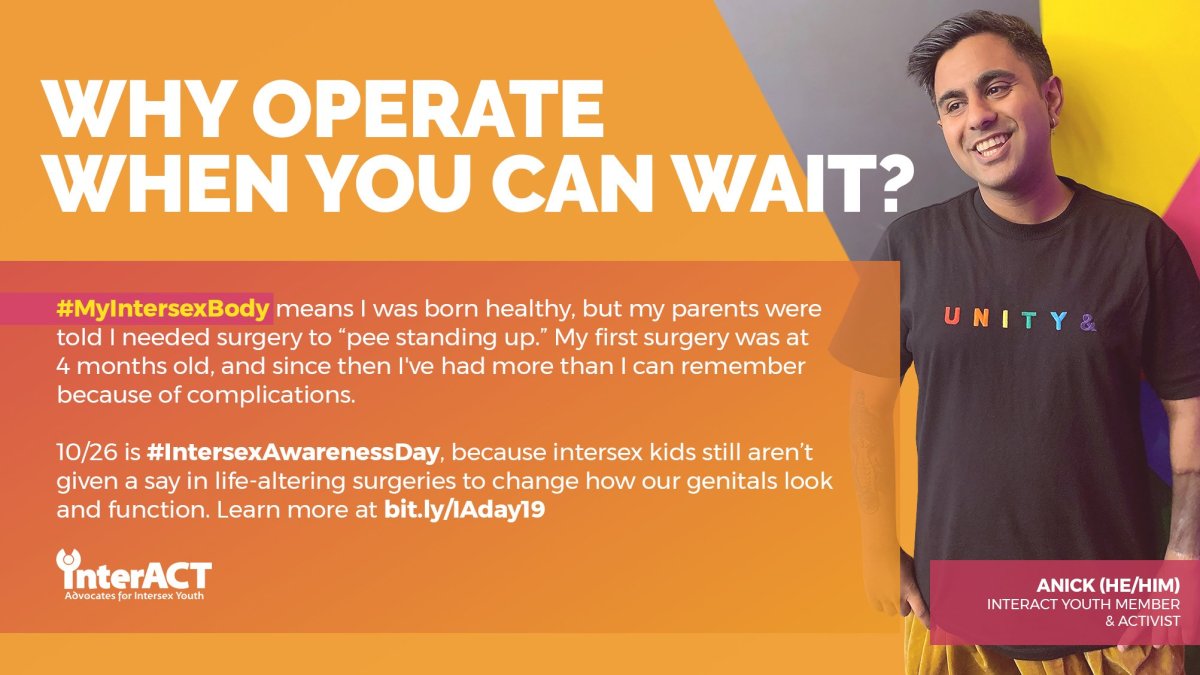 Anick, a youth member of InterACT.

Further, not only are these surgeries physically damaging, but they continue to perpetuate a culture of shame around intersex bodies—and the resulting social and medical stigma is the reason that so many intersex people don’t talk about themselves, their bodies, or the consequences of a surgery that they never agreed to. “I wish they had left my body alone,” InterACT youth member Banti shared, a statement that many intersex people have echoed throughout the years.

The Intersex Justice Project (IJP) is one organization, co-founded by Pidgeon Pagonis and Sean Saifa Wall, with the primary goal to end intersex surgery—a phrase that sparked the #EndIntersexSurgery hashtag and movement on social media. Over the course of a three-year campaign, Pagonis and Wall directed their efforts to end intersex surgery at the Ann & Robert H. Lurie Children’s Hospital of Chicago. This campaign included protests outside of Lurie Children’s; a “takeover” of the L train in Chicago, where intersex activists spread awareness by reading aloud intersex human rights violations taking place at Lurie Children’s; a call-to-action on social media to pressure two of the doctors performing intersex surgeries at Lurie Children’s to cease immediately; and a petition on Change.org that garnered nearly 50,000 signatures.

On July 28th, Lurie Children’s Hospital became the first hospital in the United States to apologize for performing intersex surgeries on intersex children and infants, and to express that they will no longer be performing intersex surgeries unless absolutely medically necessary moving forward. “Intersex activists are pushing for a model of existence that is outside of these very rigid, socially-constructed norms,” Wall shared with me, pointing at the gender norms and expectations evident within the history of intersex surgeries like those performed at Lurie Children’s. “We’re fighting for the complexity of our bodies. We’re fighting for our bodies to exist exactly as they are.” 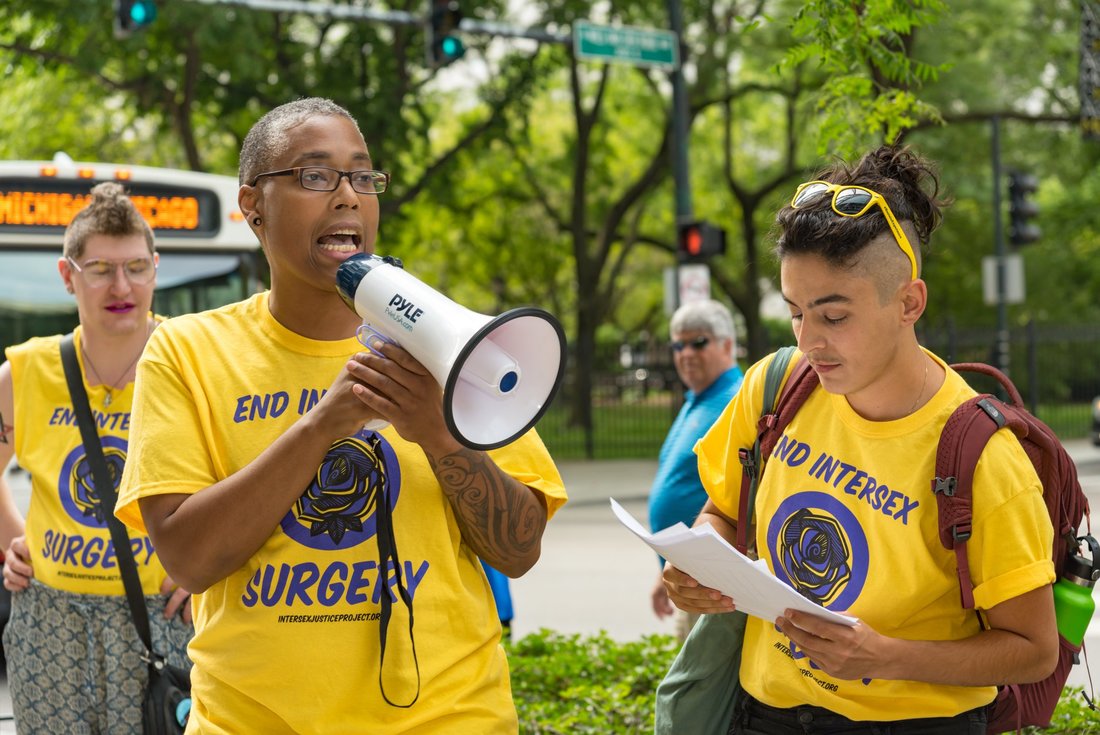 Sean Saifa Wall and Pidgeon Pagonis stand at a rally speaking to a crowd.

A few months after this decision on October 21st, the Boston Children’s Hospital similarly announced that it will no longer be performing two common types of intersex surgeries—clitoroplasties and vaginoplasties. Though this decision did not come with a formal apology nor assurance that the hospital will cease other intersex surgeries and proecdures, it remains a historic decision that sets a precedent amongst children’s hospitals. “One hospital was cool, but people might [consider it] an anomaly,” Pagonis told USA Today. “Now that there are two hospitals, people in the community are going to feel more ability to pressure their hospitals to do the same.”

But these wins aren’t the only wins that the intersex community has experienced in 2020, nor have all wins been contained solely to the United States. Because the fight for intersex rights has thus far been a global fight, many other countries—and many international intersex activists—have seen the recognition and advancement of intersex rights too.

On August 25th, Ecuador’s National Assembly approved a new health code aimed at explicitly guaranteeing the rights of intersex people. Specifically, this new health code prohibits any medical procedure “that violates the personal integrity of any person who has not reached puberty” except when medically necessary—a direct push to permanently end intersex surgeries in Ecuador. Should this bill pass into law, it will ensure that all future intersex children born in Ecuador will be the sole decision-makers for any surgeries or procedures that they undergo.

On October 1st, 33 countries around the world called upon the U.N. Human Rights Council to protect the bodily autonomy of intersex people. “Our bodies were born whole, and only we should have had the right to decide what happens to them,” Mauro Cabral Grinspan of GATE, a global campaign for trans, nonbinary and intersex people, said. This is the first time that a global push for intersex rights of this kind has taken place—with each state acknowledging the harm done to intersex people and urging their governments to take action in the fight for intersex rights. Back in 2013, the U.N. acknowleged intersex surgery as a form of torture and called upon its states to repeal any laws allowing genital “normalizing” surgeries without the informed consent of the individual in question. That said, the global fight to end intersex surgery is gaining considerable support—a move that should prove to be instrumental in stopping the human rights violations still happening within the global intersex community.

On November 6th, in the days leading up to Intersex Solidarity Day on November 8, Belgium’s Institute for Equality between Women and Men (IEWM) released a new campaign to spread intersex awareness. This campaign included a brochure filled with the testimony of intersex parents, stories from intersex people, and information about intersex-affirming organizations, alongside a video explaining what it means to be intersex. “Adults with intersex variations often say they would have preferred to make an informed choice themselves,” the IEWM noted. Thus, by circulating these resources, the IEWM is taking steps to ensure that the future parents of intersex children in Belgium can make the most informed decision possible to avoid pursuing nonconsensual intersex surgeries.

Despite the victories that 2020 has brought the intersex community and the moves made to push intersex rights in the next direction, the intersex community is still up against many challenges. The widespread lack of comprehensive intersex education means that the parents of intersex children are less equipped to make informed decisions about raising intersex children with bodily autonomy. The lack of training that hospitals and medical professionals receive on intersex issues and bodies means that a large majority of intersex people avoid seeking medical attention because they fear being mistreated. The social shame and stigma surrounding the intersex experience means that intersex people are often too afraid to discuss their needs and experiences. And, of course, intersex surgery is still happening on countless intersex children and infants every single day around the world.

But thanks to the tireless work of intersex advocates of many generations, progress is inching forward. Slowly, but surely, we’re creating a better future for intersex people.

2020 has turned out to be an instrumental year for the intersex community—but with the support that the community has gained this year, and a better understanding of the aforementioned issues, 2021 is shaping up to be even better.

Mari Wrobi is a QTPOC and LGBTQIA+ advocate born and raised in Sacramento, California. They currently work full-time at the first and only shelter for LGBTQ+ youth experiencing homelessness in Sacramento; are an intersex rights advocate and educator with interACT: Advocates for Intersex Youth; and are an artist, photographer, and graphic designer who focuses on creating art that is 100% queer.