Let me congratulate you on making it another week. Laneia will be back to guide you through the headlines on Monday, but I had a wonderful time with each and every one of you. Popsicles! Journaling about Gratitude! We had it all. Thank you for not calling me out about my overindulgence in Beyoncé. Here’s some news from the rest of the week.

THIS MOVIE ALREADY LOOKS SO EXCELLENT AND LISTEN I JUST CAN’T WAIT ANYMORE.

The trailer for The Miseducation of Cameron Post dropped yesterday afternoon. The Sundance Grand Jury Prize winner is based on Emily M. Danforth’s 2012 novel of the same name. It takes place in 1993 and follows teenage Cameron Post (Chloë Moretz) as she’s forced to attend gay conversion therapy after being caught having sex with another girl. Keen eyes will also peep Sasha Lane in the trailer, who you perhaps also saw in this summer’s Hearts Beat Loud? If you haven’t, you definitely should.

“I built the GenForward Survey, a nationally representative survey of over 1,750 young adults ages 18-34. The survey is conducted bimonthly and includes oversamples of African-American, Latinx, and Asian-American young adults, ensuring we can accurately represent their positions and the positions of all millennials on important issues facing the country.” — Calling all my queer data nerds! You’re going to enjoy this brief breakdown of an ongoing project conducted black lesbian political scientist Dr. Cathy Cohen.

The Realities of Having A Period As A Transgender Man.

Lez Heat Things Up: The 16 Best Lesbian Movie Kisses Of All Time.

These Activists Used Soccer Jerseys to Protest Homophobia & Anti-LGBTQ Laws in Russia. (The men’s World Cup finals are this Sunday. I have no idea what’s going on. I just root for whatever team has the most people of color in it. That means on Sunday, I’m pulling for France! We have fun.)

In Monday’s column we began a discussion about the attempted “take over” of London Pride by anti-trans protestors. Here’s a deeper dive and a follow up: Why Are Some Feminists In The UK Freaking Out About Trans Rights?

And then on Monday night, Trump selected Brett Kavanaugh to be his choice for the vacated Supreme Court seat. By now you’re probably all caught up on that news. Let’s also pay attention to The Five Court Cases That Could Change the Future of LGBT Rights.

Hey! Did you check out the official launch of Sapphic Lasers’ “Dyke Bars Never Last” music video, because you definitely should!

Yes, Lesbians Do It Better. I feel like we circle back to this every few years, but I’ll still take another victory lap. Statistically speaking, women who are engaging in queer sex are having more a satisfying sex life.

Pat yourself on the back for all the wonderful decisions you’re making.

From The New York Times, Why Breast-Feeding Scares Donald Trump.

File this under, “Duh! Things Queer Women Already Knew”: Women Were Pirates, Too.

“Public space belongs to everyone. If racists don’t like hearing Spanish being spoken in a deli, or having Native American teens on a campus tour, or seeing black folks going on about their lives, they should just stay home.” — The Social Shaming of Racists Is Working, by Laila Lalami at The Nation.

Senator Tammy Duckworth on Why Kids Separated at the Border Still Need Your Help. (Speaking of, from The New York Times, For Many LGBT Migrants, North of the Border Is No Refuge. And from The Cut, Exactly How Many Separated Immigrant Families Have Been Reunited? Answer: Not many.)

The summer before I left home for graduate school, I drove down to the rural Louisiana countryside to sit on the porch with my grandma. As I took the four steps up to the house, face scowling at the hot Louisiana sun beating down on my brow, my Gram squinted at me, called me by my nickname, and declared, “It’s time for you to start having sex!”

My grandmother had already developed a pragmatic blend of both feminism and Christianity that worked in the context of her life as a rural poor Southern Black woman born two years before the Great Depression. I was still far too much of a Christian zealot to be either pragmatic or feminist. My grandmother didn’t have all the language for these differing ideological positions, but she had good sense. She looked at me with those laser eyes that Black mamas use to see right through you, and commanded me to “Start having sex.” She meant real good sex. Sex that left you with telltale signs that you had been touched right and handled with care. I didn’t exude sexuality. I didn’t exude grown womanhood. I did not look like a Black girl comfortable in my own skin. Because I wasn’t. I was trapped in a raging battle between my spirit and my flesh. 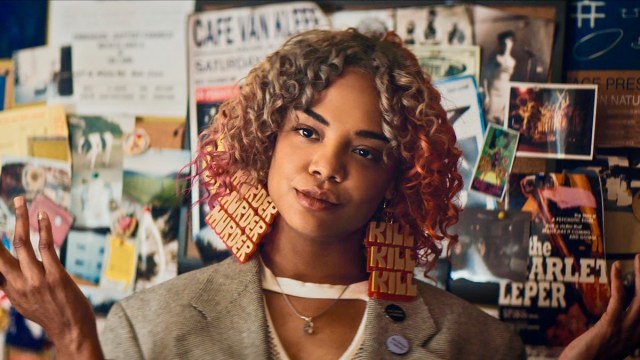 Her character in the movie is named “Detroit.” I think that makes her my girlfriend.

For anyone else like me, who just nods along when a cute girl starts complaining about “Mercury in retrograde” or “the eclipse over Mars” or whatever, I have found us a cheat sheet! Your Guide to This Summer’s Astrological Mess of Retrogrades and Eclipses.

How To Sleep When It’s Hot Outside & You Don’t Have AC.

While we’re on the subject of “How To”: 10 Ways How To Quit Your Job Gracefully. (Just in case. You never know.)

More than half a million people went to last weekend’s Essence Festival. That’s more than the annual attendance of Coachella AND SXSW. Hell, it’s almost as much as the attendance of those those festivals combined. And yet, because the Essence Festival primarily is attended by black women, it doesn’t get the same media shine. Well, I’m using my tiny little platform to change some of that. Here’s 25 black women showing out with their best fashion last weekend in New Orleans.

13 Books by Asian and Asian American Authors That You Could Be Reading While We All Wait For Crazy Rich Asians To Hit Theaters Next Month.

Nipple Piercings Aren’t As Scary As You Think They Are. (I think they definitely are, but hey! You do you.)

And finally, have we talked about how much I love our Community Editor Vanessa Friedman? Because I really love her:

the guy who always hits on me at the park just told me my (fake) septum piercing "takes away from the beauty of your face" and when i said "good thing i didn't get it for you" he said "just thought you'd want my opinion" so now i need to get it pierced for real immediately 🔪🔪 pic.twitter.com/yvkehDHnC5

Have a great weekend!