In this week’s Tuesday edition of Boob(s On Your) Tube, we check in with some of the minor queer characters on TV this fall and some of the major characters with minor queer stories; plus, another reminder that Jane the Virgin is the best thing on television and you should be watching it dammit. 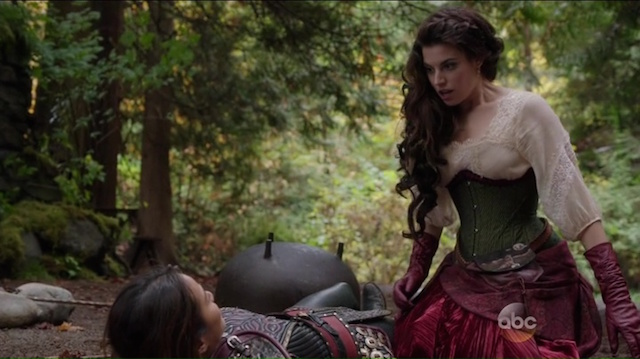 Let’s get down to business. 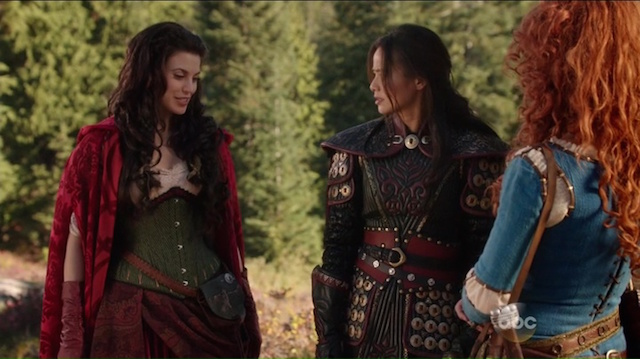 Lady, I’ll make a woman out of you.

Wait, one other thing: This hugely influential pastor who wants LGBT people to be murdered to death in the United States, this motherfucker whose followers are being courted by three GOP candidates, he thinks Elsa’s a lesbian too. 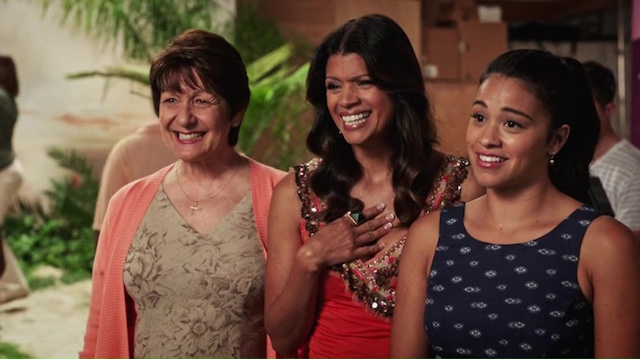 I know! No love triangle at ALL this week!

This week’s Jane the Virgin masterfully sped through five months of story to bring all the characters, including little Mateo, to new places with themselves and with each other. Never has a show so brilliantly explored the ideals of third wave feminism, or so unabashedly promoted a political ideology without actually bashing anyone in the face with it. (#Vote #Vote #Vote) Each commercial break moves Jane forward a month in her life and examines a new challenge she faces as both a mother and a grad student. Choosing to pursue an advanced degree means she misses sing-along classes (though Rafael does an adorable job subbing in for her), sometimes forgets to give Mateo “tummy time” so he ends up needing a little helmet to make his head round again, and is unable to attend the helmet-fitting appointment because she’s at a mandatory school retreat. She’s still a great mom; she just can’t give Mateo all her time. Likewise, she gets kicked out of her first grad school class for fielding a call from Mateo’s physician, pulls down her first C (minus!), is lambasted on the regular by her professor, and has a nearly impossible time fitting in with her classmates. She’s a great student; she just can’t give school all her time.

In between the time jumps, Jane tackles the decision to stop breastfeeding/pumping and allow Mateo to go with a formula/semi-solid food diet and agrees to finally go on a date with Rafael — because she’s not just a mom and a student and all her decisions can’t be about her child or her career. So the show also allows her to make decisions that are also good for herself. It’s remarkable. 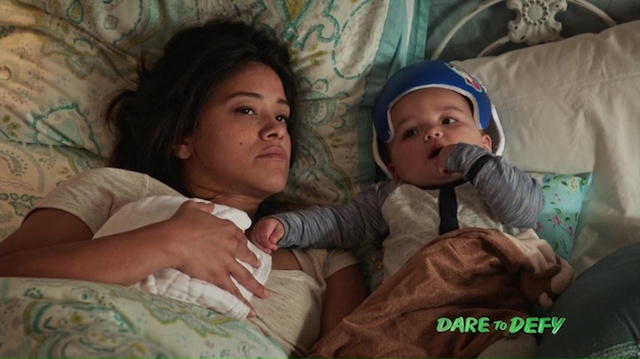 Okay, this is the best part. She climbs up on the taxi and she’s like, “You’re a wanker, number nine!”

The conceit of this episode is milestones, and each time the plot leaps forward, Jane imagines a world in which she and Rafael have died and Mateo is left with his father’s $40 million trust fund. She doesn’t want him to be a five-year-old baller, making it rain as he drives around the Marbella in his tiny tots Porsche. And she doesn’t want him to be Oliver Twist, either, begging for more porridge from the kitchen. She and Rafael decide to write a clause into his trust fund that says for every dollar he inherits, he must give a dollar away to charity. It’s five-year-old socially conscious Mateo who delivers this speech to the UN:

I’d like to thank my parents, of course, for instilling in me the desire to give back. Thank you to my mentors, Michelle Obama and Angelina Jolie, whose fight to make sure all girls have access to education led me to the Peace Corps and Let Girls Learn. I’m here at the U.N. because more than 62 million girls don’t have access to education — GASP! I’m sorry, I have to go pee-pee! 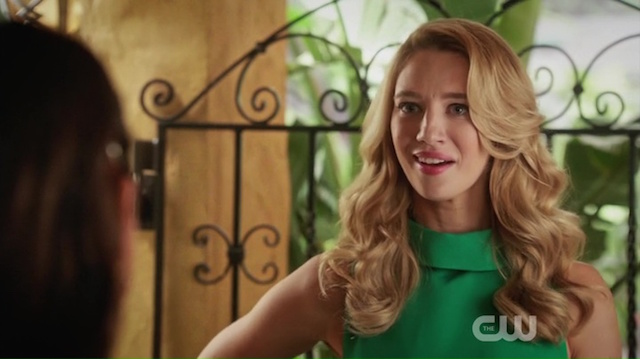 I’m having twins! I hope they’re as excellent as Fred and George Weasley.

That this show exists, championing feminism and celebrating the way Jane’s mother and grandmother empower her to accomplish every thing she’s ever dreamed of, and that it doesn’t shy away from talking about America’s atrocious immigration policy (and the vile garbage the GOP continues to spew at Latino immigrants), and that it is so sure-footed with every storytelling decision it makes, and that it is just such entertaining television gives me hope for the world. Plus, now that Petra has been humanized and she and Jane are friends, there’s no more girl-on-girl violence! It comforts me, at least, when the conversation turns as hostile as it has now, in our current election cycle. 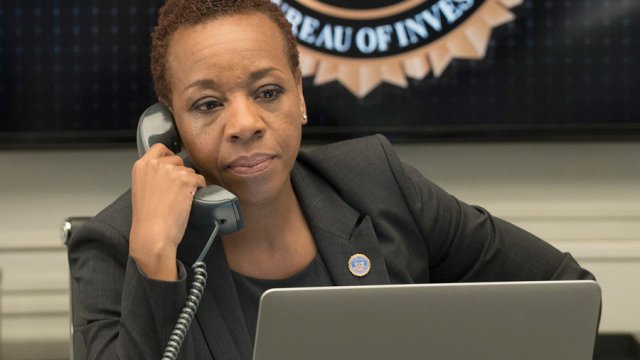 God of Mischief? No, there’s no one here by that name. I think you have the wrong number.

Blindspot is the story about how Lady Sif* woke up inside a duffle bag in Times Square one time covered in tattoos and with no recollection of Loki or any of those guys. There is a disgruntled white detective guy wandering around mansplaining everything, which seems like it’s going to be the main plot of the show (and in some ways it is), but then sometimes Lady Sif remembers she’s an Asgardian warrior and she starts doing awesome ninja moves on bad guys. Anyway, the person is charge of Lady Sif and Mansplainer is a woman named Mayfair. Last week, we found out about the illegal surveillance program Mayfair’s been participating in, and also that she has a former lesbian lover named Sofia who works at the White House and has connections to help them make a run for it and avoid prosecution for participating in Project Daylight. Mayfair was basically like, “I love you, but no thank you.” And so Sophia killed herself. The end.

*On the show, Lady Sif is named Jane. Jane Doe. 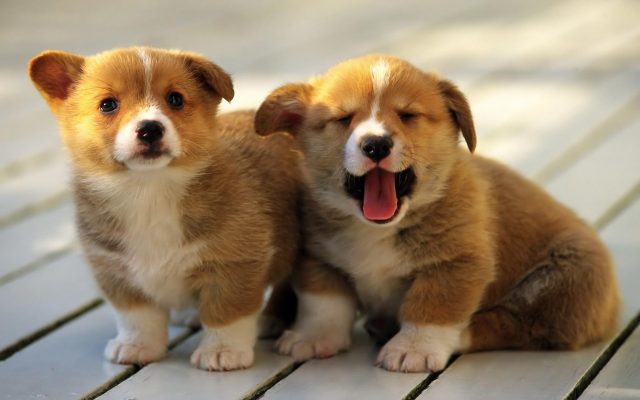 La la la, I used to have to write about Ryan Murphy here, but now there are puppies.

The joy I feel when I get to delete Scream Queens off the Boob(s On Your) Tube formatting template I made in Google Docs is always such a glory. It’s why I don’t delete it permanently. I like the power and pleasure of erasing it, letter-by-letter, every Tuesday. 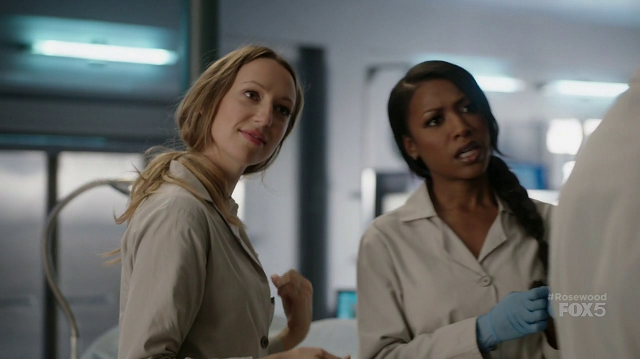 Pippy and TMI are still alive as Rosewood skids toward its midseason break. They’re orbiting Rosie and serving his story, which makes sense on account of they are supporting characters on a show named after him. Lesbians like these are important on TV, they really are. Just being there and being inconsequentially gay in every episode: it’s actually a thing that matters a big deal. It’s so normal. But it’s not very engaging and, unlike Jane the Virgin, I’m only watching this one for the queers, so I’m really rooting for a storyline to make them more prominent and fully realized. 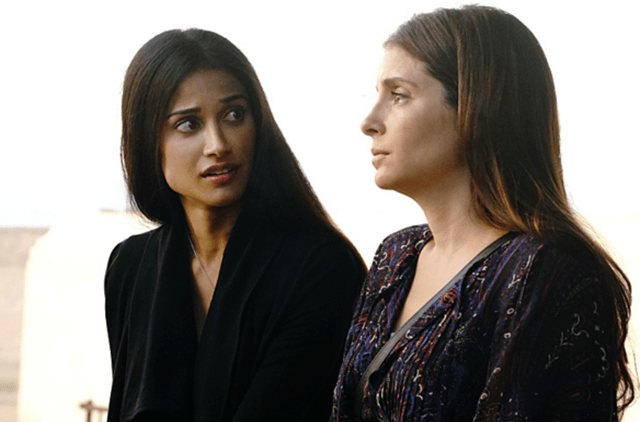 Girl, you gotta stop letting them typecast you.

I saw a screening of the Code Black pilot at the Paley Center this summer, and it was so bloody and had so much blood noises that my friends kept nervously glancing over at me with wide, terrified eyes while I covered my whole head with my hands and rocked back and forth in my seat; I think they thought I was going to actually vomit. (And I’ll be honest with you: I was close.) I love me some Marcia Gay Harden — Whip It forever — but holy lord, the gore! Hey, but one of the new batch of doctors in the world’s bloodiest ER is a queer lady. An Indian queer lady! A first year resident! I watched a supercut of her scenes so I could introduce you, but there’s no way in Azkaban I’m going to be able to watch this actual show.

Malaya Pineda is the queer doctor in question. She’s got a girlfriend. Sometimes her girlfriend picks her up from work and they smooch in the car. A couple of week’s ago, Dr. Pineda’s ex-girlfriend showed up in the ER, pregnant and in need of an MRI. Turned out she had cancer! Apparently she caught Dead TV Lesbian syndrome from Leslie Shay when she was playing her girlfriend on Chicago Fire. She might live; we don’t know. She was still alive when the episode ended, so it wasn’t lightspeed-spreading Chaikencancer like what Dana Fairbanks died from. There’s always hope.

Is that fucking Carmilla? We might as well go home. Not a single lesbian in this place is going to pay attention to us if she’s here.

I’m not much into vampires, except for Marceline the Vampire Queen and Buffy slaying them. And Carmilla, too, but not for the lore; I just think she and Laura kiss real good. I’ve never watched TVD and honestly only knew who Elana was from GIF sets on Tumblr (which obviously led me to believe she was kinda gay). (She’s not.) So this weekend I watched as much of season seven as I could to get a handle on this “lethal lesbian couple,” Nora and Mary Louise. I think both of them are half-witch/half-vampires and have been together for like a full century and are only just now getting used to being able to hold hands in public. They’re adorable with each other, but also they are assholes. They maim and murder for giggles and if one of them flirts with anyone else. That is what I know so far; I will keep you updated.