On January 7th it was announced that military members who were discharged without full separation pay under DADT will now be fully compensated with the remainder of their pay. This victory comes after a class action law suit, Collins v. United States, brought forward by the American Civil Liberties Union and its New Mexico affiliate. It was named after the lead plaintiff, Richard Collins, who was honorably discharged from the Air Force in 2006 after two civilians reported to the military that they saw him kissing his boyfriend a whole 10 miles from his base. Though Collins wasn’t even on duty at the time, he was discharged and further discriminated against by not being given his full separation pay. On Monday, Collins issued a statement saying that the “settlement means a lot to him and others who were forced out of the military against their will.” 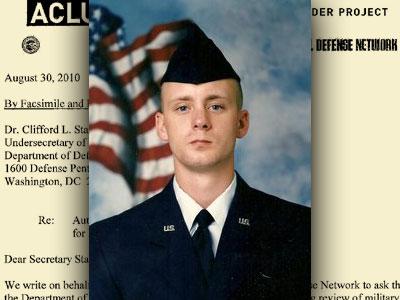 Separation pay is given to military members who have served at least six years before being involuntarily and honorably discharged. However, under Defense Department Policy dating back to 1991, certain factors, such as drug or alcohol abuse, discharge in the interests of national security, and yes, homosexuality, can prevent a person from obtaining his or her full separation pay. Because it’s a separate Defense Department policy, it wasn’t repealed last year along with DADT.

Laura Schauer Ives, the managing attorney for ACLU of New Mexico, is calling the settlement a “long-delayed justice.”

“There was absolutely no need to subject these service members to a double dose of discrimination by removing them from the armed forces in the first place, and then denying them this small benefit to ease the transition to civilian life,” she said.

To use military language, this battle has been won. But I’m still left with a lot of questions and concerns for what remains to be achieved when it comes to gay people and the American military. According to the American Civil Liberties Union, the settlement will force the military to pay a total sum of $2.4 million, but it will only cover the 180 veterans who were discharged on or after November 10, 2004. Considering the fact that the Defense Department policy went into effect way back in 1991, and DADT lasted from 1993 to 2011, I’m sure there’s a significant number of military personnel who have been discharged for being gay and won’t get their full separation pay because they unfortunately didn’t make the November 10, 2004 cut-off. 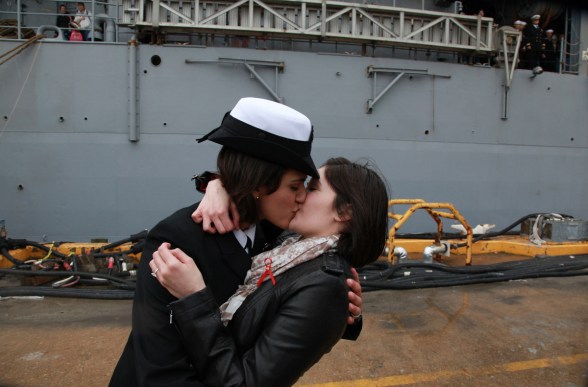 via the Navy Homecoming Kiss

And by no means does the repeal of DADT and this recent settlement signal the end of all problems for gay people in the military. As Rachel explained, the spouses of queer people in the military have yet to be given the same benefits as the partners of straight service members. A new bill, HR 6046, or the Military Spouses Equal Treatment Act of 2012, would change the definition of “spouse” to allow all couples to receive the same benefits, but it hasn’t passed yet; so as we drink to this recent victory for gays in the American military, let’s remember to keep some in the fridge for the victories that have yet to be won.