GLAAD has released its 2012 Network Responsibility Index, which is a fancier way of saying that GLAAD posted its Gay TV Report Card. Every summer, GLAAD rates cable and broadcast networks based on the amount of hours they feature LGBT-inclusive programming, as well as the network’s gender and racial diversity.

The results are revealing and not particularly positive. Representations of gay men far outnumber those of gay women, and queer people of color are eclipsed by am overwhelming amount of white characters. Not a single network was graded as “Excellent” and too many received “Failing” as their final rating. Networks that carried strong LGBTQ programming were also host to shows that featured homophobia or offensive humor. For every narrative that the queer community embraced, ten storylines ignored, negated or flat out insulted us.

Showtime took the top slot with a “Good” rating due to 46% of its original programming featuring positive LGBT representations. Credit goes to Ilene Chaiken’s stumbling into her agent’s office on bath salts with “I swear this is a good idea hear me out” venture into reality television, The Real L Word. ABC Family was the only network where lesbian representation was higher than gay males: a whopping 45 to 7 hours. Special thanks to Emily and all the ladies who have locked lips with Emily (but mostly Paige for being the very best of the lady lip lockers). Extra points to Emily for being a queer lady of color.

CBS received a “Failing” despite the fact that Kalinda can get it, and get it hard. So did the History Channel and TBS. TLC, the same network that made the Palin family reality stars and has been accused of leaning in a conservative direction, received an “Adequate.” They can address their thank you cards to Glitzy, Honey Boo Boo’s “pageant gay pig”.

It’s important to note that GLAAD’s ratings reflect representation in the barest terms. Glee is a diversity gold mine as far as the ratings system is concerned, but the fact that it’s also riddled with tokenism and problematic portrayals does not have an effect on the final score. Even on shows where queerness makes an appearance, those portrayals need to be questioned. It’s not enough to have  a gay character, to show a clip of two women kissing, or to have storylines that feature homosexuality. Yes, it’s a big deal that I can watch a teen drama where my favorite couple is the same sexuality as me (teen dramas are typically the most welcome genres to introducing LGBTQ characters and narratives). But it’s not enough, and it’s not something I have to settle for. There are crucial questions to be asked, and asked relentlessly: where are the queer people of color? Where are all the queers who are not gay men?

When we see queer women in media, what are we seeing? The lesbian couples that arguably receive the most attention on current network television are Brittany and Santana, Callie and Arizona, and Paige and Emily. Besides their sweet lady kisses, where are the indicators of queerness? Why is it that they’re all undeniably femme, conventionally attractive and able-bodied? This is the question that I come back to again and again: why do queer women on television all look the same? 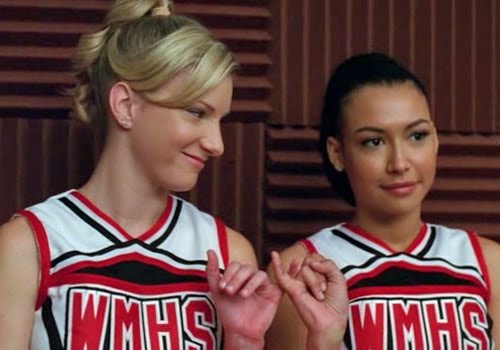 Femme representation in the media is incredibly important — and strangely ironic given the issues surrounding femme invisibility within the queer community. By no means am I arguing against the necessity of femmes or femme presentation in the media. But I’m concerned by the fact that a female-bodied person presenting in a masculine or atypical way is absent from the queer media presence. Seriously, where the hell are all the butches?

The media has its own reasons for staying away from butch representation, and maybe they’re legitimate ones. Maybe they’re afraid to tap into representations that could be construed as stereotypes. Maybe they’re afraid that showing a female-bodied person who is not conventionally attractive, whose body and expression is not still desirable to a heterosexual male and thus the mainstream audience, is too risky for ratings. Maybe a legacy of lesbians only appearing in stereotypical roles makes networks want to showcase queer women as being “normal,” and that definition of normal means making them look like traditionally feminine women. Maybe we are in a “post-queer society” where it doesn’t matter what queers look like, and we don’t need to show butch lesbians to represent queerness. Too bad that’s bullshit.

Being a masculine-presenting female body — or any kind of body that isn’t within the norm — that isn’t conventionally attractive or widely represented means you’ve already struggling to love yourself.  I own the fact that I’ve had to fight for my appearance to be accepted by my family and my surroundings. I know a lot of butches who do the same thing, and we’re lucky that there are beautiful people in this world who love our bodies and love the parts of us that society deems undesirable. Excuse me while I shed some precious butch tears.

I wish that I didn’t have to look at society around me to love myself, but damn it all if it doesn’t help. I think about the queers out there in places where there isn’t a strong queer community. I think about the queer kids who skip school so they won’t get their nose broken for wearing boys’ clothes. Society already tells us we are ugly, we are undesirable, we are freaks. Maybe it would help, even a little, if there were butches on those shows. If these butches were normal people, maybe even cool people. If they became more than just stereotypes or things to be feared — real characters with real narratives that viewers empathized with. If Paige’s gradual descent into soft butchdom continues on the righteous path.

A butch can dream.