“‘Good Girls’: Gender, Social Class and Slut Discourse on Campus” is a new study showing that slut-shaming is used between women to reinforce social class. “Good Girls” reminds us that patriarchy is not only a tool for men, but a tool for women with other privileged identities to use against women with marginalized identities. “We are unconvinced that women would engage so enthusiastically in slut discourse with nothing to gain,” write study authors Elizabeth A. Armstrong, Laura T. Hamilton, Elizabeth M. Armstrong, and J. Lotus Seeley.

Researchers wanted to show that the forces of patriarchy are more complex than just men tyrannically presiding over society (not that I’m trying to say they don’t also do that): “Viewing women only as victims of men’s sexual dominance fails to hold women accountable for the roles they play in reproducing social inequalities.” In other words, it’s a little more complex than Ms. Norbury’s analysis: 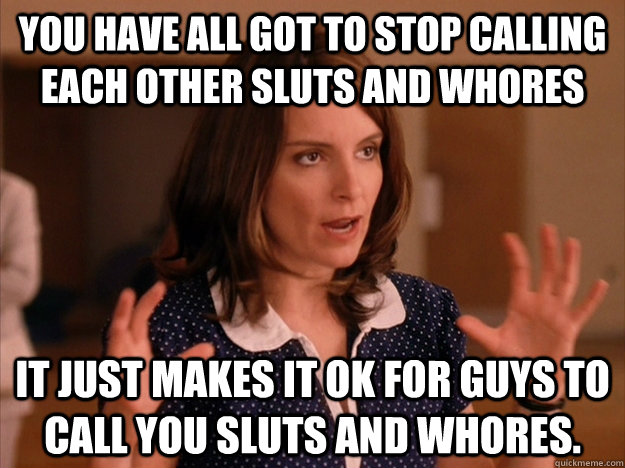 “Good Girls” focused on a group of white women at a midwestern university and the class divides between women within this group. They observed how women used slut-shaming — defined as a set of standards that women continuously reshaped in order to police each other’s sexual activity — across social groups. Women who the study defined as less affluent dismissed the materialism and cliqueyness of women considered to be more affluent, while the more affluent group were dismissive of women less affluent than themselves, calling them “trashy” or being judgmental about the ways they chose to dress and act around men.

The study suggests, “slut discourse enables, rather than constrains, sexual experimentation for the high-status women whose definitions prevail in the dominant social scene.” The “high status” (a category created by the researchers to reflect women from upper and upper-middle class backgrounds that participated in the university party culture and Greek life) women in the study wanted to maintain their status. They did this in two ways. The first was by complying with traditional femininity standards that they expected men to find desirable. The second was by creating an opposing way of showing sexuality — in this case, the “slut” — that they could scorn. The key to the success of slut-shaming is that the definition of “slut” shifts. Typically, the study showed, the characteristics that were defined as “slutty” had nothing to do with a woman’s sex life, and everything to do with the aspects of women’s gender performance that did not fit class markers of the “high status” women. “High status” women generally reported having more sex and more partners than the “low status” group, but were somewhat impervious to being labeled “sluts” because they could still fulfill the classed expectations of their “high status” social group.

Armstrong, who “didn’t expect [their results] to be as depressing as it turned out to be,” and Hamilton hope that their study will help people see that slut-shaming is bullying, and that it has a serious impact on women’s social and economic lives. I think bullying is too simple a label. The less affluent women, who did not enter the Greek system or have the same financial and social capital to fully participate in the school’s party culture left college with fewer new social connections and fewer job prospects. If slut-shaming culture is directly contributing to people not being able to access social and economic opportunities, that’s not bullying — that’s maintaining an oppressive class structure.

The women studied in “Good Girls” were all white, almost entirely straight-identified and all from backgrounds that had allowed them to end up in college. While the authors read into the racialized implications of what a few of their subjects said, they did not directly observe interactions between racial groups. They didn’t gain insight into the experience of non-heterosexual women. The study doesn’t try to explore how slut-shaming and other ways that women police each other creates and maintains broad class and racial divides beyond the scope of the single dorm they studied (and really it can’t, because it’s an academic article in a psych journal).

But while it’s probably good that the researchers aren’t trying to jump to conclusions that they haven’t put the same amount of time and energy into, the media interpretation of the study has generalized slut-shaming that happens amongst these very specific women, and is erasing the way that slut-shaming also plays a hand in oppression based on race and sexual orientation. Slut-shaming culture helps maintain class divides on a much greater scope, and that in particular, slut-shaming contributes to the continued stigmatization of women of color — especially black women — and that results in tons of racist policies like criminalization of sex work and underfunding and cutting welfare programs. The study also doesn’t address how slut-shaming reinforces compulsory heterosexuality and monogamy, which contributes to the stigmatization of queer people and people in non-monogamous relationship configurations.

“Good Girls” also nicely illustrates why it is so important to be vigilant about efforts that claim to be feminist while ignoring intersectionality. Women participating in the marginalization of other women for their individual gain is not a phenomenon limited to slut-shaming. Far from it. There are SO many situations in which women, or people of really any marginalized identity group, stand on the shoulders of others in their group to solidify their own social position. I’m looking at you, women who have achieved corporate success and dispense advice for “all women” while running companies that actively perpetrate and/or are invested in the exploitation of working women. (cough Sheryl Sandberg cough) And you, wealthy gay organizations cheering for the repeal of Don’t Ask, Don’t Tell while ignoring the impact of US military influence on queer people around the world. (cough HRC cough) These examples are a select few amongst the vast numbers who claim to be working for justice or equality, but are willing to throw bigger issues under the bus in order to get quick results and advance within the status quo. 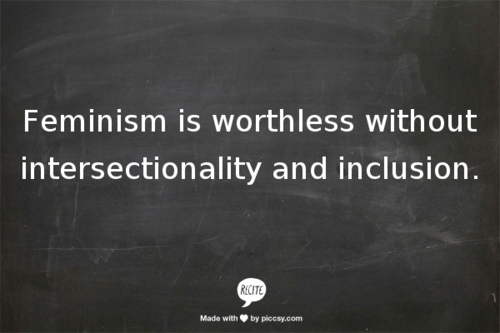 Or as Flavia Dzodan said, MY FEMINISM WILL BE INTERSECTIONAL OR IT WILL BE BULLSHIT.