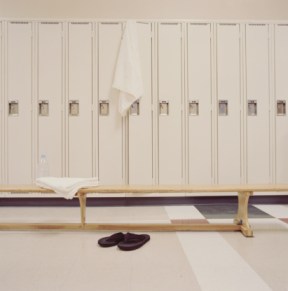 In this Sunday’s New York Times, author and Bard professor Daniel Mendelsohn talks about that thing we don’t really want to talk about — and me, personally, I would have to say that I also do not want to talk about it — how big of a role homophobia could’ve played in the cover-up at Penn State.

I personally don’t want to bring it up because the conversation around homosexuality and pedophilia is LOADED, to say the least. I wrote about this at length last week when a radio host decided to use the Penn State case as a launching pad into discussing the controversy around LGBT people adopting children. Psychologists hold that that pedophiles do not actually possess adult sexuality at all, so the gender of their victims has no link to “gay” or “straight.” Regardless, a group of conservative commentators are already blaming the incident on homosexuality — but I’ll get there in a minute.

First, this column from The New York Times, which acknowledges the national confusion regarding Mike McQueary in the locker room, wondering, as Mendelsohn does:

“How could a grown man have left the scene without taking the child with him? Mr. McQueary wants us to imagine that his brain was racing during those “30 to 45 seconds,” that he “had to make tough impacting quick decisions.” But it seems clear he wasn’t thinking at all — and it’s hard not to wonder why.”

Mendelsohn goes on to suggest that it was partially discomfort about homosexuality, a discomfort which is pervasive throughout professional sports and particularly in football, that stopped McQueary from acting. He also says that most people believe that if a “burly graduate student” had walked in on a “58-year-old man raping a naked little girl in the shower,” he would’ve called the police, tried to rescue the girl, or at least gotten more appropriate advice from his father, who he called immediately after escaping the scene:

Mr. McQueary’s refusal to process the scene he described — his coach having sex with another male — was reflected in the reaction of the university itself, which can only be called denial. You see this in the squeamish treatment of the assaults as a series of inscrutable peccadilloes best discussed — and indulged — behind closed doors. (Penn State’s athletic director subsequently characterized Mr. Sandusky’s alleged act as “horsing around,” a term you suspect he would not have used to describe the rape of a 10-year-old girl.) Denial is there in the treatment of the victims as somehow untouchable, so fully tainted they couldn’t, or shouldn’t, be rescued. For Penn State officials, disgust at the perceived gay element seems to have outweighed the horror of the crimes themselves.

If we all agree that the reaction may have been gender-specific, do we then have to agree that it was sexuality-specific? There’s really no compelling evidence that Sandusky was gay. But maybe to McQueary or the other guys at Penn State, it seemed that way. It was 2002, which in gay-years is a really long time ago, especially for McQueary’s father, who helped Mike make the call to keep what he saw on the DL.

I, probably like you and like Mendelsohn, do believe that McQueary wouldn’t have so easily fled the scene had Sandusky been raping a little girl. Many argue that this is because we see girls as victims but we don’t see boys that way.

But honestly it’s also surprising to me how quickly, and without hesitation, journalists and other human beings have stated this as fact — that a man would absolutely intervene if it’d been a girl there rather than a boy. Because the thing is that since the beginning of time, men have literally stood idly by as women were raped . They’ve watched it happen. Earlier this year in Texas, 18 boys allegedly took turns raping an eleven-year-old girl in an abandoned trailer and, due to many reasons including the horribly racist history of law enforcement in that area, many are both blaming the girl for “dressing provocatively” and supporting the suspects as wrongly accused. In July 2000 at a parade in New York City, not one of the million attendees did anything to stop or report a group of drunk men from stripping and groping 60 women. Date rape often occurs when others are close by and do nothing to stop it. Female victims of rape have never exactly been a class vigorously protected by all who witness their violation.

Anyhow — was the cover-up at least partially motivated by an unease around homosexuality, because “…in a culture that increasingly accepts gay life, organized athletics, from middle school to the professional leagues, is the last redoubt of unapologetic anti-gay sentiment”?

In football, after all, it is gay behavior that gets you called “fag,” not actually being gay. Mendelson says that Sean Avery’s decision to make a pro-gay-marriage PSA earlier this year has made him a subject of ridicule on the New York Rangers.

But Mendelson’s wrong that nobody’s talking about homosexuality, because the other side is. They’re not really concerned about the cover-up and how that happened, or how if a cover-up hadn’t happened then unspeakable violence could have been avoided; their primary focus is using this as an opportunity to spread lies.

“I think the main takeaway from this, and this is what people do not want to focus on, this is what the media does not want any attention drawn to, is that what this illustrates is the truth, it’s a simple stubborn fact, that homosexuals molest children at much higher rates than the heterosexual population. And this is a fact of life that the gay lobby does not want us to know but this illustrates it.”

Joseph Farah of WorldNewsDaily appeared on FoxNews to share these ideas, and also published them on his website which gets over 1.5 million page views a month:

“But now that being accused of homophobia is considered an offense, while practicing homosexuality is considered a virtue, should it really surprise anyone that such behavior would go unreported or unchallenged for so long?

In an age when government schools are actually teaching children how to perform homosexual acts and that there is nothing wrong with them, it would seem that an environment conducive for predators of children is being created under the watchful eye of the state and the media.

Remember also that Penn State is a public university. There is probably no institution more conscious of the new “sin” of homophobia than the American college campus. There are few imaginable offenses more grievous than homophobia in that environment. One pays a price for exhibiting any symptoms of this dread disease – especially in academia.”

If we can agree on the basic fact that pedophilia is an entirely different occurrence than homosexuality, it seems that we can also agree that regardless of whether we think homosexuality is a “sin” or a “virtue” or just “a completely normal thing that a statistically significant number of consenting adults identify as in terms of their relationships with other consenting adults,” the equation of pedophilia with homosexuality isn’t helping. It turns the conversation into one about what we are and aren’t comfortable with when it comes to adult sexuality, and how we feel when confronted with consensual sex choices that are different than our own — and it turns the conversation away from protecting children from violence and persistently, repeatedly violent people. If we believe Mendelson, the preoccupation with homosexuality literally turned McQueary away from a chance to rescue a child who didn’t have anyone else to rely on. Homosexuality has to do with how consenting adults live their lives; pedophilia is a nonconsensal, violent act against children that they have no control over. Are we really so hung up about the former that we’re going to let the latter go on in silence? Or are we ready to finally recognize and respond to pedophilia for what it is — for the sake of the children?