Another week, even more things to watch on your screens! Heather watched Adventure Time: Distant Lands — Obsidian and she’s convinced that they’re giving the gays everything that they asked for. She also watched the new Saved by the Bell and found it to be a loving and queer skewering of the original (Carmen loved it, too!). Drew watched the Euphoria Christmas special and declared it as “a wonderful frustrating Zendaya to tour de force” and she’ll never stop loving Rue and Jules. Never!

Also, Kayla revisited Saving Face with a personal essay so touching that even Alice Wu tweeted about it herself!

Lovely piece by @KaylaKumari on #SavingFace and slow dancing. Not to date myself, but my favorite slow dance jam was "Crazy For You" by Madonna. https://t.co/Z4ZY6c1Bb1

Shocking, given that 2020 lasted for an entire decade, but it’s already the end of the year, and so begins our patented End of the Year Pop Culture Lists — first up is the 5th Annual Autostraddle’s Favorite and Least Favorite Lesbian, Bisexual and Trans TV Characters of 2020. And of course, as a new month has begun Riese once again has brought together all the gay things you can stream with your gay eyes across every platform imaginable. You can thank her later.

+ None of us watch The Conners but Alexandra Billings (whom we all love) is playing Darlene’s boss and this week’s episode talked a bit about trans representation in media, in particular the horrendous famous Ace Ventura scene from the 90s. That’s pretty much all I got — since I didn’t watch — but it is something. — Carmen

+ Hey did y’all know Station 19 was a really good show? JK of course you know that because unlike me you didn’t put off listening to Natalie and Carmen’s Very Good Advice to just WATCH IT ALREADY but anyway I’m here now and I haven’t even gotten to the #Delishop scenes yet and I’m already very invested. — Valerie Anne 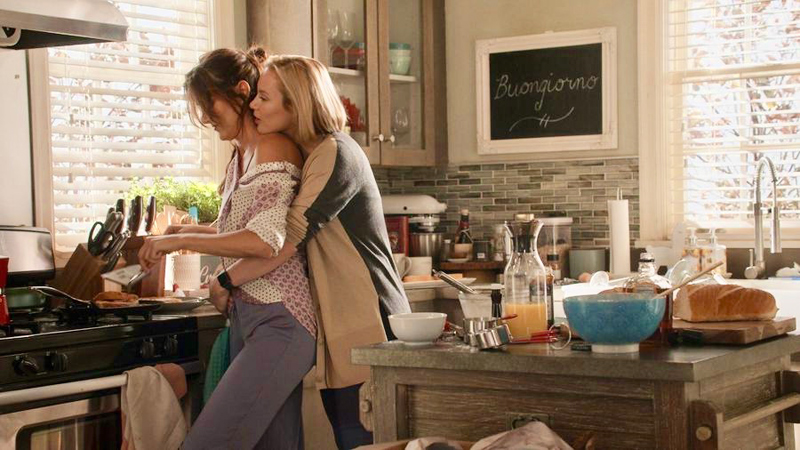 Station 19 opens with gay bliss, Dr. Orgasm — fresh off her years at Grey’s Anatomy — making French Toast in Maya’s kitchen while Captain Bisexual herself creeps up and kisses her on the neck.

(Its perfect and I know I spend a lot of time telling you about how unreal the chemistry is between Danielle Savre and Stefania Spampinato but that’s only because I can barely believe I’m seeing it with my own eyes!!)

The thing about morning French Toast is that it can lead to afternoon anxiety. At least for Maya, who later tells her best friend Andy that she found herself breaking into hives over the breakfast table and Carina’s vagina art on her walls (haha, Dr. Orgasm never change), and her bras drying in the bathroom and to make it worse, Maya doesn’t know who she can even talk to about it. Andy of course says Maya can always call her — but Maya’s not sure, they haven’t been close lately. And if I can step in quickly as the narrator, “lately” definitely means at least over a year, ever since Maya slept with Jack and stepped over Andy for captain.

Without any doubt, what Maya did to Andy was her absolute lowest. It made Captain Bisexual fundamentally unlikeable for a lot of people, and for a long time. Andy and Maya have been owed a proper reconciliation. Here, it lands with a bang.

After a long day that also involves saving four drag queens from an electrical fire (did I mention that this episode is easily the funniest, most gay, and not coincidentally also my favorite episode of Station 19 yet? It was a debut from queer femme writer Zaiver Sinnett — otherwise known as Dr. Perez on Grey’s Anatomy), Andy comes barreling into Maya’s office. She knows they haven’t been OK. The truth is that she’s never forgiven Maya, but you know what else?

Andy knows that Maya is breaking out in hives over French Toast because she was never able to feel safe around the breakfast table growing up with an abusive father. And only Maya would understand that Andy will eat cold green beans out of a can living alone in the fire station rather than admit she’s scared. They’re “dark and messy” — a clever play on on Grey’s infamous “dark and twisty” sisters Meredith and Christina — but they can be dark and messy together. Some relationships are too important to keep holding grudges.

Taking a leap of faith, Maya invites Andy to live with her and Carina to wait out the pandemic. Three’s Company anyone? 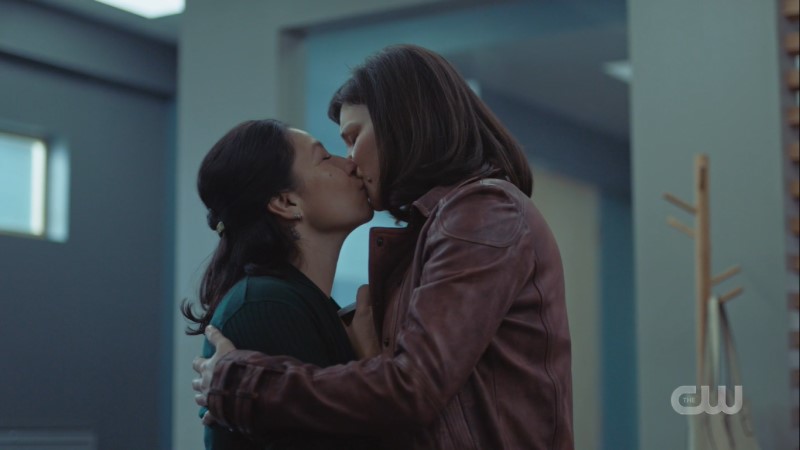 One thing I love about Canadian TV (and there are many things to love about Canadian TV) is that instead of having to hope maybe a queer woman will show up eventually, you can instead assume someone’s queer and it’s only a matter of time until they’re revealed. Coroner is no exception. With creators, writers, and directors with credits that like Rookie Blue, Bomb Girls and Wynonna Earp, it’s honestly no surprise that there are queer people littered throughout Coroner’s two seasons. The show is about Jenny, a smart, kind woman who used to be a doctor but who is now a coroner; she is determined and passionate about her job, and wants to make sure she gives the dead a voice, even if she has to break a few rules to do so. She also has severe anxiety, and it’s portrayed in a way I’ve never seen on TV before.

In her world are many queer folks, including but not limited to her best friend Allison (Tamara Podemski) who was planning on having a baby on her own until she met Sabina (Jeananne Goossen). There’s also a trans woman named River who makes a regular appearance as a morgue attendant (played by trans and two-spirit actress Kiley May), and in season 1 Detective Taylor Kim (Alli Chung) casually mentioned her girlfriend at one point. It also feels worth mentioning (though I wish it wasn’t as notable as it is) that none of these LGBTQ+ characters I’ve mentioned so far are white. Sabina didn’t show up much in Season 2, but Allison remained an important character, and she had a really great episode centered around her First Nation heritage.

The show overall is clever, fast-paced, and balances the procedural nature of a new and fascinating death every week with throughline stories very well. I find myself being surprised when each episode is over because it seems to go by all too fast. The first two seasons are available on the CW now, and the third season is being written as we speak. 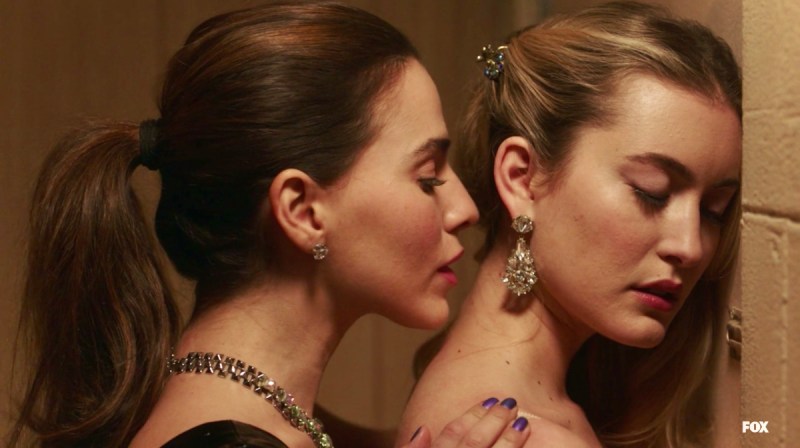 I don’t even know how to describe Filthy Rich — the most delightful, absolutely bonkers, cannot even fathom it soap that I have watched in a long time. I do know that I think it was a mistake for Fox to essentially cancel the series before it even began, first planning it as a “summer burn-off” and then bumped to the fall line up after the coronavirus stripped television bare. If you loved mid-aughts high drama satire soaps like Ugly Betty or Dirty Sexy Money and can stand whatever is happening with Kim Cattrall’s version of a Louisiana accent (I assume that will be harder for the Southerners among us), then I cannot recommend Filthy Rich enough. At ten episodes, its a medium-size binge and primed for these long, dark quarantine nights.

Basically Filthy Rich is about a famous Christian televangelical family with their own television network, and when the patriarch dies in a mysterious plane crash it turns out he had lots of children with women all across the country out of wedlock (not very Christian, if you ask me). So all his extramarital children come to collect their portions of his inheritance, and that’s where the fun begins.

For our needs there is Daisy, the fallen minister’s eldest daughter who grew up with an alcoholic mother in Las Vegas and is a sex worker who runs her own cam girl business. Daisy is hot, and smart, with legit business chops and ruthless. She’ll also stop at nothing to protect the women in her community. There’s also Becky, who is the wife of Daisy’s new brother. Becky’s pregnant with their first child and, raised deeply in the tv church, abhors everything that Daisy stands for. She can’t stop thinking about her, about her hair and the ways she smells and how she saunters into a room… oh wait.

So Becky and Daisy fall for each other hard. Its secretive and sweaty and sexy — all open mouth kisses behind closed doors and fire-hot tension in evil glances shot across the family dinner table. In Becky, Daisy sees someone she can protect and love. In Daisy, Becky finds a strength in herself she never saw before.

I can’t promise you that this clandestine love affair lasts (and the closing [spoiler] that left me in a blood curdling scream at the television is too juicy to ruin), but damn what a ride it was.