A few (fourish) months ago, I went to Bonnaroo 2012 in Tennessee and it was amazing, as all Bonnaroos are. Unlike A-Camp, Bonnaroo has become something I can’t process immediately, if at all. I tend to leave with a serious feeling of sadness and loss, and of never wanting to go back to the Real World, and wishing I’d done some things differently — and not necessarily in a healthy, “let’s live each day to its fullest!” way. So I try to just stuff all those feelings down and get on with life, lest I tumble down a rabbit hole of regret and loathing of reality. At least I know my limits! You’ll notice that this recap (“recap”) of my time at Bonnaroo is hella late and actually not a recap at all. It’s a travel journal and feelings atrium, as the title suggests. Also its ‘lateness’ is an inherent part of its soul, so. 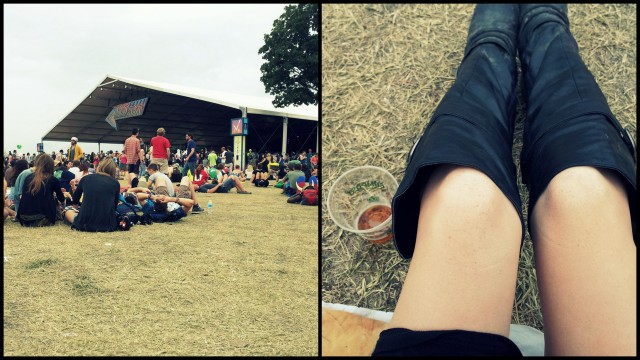 Remember when I said this would be the year of doing all the things I hadn’t done yet?

I tried. I really did. Let’s go through the list quickly before I change my mind and trash this draft.

“All The Things I Haven’t Done Yet” Results

1. Ferris Wheel
I didn’t do the ferris wheel because the lines were so incredibly long, and I had an honest fear of dying (you brush up really close to your own mortality at Bonnaroo, I think because a lot of people are on drugs and dehydrated and you know that someone probably won’t make it out of the weekend alive and basically, even when you’re not on drugs and are drinking a gallon of water an hour, you still find yourself really nervous that the person who won’t make it out might be you. I can think of few things more tragically sad than dying on your first Bonnaroo ferris wheel ride).

2. Comedy Tent / Cinema
I didn’t do the comedy tent because it was always so far away from me and honestly, whatever I was already doing seemed more interesting. Same for the cinema, except I do regret missing Beasts of the Southern Wild. I told myself I could watch that any ol’ time, eventually, but I’d never be able to sit on that patch of grass in that crowd under that sky again, and so I stayed wherever I was. 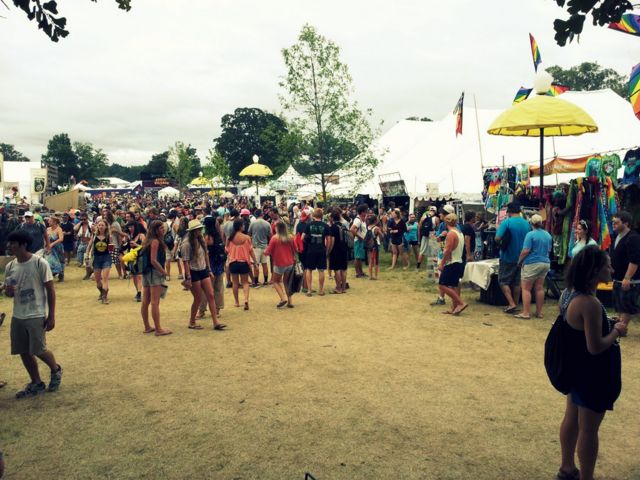 nowhere near the comedy tent or cinema

3. Silent Disco
Real talk: I was never fucked up enough to take part in Silent Disco. This was a game time decision made every time I passed the tent. “Am I even slightly fucked up?” “No.” “Well then, let’s keep walking.”

4. Garnier Salon
I didn’t do the Garnier Salon, but I think I did something much better: an actual shower in a shower stall, using free Garnier products, which I did NOT have to wait in a line for and which was seriously cleansing and totally private. Megan and I had an entire shower trailer to ourselves! Just a couple of sweaty naked lesbians in the woods, covered in soap and dirt and relief. No big deal, world, No big deal. (Best deal.)

5. Walking Around to Other Campsites
I actually did walk around to other campsites! I did this! And I played around with our site’s art pod situation, which was just weird enough at 2am to convince me to grab the most fucking delicious veggie quesadilla that has ever existed on our planet and sorta frightenedly (that’s not a word) speedwalk back to our tent so I could hide and eat and not look at anymore faces. Other people’s campsites were neat. We took lots of mental notes re: how we could improve our own campsite next year. You’d think you wouldn’t want a corner lot, because of the constant traffic and such, but you would be wrong because those assholes had more room than any of us. 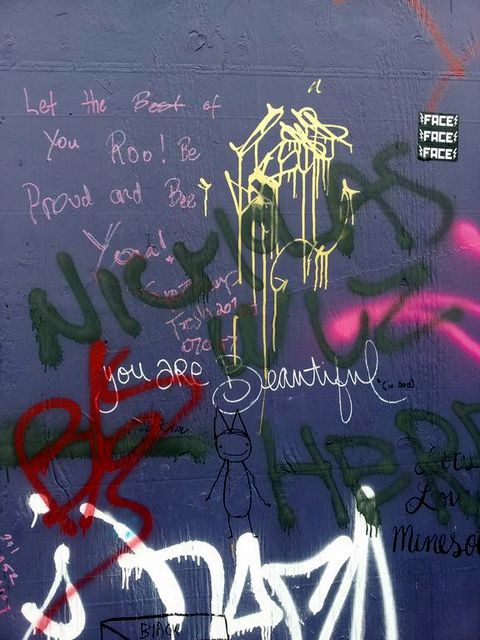 stellar advice: “let the best of you roo! be proud and be you!”

6. The Real Shakedown Street
Looking for ‘the real Shakedown Street’ was so confusing and really fucked with my sense of confidence and self-worth and basic mapping abilities. We were, however, situated very near Bushy Branch, where a vegan shop was set up with the apparent sole intent of pleasing me constantly. The breakfast scramble, in combination with a blended fruit situation, saved my life Saturday morning. So anyway that more than made up for the lack of a legit Shakedown Street, if that’s even its real name.

7. Planet Roo
I did the fuck out of Planet Roo! I was super ONE with Planet Roo. We still hang out sometimes. 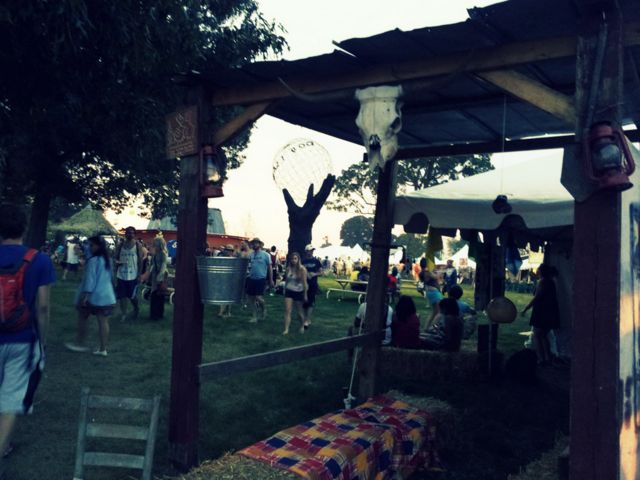 8. Post Office
And I did the Post Office! We sent postcards to ourselves and one or two other people, but we didn’t have enough cash to send one to everyone we wanted, so we did what any normal person would do, which was plan to come back the following day, but fail to actually do so. A handful of people received cute little Bonnaroo postcards with cute little Bonnaroo postage stamps, and a lot of people didn’t, and we’re doing our best to ensure that those two types of people never speak to each other again. The only thing I hate more than hurting someone’s feelings is, apparently, going back to the post office. 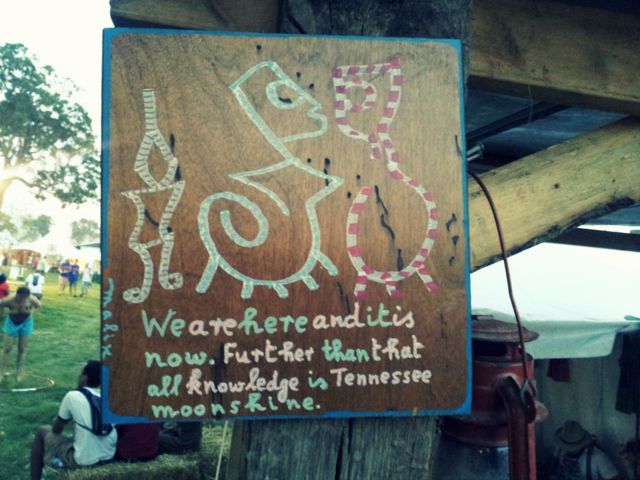 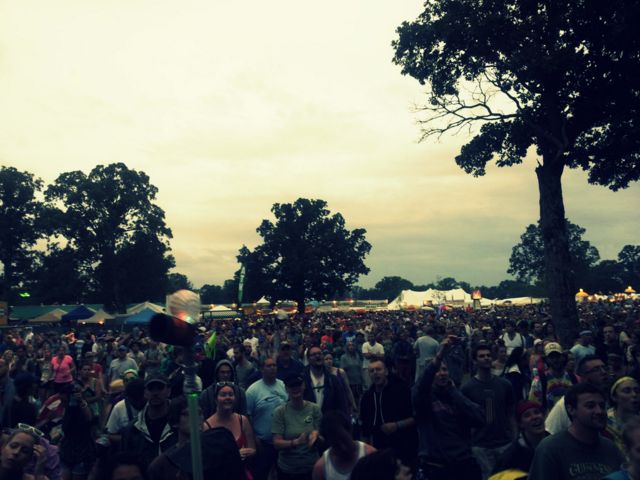 the view from fun.’s set

10. Yoga
I did yoga! And a meditation! I sat on a little blanket near the back of the crowd and we were walked through centering ourselves on the grass, then expanding out to the size of the festival, and then the size of the country, and then the world and all the way into outerspace and back again, so we could feel very large and peaceful and tiny all at once. Then we did some super basic yoga while Megan smoked cigarettes on a big rock or maybe it was a picnic table? It was really fucking fantastic and I’ll be doing this every year. Do all the outdoor yoga! It really changed my life, I’m serious. 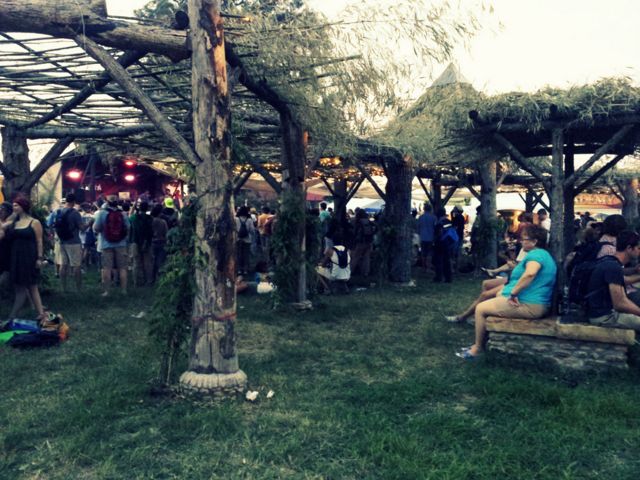 this is not where yoga took place, but it is really pretty

12. Centeroo Fountain
Ok I actually technically did prance through the Centeroo Fountain, and yeah alright it was cool or whatever. I’m really bitter though, because I wasn’t wearing the right clothes and I was really grumpy about not having any food and needing to pee or have sex or drink a beer or SOMETHING ANYTHING, so my fountain experience wasn’t as fun as I wanted. And then I didn’t go back and now I’ll live with this guilt and bitterness for the rest of my life.

13. Meeting You
I MET YOU! I met you and it was The Best. You’re all really fucking awesome! I mean, I knew you would be, but it’s just so nice to be right. We even hung out with Lanie (who would later become a September A-Camper!) for Ludacris and possibly something else — I have a hard time remembering the rest of that day, thanks to Autostraddler Charlotte, who gifted us with a [thing]. And I basically had to partake of the [thing] because you guys, she’d written YOU DO YOU down the side of it! It was a lesson learned, but I don’t regret a thing. 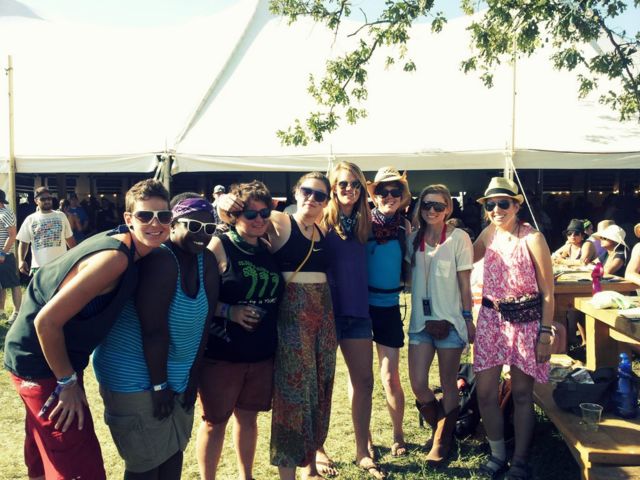 Other Things We Did

1. Sat In A Hammock
I cheated death in the hammocks of death! The death hammocks! (I have a fear of hammocks and I sat in one and I didn’t fall out or break my neck or embarrass myself.) (Ok maybe I was a little embarrassed.) 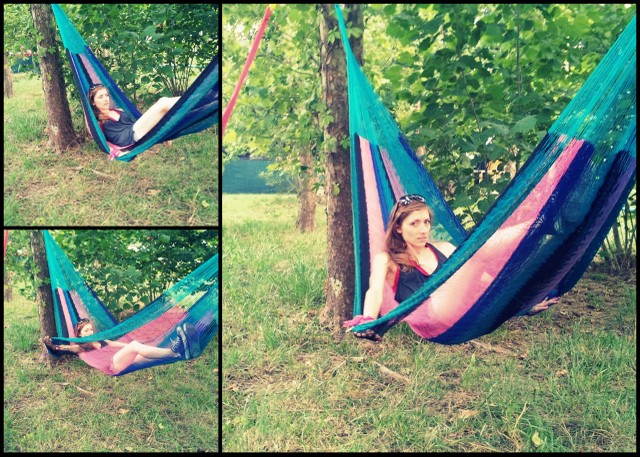 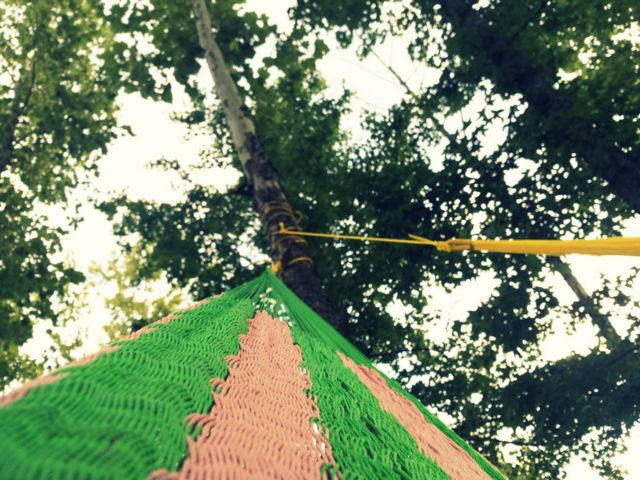 2. Graffiti
Alex made a YOU DO YOU stencil so we could tag the wall around Centeroo, because that’s what one does. It was a lot of fun, actually. We went a step further and doodled all over the walls by What Stage and that was really rewarding. Silver and gold spraypaint is the way to go at Bonnaroo. Maybe everywhere. 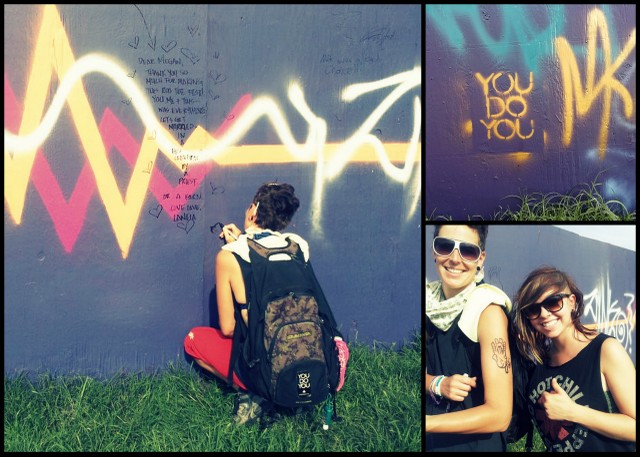 megan doodles, tags a wall and makes a new friend

3. Super Sweet Campsite
Our tent was amazing this year for two reasons: 1) We used a canopy with sides, which gave us enough room for a cot, a table and two coolers. 2) We crafted our own toilet facilities inside the tent using a large bucket, toilet seat, garbage bags and kitty litter. Sidenote, have you ever used a Frog Togg Chilly Pad? Megan’s wearing one here and they are pretty fabulous. 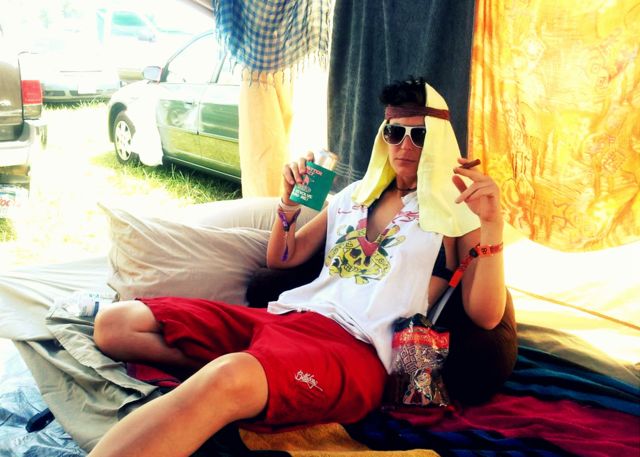 Let me be really real with you: I debated on whether or not to share the secret of our personal restroom/bucket, for obvious reasons, but I’ve ultimately decided that it would go against all that I believe in to keep it from you, as it is truly life-changing and The Best Fucking Idea We’ve Ever Had. Is it a little weird to walk a bag of your own (fully biodegradable!) used kitty litter to the garbage cans? I’m not gonna lie — yes. Yes it is. Is it totally worth it at 3am, 7am, 11am to not have to wait in line at the really disgusting public port-o-potty station, stand in other people’s [everything] while you acrobatically attempt to keep from falling into the Blue Hole of Despair, then leave feeling like you have to bathe in hand sanitizer before you can go on with your life?

You bet your sweet ass it is.

Ok I don’t think we’ve ever been closer, you and I. This is nowhere near Moe’s Ten Days In The Life of A Tampon in terms of serious personal honesty, but I still feel really good about it.

4. Bon Iver
We saw a lot of bands, obviously, and they were all pretty awesome in their own ways (Kenny Rogers was only disappointing to Megan because she had confused him with Kenny Loggins), but Bon Iver at the What Stage on the rainy, chilled out Sunday afternoon was so perfect. 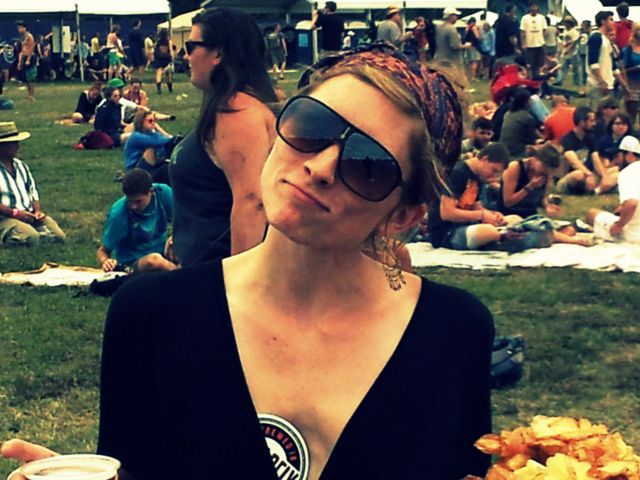 It was actually perfect. Nothing was wrong, nothing was weird, not a single mellow was harshed. Justin Vernon was brilliant and gracious. He played “Blood Bank” and I was right there. I wish he could come to every Bonnaroo forever. 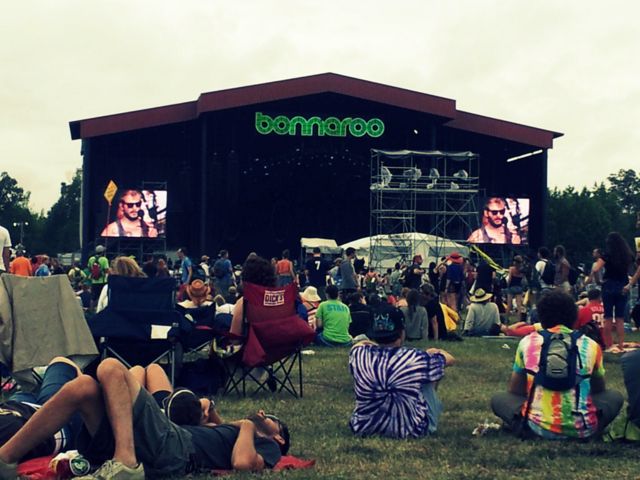 5. Phish
Not being a huge Phish fan, and being extremely exhausted instead, we opted to enjoy Phish from our campsite, which was close enough to Centeroo that we could still hear everything. It was raining and there were fireworks. Megan said it was the best day of her life and I don’t think she was kidding. 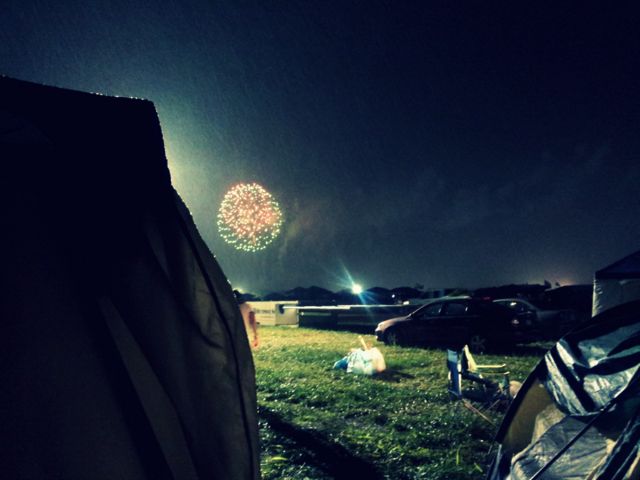 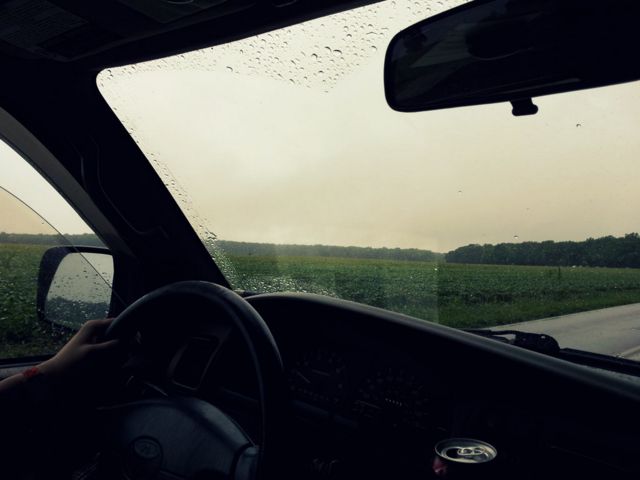 By now I’ve come to terms with the fact that it’s over — that summer is over, and everything that entails — and I’m ready to move on. The real reason I brought this post to you tonight is because Bonnaroo tweeted that their videos from 2012 were being pulled down at midnight, and I didn’t want you to miss them! Take some time to really say goodbye to summer with Dispatch, Bon Iver, Grouplove, City and Colour, and The Alabama Shakes. I’ll leave you with a photo of one of the last things we saw on our way to the airport in Nashville. 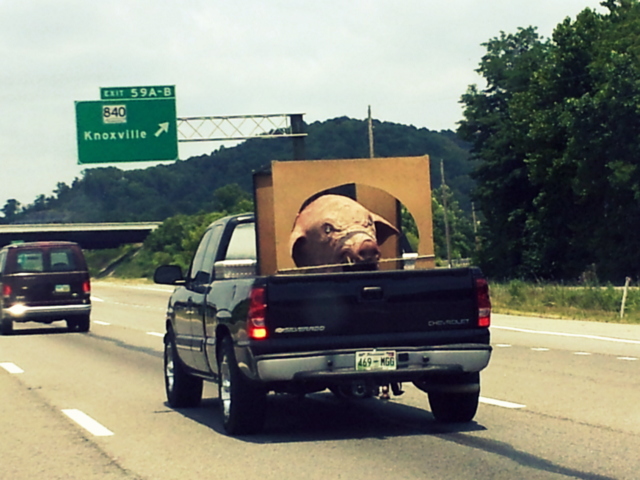 oh tennessee, what a bunch of weirdos. xoxo