Yahoooooo it’s time to go to Tennessee and trounce around a farm for four days! Five, actually. Hi! We’re going to Bonnaroo 2012 June 7-10! Who’s we? Well it’s me and my plucky little mohawked girlfriend, Megan. She’s never been to Bonnaroo before — actually, she’s never been east of Colorado — so we’re all very excited. This year’s headliners include Radiohead, Red Hot Chili Peppers, The Beach Boys, Phish and Bon Iver, but we’ll talk about the bands later. Right now let’s talk about me.

I kept thinking, “What can I possibly say about Bonnaroo that hasn’t already been said?” Because I love it, of course, and I think you weirdos would love it, but what if there was nothing else to really say? That would be a problem because saying stuff about Bonnaroo is like, the point. It’s the reason I go. But I really don’t want to write about Bonnaroo! I just want to be there and I want you to come with me and hang out and eat samosas, make some memories together, you know? Just be. Because there’s so much being to be done on the farm! 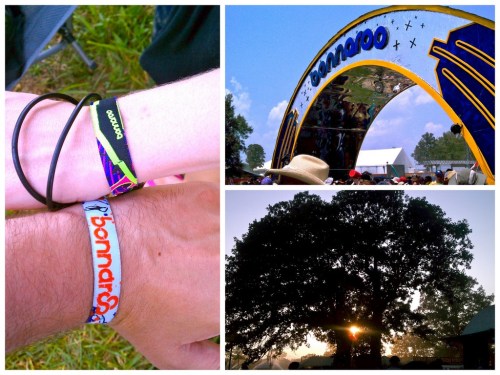 My first year at Bonnaroo was a frantic confusing jumble of heat, maps, music, camera equipment and heat. Also heat. I remember it in bits and pieces. I remember agreeing to climb onto Alan Palomo’s shoulders, only to have a security guard tell us that it wasn’t necessarily a good idea or even allowed, and trying to get Romy Madley Croft to notice/want me, and getting lost a lot. I remember melting into a crowd of about 100,000 while Jay-Z rapped about being young forever. I remember forgetting what it was like to live in civilization.

The second year was when I thought I knew what I was doing. I packed better, and less. I watched Hesta Prynn dance in cut-offs/make my dreams come true. I let my heart tumble out onto the grass during Arcade Fire. Sarah and I explored the world behind the media compound and main stage, and watched flickering blinky lights float to earth on the other side of the chain fence, too far away to grab one. I was jealous for a second until I just gave in and fell in love with all of the people I couldn’t be.

I usually just gloss over the times when I couldn’t move, or when I cried because I didn’t want another sweaty naked shoulder to touch mine.

But while I was recounting my tales to Megan in an effort to get her really excited and prepared for the festival, she had other questions. What was the Art Academy like? How does the Silent Disco work? Did people take yoga mats or towels? How do you get into the Comedy Tent? Why on earth had I left early on Sunday both years? WAIT THERE’S AN INFLATABLE WATER SLIDE??!

And that’s when I realized, you guys, that even though I thought I’d learned so much from the first year — not to pack a ton of food, that it wasn’t really just about the music, prints not solids, etc. — I’d still been missing out on so many things! Voluntarily! So obviously I had my answer re: what to write about. In addition to just chilling out and loving life, this year I’ll be doing (almost) everything I haven’t done yet, which will probably be a lot like going to Bonnaroo for the first time, which is to say that this year is going to KICK ASS.

All The Things I Haven’t Done Yet 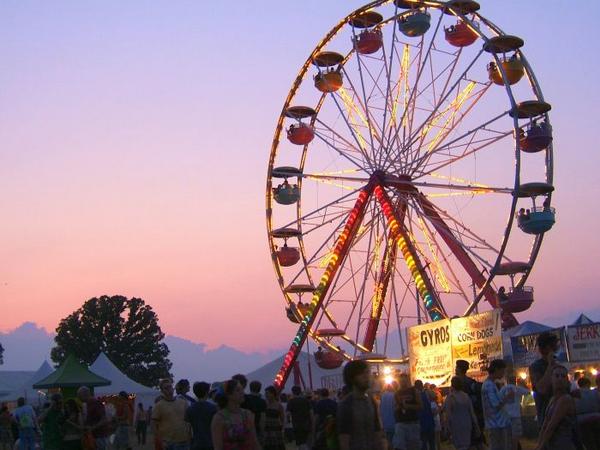 The line at the ferris wheel pales only in comparison to the line at the entrance of Centeroo. It’s covered in trippy lights and apparently runs nonstop all weekend. We have mixed feelings about this one.

Megan: I would much rather go sky diving than go on a ferris wheel.
Laneia: Sky diving isn’t an option though. I’ll probably just fall out of it. It’ll be like that guy in The Notebook.
Megan: I don’t know why we have to do something that we both don’t want to do.
Laneia: That’s the point!
Megan: Let’s go walk into a fly net! Because that’s just what people do at Bonnaroo!
Laneia: I don’t even know what a fly net is. 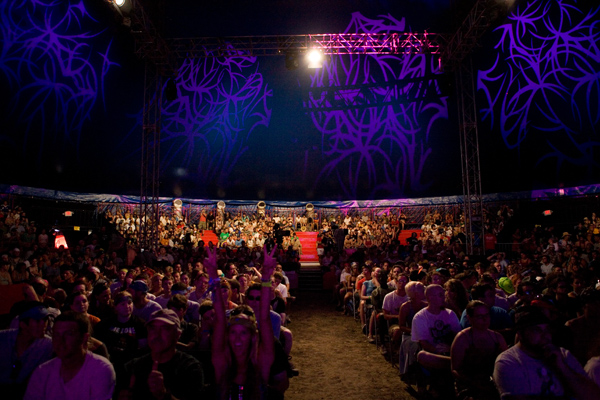 via you ain't no picasso

There’s air conditioning! And funny people. Aziz Ansari, Reggie Watts, Amy Schumer, Ali Wong and a large selection of white men, like Brian Posehn, will all be there. There is the issue of securing a ticket in advance, so we’ll see how this goes. Also Ali Wong is really hot. 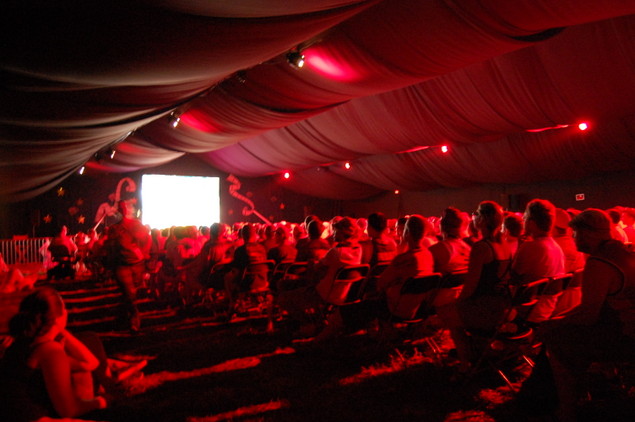 Again with the long lines. And it’s like, 80 miles over at the edge of Centeroo. But this year there’ll be an advanced screening of Beasts Of The Southern Wild, which looks fucking amazing, and! And! Autostraddle’s favorite, tUnE-yArDs, along with Ava Mendoza, will be performing a live score to Buster Keaton shorts! 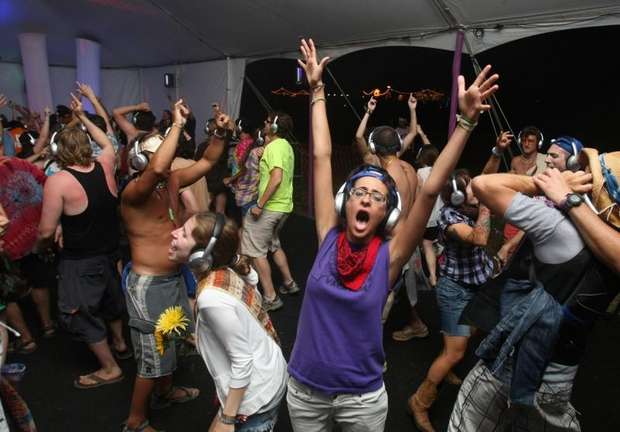 Ugh I feel really self-conscious about dancing and so does Megan (we are potatoes), but Bonnaroo is not the place to indulge self-consciousness, so FUCK THAT. I’m putting on some headphones and pretending I look this way on purpose. K Flay has a set on Thursday at 9:30 and Friday at 4:00! 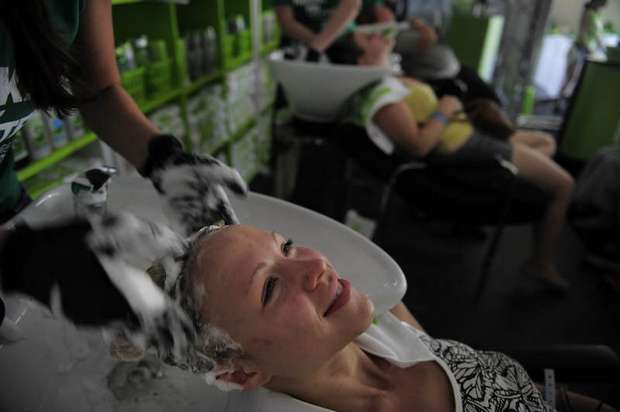 I was always put off by the lines, again. But it’s a free hair wash! By probably really attractive women! In air conditioning! Free samples! Doin’ it.

6. Walking Around to Other Campsites

The ‘walking’ part is the only deterrent here, and honestly it had never even occurred to me that I should visit other sides of the farm, but I bet I could meet some neat people and pick up a few ideas for next year’s tent. Also how else will I ever find the real Shakedown Street?

this is not the real shakedown street via moetrainstracks.com

The stuff of legends. Usually I don’t give a shit about legends, but this feels important. Basically it’s a row of unauthorized vendors — the weirdest/best of all the weirdos — selling things like $1 grilled cheeses, handmade clothes, glass and other random wares. Because it’s unauthorized and probably riddled with illegal substances of every persuasion, this festival mainstay is set up in a new place each year. There are other rows of vendors throughout the farm, but they’re not The Shakedown Street. You see why this is important. Apparently it’s a sketchy place after dark, so this is a daytime-type bear hunt.

Is this even a real thing?? I don’t know! That’s why it’s called a legend. 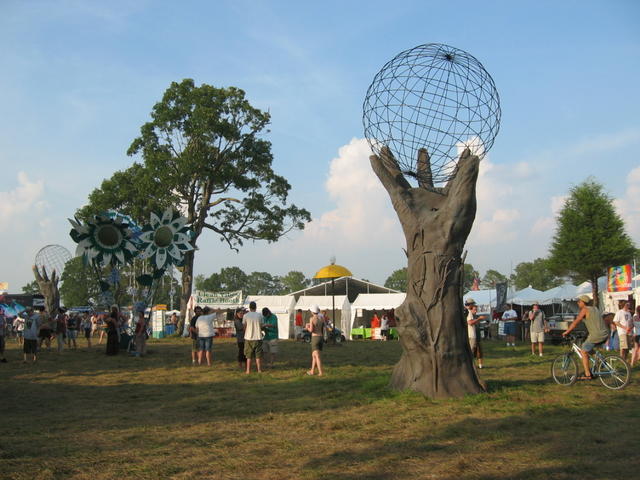 Lots of stuff going on at Planet Roo, which is a space I don’t even think I’ve seen. Is there collaging? Straw hut-making? Screen-printing? I don’t know! Probably! Maybe I’ll learn something new. Maybe I will draw a pony or sign up for the Peace Corps. 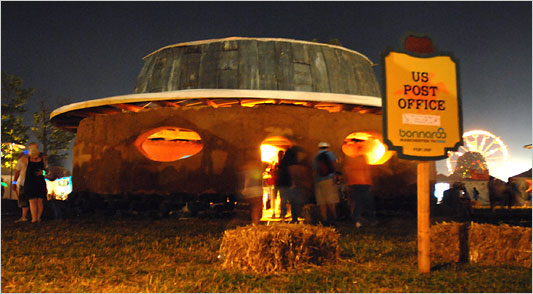 Also at Planet Roo! Bonnaroo has its own postmark for crying out loud. Skipping the post office is always one of my biggest regrets. 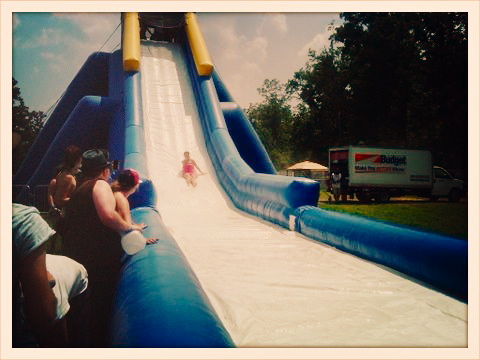 I can’t swim, so this seems much safer than diving into a river via rope swing, and maybe not as crowded as a water park, so sure, I’ll go on the water slide. 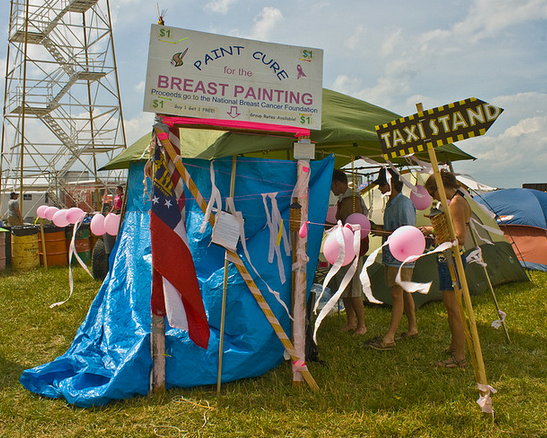 Even though part of me really does want to be topless in public, I still don’t think I can do this. Like, maybe if it was an all-girl breast painting troupe, and it was conducted inside a silk-lined tent, with parrots and grapes and iced coffee — maybe then I’d go for it. 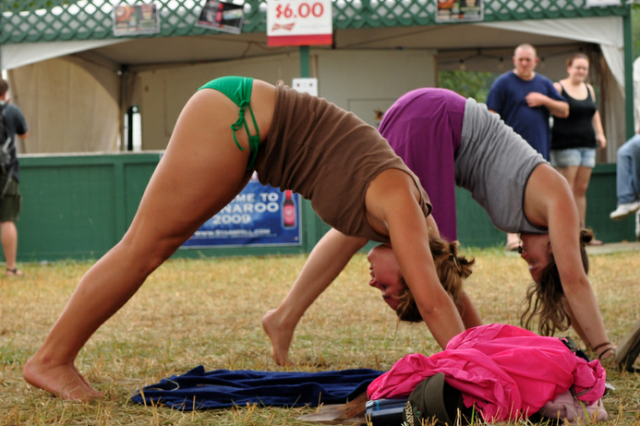 This is right up there with the post office in terms of regrets. I have anxieties about doing yoga in public spaces (I realize this stands in contrast to the aforementioned desire to be topless, but that’s because humans are complex creatures), so I usually just chicken out. LOSER. Not being a loser this year. Not chickening out.

Clean Vibes is an incentive program that involves turning in large bags of recyclables or used clothing, and receiving points that can be used to get neat things, like probably frisbees and hacky sacks. I always do my part by collecting the trash and recyclables from our camp, but I’ve never actually gone to the trouble of turning them in for prizes. I love prizes! What the hell’s wrong with me? 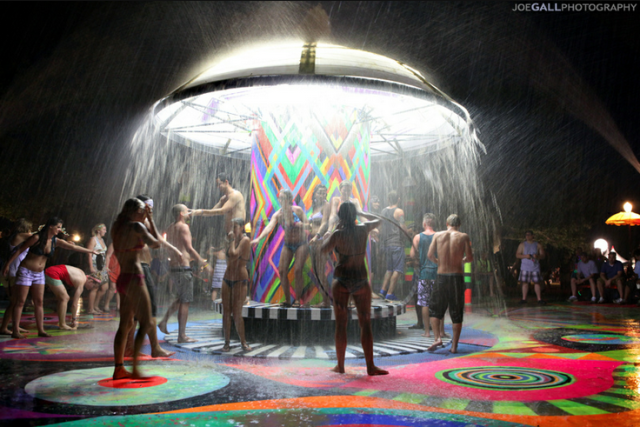 So there’s this fountain, right? And it’s big and water’s everywhere. And it’s crawling with people. And the first year I went, someone told me a horror story about the water not being cleaned or something, so I’ve been terrified of it ever since. Well no more! No more will I live in fear of the fountain at Centeroo!

But if I come back with some sort of waterborne disease, I’m gonna be pretty upset.

We’ve made some half-hearted efforts to organize meetings with AS readers at Bonnaroo, but between the crammed schedule and the fact that I’m a total dork, it just never has worked out. This year’s different!

We’ll be at Broo’ers Village around 4:30 on Friday — that’s after Two Door Cinema Club and before the Avett Brothers. Let the spirit of A-Camp inspire you and just show up! You don’t need to worry about being too something or not enough anything — I’d just really like to say hi! We’re gonna get some drinks and foods, so it’s a pretty low-key situation. Bring some spray paint for Centeroo wall art (we’ll have stencils). If you’d like to suggest a different time or just want to unofficially RSVP, let me know in the comments!

Have you managed to make it to any of the things on the list? You should tell me about them! Are you going to Bonnaroo this year? ARE YOU SO EXCITED?? Or if you want, we can talk about your favorite festival foods. How do you feel about alligator tail?