Mattel has an elaborate bullpen of “I Can Be” Barbie dolls dressed for careers as various as “Pet Vet” to “Fashion Designer” and, thanks to a new partnership between Mattel and Girl Scouts USA, Barbie has a new image, a new Girl Scout doll and a new tagline: “Barbie: Be Anything. Do Everything.” The partnership includes the creation of a new “For Girls” wing of the Girl Scouts USA website that offers an interactive quiz to teach viewers about what kinds of accessories go with what kinds of careers, and a Barbie career activity booklet that shows pictures of real women firefighters, teachers, and marine biologists. So has the age of progressive Barbie truly arrived?

As you might have guessed, the career dolls and interactive website still promote a very narrow sense of what it means to be a woman in the workplace providing only 20 options of career and focusing, of course, on what one would wear to this given career. In short, it’s not about what kind of life and opportunities a given career offers, it’s how cute you look in the costume of that career. In the site’s interactive quiz you are allowed to choose one of only three avatars with the same outfit to represent yourself in the career game — Barbie (long blond hair, fair skin), Teresa (long light brown hair, olive skin) and Nikki (long black hair, slightly darker skin.) In direct contrast to the rest of the Girl Scouts site, and even the Barbie “I Can Be” booklet, which shows some masculine-of-center women and non-thin women and women of color at their actual jobs doing actual work, this Barbie quiz allows viewers to choose between only three types of girlness, which are all wearing the same body and the same white-shirt, tight jean capris, pink wedge sandals. In short, actually only one type. 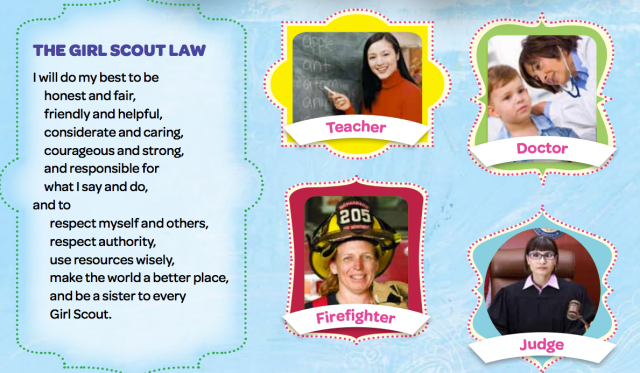 But here’s the thing: the Barbie brand will probably exist until the end of the world and be a little f*cked up, but it’s Girl Scouts USA that’s the disappointment here. This new partnership with Barbie, and the creation of the “For Girls” section of the Girl Scouts site makes a clear connection between girlness and a narrow, appearance-centered, superficial approach to career. This kind of Barbied-up world view is “for girls,” this new site says, thus girls are for it.

This kind of one type fits all approach to girlness and using the word “girl” to mean a second class or appearance-focused approach to life isn’t new, but it’s all the more troubling because it’s happening at the same time as other major brands take real strides to break it down. The Always #Like a Girl campaign has received lots of snaps in this department, for its video exploring why we use “like a girl” as an insult to describe the way female bodies do physical tasks like run, throw, and punch.

By creating this “For Girls” section of their site and featuring the Barbie products, the Girl Scouts have made a dramatic shift in their branding and in the language they use to describe their girls, which up until now has been pretty conscious of making the “girl” in Girl Scouts mean a lot of different things. In 2012, a trans girl joined a Colorado troop despite widespread opposition and the Girl Scouts promotes outdoor adventure as well as leadership skills and social change work. According to a 2012 national study of fourth through eighth grade Girl Scouts, “When girls get outdoors on a monthly basis in Girl Scouts, doing even casual outdoor activities, they are much more likely to agree that they’ve learned to recognize their strengths, to do something they thought they couldn’t do, and to gain skills that will help them do better in school.” 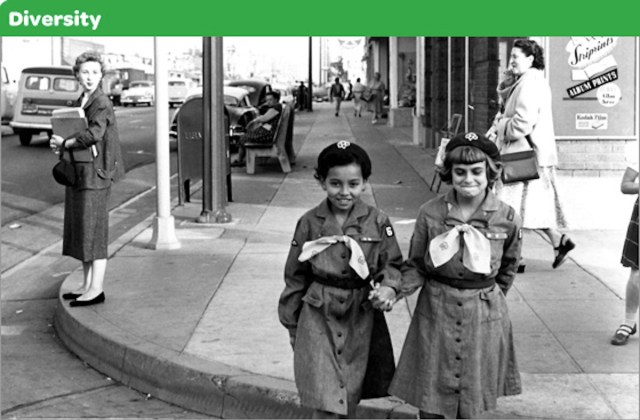 As we know, the language we use to make connections between people and concepts matters, and the Girl Scouts have taken a big leap backwards in the conversation about how to make the word “girl” inclusive and strong and how to separate toys from assumptions about who should play with those toys if they want to be “like a girl.”

Emma Copley Eisenberg is a writer of fiction, creative nonfiction, and journalism. She is finishing an MFA from the University of Virginia, where she serves as the nonfiction editor of Meridian. Her prose has appeared in Gulf Coast, The Rumpus, Cutbank, Philadelphia Weekly, Five Chapters, TruthOut, Terrain, Wonderful West Virginia and elsewhere, and she was the winter 2013 nonfiction winner of Narrative's 30Below contest. She believes the most exciting art is urgent art, and explores questions of transformation, gender, and queerness in her work. She has traveled cross-country living and writing out of a Toyota Tacoma pickup, and served as an AmeriCorps VISTA in southeastern West Virginia where she taught creative and academic writing to young women. She is currently at work on a collection of linked short fiction about queer ladies in Philadelphia and an interdisciplinary language project creating new queer taxonomies.

Emma has written 2 articles for us.