It’s an exciting day for people across the Greater Boston region and Massachusetts – except for its LGBT citizens, apparently. Because even in the first state to gain marriage equality, there’s still discrimination, and one is in the city’s annual parade.

According to an editorial about the parade published in the University of Massachusetts’s Daily Collegian, the St. Patrick’s Day Parade has denied queer groups entry to the parade since they first petitioned in 1992. At that time, it was a group called GLIB – the Irish American Gay, Lesbian and Bisexual Group of Boston. Though the St. Patrick’s Day Parade is often seen as a city event, because it has been organized by a private organization – The Allied War Veterans Council (AWVC) – the organization doesn’t have to abide by Massachusetts or Boston government’s standards about discrimination.

Similar to what happened with the Boy Scouts of America a few years later, this “right” was decided by a 1995 case, Hurley v. Irish American Gay, Lesbian, and Bisexual Group of Boston, that made it all the way to the U.S. Supreme Court. Daily Collegian writer Allie Connell writes:

The public accommodations law prohibits “any distinction, discrimination or restriction on account of… sexual orientation… relative to the admission of any person to, or treatment in any place of public accommodation, resort or amusement.” This law remained the lynchpin in both the state and Supreme Court trials because the parade was designated a public event. However, in the 1995 Hurley v. GLIB Supreme Court ruling, the parade was designated a private event, run by a private organization that had the First Amendment right promote only the messages they wanted. Parades are a form of expression in the sense that they are marchers who are making a shared point. Though not all members of the parade might agree with the AWVC on its stance towards LGBT participation in the community, they are armed with the First Amendment right to take that stance with their parade.

As such, since the city can’t do much to regulate who AWVC does and doesn’t allow in their parade, pro-LGBT Bostonians have found their own solution: organize another parade that does allow those groups in it. The Veterans for Peace organized the “St. Patrick’s Day Peace Parade” after they, too, were denied the right to march in the official parade. The 2013 Peace Parade will be the third annual event organized by the group, who have welcomed LGBT groups with open arms. In 2012, according to a notice posted in January on Occupy Boston, they had nearly 2,000 people, including “two bands, bag pipers, drummers, a Duck Boat, two trollies etc.” The Peace Parade is specifically designed to “end the last vestige of institutionalized exclusion, prejudice, bigotry, and homophobia and make this parade inclusive and welcoming to all and bring the message of peace to South Boston on St. Patrick’s Day.”

An article from last year in the Boston Phoenix called “St. Patrick’s Day v. Gays” also discusses some protests from LGBT groups and supporters that occurred leading up to and during the previous parade. “Near the Broadway MBTA stop, a group of men were waving rainbow banners. Around the corner, a man wearing a pink wig was holding a sign that said ‘Transgender Takeover.'” [Ed note: gendering occurred in context of original printing and may not be accurate.] They note that as South Boston becomes a more popular neighborhood with gay male couples, the parade’s anti-gay standards – they have since denied requests to participate from other, even-higher-profile LGBT groups like MassEquality and Join the Impact – seem more and more out of place, and protests should be even more expected. 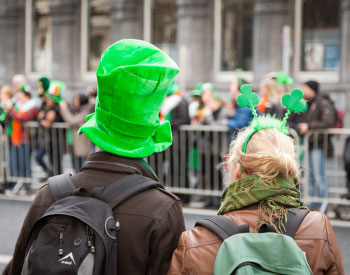 One question that doesn’t seem to have been addressed here is the Why?. Why does the AWVC feels the need to discriminate against LGBT groups? Why do they feel that they’re inappropriate for the parade? A commenter on the Phoenix piece writes that “St. Patrick’s Day is Catholic holiday. Catholicism is morally opposed to homosexuality, so it wouldn’t make sense to include a homosexual advocacy group in the parade.” This rings a bit hollow, though, for a holiday that has taken up the kind of cultural clout in the United States that St. Patrick’s Day has, particularly among Irish-Americans – not all of whom are practicing Catholics, even if many are at least somewhat culturally Catholic. And in Boston, as explained above, the parade celebrates two holidays. Evacuation Day has nothing to do with ethnicity or faith, and so any celebrations of it should ideally be open to all Bostonians.

Yet, until things change, Bostonians can do their best to let the organizers of the official St. Patrick’s Day Parade know how much their exclusion is no longer representative of the ideals of the city, with the aforementioned protests and the St. Patrick’s Day Peace Parade. As Connell writes, “By simply seeing a second parade, which has gained participants over the past two years, follow the first parade brings into question the reason why two parades are needed at all. It is then up to the public and those who support LGBT groups to promote the peace parade rather than the AWVC’s. We, as a country, cannot attack private groups for holding certain beliefs but instead we must rally behind groups that help eliminate bigotry and exclusion.”