A few days ago, Tumblr users started going crazy as they realized the site had begun hiding from searches blogs and tags flagged as NSFW or “adult.” Included in those flags? Tags like “gay,” “lesbian,” “bisexual,” and other words that could be, depending on your audience and intention, harmless posts about a local GSA meeting or hardcore porn. Although Tumblr’s settings page allows users to opt out of hiding NSFW posts in searches, it seems blogs that have been labeled NSFW (with or without their consent) have not been appearing in searches at all, basically blocking them from gaining new followers through anything but reblogs and word-of-mouth. In addition, many noticed that a whole host of vaguely “adult” tags, including those listed above, are now unsearchable on some mobile apps, including Tumblr for iPhone.

The outcry was enough to get the attention of Tumblr CEO David Karp, who addressed the situation this morning in a post on the company’s staff blog. From Karp’s post, it seems that things aren’t as bad as some people feared. Apparently, the disappearance of blogs tagged as NSFW from Tumblr’s internal search was a bug and has been fixed. The disabling of certain tag searches on mobile apps is not a bug, but a supposed temporary fix until they find a way to keep porn from showing up on services that have their own rules prohibiting that. (Thanks, Apple!) Finally, the confusing new “adult” distinction users were seeing as an opt-in label in their settings has been removed, meaning blogs can only be marked as “NSFW” and blocked only from internal searches in “Safe Mode.” According to Karp, NSFW blogs will still appear in third-party search engines. 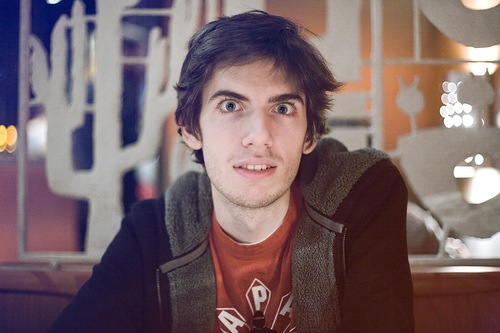 “Lesbians can be very dangerous. It’s the testosterone.”
via Tumblr

That said, it’s become increasingly clear that Tumblr, particularly since its acquisition by Yahoo! earlier this year, is concerned about its use for posting adult content. It’s not just the “spammy commercial sites” Karp names in his post that are at risk, but any blog that wants to post things better suited to the 18+ crowd. And while the filtering and labeling of adult content is important for all users — whether they want to find that content or avoid it — the situation is particularly tricky for queer bloggers, for whom tags like “gay” are often totally appropriate and SFW. Even more unsettling is the ability of Tumblr staff to label a blog NSFW without any notification, meaning someone could be labeled NSFW and blocked from searches with no warning and no way guaranteed way to reverse the decision.

“Queers spend a lot of their life attempting to be seen as more than just a sexual preference, as fully formed people who aren’t a kink or a fetish, so the fact that we were a consideration while dealing with buzzwords is offensive,” says Bo Abeille, who runs Pussy les Queer, a blog featuring “explicit, fetishistic, and sexual images that [Abeille and her girlfriend, Tumblr user suicideblonde] enjoy.”

There is no part of this logo that is not something I would want to find on Tumblr.
banner by Molly Crabapple

Pussy les Queer is a type of blog uniquely threatened by this new crackdown on Tumblr content. While it includes plenty of adult material, the purpose is not to provide a porn cache but to highlight the work of artists who deal in explicit themes. Run by one of the more popular lesbian couples on Tumblr — their personal blogs, bohemea and suicideblonde, were formerly featured in the site’s LGBTQ directory page — it’s an extension of two major voices of the site’s lesbian community. Abeille, whose personal blog was deleted last month over copyright complaints, is working on moving Pussy les Queer to another platform, particularly after the most recent round of censorship frustrations. She has already started a new off-Tumblr site, Les Beehive, but says she’s disappointed that she has to leave:

“In my case, I was a promoter, someone whose Tumblr was mostly dedicated to promoting artists, and also to turning people on to film, media, culture, etc, and isn’t that a kind of blog that Tumblr would want as well? Don’t they also want user loyalty? Shouldn’t I have been considered an important part of their community? But I’m not, and the LGBTQ users aren’t, and the NSFW artists aren’t.”

Surely other popular queer Tumblrs are considering leaving the site, and for people like me, for whom Tumblr has been an important tool of self-discovery and socializing with other LGBTQ people, that loss will be sorely felt.

Those of us who are left have been asked to use the moderated “LGBTQ,” which could force those who don’t like or use that label to accept it as the only way their posts will get exposure. It cripples any subset of the acronym, making it that much harder for queer communities to break down the stereotypes that made “lesbian” synonymous with “hardcore girl-on-girl” in the first place.

Seeing as Tumblr is known particularly for its ability to foster strong communities, it seems counterintuitive to disable some of the most important tools for growing those communities. And with all the lip service queers give to Tumblr, one would think we might get some sort of advanced notice that our tags would be taken away. Instead, we’ve been left to ask questions in the aftermath, meaning many tempers have flared and conclusions been jumped to before Tumblr took the time to tell us what was happening. 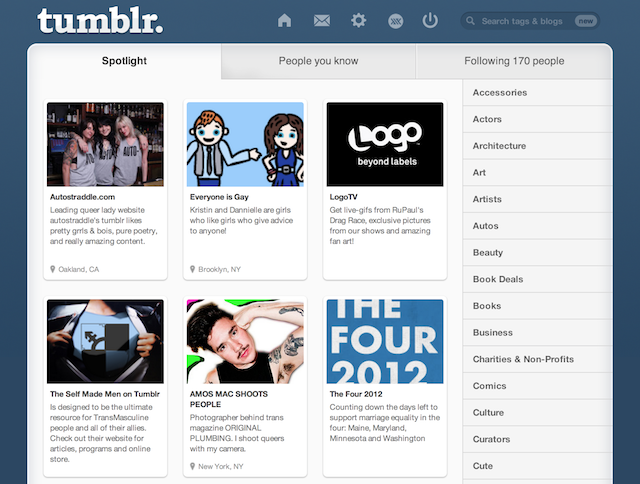 Things like the LGBTQ spotlight page, which is run by Tumblr staff, and the similarly moderated #LGBTQ will remain on the site.
via Tumblr spotlight

There’s no reason that Tumblr can’t get its shit together quickly on this one. The possible solutions to this problem are basically endless, and a quick scroll through the “tumblr censorship” tag on the site will show dozens of workable suggestions from users.

“Wouldn’t it be great if Tumblr users could flag their content themselves?” Abeille asks — and that’s precisely the point. Does Tumblr not trust its users, who frequently dedicate themselves to strengthening communities for everything from fandoms to social justice, to apply that same dedication to flagging content? Can we not be counted on to improve the site we value so much? And, most importantly, can we not count on Tumblr to value each of us in return?