Did you watch Season 2 of The Voice?

Yeah. Absolutely. I went to some of the tapings, too, and got to perform “Come Along.”

What was your take on the whole Christina / Tony Lucca controversy? Did he pull her hair in The Mickey Mouse Club and she’s still pissed at him?

I will go with you on that. Maybe she liked him when they were younger and he wouldn’t give her the time of day. Those are things that as we grow older and evolve into mature adults…when you see somebody that broke your heart or did something rude to you when you were younger it always still hurts. It always does. “Oh yeah, you didn’t call me back.” Who knows, maybe he didn’t call her back.

It was a little strange when Christina went after him saying he was disrespecting women when he performed the country version of “99 Problems.”

Honestly, I didn’t see that performance. I mean it’s a song. What’s cool about The Voice is you got to know these people. You got to see them their families and their kids and clearly he’s a good family guy. And I met him, you know. He’s a really sweet guy. So it was just a song. It wasn’t him trying to be an asshole. 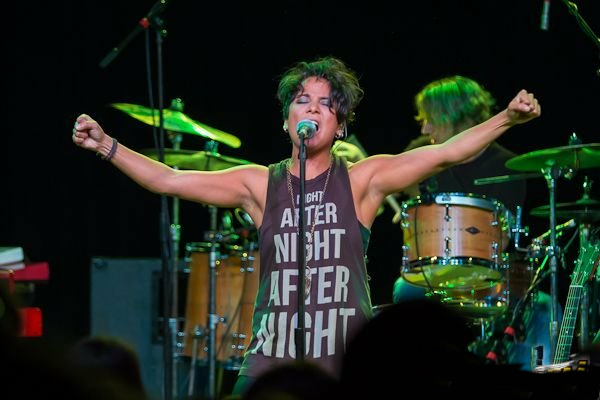 You had said that you were considering presenting “Come Along” to the Obama Campaign. What’s the meaning behind the song?

I’d love to let Obama use it in his campaign but I have no idea how to do that! For me it’s a song with meaning and I don’t want to tell people what to use it for, but really for me it’s telling people who are sitting on the couch letting everybody else make decisions for them to get up and start making their own decisions. That is what that song comes for me and I think it would be perfect for an Obama campaign. Like, get up and make a choice, whatever it is.

What are your thoughts on the upcoming election?

I’m scared, but, of course, I would love Obama to get some more time to do some things that I’ve very sure he wants to do.

Would share your coming out story with our readers?

Sure… Basically it started with me actually at church and they were talking about living with secrets and how bad that is for a person. Then they were talking about heaven and hell and all this kind of shit. I had already been debating when I was going to tell my family.  Literally after that evening on the way home I told my parents that I had a secret that was making me sick inside and that I needed to let it out. And that’s what it was.

Wow. And how did your mom react?

My mom went along with my dad but she would secretly pay for my allergy medicine and my contacts because I couldn’t afford it. And she would meet up with me secretly and buy me a new toothbrush and all those kind of little things. She would put little packages together for me to have. When my mom and I had some real talks about it she even said her heart broke when my dad kicked me out.

Yeah. I agreed with my father just saying don’t give up your whole life right now for a teenage relationship. Let yourself grow up a little bit more. I don’t disagree with him on that. I’m saying the same thing to my niece right now who’s graduating from high school talking about wanting to get married. [laughs] She’s the same as me. But as you know, in those years after high school you figure yourself out. I don’t know what I would be if was married to my first relationship.

Is it true that you are engaged?

No,  I’m not engaged anymore…. It didn’t work out.

I’m sorry to hear that. So you’re single right now.

That’s OK. I’m dating, but I’m not as crazy official as I was in my last relationship.

How is it dating now that you have this level of fame?

I’m sticking to people who don’t know me from the show. Right when I got off the show everybody wanted to be my friend and I could see right through all of that so I’m pretty good about picking people out and knowing who’s basing their friendship or relationship with me on one thing.

Do you have a favorite lesbian movie or TV show?

Well, the first movie that gave me that tingle [laughs] was definitely Gia.  That was the first one. I was younger and I was like “Ah. For some reason I feel weird when I watch this. And I have to lock my door so my mom doesn’t come in.” [laughs] I’d go with that.

Do you watch The Real L Word, the reality show?

Yeah. [laughs]  I just watched a couple of episodes. My friend, Jaq, was on…I forget the episode…I guess she worked with the girl with dreadlocks so she was in a couple of the episodes with her.

What did you think of the show?

Well, I liked it. I would have watched more if I wasn’t just watching the ones that she was on, but I like The L Word so watching The Real L Word was cool. I wonder if some of that drama is sometimes fabricated, but according to Jaq it’s not. So that was pretty interesting.  I’m like wow, I’m not that dramatic with my friends.