I sat down this week to watch the second season of the Saved by the Bell reboot, with the promise of a super sweet bisexual teen storyline, fully expecting it to be a light, fluffy thing.

I watched the original SBTB every day after school all through my very 90s childhood, I’ve seen it when they go to college, when they worked at a resort in Hawaii, the one last TV movie when they went to Vegas and got married. And everything in between! I adored the reboot’s first season  — which was campy, hilarious, and surprisingly self-skewering? (All those elements are still present in the second season by the way, even if the pacing is a bit more uneven). It’s succeed because it smartly took the original and turned it inside out, becoming a smart ass commentary about inequality and privilege in public education without losing any of the candy-colored silly heart that made the original beloved for more than a decade.

As you can see, I have a lot to say! So maybe I shouldn’t have been surprised when I looked up from my 10 episode binge-sprint and large box of pepperoni pizza to find out that my “light, fluffy” review now had… *checks notes* GULP! 3k words worth of notes!! Oh fuck. 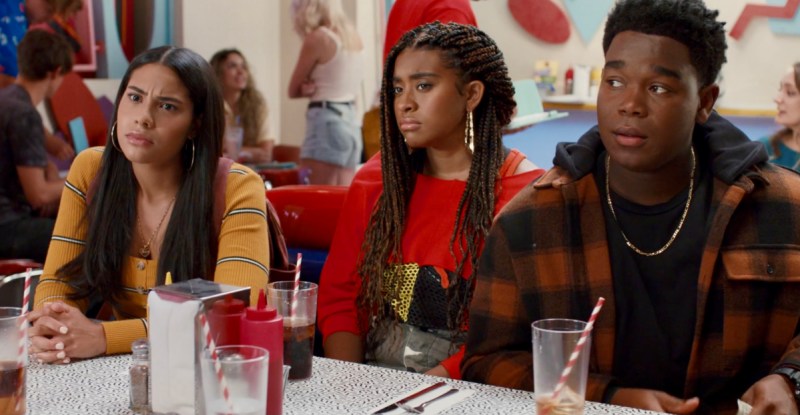 I will spare you the pain of reading all of my deep dive thoughts about race, queerness, gender, privilege, and satire for a show that most of learned to watch while devouring a bowl of sugary cereal in our pajamas. Instead I’ll say this: If you can take over the top humor in the classic style of a mid-90s Saturday morning on TNBC (if you were there, you know), then this season of Saved by the Bell is here to help fill a hole in your nerdy gay heart.

In case you missed the first season, let’s catch up! The new Saved by the Bell, which you can find on Peacock, basically goes like this: Zack Morris somehow became the Governor of California (details not important), stayed married to his high school sweetheart Kelly Kapowski and they now have a son named Mack (Mitchell Hog) who’s currently attending the infamous Bayside High. Oh, and Slater is the PE teacher/football and wrestling coach, and Jessie is now the school counselor. Cool! When Governor Zack accidentally slashes California’s public school budget, schools in low-income neighborhoods are forced to close down. The students at one of those schools, Douglas High, end up getting bussed to Bayside. And that’s where the fun begins.

The new show is surprisingly little about Zack or his mini-me Mack (by the way Zack eventually loses his job as Governor, because of course), and it is very much about the brown and Black kids whose world has been turned upside down. The new time-stopping, fourth-wall-breaking narrator is Latina book nerd overachiever and student activist Daisy (Haskiri Velazquez) and her best friend Aisha (Alycia Pascual-Peña), prototypical jock — quarterback of the football team and budding wrestling champion — is going to be our new favorite bisexual. She doesn’t know it yet, so let’s keep it a secret between me and you.

When the second season opens up, there are some brief lampooning flashbacks to our lives in Covid and what it was like remote-learning as students, but pretty quickly the show establishes itself in a fictional “post-pandemic” era and gets right back to the business of cracking jokes. The football season has been cancelled because football is dangerous to your brain and spine duh, so Aisha has picked up wrestling. Resident high school queen bee and drama queen Lexie (Josie Totah — whose comic timing continues to grow with her over the years) gets caught up in some sports-adjacent drama of her own, when in episode five (“From Curse to Worse”) a neighboring high school West Beverly tries to enacts a anti-trans sports ban, like so many of the ones that have swept our country over the last year as thinly veiled  hate laws directly targeting trans kids. 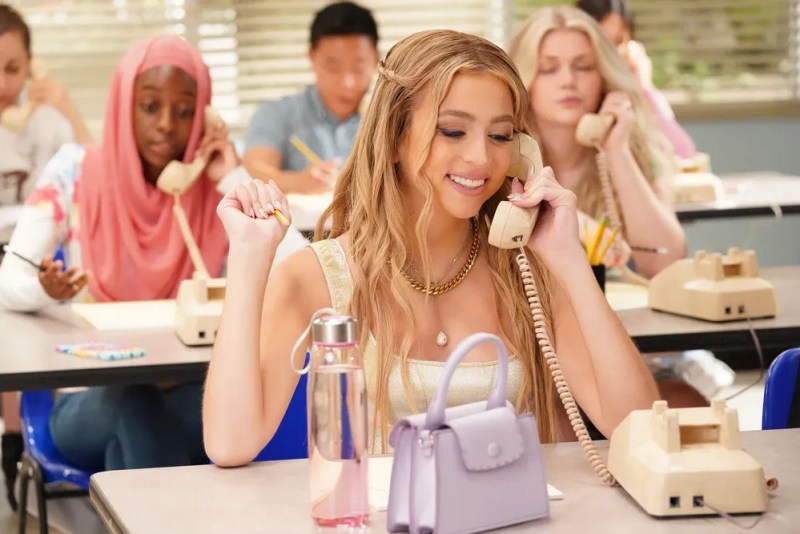 Now understand this, high femme queen Lexie has never played a sport that isn’t cheerleading in her life, but by proximity she gets unwillingly thrust into the moment’s spotlight. And remember the 3k worth of notes I told you about earlier? At least half of them come from this episode.

It’s definitely an “After School Special” — which I think would have bothered me more if were talking about literally anything other than Saved by the Bell, an archetype of the genre. It also wraps with an incredible delicacy that keeps the skewering tone that’s come define the reboot, without losing any of the emotional punch thanks to a knockout performance by Josie Totah. It ultimately drives home the importance of trans and queer communities, and our joy, especially for teens. It also gets into the nuances of what is “trans” or “queer” enough, particular at a time where we are bombarded with daily news stories reminding us of how many people hate us simply for living (something that Lexie touches on directly and if I never expected Saved by the Bell to draw tears, well today was the day).

Still, and that’s not to take anything away from a sincerely good episode that might be my favorite of the season, if we’re going to talk about Lexie as a trans teen girl living in 2021, her transness could be brought up at other points in the season that aren’t about hardship. Of course Lexie is always trans even when it’s not mentioned in the show, and it barely ever is! She has an adoring goofy boyfriend, a lackey to bully like all good mean girls before her, and a crew that loves her. But if we’re going to go there, I’d love to see her transness brought up in other contexts that aren’t rooted in her traumas.

The Very Special LGBT Episode also introduces us to Chloe (perennial favorite Ariela Barer), who is the head of PRISM — Bayside’s LGBT Club. Chloe develops a very adorable crush on Aisha that plays out over the back half of the season. And when I tell you that I love these Latina dorks and their dorky-ass love with all of my heart!! I am a full grown person, but I could not stop squee’ing at my television like some kind of tween.

As Aisha is working through her own feelings — she’s always known she’s bisexual, those crushes on Sue Bird, Janelle Monáe and that one mannequin at PacSun with the bikini top and board shorts weren’t for nothing! But she’s never felt them for a girl she’s known in real life before — she finds herself turning to Lexie, who up until this point has always been something of a frenemy. I loved the subtle nod to solidarity between these queer and trans teen girls of color, it’s a knowing wink to how our communities find each other, even in predominately white and cis and straight environments. Aisha also randomly breaks out into a British accent straight out of Bridgerton (her words, not mine) due to nerves and Chloe takes to chanting “cool cool cool cool cool” while walking away when her gay feelings overwhelm her. What did I tell you! LATINA! DORKS! IN! LOVE!!! 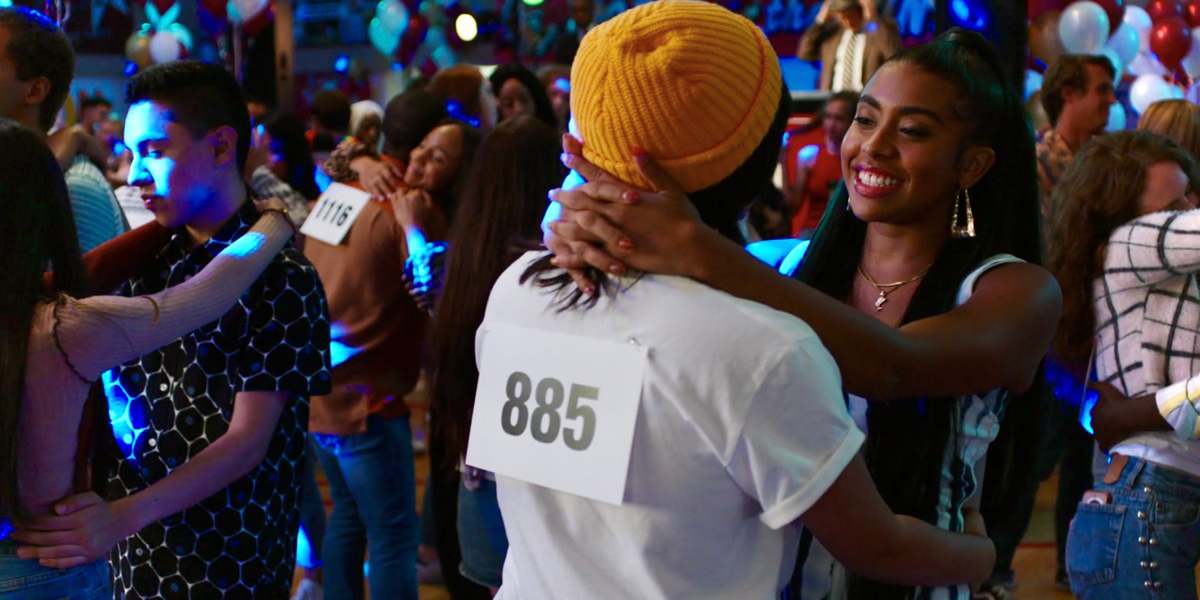 The season wraps with having to take down those losers at Valley in a contest of school spirit, because of course it does, it’s Saved By the Bell. While all that’s going on, Aisha and Chloe get have many, and I mean many iconic high school couple moments, ripped right out of the Zack and Kelly playbook. Except this time make it Latina, and queer.

You will smile. You will laugh. You will draw little hearts over the television with your fingers and embarrass yourself.

(I didn’t have time to fit it into this review but there’s also an excellent episode dedicated to Aisha, and the ways that Spanish-speaking students, especially those who speak Caribeñe Spanish, are policed for their language use in schools that ends with AC Slater taking back his given name of AC Sanchez and brought back up very specific, very painful memories of my childhood AND WHAT DID I SAY ABOUT SBTB MAKING ME CRY DAMNIT!!)

With Saved by the Bell, Gentefied, and yes even Generation Q — queer Afro-Latinas are having quite a year on television, which is something I hope to write more about when I have the time. But for now I’m here to celebrate bisexual jock and Bayside legend Aisha Garcia, who has an enviable wardrobe, a killer sense of humor, and ya damn right — gets the girl. 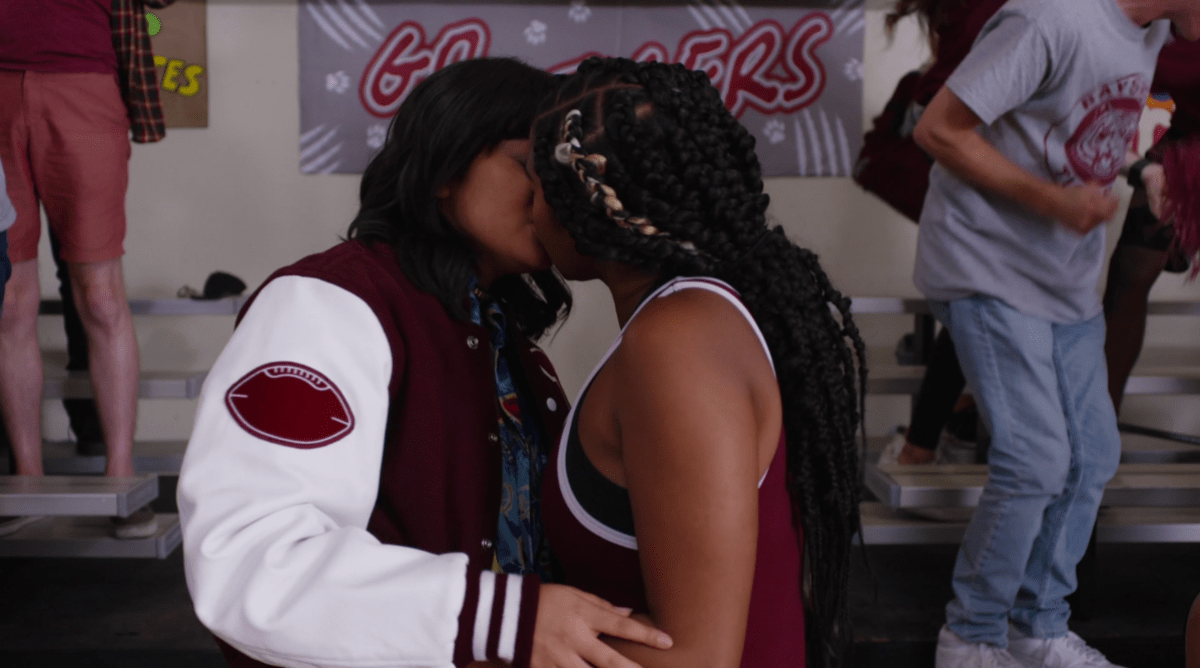