Perhaps you, like me, came of age in the mid-90’s, when The Spice Girls ruled the charts. They were bastions of feminism for very young girls, clomping around in huge platform shoes, posing cheekily for photos all around the world and declaring that the only thing the world truly needed was a healthy dose of girl power. Their message was simple, powerful and effective. The Spice Girls were more than pop stars – they were superheroes, and as far as my 12-year-old brain could tell, they could do no wrong.

Today we are here to discuss Melanie Brown, née Scary Spice, and question whether or not our dear Melanie has forgotten the principles of girl power.

Best music video of all time, and if you do not agree with me you are wrong.

Friday night, the artist formerly known as Scary Spice appeared on Alan Carr’s variety show “Chatty Man,” presumably to discuss her experiences as a judge on pretty much every singing-and/or-dancing-based reality show on this planet. Somehow, the topic of Mel’s well-reported fluid sexuality came up. As we’ve discussed previously, Melanie has had well-documented romances with women, and has also admitted to kissing all the other Spice Girls (be still my heart). In 2007, she was quoted as saying, “People call me lesbian, bisexual or heterosexual, but I know who’s in my bed and that’s it… I have a huge libido and a great sex life.” She’s made a few troubling statements about sexuality over the years, but things really took a turn Friday when Carr mentioned straight women who “become lesbians” for a period of time, presumably for cheap thrills.

“Yeah, I was one of those for a few years,” Brown declared. When asked if she’d consider herself a lesbian, she replied, “I would not call it that. I was just one of those ladies. Now I’m happily married.” Oh, OK. 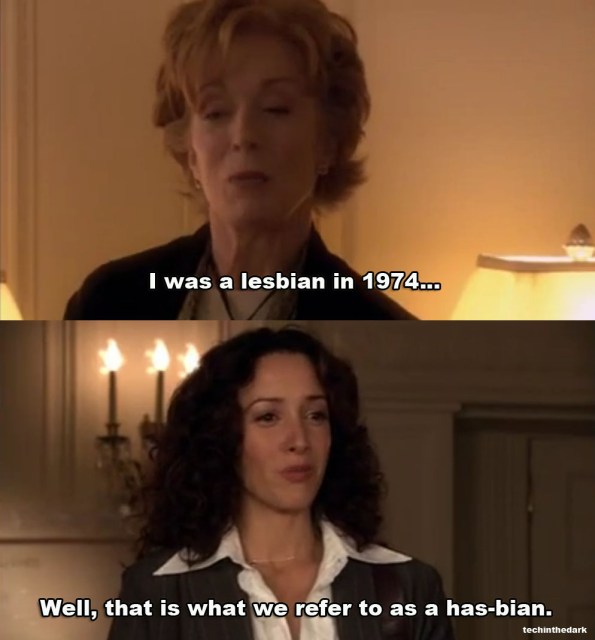 Melanie Brown has been married to film producer Steven Belafonte since 2007 and the two seem very happy together, which is awesome! We’re really happy for you, Mel! However, the implication that Melanie’s attraction to women is something she experimented with for a brief period before putting it on the shelf and forgetting about it entirely is troubling for… basically anyone who falls somewhere in-between on the Kinsey scale. “Now I’m happily married” also posits “happy marriage” and “being a lesbian” as mutually exclusive.

Her dalliances with women (including several legitimate and serious relationships that spanned multiple years) don’t make her “just one of those girls,” and to phrase it that way seems awfully insulting – as though her relationships with women were in some way less important than her relationships with men. There are so many ways she could speak positively about her past relationships and the genders of her former lovers without implying that she had somehow “cured” her sexuality by marrying a man! So many! Please just stop.

Of course, Mel B doesn’t owe us anything and is free to define herself as she pleases — she isn’t a lesbian spokesperson, nor is she the dictionary responsible for defining the sexual orientation vocabulary. But as a feminist and an LGBTQ ally, shouldn’t she be staying away from perpetuating damaging stereotypes about sexuality when she speaks about her own? As Riese wrote when Jessie J told the press that her bisexuality was just a “phase” and that she wanted to “stop talking about it completely now and find [herself] a husband,” “It’s not Jessie J’s responsibility to ensure that your friends and family believe that your bisexuality is real… but it is her responsibility, as it is every ally’s responsibility, to not talk about bisexuality like it’s a curse or a disease she can’t wait to be rid of — a nasty thing from the past she loathes to revisit. And although she doesn’t have to lie to the media, it would’ve been awfully kind for her to refrain from referring to it as a “phase,” specifically.”

The UK’s Daily Express has made a very big deal about Melanie asking The Great British Bake Off television presenter and lesbian-of-note Sue Perkins for her phone number after the show, which obviously means that the two are destined to hook up. Because that’s how phone numbers work.

but for real though.

We will continue to throw shade via Peggy Peabody as this story develops.