Geena Davis is a pretty awesome person. She’s been the first female American president (if only on Commander in Chief) (especially if you don’t count BSG which you shouldn’t because that’s in the future), almost went to the Olympics for archery, and for the past six years has been studying gender equality in media at an institute she founded. And it’s doing things! Also I like her hair.

Six years ago, Davis started an institute to study gender in media in response to the inadequate representation of girls she saw on her kids’ TV shows. In an interview with Ms. while at a panel for the Paley Centre for Media earlier this week, Davis explains:

“My daughter was about 2 (she’s 9 now) and I started watching little kids shows and G-rated videos with her and it really struck me how few female characters there seemed to be. … I started counting the characters while we were watching. I knew there were far fewer parts for women in movies in general, but that we would be showing that to kids was sort of a revelation. … [It] made me realize that if I wanted to actually have an impact I should probably have the numbers … the actual data to show people, and it kind of snowballed into a whole institute.”

Despite the numerous articles calling Davis “Hollywood’s feminist of the day” or similar throwaway titles, Davis and The Geena Davis Institute on Gender in Media are actually doing things. Excellent things. 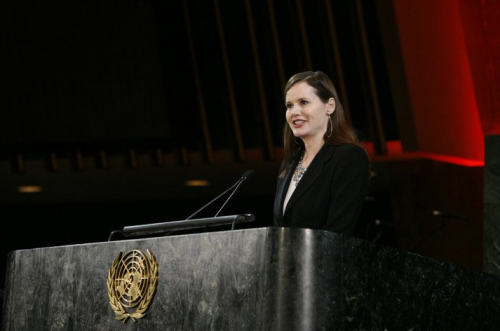 This July, Davis, along with Representative Tammy Baldwin and Senator Kay Hagan, also introduced The Healthy Media for Youth Act. If passed, the bill would give support to media literacy programs and research on gender equality in media and would establish a National Taskforce on Women and Girls in the Media to develop standards for positive and balanced representation. In a statement, Davis said:

“I am proud to join with Sen. Hagan and Rep. Baldwin to promote gender equality and positive portrayals of women and girls in the media. What children see affects their attitudes toward male and female roles and impacts the value they place on girls and women in society. The Healthy Media for Youth Act will help ensure we are creating a positive media environment for all our children.”

Last November, Davis testified at the Senate Judiciary Subcommittee on Human Rights and the Law in support of the Convention on the Elimination of All Forms of Discrimination Against Women, a treaty that was first addressed 30 years ago that the US — along with Sudan, Somalia, Iran, and several other countries — has still not ratified.

Davis has also been involved with UN Councils, written letters to the editor, and worked for gender equality nationally and internationally. Probably because the more research the Institute does, the more urgent change starts to seem.

Some of the findings of Institute research (from several studies) include:

In her interview with Ms., Davis said, “The media can powerfully affect people positively. For example, girls seeing characters playing [nontraditional] roles will be much more likely to seek unconventional occupations later in life.” But just because it can do something doesn’t mean it is. Some of Davis’ goals include having more female representation as main characters, minor characters, narrators, and in crowd scenes; having more of that representation consist of people of colour; having more female characters with aspirations greater than romance; and having more female characters valued for their “inner character” as opposed to their ability to look good in hot pants (granted, not her words verbatim). None of that seems like a lot to ask for. It’s just great that one more person-slash-up-and-coming research institution is doing the asking.