One day Brooklyn-based artist Jennifer Dalton was watching the Daily Show when she realized she would like to listen to a female guest instead of all these dudes please.  To confirm her suspicion that she hadn’t seen a female guests in roughly ages, she did a little research and wouldn’t you know it she found out that in 2010 79% of guests are male and only 21% were female. I know!

You’re probably thinking the male/female ratio has something to do with most of the guests being politicians and as we know there aren’t as many women in politics so give Jon a break.  Alas, this is not the case and only 18% of guests on the show are politicians and 68% of the guests are authors and musicians.

As reported by Jezebel,  Dalton used this as inspiration to create the piece, What Does An Important Person Look Like? (2011) as part of her exhibit Cool Guys Like You, now showing at the Winkleman Gallery in Chelsea. Other shows she researched include Terry Gross’s Fresh Air, The Rachel Maddow Show and Bill Maher’s show. In this piece Dalton arranges photos of guests in ten rows of different categories including a row for actors, a row for chefs, a row for filmmakers, etc.

Image from "What Does An Important Person Look Like? " photo credit: Jennifer Dalton and Winkleman gallery 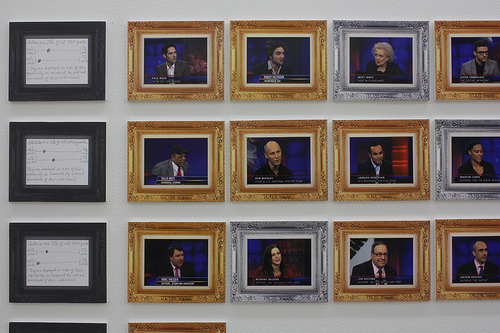 Image from "What Does An Important Person Look Like" 'exhibit photo credit: Jennifer Dalton and Winkleman Gallary

In an interview with ARTINFO Dalton speaks about the activist side of her work, and her interest in the answer to the question that her work asks: What does an important person look like? She explains, “looking at all the guests from one show for one year is incredibly fascinating for me. When they are all laid out visually you see patterns that are impossible to see when you watch one show at a time over a year. First and most obviously it is impossible not to notice that the guests are overwhelmingly male and white. But I also notice subtler differences and trends of dress, manner, and gesture.” 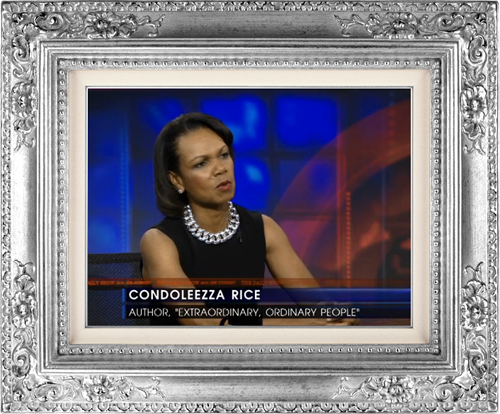 This is not the first time the Daily Show has faced criticism for having a “woman problem,” by the way.  Last year Salon published a piece about the lack of women behind the scenes at many talk shows and also addressed the issue in an interview with Samantha Bee (LOVE HER.).  Bee spoke positively of her time on the show, where she served as the sole female correspondent for several years, but said that many women seem intimidated to submit work to the show.

In an open letter on the gallery’s website, Jennifer Dalton addresses the hosts of the late night shows she has critiqued. While beginning with sounds of praise and admiration, Dalton ends the letter with a reference to movie Heathers  and a call to address the disparaging gender gap in guests.

I assume you like to see yourselves as critical thinkers. Might it be possible to get a bit more critical about the internal and external forces that encourage all of us to think that men produce the best ideas and cultural products out there? I think it might.

As I hope this letter makes clear, I have a sincere desire to understand your perspective on a problem we all share. But at times I also wonder if it’s edifying for me to be exposed to so much bias, and Winona Ryder’s character in the 1988 movie Heathers springs to mind. At the end of the movie she finally realizes that she is better off without her smart, hot and psychotic boyfriend (played by Christian Slater). She tells him, striking a blow for all of us who feel oppressed by those they have admired, “Do you know what I need? Cool guys like you out of my life.”

I’m with Dalton that these talk shows are to be praised for much of the work they do, but the  gender bias she has highlighted is obviously troubling. And I can’t help but wonder how many of these guests were gay? Using visual media such as Jennifer Dalton’s piece is a valuable contribution to understanding and discussing the picture mainstream media presents, and how that influences the gender gap felt in so many other ways.