Generally speaking I prefer TV over movies. Probably because I like my entertainment like I like my women: short, funny, increasing in gayness and well-written (the analogy sort of petered off there in the end). Also, it might have to do with the general decline of movies worth seeing. So, the Emmys are the award show most relevant to my interests (unless you count the Teen Choice Awards). Jane Lynch hosted the 63rd Annual Primetime Emmy Awards last night making her my favorite lesbian to host an award show this year. Before I begin discussing the ceremony, it’s worth your time to read over how the Emmy nominations work since the nomination process is based on general popularity and specific episode screening. 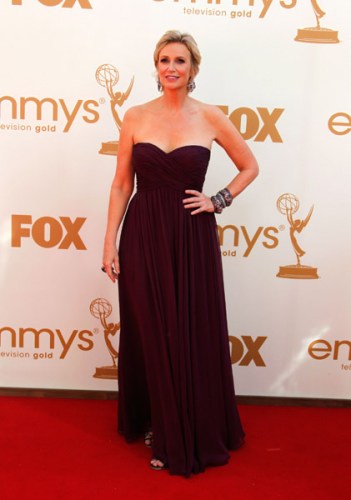 Though certainly some critics did not love last nights show, in my eyes, Lynch can do no wrong. She was funny, spirited and really really well dressed in a series of David Meister dresses. By all measures she was better than James Franco and Anne Hathaway at the 2011 Oscars. While Lynch’s hosting was not exactly ground-breaking on the lezzie front– Ellen DeGeneres has hosted or co-hosted four times — Lynch still brought an added self-awareness of her sexual orientation to her performance (“A lot of people are very curious why I’m a lesbian … Ladies and gentlemen, the cast of ‘Entourage”). Some of these jokes flopped or inspired other unenthused reactions, but I appreciated their unapologetic existence and regardless, Lynch aside, The Emmys were overall quite gay. Gay characters and behind-the-scenes folk were nominated; gay winners thanked their partners. Hollywood has long been hailed with nauseating frequency as part of “the liberal media,” yet we should not lose sight of how far queer actors, actresses and media personnel of all types have come. Now. On to the show. Lynch’s intro was pre-recorded and by far the funniest part of the night. The premise was that all of TV Land lived in one big apartment building. Alec Baldwin was initially supposed to play the “president of TV” in said intro, but quit and declined to attend the Emmys after Fox censored one of his jokes about the NewsCorp hacking scandal. Lynch joked she would be lip-synching, but indeed sounded downright awesome. Just watch it for yourself:

The comedy category not only started off the Emmys, but indeed stole the show completely. Modern Family dominated. I mean, seriously dominated. Modern Family was nominated in every Comedy category with the exceptions of Outstanding Lead Performance (ensemble casts are considered without leads). Modern Family took home five awards including Directing, Supporting Actor, Supporting Actress, Writing and Guest Actor. Due to multiple nominations in each category, literally every adult cast member of Modern Family, three of their directors and two writers were nominated. The only Modern Family loss was Nathan Lane losing to Justine Timberlake‘s SNL skits for Outstanding Guest Actor in a Comedy Series. 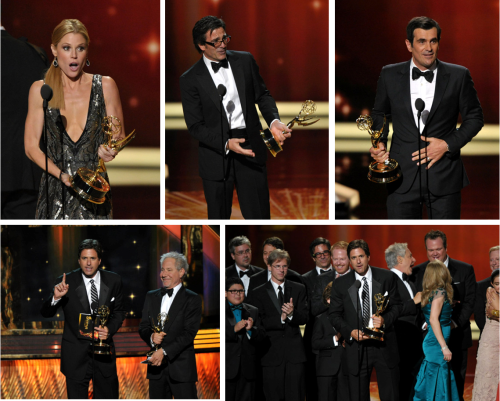 Ty Burrell‘s acceptance speech was particularly funny and worth watching:

Plenty of people thought Steve Carell should have won the Outstanding Actor/Comedy award this year for his final portrayal of Michael Scott on The Office, but I must admit when Jim Parson won for playing Sheldon Cooper on The Big Bang Theory I literally stood up, fist pumped, pointed at the screen and yelled “Yes! Yes, damn it, yes!” Some might say I’m simply partial to Parson because I’m a gigantic science geek, and yes, they’d be partially right (pun intended). Regardless, Parson’s acting deserves the awards he receives because, in truth, the scripts are not that spectacular. There is a reason that Big Bang wasn’t nominated for Outstanding Writing/Comedy or Outstanding Directing/Comedy. Parson brings to life what could be simply a clique show about nerds through the mannerisms and verbal cadence he brings to a character wholly unlike himself. His acting is so fresh that I’d pay $2.99 extra for it in the Whole Foods produce department. 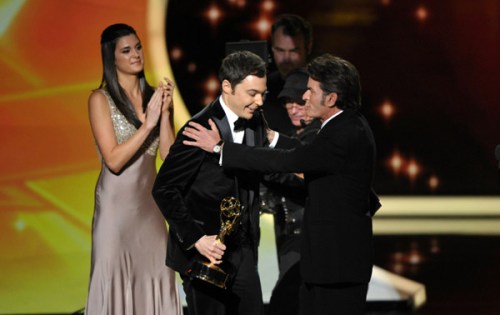 The announcement of Outstanding Actress/Comedy is funnier if you watch it before I talk about it:

In a stroke of sheer genius (via the mind of Amy Poehler) each of the nominees for Outstanding Actress/Comedy walked on stage at the announcement of their nomination and held hands a la Miss America. It was fucking hilarious. Though I’ve never seen Mike & Molly the show for which Melissa McCarthy won, I should probably start watching immediately since she managed to beat out Tina Fey and Amy Poehler. I can’t help but wonder if perhaps the Emmy was a slight nod to Bridesmaids as well, but it’s hard to say. Either way, it was awesome to see Sookie St. James win an award. 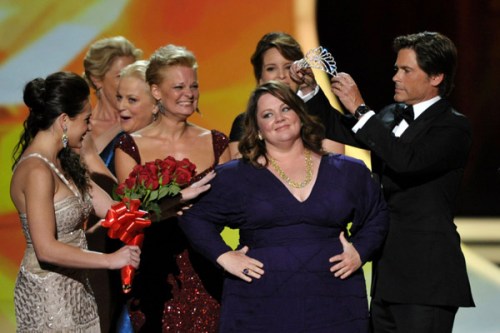 MELISSA MCCARTHY IS THIS YEARS QUEEN OF COMEDY

Somewhere, approximately between the Comedy and Drama categories aired an epically funny video bringing together characters from all different comedies to complain about their jobs. Clips like this are the reason to watch award shows.

Unfortunately, after the Comedy awards were given out, the show sort of went downhill. The awards for Drama took a serious hit in the gay department– mostly in that Modern Family wasn’t 90% of the nominations. Also, with so many of the nominations going to AMC and premium channels, it would be surprising if viewers, like me, didn’t feel a bit left out at times. The presenters continued to try to make jokes, but were significantly less successful than the actual comedians. Friday Night Lights earned two awards; Outstanding Writing/Drama (Jason Katims) and Outstanding Lead Performance/Drama (Kyle Chandler). I don’t watch Friday Night Lights because, um well, it’s a sports drama set in Texas without any major gay characters (the Google told me there was briefly a lesbian who kissed a guy though). Similarly, Julianna Margulies won Outstanding Lead Actress/Drama and Margo Martindale won Supporting Actress/Drama for The Good Wife and Justified, respectively, also two show I don’t watch. What can I say? Dramas make me sad. 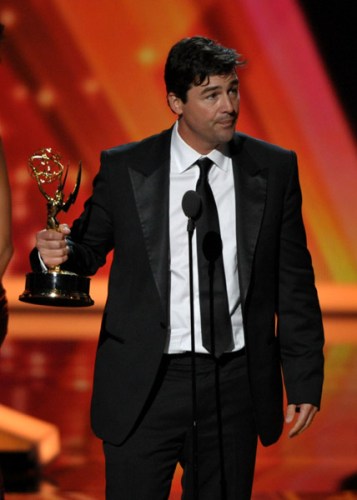 KYLE CHANDLER. I HAD TO GOOGLE HIM.

Martin Scorsese won for his direction in the pilot of Boardwalk Empire. I mean, seriously? It’s like shooting fish in a barrel. 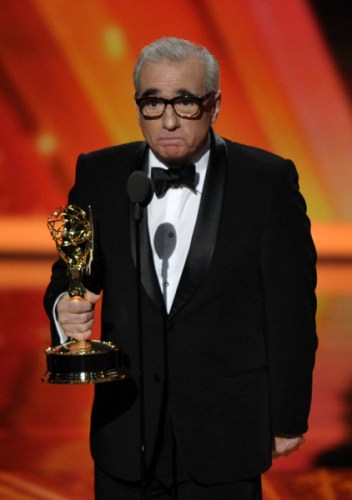 Though many praised his performance, I was still very pleased to see that Peter Dinklage took home the award for Outstanding Supporting Performance/Drama for his role in Game of Thrones. Dinklage was well cast and was therefore at his best in Game of Thrones in his signature rude, pretentious and sharply intelligent character. I do believe it’s also worth nothing that Dinklage is the first little person to win the award. 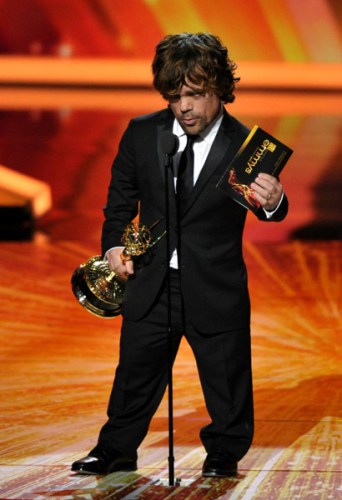 PETER DINKLAGE IS A BADDASS

One of the best parts of the Emmys each year are the announcement of nominees for Outstanding Writing for a Variety, Music or Comedy Program. This is code for Best Latenight TV Show. Basically each show has to find a way to recognize the team of writers that contributes to each episode. Of course, with a team of comedy writers, they’re not just going to list some names and call it a day.

Once again, no surprises here as The Daily Show took the only categories anyone cares about. I particularly loved this acceptance speech.

As the Emmys wound down, Downton Abbey prove the little guy really can win, as the PBS miniseries beat out its exclusively premium channel competition for four Emmys: Outstanding Miniseries or TV Movie, Outstanding Writing (Julian Fellowes), Outstanding Directing (Brian Percival ) and Outstanding Supporting Actress (Maggie Smith). Yes, okay that says Maggie Smith. So I guess the little guy can win when it imports a show from London with a £1 million per episode budget and Professor McGonagall in the cast. 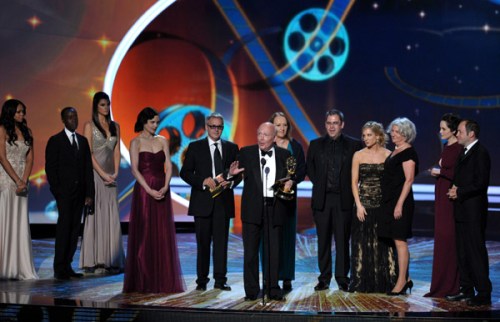 As all award shows must, the Emmy’s took the time to remember those who had passed in the last year. I know I’m getting old because I’ve gotten to the point where I know practically every actor they show. Noticeably missing was Jeff Conaway, best known for playing Kenickiein the Grease and Bobby Wheeler in Taxi. While I appreciated the life music, I was slightly disappointed that the focus was more on the singers than the In Memoriam reel. Also, who are these guys singing? O-Town? (I googled it, they’re called the Canadian Tenors.) 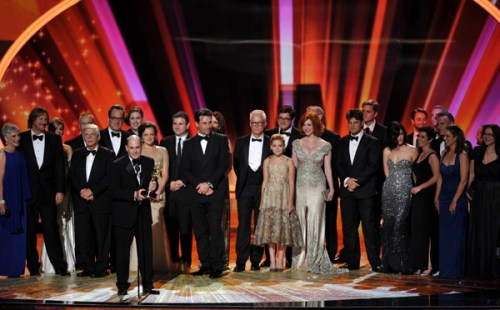 LARGE AND IN CHARGE CAST

Similarly unsurprising was Modern Family‘s win. The last win of the night, the producer still managed to make their speech heartfelt and funny.

That was about it. Not exactly a nail biter, but I think a subtle nod to America’s (or at least Hollywood’s) growing normalization of queers in the media. Oh also those guys from Lonely Island did a medley of their songs from the last year.