The walls closed in. My heart thudded up against my ribcage, suddenly too large for my chest. My lungs felt like they had collapsed. I both wanted to hide, and wanted desperately to be seen. It was 2008, I thought I might be gay, and I had gone to the only lesbian bar in Philadelphia in fearful hope that someone else might be able to figure things out for me. I didn’t get the answers that night, but I was still saddened this week to learn that Sisters Nightclub is closing. 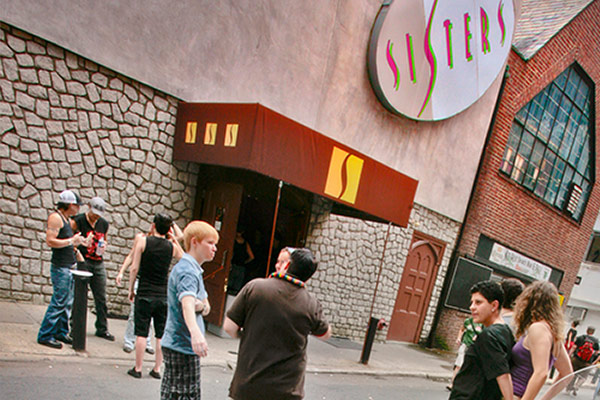 5,000 square feet and three stories of girl-on-girl-on-bar (via VisitPhilly.com)

On Monday, General Manager Denise Cohen posted notice of the closure on Facebook:

How do you say goodbye to something that has been part of your life for so long – a dream – a passion – a love … I have worked within the Gay & Lesbian community for 24 years with 17 of them at Sisters … today with much sadness no actually with a broken heart I am announcing that Sisters Nightclub is no longer in business.

All future events are cancelled except for the Big Gay Boat party hosted by DJ Deejay on August 25. It takes place off site at Moshulu, a four-masted sailing ship; the beloved Gayborhood nightclub and bar itself will open its doors no longer. 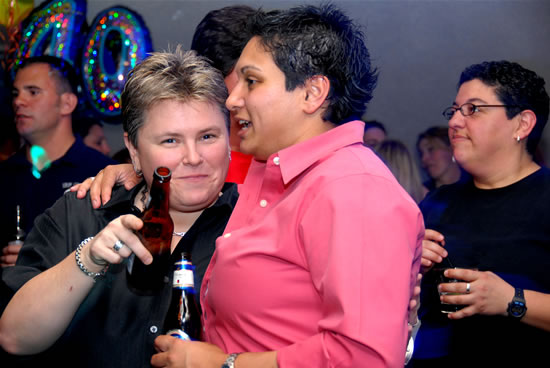 Denise Cohen at Sisters (via sistersnightclub.com)

My personal experience with Sisters was brief, but it made a big impression on me. I went exactly once while it was open, and I stayed 30 minutes, tops. I was so nervous that I walked around the block twice before I worked up the nerve to go inside. At the door, I paid the bouncer a $5 cover for a DJ I never managed to hear over the sound of my own heartbeat in my ears. I sat at the horseshoe-shaped bar, downed two Blue Moons, and attempted to surreptitiously inspect everyone in the bar without landing eye contact. I timidly peeked upstairs and downstairs, then fled for the parking lot, having spoken to no one but the bartender. She had to ask me to repeat my drink order, I spoke so quietly.

All in all, I considered the night to be a great success. 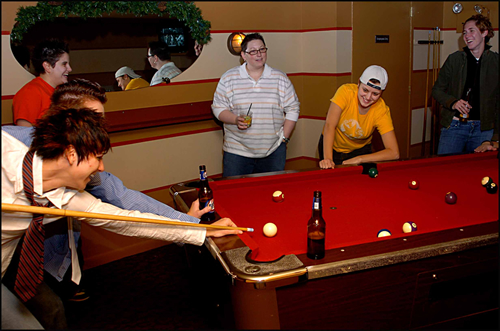 The laid back pool area intrigued me, but I just wasn’t ready to interact with other humans in 2008. (via sistersnightclub.com)

As you may have guessed, Sisters really wasn’t my cup of tea. Lesbian bars terrified me as a questioning 21-year-old; even now, as an out bisexual in New York City, I still don’t feel entirely at home in them. But the point of my adventure that night wasn’t to feel comfortable; it was to explore. I had questions that I couldn’t even give words to, let alone ask out loud. All I wanted right then was to be around some lesbians, watch them living their lives, and see how it made me feel. Sisters allowed me to do exactly that, and I feel so thankful that it was there for me when I needed it. 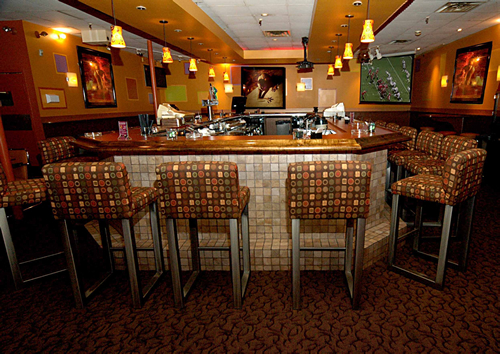 How did I ever avoid making eye contact while sitting at this bar?
(via sistersnightclub.com)

The news of Sisters’ closure comes at a time when many ponder the death of the lesbian bar scene. Like some of Autostraddle’s smart and wonderful commenters, I find the assessment a tad hyperbolic. As Liz mentioned, queer dance nights are plentiful, and they do tend to skew female. Have you been to Truck Stop in NYC or LA lately? Dyke Night in Boston? They’re thriving – although it’s true that they serve a slightly different function. Honestly, I’m not sure Hot Rabbit is something I could’ve worked up the gumption to explore at 21, although others do it all the time. I probably would have figured something else out, but it stings a little to think that the door on the experience I had is closing, even if not fully.

Molly Webb, a patron of the bar for the past year, points out that while there are many spaces where queer women are welcome, there’s a unique sense of community built within lesbian-specific spaces. She recalls the reliable cast of characters that would show up every week. “My best memory of Sisters would be the certainty of Thursday nights, and that everyone would be there and someone would sing ‘Closer to Fine’ on karaoke. It was just stability in our lives,” she says.“Sisters was the only stable space dedicated to just dykes and queer ladies. There’s a definite hole in the Philly queer scene now.”

On Tuesday, Molly staged a funeral to commemorate Sisters and the loss of lesbian-specific space in Philadelphia. A gathering of 15-20 people showed up to write their goodbyes on Post-it notes, put lipstick kisses on the door and leave plastic flowers in the door handle. They are looking to put together a discussion group, but Molly says, “It’s nebulous right now. … I don’t think that there are any definitive or limiting suggestions on the table right now.” 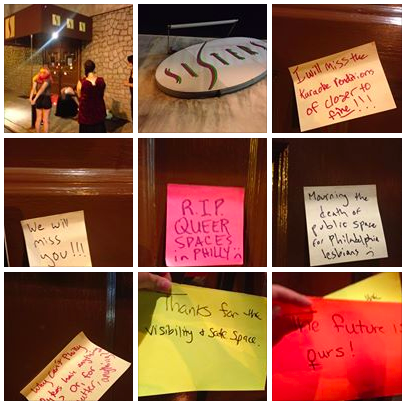 via Facebook event: LAMENTATION for the Death of Sisters and Dyke Space in Philadelphia

Whatever the future may hold, Sisters will not be forgotten. Although the physical location may be locked (and the Post-it notes now removed from the door), there’s a beautiful internet love fest going on for anyone who wants to join in the reminiscing at Denise Cohen’s Facebook and Sisters Philly’s Facebook. 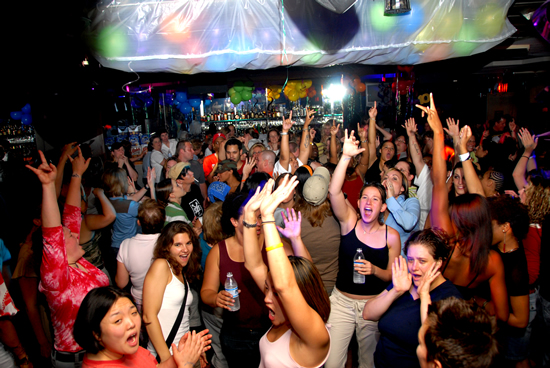 Sisters’ 10 year anniversary party. This week, the bar closes after 17 years.
(via sistersnightclub.com)