Hothead Paisan: Homicidal Lesbian Terrorist is a comic book series written and drawn by Diane DiMassa. The comics were published from 1991 to 1998 and follow the violent exploits of Hothead, a lesbian feminist who tortures and slaughters predatory men. The back cover of The Revenge of Hothead Paisan: Homicidal Lesbian Terrorist anthology describes her as “the over-caffeinated, media-crazed psychotic lesbian with scary hair and a fetish for guns, grenades, mallets, and sharp objects.” But Hothead has a soft side, too. She cares deeply for her cat, Chicken. Her best friend is a blind Zen priestess who prepares wholesome, vegetarian meals. Her love interest is a genderqueer poet named Daphne. 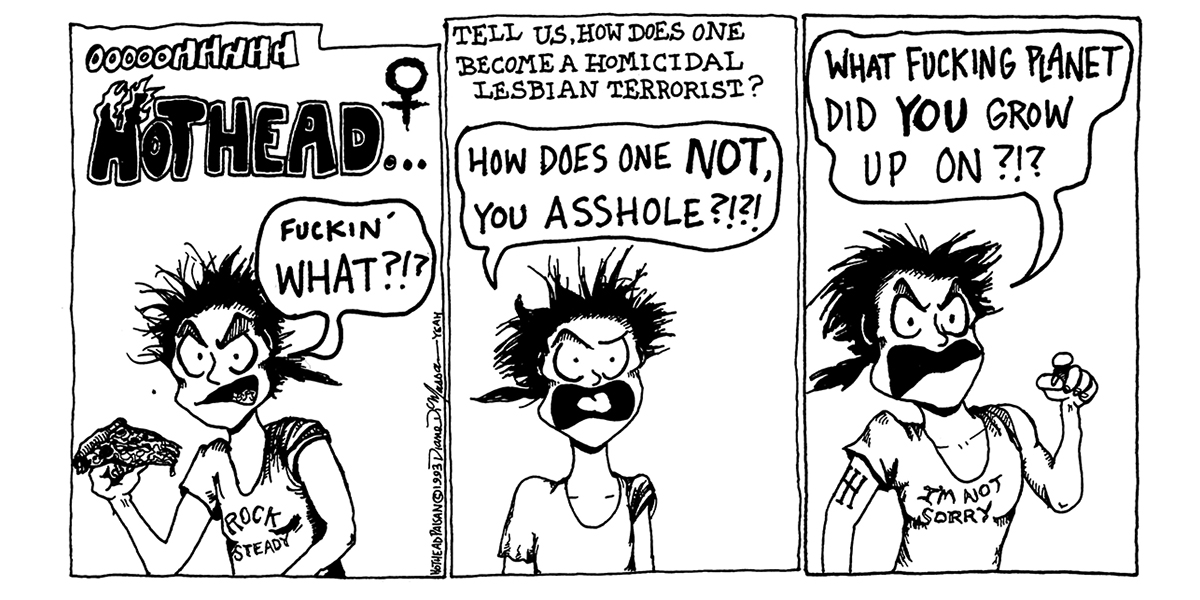 Hothead enjoyed cult status in lesbian and queer feminist subcultures throughout the 1990s. Fans could purchase Hothead t-shirts, postcards, red pepper chocolate bars, and anthology books. A musical adaptation starring Ani DiFranco and Susan “Stop the Insanity” Powter was performed at the 2004 Michigan Womyn’s Music Festival. But despite its early resonance, Hothead has faded from lesbian and queer cultural memory. The books are long out of print. I have friends who can name every single Dykes to Watch Out For character, but have never heard of Hothead.

In a typical comic strip, Hothead wakes up feeling hopeful and excited for the day ahead. Within minutes of waking, however, she sees a sexist commercial, receives a catcall, or witnesses a domestic abuse situation. Hothead spirals into fits of rage and kills the offending men. Despite being small and too poor to afford adequate food, Hothead wields a comically large labrys and fights with superhuman strength. Her rage blackouts leave her too frayed to leave her squalid apartment, connect with others, or maintain romantic relationships. She’s often depicted on crutches, or covered in bandages and bruises. By collapsing the division between Hothead’s mental and physical health, the comics visualize how existing in an unjust, oppressive world can grind down a body.

I first came across Hothead in my women’s studies graduate program. I was looking for texts where lesbians embody feminist politics; my advisor pointed me towards Hothead and I was immediately fascinated. I spent an entire semester writing a paper on disability and fantasies of the body. I just re-read this paper and it’s a real slog. It’s 26 pages long. I’m not even sure what it says; there are too many semicolons.

I do know, however, that I visualize myself as Hothead often. 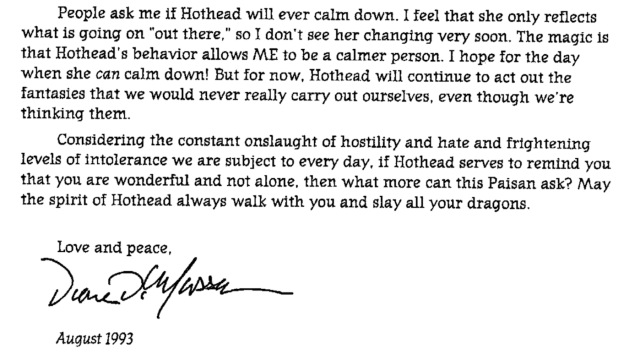 During Dr. Christine Blasey Ford’s senate hearing and the ensuing Brett Kavanaugh vote, my mind kept returning to “Hothead Rocks (and Chicken Rules).” First published in 1993, this comic strip opens with Hothead and Chicken planting an herb garden on the first warm day of spring. Hothead ventures out for coffee and on the walk home, ducks into the city courthouse to poop (in one of DiMassa’s signature jabs at gender essentialism, the bathroom door is labeled “labia”). While in the courthouse, Hothead overhears a rape trial. She stands in the doorway and listens to the survivor’s harrowing testimony. She watches as the judge acquits the rapists and orders the survivor to pay a “$5,000 temptress fine.” Hothead immediately springs into action. She pulls the rapists’ lawyer into a dark alleyway, tridents his neck to the wall, and lights a bundle of dynamite in his mouth. Then, she kidnaps the rapists and forces them to witness each other’s castrations in an abandoned warehouse she calls “the misogynist hall of fame.” One panel contains a particularly graphic rendering of a rapist’s mangled corpse. DiMassa includes an astericked note that reads: “Does this freak you out? It’s based on a photo of a botched abortion.”

The comics are a cathartic revenge fantasy. I wasn’t surprised to learn, then, that DiMassa began writing and drawing Hothead as a means of overcoming drug and alcohol addiction. I keep going back to her author bio in The Revenge of Hothead Paisan, which reads: “[DiMassa] started out as a nice little Italian girl in patent leather shoes, discovered rage, discovered alcohol, progressed, dropped the bottle, kept the storm cloud, and now somehow manages to make a living out of having her secret fantasies and demons made public.” Unlike DiMassa and her readers, Hothead can wreak havoc on herself and others with zero consequences.

It has come to our attention since the publication of this post that DiMassa made trans misogynistic statements in 2004 that she, to our knowledge at this time, hasn’t made an effort to walk back or apologize for. For that reason we encourage you to find the book at a library, buy it used or borrow it from a friend instead of purchasing it. You can read more on this at Queer Book Club and Feministing.

Maddy has written 1 article for us.