Not much happened this week on Pretty Little Liars. I mean, there were your standard couple fights and lying, but no real plot development and (because I know it’s what you care about most) no Emily fingerbanging action. Let’s talk about all the other stuff plus a dose of fashion anyways.

As we open, Caleb is still playing the News of the World game and hacking into A’s phone. Even though he knows it will be creepy and dangerous, Caleb wants in on the big secrets. He figures since he’s Hanna’s sexual partner it’s his job to look out for her complete and total emotional and physical safety. So basically he pushes his way in to the club. 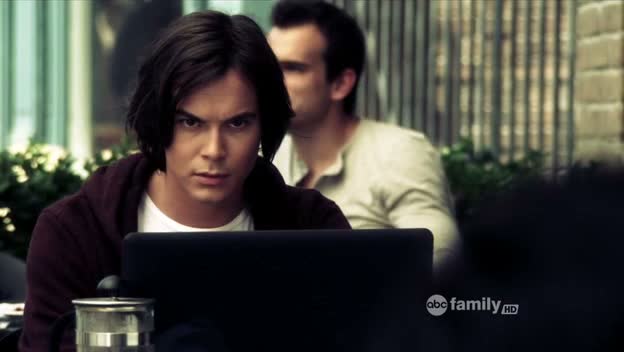 THIS IS HOW RUPERT MURDOCH GOT HIS START

Hanna has a really big problem with this because, you know, she loves Caleb so her job is to protect him from harmful things like knowledge. Asking for help is for the weak, if you truly love someone you’ll lie to them about all your problems in order to make them go away and keep your partner safe. Duh. Hanna throws Caleb’s hard-hacked data in the blender and tells him he’s off the case! That’s right, he’ll have to go do something unproductive with his time instead… like read a book or study or apply to college with those advanced level computer skills. Little does Hanna know Caleb decides to continue working with the other liars in secret. You know, because he loves Hanna so he has to keep her safe by lying to her. Hm. 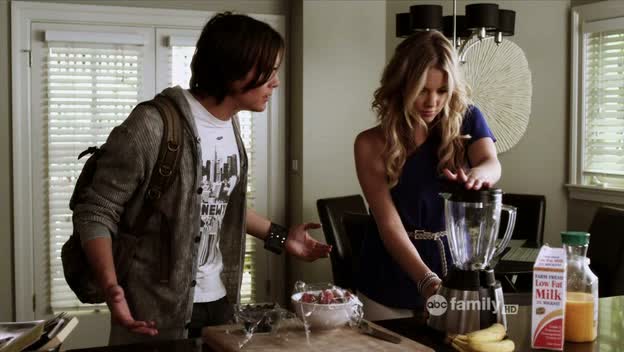 Before Hanna went all Lo-Tech No-Tech, Caleb managed to uncover some video of Jenna, Garret and Ian which told us approximately nothing about who A is or what the fuck is going on. All it really did was remind us that Garret and Jenna are fucking creepy and in on some bad shit with Ian. 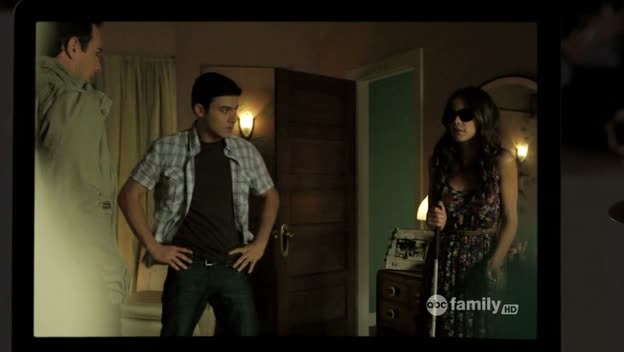 IS IT WRONG THAT I KIND OF LIKE JENNA'S DRESS?

For the record, I don’t just think Jenna’s relationships are creepy here. I thought it was weird on Hannah Montana too. 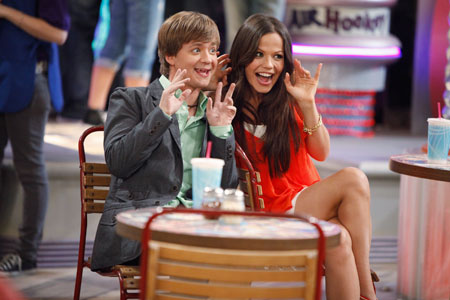 The Scooby Doos gather to discuss the contents of the hacked video and decide how to move forward. While discussing the mysterious Alison box, Hanna popped open the neck off a doll to reveal threatening notes sent by a familiar voice. As it turns out, Alison was also being stalked by a psycho A and also didn’t bother to tell a parent, police officer or trusted adult. 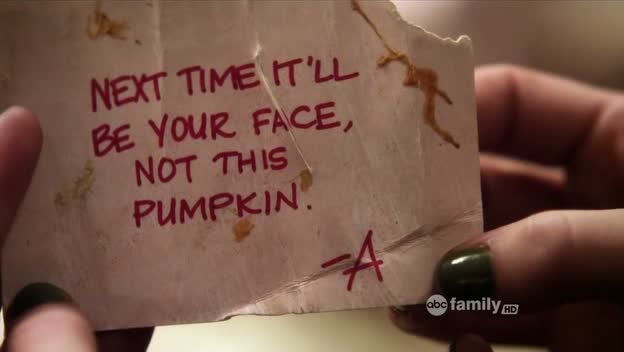 P.S. YOU ALSO HAVE SOMETHING ON YOUR FACE. NOPE A LITTLE TO THE LEFT. 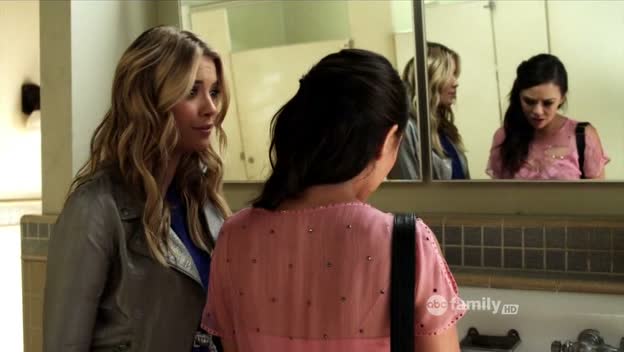 I adore Mona’s shirt in a Cute But I’m Too Old For It kind of way. If I could go back in time and be a high school student with a full time make-up artist and hair stylist and a designer wardrobe I would totally dress like her. That being said, I think a lot of women (including myself sometimes) feel like they have to shy away from pink because it’s too girly. I’d like to remind you that pink is also the color of puppies’ noses and strawberry yogurt and if it’s good enough for puppies and yogurt it’s good enough for me. That is to say, that pink looks nice on some people and there’s no concrete reason, as far as I’m concerned, to avoid it. On the other hand, what exactly is Hanna wearing? Is that a metallic leather zip-up blazer? Too many trends. Unacceptable. It’s such a shame because I suspect that blue shirt underneath is a lovely color.

While Hanna and Mona have some Monanna feelings time, Aria makes a phone call to Ezra basically begging him to meet her by a clocktower in Philly. Is it weird that I’m officially desensitized to the wrongness of their relationship? I’m over it and now I’m just sort of rooting for them. I mean, technically Ezra isn’t her teacher at all anymore. 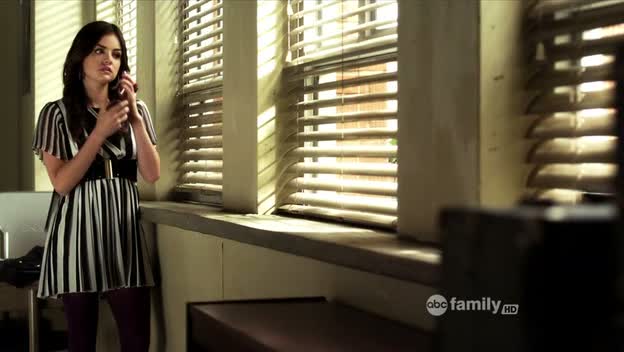 I thought I was ready for stripes to be over, but that was a big fat lie and I’ve changed my mind. I really like Aria’s black and white striped dress. I think part of what I specifically like is that the black and white don’t have the same nautical feel that navy and white or red and white have. A black and white color blocked dress can easily go from day to night. Also, I love a good optical illusion. At the same time Aria also kind of looks like a steampunk jailbird which is fitting for steamy punk jailbait. Ba-dum-ch.

While everyone else is at school, Toby spends the day wild and free climbing over scaffolding like a preschooler who doesn’t know that, bro, that shit’s dangerous. Look how funny this screenshot is: 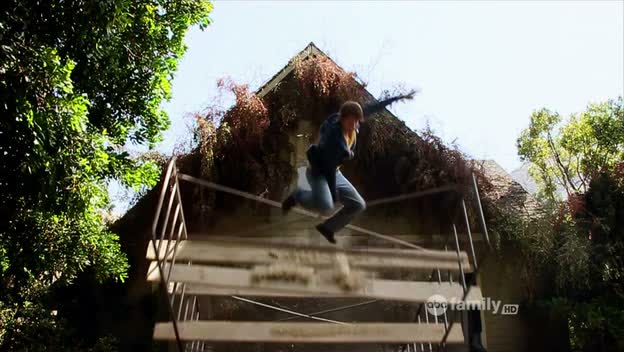 HUMPTY DUMPTY GOT HIS SHIT FUCKED UP BY BEING AN IDIOT

Toby doesn’t die even though I was totally crossing my fingers. I secretly hope A’s plan is to kill off all the male characters and any girl that doesn’t wanna bang Emily. Is that too much to ask? Either way Toby goes to the hospital where Wren is his doctor because Wren is the only doc in town. Spencer rushes in to the hospital room even though she’s a minor and has no blood relation to the patient. Jenna also showed up even though she’s a psychopath and exclusively speaks in a sexytime voice. Where the hell are this kid’s parents? Probably they’re like me and couldn’t care less about Toby since he’s awful. At least Spencer is having one of those wonderful moments where she dresses like someone finally took that giant stick out of her ass. Too bad the Staring at Stars dress she’s wearing is sold out. 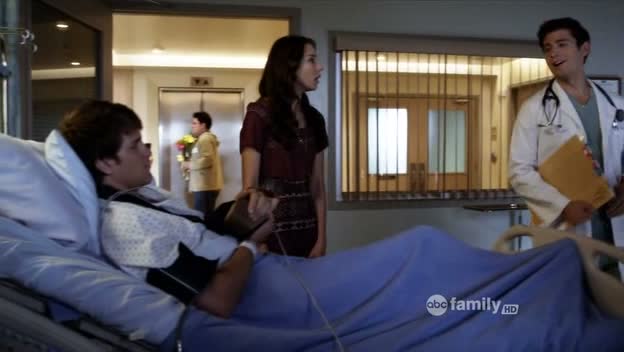 I LIKE YOUR OUTFIT TOO, TOBY, BUT WHEN I DRESS UP AS A FRIGID BITCH I TRY NOT TO LOOK SO CONSTIPATED

The other liars wait nervously for phone updates but more importantly, DAMN Emily looks good. The design team has been nailing the femme but queer look lately. Maybe this is just the flyfisherman father and the personalized rod with my name on it talking, but I am so into that green vest. 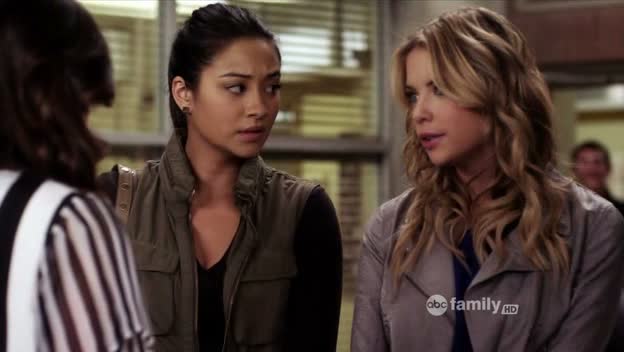 "NO HANNA, THAT'S NOT WHAT BOI DYKE MEANS"

I think the actual vest is from J. Crew mens two seasons ago. I suggest you go down to your local Goodwill or other cheap clothing store and buy a military style jacket and just cut the sleeves off. If you try to find this style of vest already in vest form, you’ll like end up with something short (like an actual fishing vest) or something puffy. Unfortunately on me this would look like someone I’d hooked up with forgot her vest at my apartment and I’m wearing it around in front of her for attention. But jeez, scope the attitude it gives Emily. Even Emily’s pony tail has some extra volume today.

After school, shit gets freaky when Emily shows up to the hospital just as Jenna is leaving. Jenna is all like, “yo I know you wanted a small town ride on Toby’s pogo stick before you moved to gay city” and Emily’s all like, “I don’t even know what the fuck that means but I’m still gonna beat this shit out of you” Emily also calls Jenna’s cane “that stick” and I couldn’t decide if that was like, um, offensive. 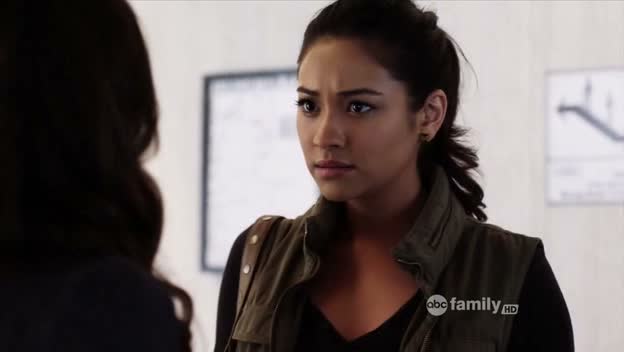 Whatever Jenna said stuck with Spencer because she talks Emily in to breaking up with Toby for her. Spencer decides she just loves Toby too much and has to protect him by breaking up with him. I hate Toby, but when did Spencer become Ms. Can’t Handle Her Own Shit? Also, between the vest and telling Jenna to shove her cane up her ass you’d think Emily was so pumped up with badassness that she wouldn’t be such a goddamn pushover and actually go through with it. Gosh. 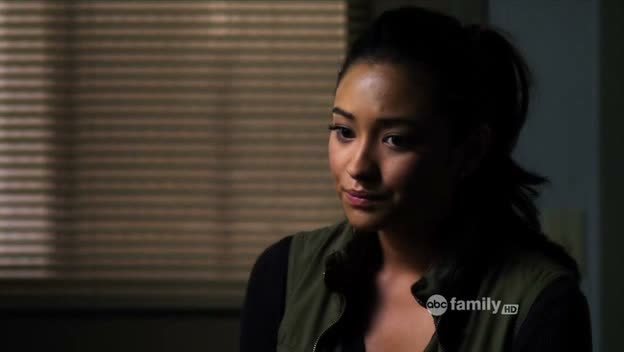 LISTEN KID, YOUR RELATIONSHIP IS OVER BUT THAT'S OKAY BECAUSE MINE HAVE BARELY STARTED.

So whatever that sucked. Meanwhile Aria and Holden go on another fake date. Holden goes off to God knows where but not before giving us official confirmation (both verbal and booty checking) that he’s not gay. Obviously a TV show can’t have TWO gay characters. Nuh Uh. So Definitely Straight Holden skips off probably to sell drugs or participate in an illegal dog fighting ring or maybe to take cooking classes and we follow Aria as she sits at a bus stop waiting to see if Ezra will show his pretty face. 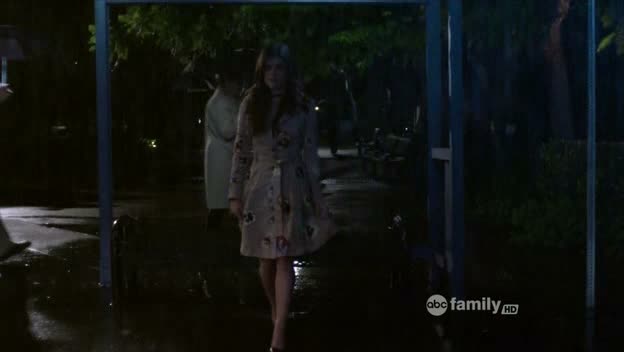 We never get to see what cute and/or hideous outfit Aria might have sported for her faux date because it’s raining so she’s wearing a freaking adorable Anthropologie Elevenses trenchcoat. I remember when that coat was in stores, but Pretty Little Liars was filmed months ago so it’s no longer being carried at Anthropologie. Luckily, you can still buy it on eBay which I might just go do. I know I can fall in to the habit on constantly buying black coats, but it’s nice to have a coat with a pattern or interesting detail on it occasionally. If you live in an area that gets a ton of rain in the spring or fall, a colorful or patterned trench is a nice alternative to have to your usual Patagonia style raincoat. 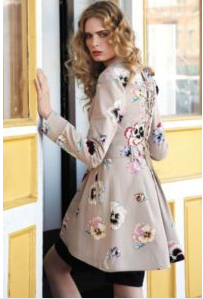 ONLY AVAILABLE BY RIP OFF ON EBAY

So Ezra shows up like a knight in shining armer and/or that older guy with a driver’s license and they kiss dramatically in the rain exactly like the last time they kissed dramatically which was basically every episode. 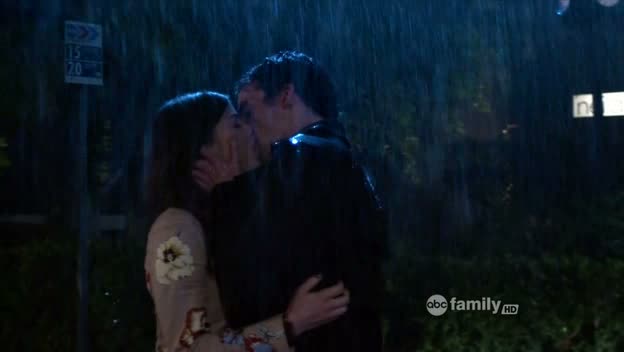 THIS KISS THIS KISS, ITS CRIMINAL

I get the message, straight people love knows no boundaries or laws. I get it. Of course, before they can consummate their love with a few more church-tongue kisses, Ezra wants to make sure that this is what Aria absolutely wants because he loves her and wants to protect her from harm even if that means they can’t be together. Aria declares that nothing in the world matters as much as a relationship when you’re sixteen and tells Ezra she’s concocted a plan to protect him and keep him safe. I THINK I’M SEEING A TREND HERE.

Of course, since Hanna, Spencer and Aria have all had their big relationship fights/break-ups/climaxes/kisses it’s time for Emily’s big scene with– just kidding. That didn’t happen. 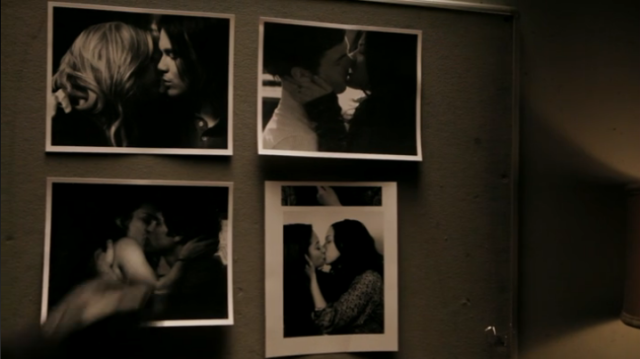 IS THIS WHAT EQUALITY IS SUPPOSED TO LOOK LIKE? 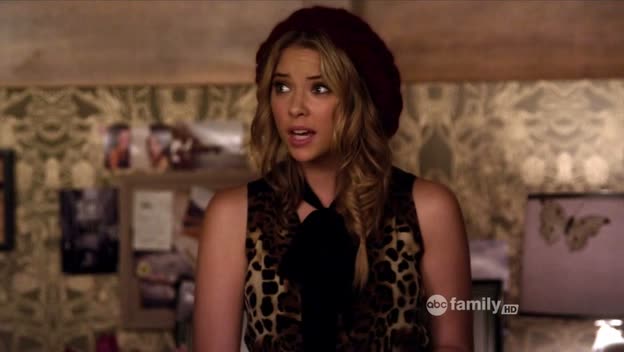 SOMEONE SHOULD BE FIRED FOR THIS 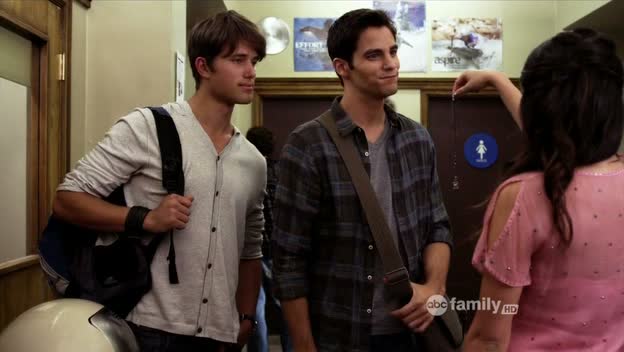 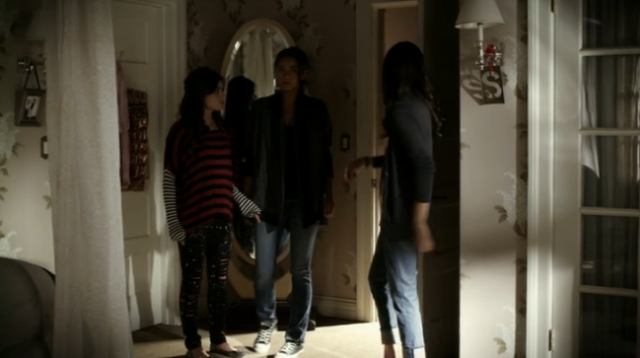