Much like Brittani, I spent a fair bit of my childhood re-enacting 90s television shows. When I wasn’t dreaming about winning a trip to Space Camp I was corralling neighborhood kids away from Barbie Dreamhouses and into backyard obstacle courses.

Luckily Halloween offers the chance to relive those glory days when getting slimed and impressing Marc Summers were realistic life goals. Throwback costumes are huge hits at Halloween parties and make for pretty simple DIY projects. Do them right, and you’ll be the coolest queer at the party — assuming the the other guests grew up in the 90s too. If they didn’t, be prepared to spend the evening trying to explain the concept of the Aggro Crag to baby gays who think you’re a mountain climber. It’s impossible, trust me.

So let’s talk about some costume ideas that would impress your childhood self and ’90s lesbian brethren all the same. 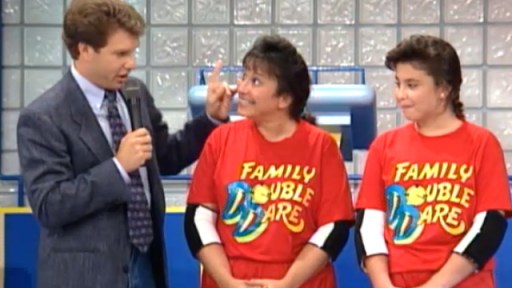 This could be you but with better hair

In college my friend and I needed last-minute costumes for a Halloween party and decided to go as a Double Dare team. The best thing about this outfit is that any of the supplies you don’t already own can probably be found in your parents’ basement, the Salvation Army or borrowed from a friend. 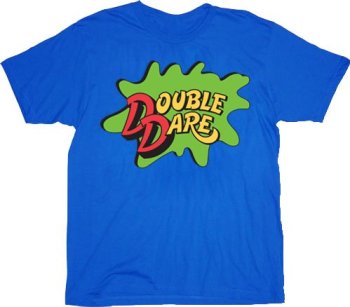 The only craftiness required is for the t-shirt making and even that is pretty simple. I used an iron-on transfer to put the Double Dare logo on a plain blue shirt. It turned out fine, just make sure your shirt is light enough for color transfers to show up or get some made specifically for darker shirts. If you’re looking for a higher level of difficulty you could stencil on the logo or use puffy paint for an ultimate homage to the 90s. If you’re not crafty but want to look super official you can buy a Double Dare logo tee shirt

from Amazon for $15-20. Once you have your shirt logo-ed up and matching pants (or shorts) you’re basically set. For props, my friend and I drew a red line around the top of a clear plastic cup made up nonsensical games involving ping pong balls. The helmet, knee, elbow pads and goggles will come in handy for physical challenges like preventing spilled drinks from getting in your eyes and avoiding injuries associated with drunkenly stumbling out of the bar in search of late night burrito. 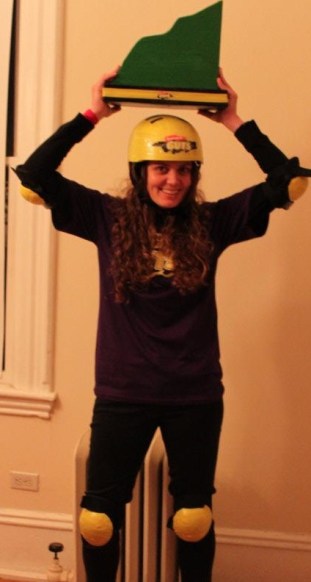 Carrie “the Panther” from Portugal, definitely not me on halloween last year

The GUTS costume takes about the same amount of equipment as the Double Dare costume plus electrical tape. After failing hard at sewing a yellow helmet cover out of cloth, I ended up covering my bike helmet, elbow and knee pads in yellow electrical tape. Contact paper would work just as well though it tends to be slightly more expensive. Just like Double Dare, GUTS replica tees

can be found online if you’re not up for making your own.

For the GUTS trophy (a.k.a a piece of the Crag), I cut up thick styrofoam and covered it in green and black electrical tape. Again, contact paper would work too as would cardboard and paint if you’re artsy enough. Unfortunately, I was working on this costume late in the game and didn’t even have time to let paint dry. I also printed off a few GUTS logos and to put on my helmet and the trophy. That’s really all it takes. Bonus points if you can convince a friend to go as Mo or Mike O’Malley/Burt Hummel. 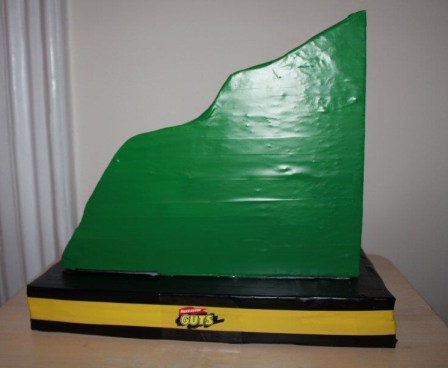 this is still on display at my apartment

This year, my friends and I are doing a TMNT re-imagination. We’re aiming for comfortable costumes but still want to be recognizable as the fearless and loveable sewer-dwelling reptiles. We’re steering clear of bulky suits and hyper-feminine outfits (read: shiny green skirts) which means we’re essentially dressing like the Saudi Arabian soccer team and converting backpacks into shells using green fabric and paper mache. Someone just volunteered to go as April, so I have high hopes for this year. This is still a work in progress but I’ve included our supplies list below and will post an update with instructions as the costumes come together. 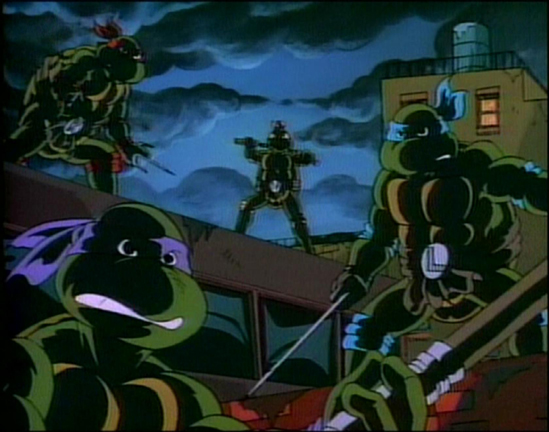 Remember Pete & Pete? The badass gingers are probably the 90s characters most aligned with stereotypical lesbian fashion (okay, Alex Mack, we see you too). You’ll need a red checkered shirt, blue jeans and red hair. For maximum authenticity get yourself a Petunia tattoo and find a dapper queer to dress as Artie. 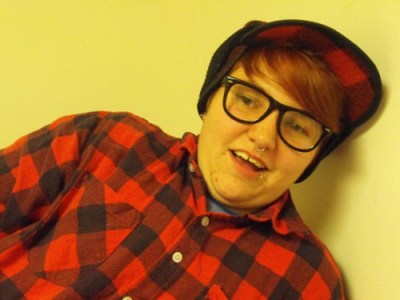 Legends of the Hidden Temple Contestant

Another 90s Nickelodeon staple, Legends of the Hidden Temple was basically a marriage of Indiana Jones and American Gladiators for kids. This costume requires same supplies as GUTS and Double Dare, but swap in a Legends tee shirt

and paint your helmet gold. Olmec would be proud. 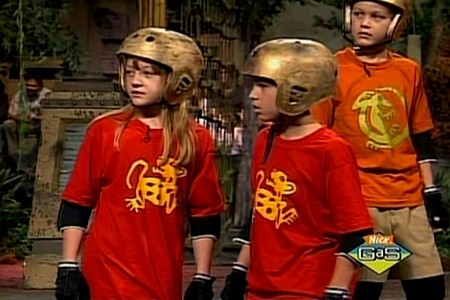 Clarissa from Clarissa Explains It All

Clarissa was my first style icon. I also felt like we lived parallel lives because she was the only girl I knew who also owned a skateboard and was totally content being “just friends” with the boy next door. “The Clarissa” is open to interpretation as long as you wear colorful baggy clothes and lots denim. If you add a grandma cardigan and a hat with a flower you’re basically Blossom so there’s that option too. 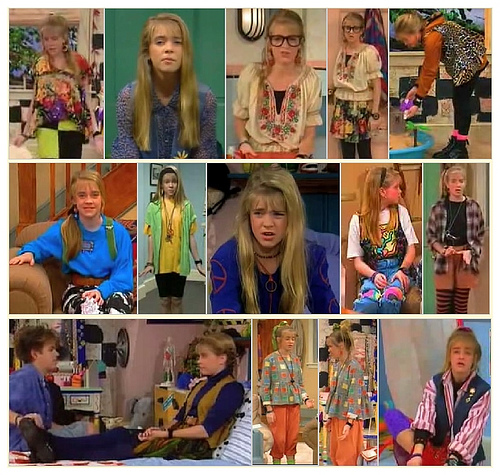 I remember being a huge snob when Carmen Sandiego made the jump from popular computer game to game show. I complained that it was “dumbed down” for tv and had nothing to do with the original vision of the game I’d logged hundreds of hours on when I should’ve been socializing with my peers. Even so, it didn’t take long for me to get hooked. I mean, she was basically a cooler version of Waldo and the show encompassed my career goal at the time: To be a world traveler specializing in mystery and geography. 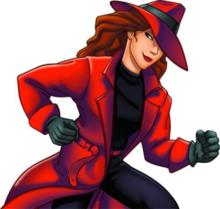 All you really need for a Carmen Sandiego costume is a red trenchcoat, a red hat and black gloves. Then proceed being the coolest bitch on the block — or run and hide — depending on how much you want to get into character. One note for authenticity geeks, old school school Carmen Sandiego has a yellow stripe on her hat but in more recent depictions it’s black so that’s your call. Thrift stores and Salvation Army should have what you’re looking for for cheap. I love this costume because it can really be butched or femmed up depending on your style.

Do you have favorite 90s TV costumes? Do you know how to dress like a Hey Dude! character without looking like a common cowboy? And why couldn’t anyone ever get past the Shrine of the Silver Monkey?