On the heels of Phoenix Suns owner Rick Welts coming out, former Villanova forward Will Sheridan embraced his homosexy on ESPN’s Outside the Lines. His announcement came a day after Welts’, assuring the world that there is indeed enough gay thunder to go around.

An accompanying ESPN article that covers his experience on a top-ranked Division I basketball team quotes Sheridan:

I’m trying to have a voice, and I want that voice to reach as many people as it can…I mean, look at me. I’m black. I’m gay. I’m like a quadruple minority, and I feel like a little piece of me resides in everybody. Maybe there’s a kid out there who doesn’t think he’s OK, and he can look at me and say, ‘OK, he played college basketball. He went overseas. He has a music career and now he’s living his life. Now he’s who he wants to be and he’s happy and confident and comfortable.’ It’s my responsibility to talk about that.

Sheridan’s story is one of acceptance through indifference; he stresses that the main concern of his teammates was that he was there to win. Mike Nardi, his roommate and the first teammate he told, spoke on the team’s collective disinterest:

Your personal life is your personal life. It didn’t matter to us because it’s family, and you don’t go putting your family’s secrets out in the streets. I mean, why would I tell anyone? It’s no one’s business except Will’s.

Despite Nardi’s initial reaction of making a joke about Sheridan abstaining from hitting on him or sniffing his underwear, (Is that a thing? Do people really do that?) his and the rest of the team’s stance shows why a college sports team could be an okay place to come out. Those who assume the locker room would become a place of awkwardness and uneasiness underestimate the bond that forms through college sports. Sure there are still idiots out there that might be uncomfortable with being on a team with a gay guy but I think the problems with coming out as a student-athlete are much more likely to come from external factors. The fans, coaches, administration, other students, recruits, parents, opposing team’s fans, and broadcasters could be the real threat. 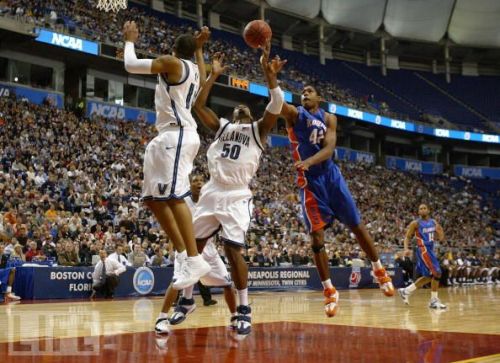 The precarious situation of students that depend on scholarships for their education predicates their compliance as a commodity with the school (and even the NCAA) as the brand. The issue with student-athletes coming out reaches far beyond the scope of team chemistry and reaches into personal safety and well-being. Will does not speak of any times he felt personally threatened but he does recall the taunts and jeers of opposing teams using his sexuality as ammunition.

At first, I was like, ‘My grandma is sitting right there.’ And as a human being you feel it when people say nasty things. But then I thought, ‘That’s just stupid. If you were gay, you’d like to do [those things], too.”

While Sheridan received support where some least expect it, he took flack at home. When he came out at the end of his freshman season, his father stopped speaking to him and cut him off financially. Eventually the pair reconciled. And by “reconciled” I mean his father hopes that his son will come to his senses and stop leading a homosexual lifestyle.

For now, that doesn’t seem to be in the cards. Sheridan now works at a manager at a fashion retailer and is embarking on a career as a musical artist.

He’s released a video for a song I think would play in a gay club and everyone else would know the words or at least recognize the song but I wouldn’t and I’d feel bad, temporarily for not dancing and that would be closely followed by a headache and then I would just wanna go home.

College athletes are, by rule, about the same age and representative of one particular generation. Whereas professional sports might still feel hostile to gay players, will things start to change as more of this generation graduates into the NBA?

It’s great to hear the story of a guy who was somewhat out while competing and lived through it, but is his experience typical? What kind of impact could this have? Is coming out still too big of a risk for college athletes performing on a national stage?