In the latest issue of our favorite comic about our favorite campers at Miss Quinzella Thiskwin Penniquiqul Thistle Crumpet’s Camp for Hardcore Lady Types, we pick up right where we left off last time. Mal and Molly are still trapped in the dinosaur-, weird plant- and temple ruin-filled world with the Bear Woman; Jo, April and Ripley are off trying to earn “regular” merit badges. They’re all still trying to figure out their summers now that they don’t have Greek deities to deal with. 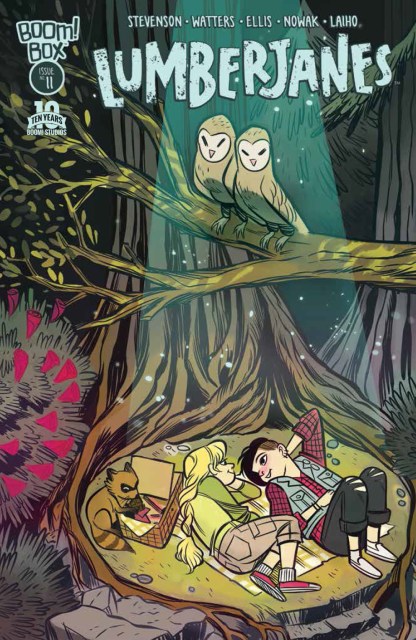 Okay, first things first, this is the most freaking adorable cover to a comic book I have ever seen in my life. And the inside of the comic is just as cute! What’s best about all of this, though, is that despite being wonderfully cute, it’s never cloyingly cute. The writers and artists know just how much sugar and flower petals they can add to the recipe before it gets annoying and they stop right there.

At the beginning of the issue, we learn that when Mal and Molly jumped through the portal, they split “the dang thing,” and so according to the Bear Woman, it could takes weeks or even months to figure out where the exit is. To say the least, Mal and Molly are kind of freaking out a little (or rather, Mal is). Mal thinks that she’s too much of a wimp to handle this. Back home she’s the tough kid, but here, she feels like a coward. Molly says she’s the opposite, that back home she doesn’t really have any friends or any life and that at camp she’s free to reach her full potential. They realize that together, they’re both brave enough to accomplish anything. Again, this is all very adorable. 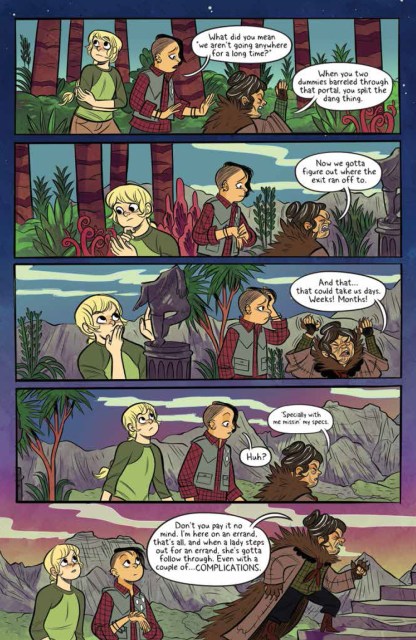 April, Jo and Ripley are back at camp trying to earn their merit badges, but this time instead of just reading the puntastic names, we get to see the campers in action trying to earn these badges. First up is “Absence Makes the Heart Grow Fondant” with a really cute tattooed short-haired baker. After that ends disastrously for April and Jo, and ends with Ripley getting a new badge, they try their hands at “Watching Paint Dry” which doesn’t go any better. Then Jen is back! And although she admits she loves the girls from Roanoke cabin, she’s not going to be able to help them today. So, left to their own devices, they calamity their way through a handful of other attempts at “easy” merit badges.

Now let’s pause for a minute. Can we please talk about April and Jo ballroom dancing together? And April wearing a tux! How gosh darn incredible! It’s like every month I think Lumberjanes has given me everything I could ask for in a comic and then they keep on delivering more and more things I never knew I needed from an all-ages comic!

The comic ends with Mal and Molly putting on their determined faces and getting ready to go home. I’m really excited to see how this storyline wraps up. Mal and Molly have a super great dynamic together and it’s going to be great to see them working together to accomplish this goal. Also, I can’t wait to see what other kinds of trouble the others get themselves into. I’m sure I’m not the only one, but I am really dang glad that Lumberjanes got picked up for more than just the initial eight issue run. It hasn’t lost a step and in fact, looks like it could soon outpace itself. 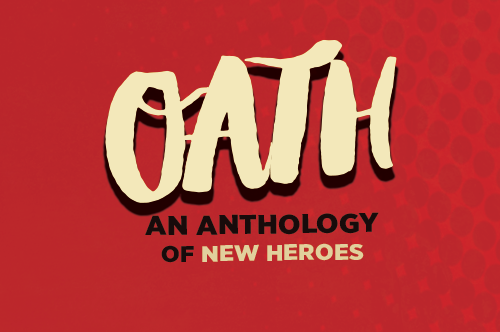 If you’re looking for more comics about queer characters, you should also be paying attention to the recently announced Oath: An Anthology of New Heroes. According to their “about” page, Oath is “a black and white superhero comic and prose anthology made by queer creators, as a reaction and response to the portrayal (and lack of portrayal) of diversity in superhero genre.” Oath will be an anthology of stories about LGBTQ superheroes at the moment they decide to be a superhero, when they take an oath to devote themselves to their cause. They currently have a lineup that includes Sfé R Monster and Mildred Louis, two creators who have been featured in this comic as well as others like Kori Michele, Audrey Redpath and Genue Revuelta, Taneka Stotts and Christianne Goudreau, Adriana Ferguson and Kristen Van Dam and Alexandria Law and are currently open for submissions for comic pitches until March 21 and prose pitches until April 15. More information about what kinds of stories they’re looking for and what the rules are can be found online.