In a strange land, the land of “conversion therapy” and “cures,” a civil war is brewing. As Amanda Marcotte reported yesterday in Slate, several groups within the ex-gay movement have officially backed away from curative therapy, and are now promoting quiet, shameful returns to the closet — in order to, apparently, stay relevant in today’s rapidly evolving attitudes towards the queer community. 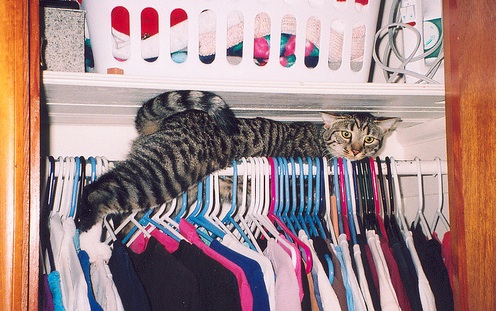 This shift in strategy is predominantly led by Exodus International, the country’s most well-known ex-gay Christian ministry. So that their mission — “Mobilizing the body of Christ to minister grace and truth to a world impacted by homosexuality” — can be carried out in the most politically expedient way possible, Exodus is re-branding. Exodus president Alan Chambers announced back in June that claiming to be able to cure homosexuality is “as bizarre as someone saying they can cure any other common temptation or struggle that anyone faces on Planet Earth.” Chambers has allegedly gotten rid of ex-gay books from the Exodus online bookstore, and is working to discourage others from promoting it.

Instead, Chambers is officially promoting alternative solutions, like celibacy, or “finding an understanding opposite-sex partner,” which is what he has chosen to do, telling the Associated Press that his marriage is the best one he knows of. He says, “It’s an amazing thing, yet I do have same-sex attractions. Those things don’t overwhelm me or my marriage; they are something that informs me like any other struggle I might bring to the table.” It sounds like a lose/lose situation to me, but anyway. This is apparently a progressive twist on the philosophy that homosexuality can and should be cured, because it acknowledges that same-sex attraction can’t be prayed away.

Mormons within the ex-gay movement are following suit, suggesting that instead of telling young people not to be gay, supportive family members should instead tell their kids to simply not act on their gay identity.

Not everyone in the right is getting behind the “closet-not-cure” route. Its flaws — like the fact that to re-enter the closet means a life of emotional suffering with no hope for fulfilling sexual experiences — are surprisingly obvious to Team Gay Cure. In response to Exodus’s re-branding, members of Team Cure launched the ironically titled Restored Hope Network, which held a conference this past weekend to get the show on the road. The core of the Restored Hope Network’s position is that though queers are “sexually and relationally broken,” we can actually be fully cured of our sinful desires, restored to the fulfilling heterosexual lifestyle that these people have deemed appropriate, normal and good. It’s a counterargument to Team Closet, though both sides are promoting an emotional death sentence.

This is all very infuriating and depressing, but sometimes it’s important to check in with people who actively oppose equal, healthy relationships for queer people, and understand what the people who want to set us back are thinking. The important thing is that even though Team Closet understands itself to be progressive and compassionate in mission, its goals are based on the same fundamental understandings of its predecessor, Team Cure. Both teams think that they have the right to define how other people should exist, and each one thinks that they have a superior way to attain a queer-free world – or at least one where all queers get to go to Heaven despite their shameful, dirty feelings. Hopefully the public will recognize the absurdity of both these ideas and view this schism as a last ditch effort of a sad, dying movement.

In the end, the semantics of the argument are relatively inconsequential. What matters is that we, as a community, continue to promote messages of equality, and offer support and hope to those people who are being told by the people around them that they are broken.