Some months I know exactly what game I want to tell you all about way ahead of time. Things I get excited about include but are not limited to: murdering men, romancing women, amassing wealth beyond measure, and basically anything to do with space. When something comes out that fits any combination of those criteria I have the date seared in my brain and I buy it and I play it with a sense of purpose and life is a well-oiled machine where the things I do for fun and the things I can get paid for are so close together that they hug each other and we all laugh and laugh. 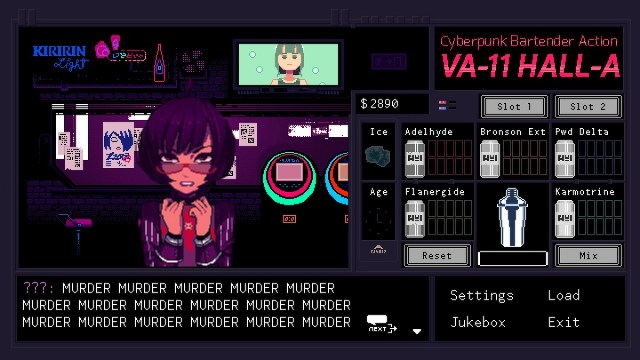 Things I Get Excited About

This was not one of those months. Nothing came out recently that really seemed interesting or relevant. I did pick up Wolfenstein 2 on sale, and shooting nazis in the face seems like an excellent time for sure, but you also have to play as a man and I don’t feel like writing about that. Maybe it’s a great game, and if it is I will probably tell you so in a paragraph like this one at a later date as part of an extended intro to whatever game I actually am writing about that month. So, look forward to that I guess. I also picked up NBA 2k18, and that’s fun in the way that series is fun every year, but who cares? Not me. And not just because my layups are not falling when they really ought to be falling.

So, at a loss, I reached into my bag of bad decisions, which is another name for my Steam library because it has hundreds of games in it that I spent money on and then forgot about forever, and pulled out VA11 Hall-A: Cyberpunk Bartender Action. (From here on out I’m going to call it Valhalla, because that’s what the game calls itself most of the time anyway and it’s a lot easier to type.) I bought this game whenever Dream Daddy came out, which I know because somebody told me about it when I was talking about Dream Daddy. What they told me about it was “It is gay.” Sold. And then never played. Until now! 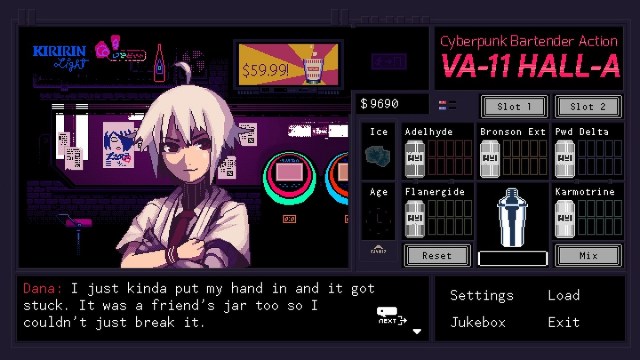 Well I’ll tell you one thing, this game is not great for escapism. You play as Jill, a bartender in a cyberpunk town called Glitch City. And when I say you “play” as her, I am being pretty loose. There isn’t much game in this game. It’s mostly visual novel, but you have to mix people drinks while they talk to you and you occasionally get to choose where to spend your money. The main choice in this game are whether to serve people the drinks they asked for or not. So the gameplay is listening to people with more interesting lives than yours talk about their adventures while you do tedious labor and then struggle to pay your bills. It’s a real fantasyland.

It is definitely gay though. My partner’s coworker did not lie to me about that. Jill has a crush on her boss, Dana, and, predictably, so do I. She also has an ex-girlfriend that’s a whole tropey plot of its own. There’s a gay biker boy and a lesbian veterinarian who works at a company owned and run by dogs. There’s also Dorothy, an android sex worker who chooses to look like a child, because this is cyberpunk and cyberpunk kinda always goes to the grossest places. She calls Jill “Honey” and so I mostly imagined her as Karen from Will & Grace and that made the whole thing more confusing but also less upsetting. I don’t know. 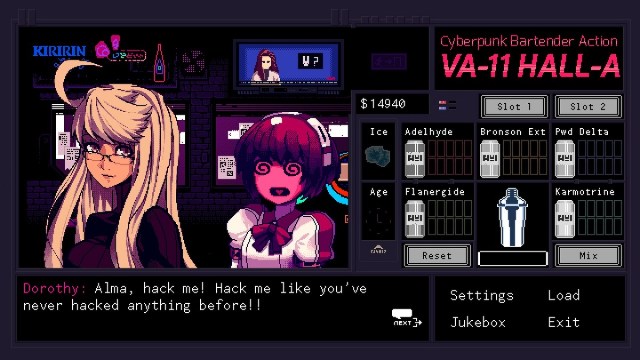 I did feel with some of the plotlines that the game was making assumptions about my values in an uncomfortable way. Like, with the aforementioned Dorothy, we were meant to learn throughout the game not to judge her for her job, which I wasn’t judging her for in the first place. And then another customer, Alma, a hacker who becomes a good friend of Jill’s over the course of the game, goes on a rant about how one of her sisters just got out of an abusive relationship and is now acting like a “slut” and a “whore,” and it was really jarring and not at all in line with the gentler-than-it-seems tone of the rest of the game. Like, there are a couple gross dude characters, but they are supposed to be awful and everybody acknowledges that. And there are a lot of women in the game, all with different jobs and backgrounds and lifestyles, and they are mostly excellent characters and the game mostly seems to want us to celebrate them? But then suddenly we’re angry at “slutty” domestic violence survivors and the person saying these things is never called out or presented as anything other than a good person. It was one scene in a surprisingly long game (my playthrough took 8 hours) but it was very memorable. There were some other lines of dialogue that occasionally seemed off to me but I was reading through them super fast that by the time I’d think “Wait what?” I’d already be three slides past it. 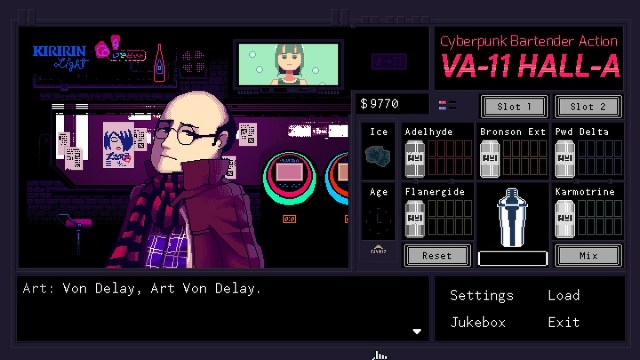 There are also multiple Seinfeld references for some reason?

But for the most part, the characters are great. The story and the world only get more interesting as the game goes on, and as storylines start to weave together. But I think the only way to get answers to a lot of the mysteries of the game is to serve specific drinks to specific people at specific times that were not specifically obvious to me, so I don’t really know how a lot of things turned out, except that in the end I got evicted from my apartment and moved in with the the one character I did not want to end up with. So now I need to look up how to bartend in such a way that will make me end up with my dreamy ex-pro wrestler boss Dana who gives me bonuses every day and hires Dorothy to hug me all night when I am sad. 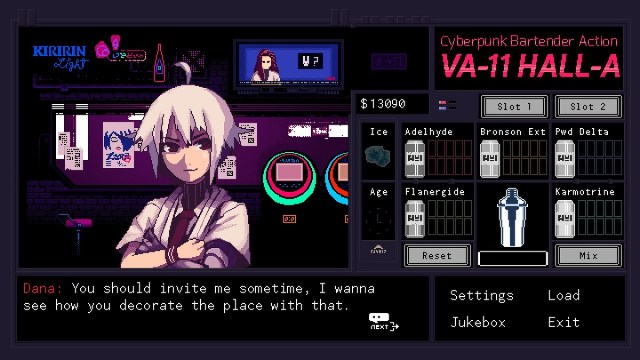 There are a lot of plotlines happening all at once and all essentially in the background. Assassins hunting assassins, people who are not who they claim to be, corruption around every corner, Who Watches The Watchmen etc. It’s kind of like “The Zeppo” episode of Buffy, with the added bonus of not being about Xander Harris. 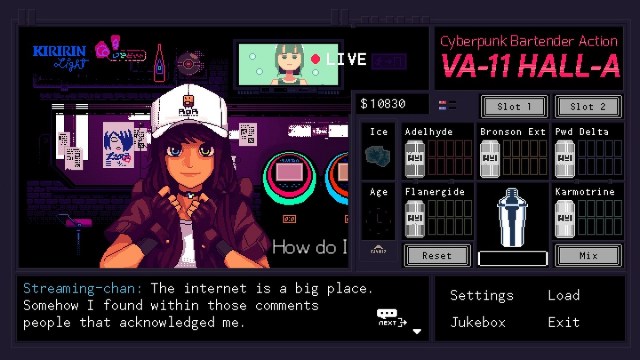 Valhalla is $15 for Windows, Mac or Linux. I think the price is pretty fair; if you like visual novels this is definitely a good entry to that genre. But it’s also more than a year old so if you wait for a sale you can probably get it for cheaper, and a penny saved is a penny earned apparently, so maybe do that. But definitely, no matter what, look up the soundtrack on Spotify for free.