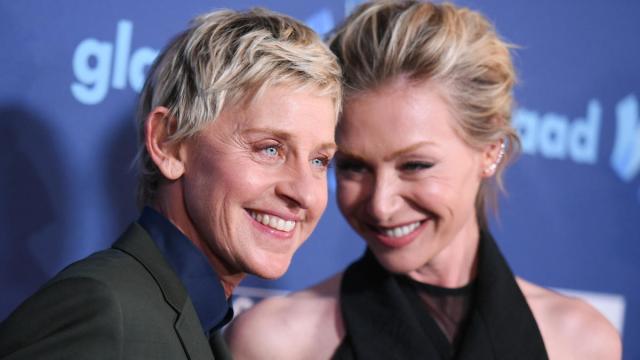 + It turns out that Ellen DeGeneres did more to influence Americans’ attitudes about gay rights than any other celebrity or public figure. I’ve been a fan of Ellen since Day One and her journey is one of many that just blows my mind.

+ The Vampire Diaries, a show I have never seen, will debut a LETHAL LESBIAN for Season Seven, according to casting notices picked up by TV Line:

First up are Nora and Mary Louise, a dangerous duo of down-low lovers with murderous tendencies. The vampires, both turned in their mid-20s, have kept their relationship a secret for more than a century, and although their connection is clear to those able to infiltrate their inner circle, Mary Louise’s constant doting can sometimes feel a bit smothery for fiery Nora’s liking. Still, anyone foolish enough to cross either of them will feel both their wraths.

+ Scream, a new show with a queer character played by Bex Taylor-Klaus, debuted last night. Gawker says that it was really awful, noting that “Aside from the motormouth genius (the show’s de facto narrator) and the lesbian, the characters are indistinct, poorly acted, and their lines are mumbled at least half the time.” AfterEllen talked to Bex all about it:

AE: You have played a lot of LGBT characters—how is this one different for you?

BTK: I’ve had the opportunity to play lesbian and gender-queer in the past, and those characters have been secure in who they were. Audrey is still finding her way, figuring out who she is and who she loves. It’s great being able to dive into that. I want questioning or bi curious kids to also see good representation in the media and know that it’s perfectly okay to not be sure who or what you are yet. It’s okay to be working it out.

+ It’s time for a LESBIAN Peppa Pig: “More gay characters are needed on children’s television to send out the message same sex relationships are of ‘equal value’ to any other, Lib Dem leadership contender Norman Lamb has said.”

+ Amber Rose and Blac Chyna Kissed at the BET Awards to “Celebrate Marriage Equality”. Any excuse to kiss a girl, amirite? By the way, The BET Awards were hella gay.

+ BREATHE is a movie that you probably will wish was a lesbian movie but will like regardless:

+ THEY’RE MAKING A SEQUEL TO WELCOME TO THE DOLLHOUSE, which is one of my top five favorite movies of all time. Even though whenever I tell people that, they tell me that I am a “sick puppy.” I have seen it 10,000 times. However, I’m a bit confused about why (out actress) Heather Matarazzo isn’t playing the grown-up version of Heather Matarazzo’s character? Also where the hell is Brendan Sexton III (aka Warren)? So, here’s the scoop:

The film is a follow-up to Solondz’s 1996 drama “Welcome to the Dollhouse,” in which the main character, Dawn Wiener — played by Heather Matarazzo — was teased with the nickname “Wiener Dog.” The castings of Gerwig, who will be playing the adult version of Dawn Weiner, and Delpy had been previously announced.

+ “Freeheld,” the story of a lesbian couple fighting to keep their pension benefits after one falls terminally ill, stars Ellen Page and Julienne Moore and is apparently “struggling to be commercial.” Ellen Page told Variety that “There’s this awful bias that women can’t carry films, which is being proven not true. Hopefully that will start to change.”

+ Female-Driven Movies make more money because women are better than everybody else all the time Amen.

+ The producer of The Hunger Games says we need more than a gay superhero: “The reality is that diversity as an overall subject has to continue to be addressed onscreen. That goes beyond having a gay superhero. There should be a black superhero, a Latino superhero and, while we’re at it, we still aren’t seeing nearly enough women behind the scenes and as the anchors of movies. ”

+ Is the music industry purging its record of homophobia? “Even genres driven by displays of outsized masculinity — heavy metal and hip-hop — have largely purged homophobia. Metal had a crisis of conscience after the coming-out of Judas Priest frontman Rob Halford, while rappers like Kanye West and Drake have worked to forge a more enlightened image for hip-hop.”

+ Trans Indie Rocker Isley Reust talks about her new album with her all-female band Spectacular Spectacular and her recovery from addiction.

+ Here, it’s a music video from Hayley Kiyoko called “Girls Like Girls” and it’s about girls who fall for each other. You know, in a GAY WAY. It’s also weird but also very cute.